‘Insta-fit’ digital influencers like Kayla Itsines with their healthy posts on exercise, food and feel-goodness are part of a seismic shift targeting the insides of our bodies.

‘Insta-fit’ digital influencers like Kayla Itsines with their healthy posts on exercise, food and feel-goodness are part of a seismic shift targeting the insides of our bodies.

ADELAIDE, Australia — Last month in Hamburg, fitness guru Kayla Itsines was on a stage in front of 7,500 eager attendees of the OMR (Online Marketing Rockstars) conference. Most of us settle for seeing her no larger than an iPhone screen, for the lithe Australian with super-toned abs, often on show between skimpy shorts and sports bras, as well as a seemingly ever-cheery disposition, is the queen of Insta-fitness with 9.3 million followers on Instagram alone. At the age of just 26, she has topped the fitness category of Forbes Top Influencers List and appeared on Australia’s Young Rich List (for entrepreneurs aged 40 and under) compiled by the Australian Financial Review; this year she leapt 11 places to number 40 with an estimated worth of AUS$46 million ($35.2 million).

“I don’t think of this as a business,” said Itsines just two years ago at an Apple store event in New York during an Adidas-sponsored tour; entire stadiums were filled with adoring fans (#kaylasarmy) following her lead through some of her famous Bikini Body Guide (BBG) moves. Yet her company turns over an estimated A$100 million ($76.755 million) per year, most of which is generated by A$19.99/month ($15.30) app subscriptions. According to latest figures from App Annie, Itsines’ Sweat is ranked in the top five health and fitness apps in the US.

It all started innocently enough. As an 18-year-old Adelaide-based personal trainer, Itsines was left in charge of the gym where she worked. She started training women and targeting the body areas they found hardest to change, then posted before-and-after shots on her Instagram feed. Cue customers. Cue followers. Cue demand for the launch of her Bikini Body Guides for non-IRL clients, and a fitness community that sprung up around them all sharing the #BBG hashtag, cheering each other on while Kayla gives shout-outs by regramming successful transformations on her own Instagram account. The guides, originally PDF downloads, became apps with full video instruction and now incorporate fitness programmes by Sjana Elise Earp and Kelsey Wells for yoga and post-pregnancy programmes — all packaged under the umbrella of Sweat, the business run by Itsines and Tobi Pearce, her life partner and chief executive. 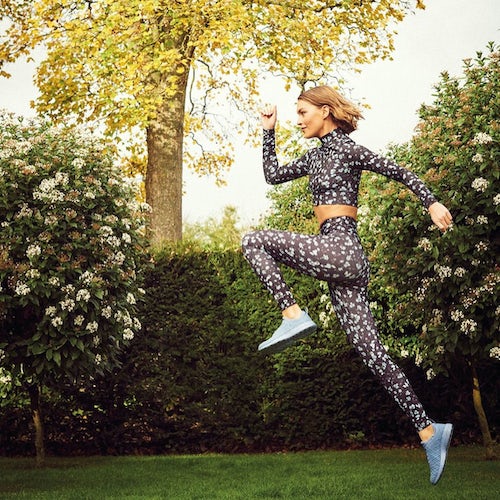 Of course, it isn’t all roses. BBG has had its share of complaints, chiefly from users finding it hard to stop direct debits from the app after they’ve cancelled their monthly subscription. And, of course, there have been social concerns about young girls being overly influenced by influencers and finding “thinspiration” in their posts.

But Itsines and Pearce aren’t alone in their ambitions to tap the growing intersection of fitness and digital influence and, though the couple continue to self-fund their business, investors have taken notice. Fellow Australian, Gold Coast-based model-turned-trainer Emily Skye has 2.3 million followers on Instagram and recently sold part of her health and fitness business to Quadrant Private Equity, which also owns gym chains including Goodlife Health Clubs and Fitness First Australia. Industry insiders believe they’ll be aiming to float on the stock exchange later this year. Welleco, the wellness and fitness shake brand founded by Elle Macpherson and former magazine editor Andrea Horwood, had initial seed investment from Hoperidge Capital, the family investment firm of Perth-based education entrepreneur Rod Jones, and recently private equity firm The Foundry has taken a stake. James Duigan, the London-based Australian behind Bodyism fitness and the Clean and Lean food books, secured a multi-million-dollar investment from Doğuş Group, an investment holdings fund, in 2016 that helped to finance his standalone gym and café in West London.

Social media has become a space where fitness, sport, health and beauty come together in one beautifully curated Instagram stream.

Indeed, these Insta-fitties, with their healthy posts that cover exercise, food and general feel-goodness, are part of a seismic shift in the global beauty industry. Yes, beauty brands are increasingly tapping online communities to sell product. But it’s more than that.

“Social media has become a space where fitness, sport, health and beauty come together in one beautifully curated Instagram stream,” says Victoria Buchanan, strategic researcher at Future Laboratory. “Fitness and wellness gurus such as “Get The Glow” author Madeleine Shaw and actress-turned-wellness guru Gwyneth Paltrow show their fans not only information on the sector they are known for, but also all aspects of their lifestyles. Fitness shots interspersed with images of açaí bowls and beauty masks highlight how a healthy regime now includes a clean beauty routine.”

Elsewhere, health “cures” such as fasting at the Mayr clinic in Austria have become as much de rigueur for the complexion as for the gut. Since the VivaMayr opened its London outpost in April last year, the appointment book has been full and waiting lists long. Beauty editor-turned-influencer Alessandra Steinherr is a devotee of Viva Mayr Altaussee and finds lately that her followers are interested to hear more about it. “There are no negative comments about it now. People are more aware of the whole gut-beauty connection,” she says. “I feel I look five to seven years younger after I’ve been. My face loses its puffiness: it’s as though it’s been shrink-wrapped, the skin is much tighter.” She may be a product junkie “but no face cream can do that.”

“Beauty, once thought to be a category that focused on skincare, is becoming integrated into the umbrella term of wellness,” explains Buchanan. “This is growing out of a dire need for an alternative to the reactive model of skincare. Everything from skincare to gut health is focused on being proactive and preventative, rather than just being reactive.”

According to the Global Wellness Institute, the health and wellness market was valued at $3.4 trillion in 2014 and is growing by 12 percent each year — and outpacing the pharmaceutical sector in terms of sales figures. And consider too that Persistence Market Research values the beauty supplement market at around $4.7 billion with a compound annual growth rate of 6.8 percent between 2018 and 2026.

This has meant a rise in beauty vitamin ranges and those targeted specifically at women, such as US-based Ritual and Lumity Life, a brand founded by former telecoms billionaire Richard Emanuel. After meeting Cambridge PhD Dr Sara Palmer Hussey, who had been researching longevity in the blue zones (regions around the world where lifestyle makes longevity higher, including Sardinia in Italy and Okinawa Island in Japan), they decided to collaborate on a vitamin range for women. “Initially there was no planned commercial intent but the feedback from our consumer trial indicated the demand for the product,” says Emanuel. Men have become part of a loyal customer base “but Lumity Life was designed with women in mind, so Sara has created a male specific version that’s due to launch later this year.”

Makeup artist Bobbi Brown, who exited her eponymous cosmetics brand last year, has also started to target the inner health of her customers. She’s hosted empowering talks on YouTube and in April will launch Beauty Evolution. “It’s beauty from the inside out, done simply,” she says. “An evolution of wellness that starts with supplements for gorgeous skin, strong bones and overall glow. It’s an exciting time because people are starting to realise what I've said all along, which is that beauty starts from within. You have to take care of yourself to look and feel your best.”

Wellness is an expression of personal values and belief system in the same way a handbag or makeup might have played this role years ago.

Brendan Murdock, founder of cult barbershop and grooming line Murdock, which he sold in January last year, has moved away from traditional skincare and launched Anatomé, a wellness store pitched towards a unisex customer that focuses on physical and mental wellbeing. “Beauty is often only about the exterior but without a healthy diet, adequate sleep and fitness, you can’t achieve glowing skin,” he says. His space hosts nutritionists and blends of essential oils “all possessing intrinsic therapeutic properties.” There’s a branded line of vitamins, too.

Nutrition is something brands are focusing on more. Pai offers a team of wellness experts — including model-turned-nutritional therapist Frances Phillips, who specialises in treating skincare issues via diet — who contribute informed material for the brand’s blog and direct advice via the online chat function. “There are so many factors that can have an impact on our skin; using the right products is just one piece in the puzzle,” says Pai founder Sarah Brown.

But the inside-out beauty trend isn’t all about ingestibles. It also incorporates the mind, a feeling of wellness, much like the inspirational quotes that Itsines posts on her social media feed. The collateral impact is that for women now “wellness is an expression of personal values and belief system in the same way a handbag or makeup might have played this role years ago,” says Colleen Wachob, co-founder of the Brooklyn-based 360 beauty and wellness website mindbodygreen.com. “And the biggest thing you can do to make an impact on both your beauty and your longevity is how you take care of yourself.” In other words, it’s no longer about the business of beauty or even vanity, but the business of self-care. And consumers want to make an investment — in themselves. 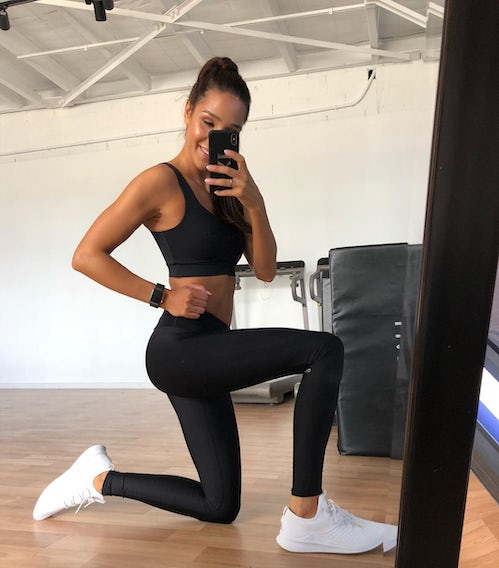 Spaces such as New York’s Inscape, a purpose-built meditation and relaxation centre complemented by an app, are opening by the dozen. “It’s like a workout studio for your mind,” says beauty advisory expert Saisangeeth Daswani of trend agency Stylus. “So, yes, there’s vitamins, but it’s coupled with empowerment messages to create the whole story for inside-out beauty. We call it 360 beauty, taking an holistic view rather than making yourself look better by piling things on your face.”

Aromatherapy Associates has also compiled a team of experts across exercise, sleep, food and mindfulness in response to “a significant increase in requests for advice on overall wellbeing,” says chief executive Tracey Woodward. Similarly, the Harrods Wellness Centre, which opened in London last year, is integrating emotional and physical therapies. “We had been following the holistic wellness revolution for some time, which has been producing a new breed of beauty and wellbeing spaces devoted to enhancing health and mindfulness, rather than simply encouraging consumers to create a great outer physique,” explains Harrods beauty director Annalise Fard. “The typical client usually visits for combination treatments, such as a Mindfulness session with Terrence the Teacher followed by a Runway Facial with Dr Papageorgiou of NYDG.”

Spas are also turning more attention to mind matters: the Daylesford Hay Barn in the Cotswolds now has psychologist and psychotherapeutic counsellor Elaine Slater offering a Mind Matters Clinic, and Sha Wellness in Spain promotes programmes constructed to attain physical-mental wellbeing. It’s an understandable — even necessary — move given that last year World Health Organisation revealed that depression is now the leading cause of ill health and disability in the world. So as much as we may want to sweat with Kayla and her ilk, it’s feeling good — as much as looking good — that may prove to be beauty’s new holy grail.