Is This the End of Gendered Media?

Seeing readers as demographics defined primarily by gender is no longer a sustainable business model. Appealing to readers’ shared interests and values is the future.

Is This the End of Gendered Media?

Seeing readers as demographics defined primarily by gender is no longer a sustainable business model. Appealing to readers’ shared interests and values is the future.

"New Masculinity" isn’t just the title of the November issue, but also a sort of mission statement for the men’s magazine’s latest chapter. Editor-in-Chief Will Welch, who took over in January, is leading the publication in a complicated era when more men are questioning their privilege and the roles they play in the workplace and within their families, and fewer men are turning to monthly magazines for guidance. 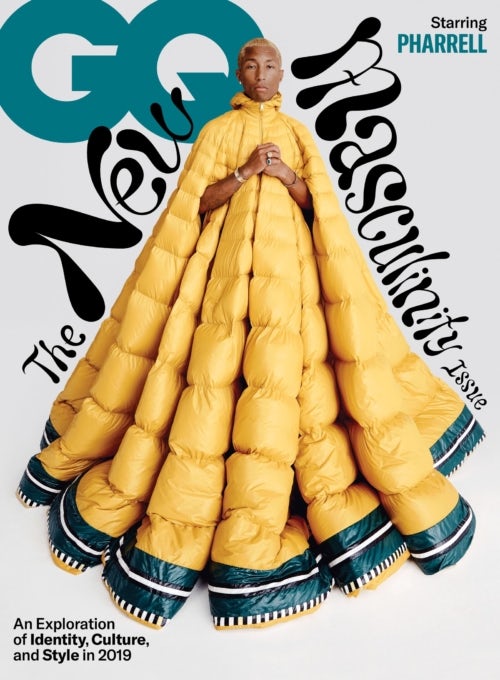 “As men’s fashion itself becomes less gendered, so do the pages of GQ,” Welch said. He’s not alone in rethinking the role of a men’s magazine — over at Hearst, Esquire’s even newer editor Michael Sebastian is figuring out how to modernise that title, too. So are their counterparts at women’s titles Glamour, Cosmopolitan and Bustle, which all brought on new lead editors over the last two years. Meanwhile, Refinery29 is entering a new era under Vice’s ownership. And new and reincarnated queer publications, including Out and Them, are expanding the types of readers they represent.

Whether they know it or not, these publications and others are tackling a fundamental question that illustrates a larger challenge in the media business right now: does gender matter anymore?

Readers, even those who identify as straight or cis-gendered, feel less defined by gender norms than they did in the past. And the business model underpinning the whole concept of dividing audiences by gender — in order to reach the largest number of readers as possible, so that advertising budgets will follow — is crumbling.

In other words, seeing readers as demographics defined primarily by gender is no longer a sustainable business model. Appealing to readers’ shared interests and values is the future.

“I think moving away from a really strictly understood sense of what a women’s magazine is, and what a men’s website is, is a financial imperative,” said Johanna Blakley, managing director of The Norman Lear Center at the University of Southern California’s Annenberg School for Communication and Journalism.

Blakley made this prediction in a 2010 Ted Talk, where she outlined how online communities are defined by different data points than advertising demographics. Nearly a decade has passed and her predictions haven’t yet changed the publishing industry, which Blakley said is to be expected.

“Evolution is slow,” she said. “It’s going to take a while before anyone understands how to use this data.”

In the pre-internet area, many magazines were created to serve advertisers that pitched themselves primarily at women (fashion and beauty, for example) or men (sporting goods and spirits). While these titles brought in ambitious journalism and political coverage, but articles and editorials showing readers how to be women and men were foundational.

New digital players in the women’s space, including Bustle, Refinery29 and Popsugar, brought this formula online, changing not the intent but the vehicle. Almost always backed by venture capital or institutional investors and owned by men, they adopted the more freewheeling tone found in blogs and social media, and honed strategies to attract maximum clicks. Magazine titles followed suit. They all promised “safe spaces” for advertisers, often steering clear of controversial topics — a list that has become more extensive in this polarised climate, with many brands banning the ads next to articles that include words like “Trump” or “Brexit.”

But in the cutthroat fight for readers online, lifestyle publishers adopted the same traffic-driving strategies, filled with the same keywords and types of headline construction. They prioritised views above all else; whether anyone read beyond the headline, or returned to the site, was secondary. Original reporting took more time to produce and was riskier, so it was de-prioritised. Sponsored content got subtle. And the traffic targets kept picking up, even as an increasingly crowded market made finding new readers harder.

That’s not to say women’s and men’s lifestyle titles haven’t published smart and ambitious stories over the last decade. They have. But they were less frequent and readers typically found these pieces through social media, instead of cultivating loyalty to any one site, which started to blend together. And a lot of the women's publications that started up over the last five years and tried to take different approaches, like Lena Dunham and Jenni Konner's Lenny Letter, were suffocated by the market.

“Once you are one of twenty websites that is doing the story about Kylie Jenner’s sneeze that morning, then you don’t really have a lot to differentiate you from other places,” said Mikki Halpin, an editor and creative consultant who has worked at MTV, Glamour and Refinery29. “You just end up having to churn out more and more and everything becomes more and more the same.”

Thinking of readers as individuals instead of traffic metrics also “went out the window, if it ever existed,” Halpin said.

Forward-looking publishers are realising the clicks-for-ads model alone is not going to get them through the next decade.

Google and Facebook, which offer brands the best audience targeting, are projected to soak up 62 percent of the $298 billion spent on online advertising this year, doubling their share since 2014, according to data from the World Advertising and Research Center. In addition, the amount of ad spend available to other online media owners will decrease for the first time by 7 percent.

So publishers are doing their best to diversify by, for example, recommending products to readers and taking a cut when they drive a purchase. They’re producing videos and podcasts, hosting events or putting articles behind digital paywalls. Some sell clothes and accessories of their own.

But to convince a reader to attend a conference or buy a T-shirt, publishers need to build a connection beyond the latest clicky headline. They need to have clearly defined values and identities that keep them in the cultural conversation, and think about their readers beyond traditional advertising categories like age, but especially gender.

“People are just interested in the GQ point of view, and it’s almost like men’s fashion is just the raw material with which we do our thing,” said Welch. He’s not abandoning his primarily male audience (though almost 47% of its readers online are women), but he does not want GQ to feel like a “private clubhouse for men.”

After acquiring Refinery29, Vice Media said it would invest in “premium content” across all platforms, which newly combined reach a 50-50 split of male and female audiences, in order to “strengthen our position for a competitive future.”

That competitive future now includes facing off against the newly combined Vox Media and New York Magazine. The latter's women-focused site The Cut has managed to grow a substantial audience while establishing its own brand identity, mixing traffic-friendly celebrity content with political coverage and investigative journalism.

Bustle Digital Group (BDG), which turned search engine-optimised articles into a $100 million business, is also setting up for a pivot. In September, the company hired Emma Rosenblum, a veteran of Elle and Bloomberg Businessweek, as editor-in-chief for its lifestyle titles. She’s tasked with raising the quality of writing and editing at sites that include Bustle, Romper and Nylon.

The goal is to turn BDG's publications into destinations. The company has acquired sites like the Zoe Report and Nylon to appeal to different types of women, even as most of its traffic comes from Bustle itself.

“They’ve already figured out the hard part of the eyeballs, but now we can bring in the part where we are elevating the content and upping the quality,” Rosenblum said.

BDG is also trying to expand the types of advertisers it works with beyond fashion brands and retailers, its largest categories. The new executive vice president of revenue, Elizabeth Webbe Lunny, told BoF that in addition to growing the women’s portfolio of advertisers through health and wellness brands and other types of adjacent companies, she is focused on selling to “tech, telecommunications and financial outside of just the credit cards.”

She said advertisers still come to Bustle to reach women, but are approaching their audience differently.

“You might have a fashion company that still needs to sell products at the end of the day, but they have to reimagine themselves as a brand that is leading the cultural conversation,” she said. “And that means you are talking about and embracing the conversations that are going on about gender and women and diversity.”

Now it’s on Rosenblum to turn Bustle into a place that is more known for leading those complex conversations online. It’s a formidable challenge and one that is not unique to Bustle.

But Halpin is betting that a new generation of publications will be better positioned to reflect how readers actually see themselves and their interests today. 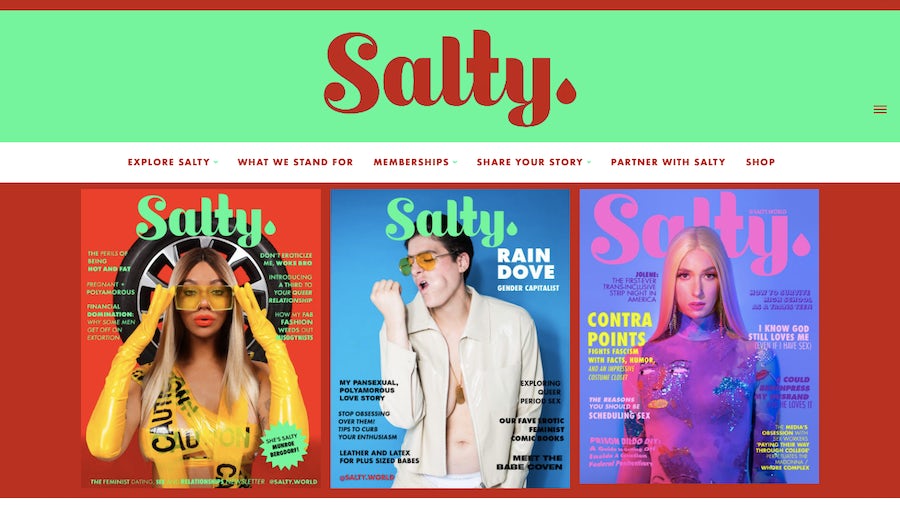 A screenshot of SaltyWorld.net | Source: Courtesy

Salty might be one of the publications. The bold and unapologetic volunteer-run newsletter — about sex and relationships and lifestyle — is written and edited by "women, trans and non-binary" contributors. Claire Fitzsimmons, formerly of Nylon and Paper, founded it in 2018. Salty is exploring different business models and is currently funded by memberships of $5 to $20 a month, merchandise and branded content. It has a community of over 130,000 users and 45,000 newsletter subscribers.

“There is no ‘women’s’ media space that speaks to us in a way that doesn’t pander to us and also understands that not all of us are cisgender, not all of the readers are white, slim women,” said Fitzsimmons, who identifies as bisexual and non-binary. “I’m not refined. I’m not alluring, I’m not glamorous.”

Fitzsimmons has been flooded with contributor content, enough to keep her publishing schedule full through at least next spring. And the founder is betting she can turn this interest into a sustainable business but isn't looking at Cosmopolitan as the model.