Is Your Fashion Brand Ethical?

More and more brands are claiming that the clothes they sell have a positive social impact. Here are four essential steps toward making that statement true.

Is Your Fashion Brand Ethical?

More and more brands are claiming that the clothes they sell have a positive social impact. Here are four essential steps toward making that statement true.

COPENHAGEN, Denmark — The first clothes to come down the runway at Copenhagen Fashion Week on Tuesday will have been made by prisoners.

Carcel, a Danish brand that sells $597 silk dresses and $426 Alpaca wool jumpers, employs 30 incarcerated women in Peru and Thailand to produce its garments. The brand describes its approach as an “alternative way of fashion” that helps disadvantaged women “gain new skills, earn fair wages and provide for their families.”

The Danish label is one of a growing number of fashion brands that not only claim to operate ethically, but portray themselves as having a net positive social impact. It’s a stance that resonates with consumers who increasingly want to shop with brands that loudly match their social values.

But the fashion industry has a poor track record of following through on delivering real results. Carcel’s model has been praised for employing and upskilling underprivileged women. However, the brand has also been criticised for the contrast between the wages they pay — €12 ($13.21) per jumper — and the retail price, which can exceed 30 times that amount. Early last year, Carcel published and then quickly deleted infographics breaking down its supply chain and business model — although the information remained available on their website — which were widely panned on social media.

If you’re being transparent, tell me what you’re doing wrong.

Veronica D’Souza, Carcel’s founder and chief executive, said the lack of public information about how clothes are made makes it a fraught topic to raise with consumers.

“Very few brands are putting out their supply chain costs or disclosing their wage level, so it's hard to communicate to customers how to relate our model to other companies in the industry,” she said. “Some people saw the markup and said ‘Look at that: you’re just taking all the money,’ and others responded, ‘You will never be a successful business.’”

That hasn’t stopped more brands from touting their ethical bona fides with customers. High street mainstays Zara, H&M and Topshop — each of which has been called out for contracting factories with sub-optimal working conditions — have joined ACT (Action, Collaboration, Transformation), an initiative that aims to improve wages in the textile and garment supply chain.

ACT only started in 2016, and some critics argue that progress will be slow considering the small number of brands currently signed up. 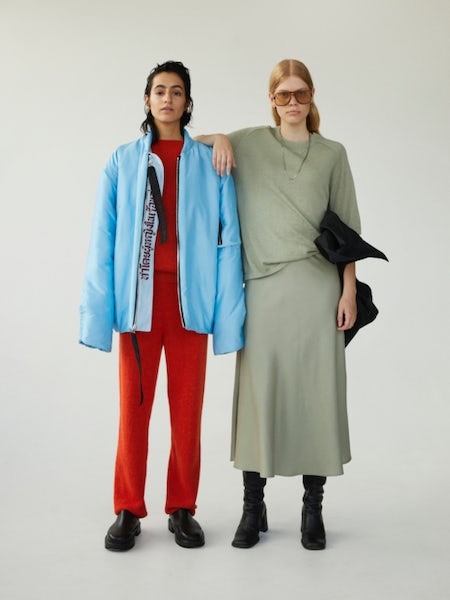 Signing onto initiatives like ACT, or making internal targets public, carries risks. In 2013 H&M said that it would work with suppliers to ensure 850,000 textile workers were paid a living wage by 2018. Five years later, H&M said it had met its goal, while the Clean Clothes Campaign, an alliance of labour unions, accused the brand of failing to do enough to promote fair pay.

“There is no universally agreed level for living wages, and wage levels should be defined and set by parties on the labour market through fair negotiations between employers and workers representatives, not by Western brands,” H&M said.

Brands big and small are still learning how to make and sell fashion ethically while maintaining a healthy margin, and how to convey their progress to customers. Admitting where they fall short is just as important as touting accomplishments.

“We should be telling our consumers, ‘Hey, this is not what we are doing correctly, but we are trying to make it better.’ I think that really resonates with people,” said Hillary Taymour, founder of Collina Strada, a New York-based eco-conscious fashion label. “Like, if you’re being transparent, tell me what you’re doing wrong.”

So, when can a brand claim to actually do good?

For a company to plausibly claim that it operates ethically, it must ensure that employees are appropriately compensated.

Brands often use the term “living wage” as shorthand for treating employees well. However, the term has no formal definition, and companies paying vastly different amounts can claim to meet that standard. Consider a worker in Tirupur, a city in southern India known for its knitwear. The Asian Floor Wage Alliance, an international alliance of labour activists, estimates a living wage there to be 23,588 rupees ($329.99) per month, while trade union Hind Mazdoor Sabha estimates it at 18,000 rupees ($251.82). Meanwhile, the Global Living Wage Coalition, an initiative focused on developing global living wage benchmarks, sets a living wage for a family of four with one full-time and one part-time worker at 14,670 rupees ($205.25).

We need to look at where power is and who is profiting.

By using the same term to apply to workers in different countries, brands also open themselves up to criticism that they are profiting off — and perpetuating — systemic inequality, particularly in developing countries where labour regulations are patchy at best.

Many fashion brands argue that they cannot raise wages without eroding already slim margins, or being undercut by rivals. But the first step toward separating marketing ploys from genuine work toward social change is acknowledging the problem, followed by releasing information about pay. 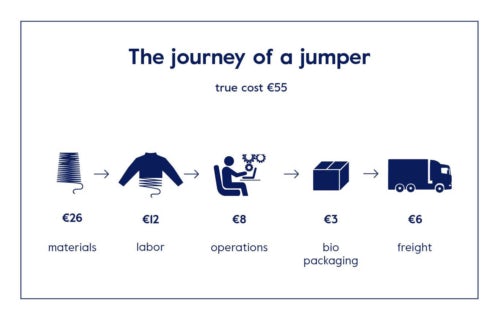 Infographics on the "true cost" of a Carcel jumper | Source: Carcel

In January, Carcel published another breakdown of the “true cost” of a jumper, including materials (€26) and labour (€12), the reasoning behind its markup and how it spends its profits; Carcel states that 100 percent of its earnings are reinvested into the company.

Ultimately, brands should be aspiring to make their products accessible to the communities that make them, said Ben Barry, associate professor of equity, diversity and inclusion at the School of Fashion at Ryerson University in Toronto.

“Brands shouldn’t just engage a community by hiring artists, designers and producers, but also ensure that the final products have an opportunity to stay in the community as well,” he said.

Compensation isn’t limited to wages. In luxury fashion, local artisans are often hired to design and produce garments, typically receiving payment for their time and effort.

A few brands go a step further, and grant intellectual property rights as well. This gives workers legal rights to their craftsmanship, including a share of any profits made off their work and the ability to capitalise on what they produce independently from the brand that hired them.

Canada Goose took this into consideration when it launched Project Atigi, an annual parka collaboration with Inuit designers, in 2018. The outerwear brand extended intellectual property rights to seamstresses who designed and created a luxury line of parkas, which retailed for C$2,500 ($1,896.84). Proceeds from the sales were donated to Inuit communities through Inuit Tapiriit Kanatami, a Canadian non-profit organisation working to protect the rights of Inuit people.

“It’s important to us that [the designers] know that our intention is not to take their design and commercialise it for them,” said Canada Goose Chief Executive Dani Reiss.

Intellectual property rights “means both honouring and recognising the rights of that design and the community with whom the design originated and belongs to,” Barry said. “Intellectual legal rights are in many ways tied to profit, and this is tied to a true rebalance in the system.”

For brands to be held accountable, they must be transparent about the work they are doing — and the conditions in which it is done.

“Transparency… is a means to creating a better supply chain and creating better working conditions,” said Christie Miedema, campaign and outreach coordinator at Clean Clothes Campaign. “Brands might fear the exposition of labour rights violations. But the quicker it comes to their attention, the quicker they can fix it before it becomes a bigger scandal.”

Transparency… is a means to creating a better supply chain and creating better working conditions.

French sneaker brand Veja, which was awarded the status of a certified B Corporation in 2018, meaning it is a for-profit business with high environmental and social standards, publishes a breakdown of its supply chain, including the number of full-time and part-time employees, the lowest-paid wage, healthcare coverage and the number of paid days off employees receive.

Swedish denim brand Nudie Jeans publishes a series of annual reports, which include where its garments are produced, how living wages are calculated and when it audits production facilities.

Publishing such information not only gives brands credibility on the issues they claim to support, but can also be a powerful way to engage consumers increasingly interested in more ethical consumption. On the flip side, the fashion industry largely remains a black box.

While a growing number of brands are touting greater transparency in their marketing, many still have limited visibility on their own supply chains.

Brands that want to have a positive social impact may have to sacrifice some sales and profits.

“We simply need to redesign the way we think and talk about value and growth and prosperity,” sustainable fashion forum Global Fashion Agenda Chief Executive Eva Kruse told BoF. “It’s a much bigger concept than just implementing practises that minimise and optimise; it challenges 100 years of thinking about the need to grow and become more wealthy.”

Some outfits are taking a more radical approach. Blue Tin Production Co-Operative — a clothing co-operative founded by Katebi and run by immigrant and refugee women, which manufactures garments in Chicago for third-party brands — shares profits equally across its workforce. Katebi said all decisions about the co-op are made unanimously.

“There isn’t a hierarchical structure; there’s no manager or overseer,” Katebi said. “The women we’re working with are absolutely brilliant and there’s no reason why they shouldn’t have agency over their work.”

Paying a bit of money for a collaboration or saying there’s going to be exposure is not enough.

The power of a co-operative business model lies in its emphasis on community over profit. Blue Tin said that 80 percent of the proceeds from manufacturing contracts received in 2019 went toward wages. That’s compared to an average of less than 1 percent in fast-fashion factories, according to statistics compiled by Lembaga Informasi Perburuhan Sedane, an Indonesian NGO whose work was cited by Blue Tin.

Such initiatives may sound radical today, but could look prescient down the line. A growing number of voices within the industry are beginning to grapple with the need to contend with new business models for fashion, as criticism of its environmental and social impact grows.

“Brands and consumers need to... ask, ‘How can we best work toward redistributing and rebalancing power?’” Barry said. “Because paying a bit of money for a collaboration or saying there’s going to be exposure is not enough.”