Seoul’s awe-inspiring Dongdaemun garment district makes it hard for the likes of H&M to compete in one of Asia’s most influential fashion markets. BoF investigates the hyper-local, hyper-connected competition.

Seoul’s awe-inspiring Dongdaemun garment district makes it hard for the likes of H&M to compete in one of Asia’s most influential fashion markets. BoF investigates the hyper-local, hyper-connected competition.

SEOUL, South Korea — Zara needs just five weeks to get its designs from concept to store hanger. That speed has vexed traditional retailers, but it seems amusingly sluggish compared to some Korean retailers. Early in the morning, canny entrepreneurs can take a design to the 50,000-odd manufacturers in Dongdaemun, the dense garment district in Seoul, and be hawking the results by dinnertime.

“Every trend in Korea starts from there,” says Jeongeun Grace Park, who is the global sales marketing manager at Metrocity, a Korean fashion retailer founded in Italy with more than 100 locations in Korea. While Park may be overstating the district’s clout ever so slightly, few would argue against the influence of this lightning-fast manufacturing hub.

Considering that Dongdaemun-made clothes are often even cheaper at retail than international fast fashion brands, the business opportunities for upstart e-tailers are enormous — especially with the entire supply chain right on their doorstep. These clothes are typically private label, which is unusually dominant in Korea. Dongdaemun wholesale apparel is also the most common find on Korean online shopping sites.

Korean brands’ sourcing strategy, which includes internalised production and some off-shoring, has allowed it to edge out some foreign retailers, says Taeho Sim, a Seoul-based partner at global management consulting firm A.T. Kearney. “These activities have resulted in local companies being able to offer price-competitive, trendy clothing products while maintaining quality and brand power.”

Claire Hwang works with luxury brands as a consumer and retail principal at the Seoul office of executive search firm DHR International. She still has private-label apparel purchased in Dongdaemun that are a decade-old. Perhaps surprisingly, Hwang says, "their quality does not suck; [in fact] their quality is very good. H&M, [on the other hand], sometimes their clothes are not actually wearable. Sometimes it’s just dispensable, you wear it for a party then throw it in the trash."

Hwang’s opinion is not uncommon in Korea. A growing number of students and young professionals who usually comprise the bulk of fast fashion’s customers eschew international brands for cheap, convenient online outlets, including Boohoo.com-esque e-commerce platforms, online marketplaces where individual players can launch their own storefronts and search portals where tailored suggestions are advertised as you browse the web.

They’re all stocked with private-label, Dongdaemun-manufactured clothes and hew closely to Korean trends, which aren’t often what’s being offered in international stores. Online malls, operated by retail juggernauts like Lotte, sell foreign and domestic brands alike for loyalty discounts that may not be available in the individual store. And there’s a slew of conglomerate-owned chains, like Samsung’s Bean Pole and 8seconds.

Clothes produced by ubiquitous chaebols like Samsung, brandless Dongdaemun apparel, and everything in between dominate the average Korean wardrobe. That’s thanks to this country’s ever-changing trends, omnichannel integration, different sizing needs and the perception among some that Korean clothes are often better quality than ones made elsewhere in Asia.

What’s known as fast fashion in English-speaking countries is called “SPA brands” in Korea. This stands for “specialty retailer of private label apparel.”

“SPA brands such as H&M and Forever 21 have been able to satisfy the shifts in consumer preferences, but have faced an intensifying competitive landscape due to the rise of many local Korean brands,” Sim says.

Global fast-fashion players in Korea are suffering in comparison to other wealthy Asian markets, according to data provided by Euromonitor, a market research provider. Forever 21 had less than a 0.1 percent market share in 2016. Hennes & Mauritz AB, which owns H&M, Cos and other brands, claimed 0.4 percent of Korea’s clothing market, compared to its global share of 1.3 percent. 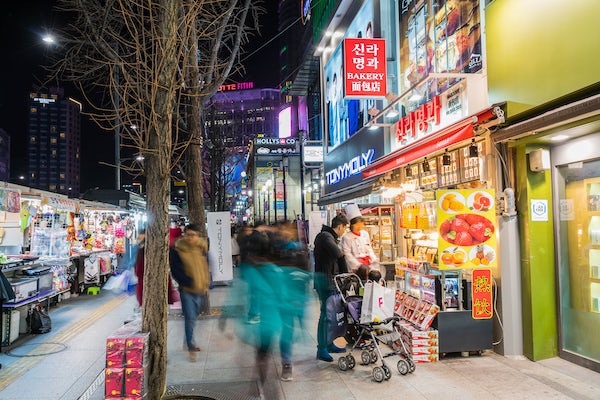 Park, for instance, says she eschews H&M, unless she “needs something very unique for fashion week. If I need something bling-bling.”

Thanks to its more prestigious reputation, Zara has not floundered in Korea compared to other fast fashion brands. Still, it had slow storefront growth compared to other Asian countries from 2011 to 2016, according to its investor relations report. Zara’s store numbers boosted by 26 percent, compared to Japan’s 35 percent, China’s 91 percent and Malaysia’s 50 percent.

Other Inditex properties, which lack the same brand name as Zara, have not flourished in Korea, says Lisa Hong, a research analyst at Euromonitor Korea. “Consumers tend to stick to the major brands rather than trying out new brands,” Hong explains.

Korea’s apparel and footwear industry is unusually dominated by local players for a country of its size. Among brands that have at least 0.1 percent market share, 53 percent are based domestically in Korea. That’s on par with Japan (54 percent) and the United Kingdom (58 percent), whose markets are more than double the size of Korea’s.

Private label clothing, such as wholesale clothing from Dongdaemun, also comprises a much larger portion of this country’s apparel market than others, at 9.1 percent market share. Non-labelled clothing is 5.3 percent of the Japanese fashion market, 3.8 percent in the U.S. and 0.4 percent in Singapore.

Private label clothing, such as wholesale clothing from Dongdaemun, comprises a much larger portion of the country’s apparel market.

Still, the situation is hardly bleak in Korea. In 2016, Inditex added new flagship stores in Korea and added an online store. H&M established an online COS presence as well as a physical & Other Stories store. Its sales in local currency grew 15 percent from 2016 to 2017, compared to the companywide average of three percent.

But foreign outlets must remain nimble in markets like Korea, previously considered an easy win, argues Benjamin Cavender, a principal at Shanghai-based China Market Research Group. “They're struggling with how to maintain efficiency while having localized markets,” Cavender says. “It’s difficult to tune your supply chain to do that effectively. It’s a struggle because many local brands are doing that already, so the larger brands are having trouble adjusting.”

Moreover, while international outlets have specific strategies for entering the giant Chinese market, comparatively-smaller Korea is likely to get left behind.

“In order to maintain a strong presence and respond to intensifying competition in the Korean market, international chains need to employ an aggressive marketing strategy accompanied by localised and trendy clothing products — especially focused on Korean customer's preferred style and design — with a favourable price point,” Sim says.

Trends here move at a notoriously fast-clip, a fact that often frustrates foreign retailers who try to expand here. An online specialty store, which sells a curated selection of wholesale and special-made products, can add as many as 100 new items per week, according to public relations executive Alyssa Kang of cafe24, an online shopping platform. While this cadence doesn’t quite compare to some Western online players like ASOS or Boohoo, it is still lightning fast. 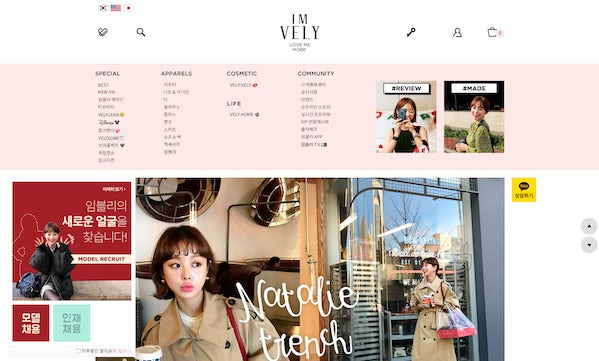 Perhaps more importantly, the trends being captured by local online players are unique to Korea and not available at international outlets. That’s partially thanks to the robust domestic entertainment industry. K-pop music alone is now a $4.7 billion industry. Here, more than in other Asian markets, local celebrities are the real fashion icons. And because production is done domestically, rather than relying on complex, multinational supply chains, outlets are able to quickly pick up what’s trending on social media and integrate these into their stores.

This season’s trendy coat, called the “long padding” or “caterpillar” coat, depicts how certain silhouettes can dominate here. In this instance, both sexes started wearing a calf- or ankle-length, A-line, puffy coat, usually in white or black. The PyeongChang long padding became a breakout item, causing more than 1,000 folks to line up for the special edition coat, while a home shopping show featuring K-pop boy band Super Junior sold 19,000 long paddings in the course of a few hours.

“If there is one trend that is popular these days, everyone is wearing it,” Alyona Afanasieva, an overseas business development manager at 08liter.com, an online shopping platform based in Seoul. “Everyone wants it. It’s not like someone would say, ‘I don’t want this because everyone is wearing it.’ It’s the opposite. ‘Everyone has this, so I want it, too.’”

The ability for trends to spread quickly and wholly across Korea is perhaps an inevitability of a homogeneous population of 51 million, of which nearly 80 percent uses mobile Internet and where teens and young adults spend around four hours a day on their phones.

The hyper-connectivity further drives folks to buy online; more than 8 out of 10 Koreans shop through the Internet, the largest found in a study by Kantar TNS. Total online shopping sales increased 20.5 percent year-over-year in 2016, according to Statista.

The trends being captured by local online players are unique to Korea and not available at international outlets.

As in many parts of Asia, Korean clothes are often “free size,” meaning it’s one-size-fits-all, particularly for tops or dresses. Unlike Western clothes, which have a comparatively baffling sizing system, there’s no need to try something on.

Koreans are more likely to shop on search portals like Naver than on individual store websites. Also popular are eBay-like websites where individuals curate their own storefronts, Groupon-like deals-driven websites, or online specialty stores. Most retailers, save for big e-commerce sites like Stylenanda or IMVELY, depend on larger e-commerce sites to drive consumers.

Consumers expect speed. Shipping in South Korea, which could fit between Los Angeles and San Francisco, takes at most one to two business days. Sometimes it even arrives the same day for no additional cost. No wonder the country is so primed for m-commerce.

Meanwhile, international brands often have online shopping enabled in Korea, but few are available on the websites that Koreans already frequent. One must go out of their way to pick up a basic black t-shirt from H&M, but their loyalty points at their favourite e-tailer could score them one for free.

These websites provide an in-store-like experience. Take Imvely, which is one of Korea’s most popular online specialty stores. Pouty-faced or beaming models sport the new togs while cooking crab, sipping Starbucks, eating popcorn at the movies, snapping selfies or a variety of other everyday activities. “Customers buy the feeling and atmosphere of the products that the online specialty store paints,” Kang says.

The imagery used by international fast fashion players online can seem comparatively cold — or worse, boring to the Korean consumer they are targeting. “Local online stores are much better at presenting proper ‘idols’ [for Koreans to relate to and emulate].”