PARIS, France — One year after hiring creative director Bruno Sialelli, who presents his latest collection for Lanvin on Wednesday morning in Paris, the French house’s uphill battle to reclaim its position as one of the world’s top luxury brands is showing signs of progress.

The pressure is on, however, to grow top-line sales without excessive costs as the brand tries to return to profitability.

Ten years ago, this kind of turnaround might have been easier: the multi-brand retail market was stronger, there were fewer communication channels and less consolidation around Kering and LVMH, and a Chinese-focused global health epidemic wasn’t veering towards pandemic.

But with new owners, a new executive team, and a studio full of new design talent in addition to Sialelli, Lanvin is staying the course as sales begin to slowly increase for the first time in years.

“There is no miracle, [but] the recovery is on track,” said chief executive Jean-Philippe Hecquet, who joined the challenged label in 2018. “Rebuilding the confidence with our clients… takes time, specifically after three or four years of uncertainty around the brand.”

Lanvin’s tumultuous recent history is well known throughout the industry. Its beloved long-time womenswear designer Alber Elbaz was dramatically pushed out in 2015 by the house’s former majority owner, Taiwanese businesswoman Shaw-Lan Wang. The brand never regained the commercial success Elbaz’s designs delivered over his 14-year tenure. Lucas Ossendrijver, the menswear designer who stood alongside Elbaz for much of that time, departed in 2018.

After a revolving door of creative talent came and went, Wang finally sold the business to Chinese conglomerate Fosun, which paid €120 million in 2018 for the stake and said it would invest more than €100 million in the brand.

As of last year, the Fosun Fashion Group under chairman Joan Cheng was seeking to sell a minority stake in the sub-business to raise at least $100 million. She told The Financial Times that the investment was motivated by “a need for ‘strategic partners’” to add to the group’s board members and that Fosun Fashion has “sufficient funds” from its parent company. 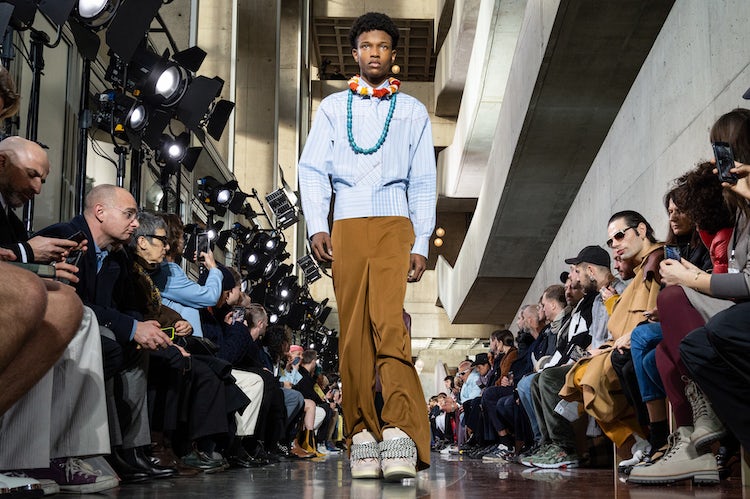 Hecquet, who joined Lanvin from Sandro and Tag Heuer and described himself as having gone through “the LVMH school,” took on the job because he saw potential in reviving one of France’s oldest couture houses and because he was confident in Fosun’s commitment to investing in that turnaround.

Sialelli was hired to oversee both men's and women's at the beginning of 2019 from Loewe, where he designed menswear under Jonathan Anderson for almost three years, but was otherwise an unknown name in the industry. The label was said to have spoken with Haider Ackermann and Simon Porte of Jacquemus for the role, but it is unlikely they could have afforded a superstar designer’s salary at that point.

“Obviously there is a lot of pressure and we know the brand has struggled for years,” said Sialelli. “It was a challenge to dig into it and to jump. But I thought, ‘Okay, I’m optimistic and I’m young and I want to do it.’”

He said he was inspired by Lanvin’s history, and wanted to reference the brands’ origin in childrenswear by taking inspiration from the nostalgia and playfulness of early life.

Sialelli’s collections have been more well-received by critics and editors than those of his immediate predecessor, Olivier Lapidus, with the response becoming more positive with each collection. (Editorial coverage increased 300 percent year-over-year in 2019, according to the brand, though that is likely also tied to an increase in advertising spend.) Sialelli brings a more casual, everyday focus to the brand — how people actually dress today — in contrast to the eveningwear that was most associated with Elbaz’s heyday at the brand, or Ossendrijver's more traditional take on menswear.

Sialelli represents a fresh approach, and Hecquet said it has invigorated the company internally, which is leaner and more global than it was in the past, with more employees in the US and China.

“We turned the brand from a very French brand and French organisation into a more global mindset organisation,” said Hecquet.

Many critics have commented on the similarities to Loewe that they see in Sialelli’s first collections for Lanvin, but the differences have become more visible over the last year.

“I arrived there a year after Jonathan and I was part of the whole creative process,” said the designer. “Now moving forward to another house, it’s difficult to not be myself.... I just need some time and people need some time, as well, to notice the evolution of my work. I think the next show is going to prove that.”

There are already signs that the consumer is noticing an evolution.

“After many years of red figures in our report, the red turns green,” said Hecquet. Sialelli’s first collections only hit stores in the summer of 2019, but retail sales are already up 20 percent season-over-season between the Autumn/ Winter 2019 and Spring/ Summer 2020 womenswear collections (even though the latter has only been available to shop for a few months). In addition, wholesale orders for the men’s collection increased 15 percent between the Spring 2020 and Autumn 2020 seasons.

After many years of red figures in our report, the red turns green.

But the brand is still operating at a loss, and Hecquet has emphasised an entrepreneurial mindset. “Because we are small, you need to be agile... We don’t have the same power as the big groups, that’s for sure,” he said, adding that the house’s small size allowed it to move quickly on opportunities last year, such as finding a pop-up space in New York’s Soho neighbourhood and opening it within six weeks. Similarly, the label decided three months before the opening of an exhibition for its 130-year anniversary in Shanghai to produce a corresponding capsule collection and was able to deliver in time.

What’s driving the turnaround so far?

Accessories are a big part of it. While Elbaz's sneakers and ballerina shoes were once wildly popular, the category decreased sharply in recent years and is essential to the commercial growth and stability of a luxury brand. New versions of the “Bumper” sneaker are selling, as are the women’s “Hoop” and “Pencil” handbags. Hecquet is targeting a 50-50 split between accessories and ready-to-wear in the next three to four years.

China is also a significant driver, a region where previously Lanvin had almost no business. Fosun is counting on sales from Chinese shoppers domestically and abroad to represent a significant and growing slice of sales as the turnaround develops. The region is the world’s largest luxury market, after all, and Lanvin now has a direct connection through its new owner, which is also executing turnarounds for other western brands like Wolford, Tom Tailor and St. John.

Lanvin opened two stores in Shanghai and one in Beijing last year, all under Sialelli’s new vision, and plans to open seven to eight more stores in the next three years.

But now everything is up in the air for Lanvin in China as the coronavirus outbreak continues to develop, and sales will likely take a hit as Chinese luxury shoppers cut back on travel and purchases. Hecquet said Fosun is very involved in monitoring the coronavirus situation and the first priority is to “take care of the team” there. “Every day we speak, that’s for sure,” he said.

In the meantime, Lanvin is planning on renovating some of its global flagship stores to reflect Sialelli’s design ethos and keeping an eye out for other temporary locations that might make sense, like another temporary, concept store due to open in Las Vegas this spring. 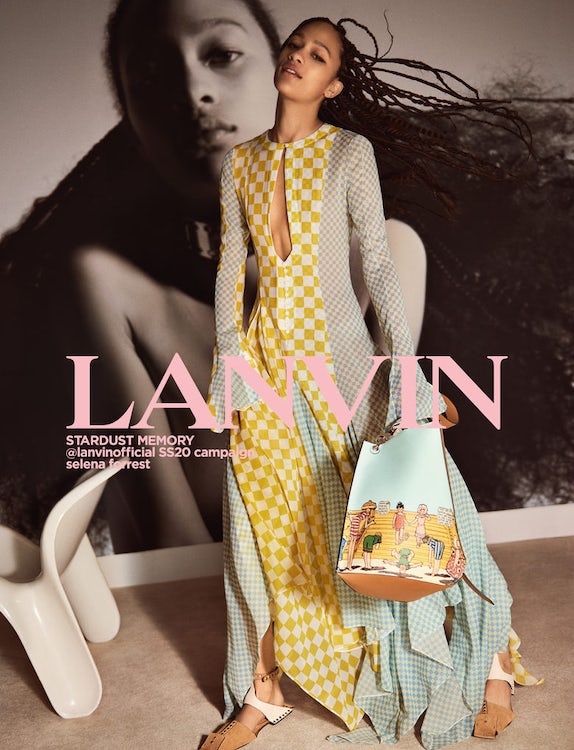 Lanvin’s direct retail network, while limited compared to other luxury brands with only 15 locations, is increasingly important as the wholesale market continues to struggle globally, especially in the United States. Online and brick-and-mortar retailers like Net-a-Porter and Nieman Marcus have returned to buy Lanvin over the last year, while others are slowly increasing their categories and penetration. Neiman Marcus, for example, is starting only with men’s accessories; menswear represents 40 percent of Lanvin sales and the label has historically had a strong business in suiting.

Hecquet said his approach with third-party retail is doing more with fewer partners, like Printemps in France, who can tell a full story. Other new and returning online retailers include MyTheresa, Ssense, Matches Fashion, and Luisa via Roma.

“We try to work with wholesale partners who can help us to express our brand properly,” he said.

Meanwhile, Lanvin is focusing on communicating its new approach in fewer, splashier ways. Mainly the fashion shows, which have represented a significant investment and which will, starting next season, combine men's and womenswear in one presentation each season during the women’s weeks in Paris in order to deliver a bigger impact.

The rest of the marketing focus is on channels like Instagram, where the number of followers has increased 50,000 per month for the last four months, reaching 4.1 million, with half of new followers under 34 years old — much younger than its audience historically. The platform is driving sales to Lanvin’s website, a sales channel that badly needed updating when Hecquet arrived and has been a priority.