Madhappy was founded by four men in their early 20s in 2017 as a streetwear-meets-athleisure label. It now counts luxury’s biggest player as one of its backers.

Madhappy was founded by four men in their early 20s in 2017 as a streetwear-meets-athleisure label. It now counts luxury’s biggest player as one of its backers.

NEW YORK, United States —  There is an adult sandbox in the dressing room at Madhappy’s pop-up on Howard Street. Technically, the mirrored space is a “self-reflection chamber,” according to Noah Raf, 23, one of the streetwear brand’s co-founders. But the sand floor hints at the room’s true purpose: content creation, not trying on French terry-cloth hoodies and sweatpants.

Raf and Madhappy’s three other co-founders — average age, 24 — have proven to be experts at getting the right people in their clothes and in their pop-ups since launching their streetwear-meets-athleisure label in 2017. Now, they’ve attracted the attention of the biggest name in luxury goods. LVMH Luxury Ventures, the investment arm of the conglomerate that owns Louis Vuitton, Dior and other brands, led a $1.8 million seed round that also included designer Tommy Hilfiger, Norwegian DJ Kygo and the founders of salad chain Sweetgreen.

But the bet on a tiny streetwear label is a sign of the luxury giant’s eagerness to get on board with start-up culture and emerging fashion business models, even as its parent steers some of the industry’s biggest brands.

Raf, along with Joshua Sitt, Peiman Raf and Mason Spector (ages 23, 25 and 25, respectively), started selling hoodies, tees and hats on their e-commerce site in April 2017, opening the first pop-up in LA later that month. Early on, celebrities like Cardi B and Sofia Richie wore the brand, helping create buzz on social media. Madhappy opened a series of pop-ups where they sold clothes and hosted parties; a block party this summer on Melrose Place in Los Angeles attracted thousands of guests. Since 2017, there’ve been 10 pop-ups in Los Angeles, Aspen, Miami and New York. Offline efforts comprise about a third of sales. 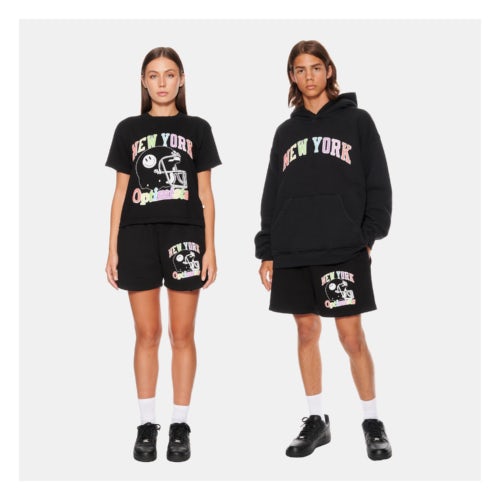 Permanent stores are planned for next year in LA and New York, the brand’s biggest markets. But pop-ups will remain integral to the brand.

“The old school model of retail is to do a pop-up store and see if it can hold the sales, then extend to a long-term lease,” Sitt said. “That’s not how we look at it. We look at as a chance to introduce Madhappy to the local community.”

It also helps that the clothes are at the nexus of two of the hottest trends in fashion. Brands like Off-White and Vetements brought streetwear's hype factor to luxury. People also dress more casually in general — it’s become the norm to wear a hoodie in many workplaces.

Luxury labels have taken steps to embrace these trends, from Louis Vuitton appointing Virgil Abloh to artistic director of Louis Vuitton men's to Prada reviving its Linea Rossa athleisure line and partnering with Highsnobiety to sell it. But these examples and others show how traditional fashion houses lean on outsiders’ expertise to understand how to sell apparel and accessories to younger consumers with an insatiable desire for “newness.”

“LVMH is not trying to recreate it [streetwear] from a distance by copying after the fact. They’re getting in front of it by collaborating with the organic creators of this new way of living, working, wanting, shopping, being,” said Shireen Jiwan, founder of Sleuth Brand Consulting. “[LVMH is] rethinking the way they think about their own relevance and not trying to appropriate it through these brand collaborations with semi-celebrities.”

In recent years, LVMH has expanded on what their idea of luxury is — and even what luxury should cost. Efforts include Rihanna’s Fenty, where a pair of skinny pinstripe pants from the latest release retail for $550.

Madhappy’s price point is closer to contemporary, with T-shirts costing around $70 and the most expensive hoodie at $185. However, it follows the “scarcity” model of other streetwear brands, with 24 drops a year, six times that of the average designer fashion house. The newest capsule includes black tees, hoodies, sweatpants and shorts emblazoned with “New York” or “New York Optimists” in oversized, multi-coloured pastel lettering. It’s only available in the Soho popup and once it sells out, it’s gone. There have been other “local” collabs with Lucali’s, a pizzeria in Brooklyn, and The Apple Pan, a cash-only burger joint in LA.

The founders emphasised the importance of normalising conversation around mental health, a mission that’s sure to resonate with a largely Gen Z audience. For World Mental Health Day on Thursday, Peiman Raf is moderating a panel at the Soho popup where Spector will discuss his own struggles with mental health alongside experts.

Its customers are also 65 percent women, a rarity in the category.

“Our classics releases may skew to that Reformation consumer, but then our capsules touch to the streetwear audience,” said Noah Raf who hinted that a vintage-inspired Levi’s denim collection is in the works, as are collaborations with a handful of upscale accessories brands. So is a music festival, thanks to close ties to the music industry and friends like Kygo, Kacey Musgraves and Katy Perry.

For Jiwan, LVMH linking with Madhappy indicates the corporation is “getting it” when it comes to the shift from more formal dressing to hoodies, jeans, T-shirts and sneakers — what she referred to as the new uniform of innovation and enterprise.

“Streetwear has become all-wear,” she said of basics similar to ones sold by Madhappy, which borrow from the world of luxury with elements like hand stitching on the hoods of sweatshirts. “That’s when exciting innovation comes about. It’s when you have the legacy, the knowhow in the craftsmanship and the wisdom of these legacy players combined with the fresh insights of streetwear ... innovators.”