MILAN, Italy — Moncler is doubling down on its Instagram-friendly Genius project. Built around a series of high-profile designer collaborations, the marketing strategy boosted awareness and traffic, both online and off, for the Italian ski-wear brand in 2018.

“We have, for sure, many things to fine-tune for this year, but we started very well something very unique for the industry,” said Moncler president, chief executive and largest shareholder Remo Ruffini, a year after the launch of the project. On February 20, during Milan Fashion Week, the brand will kick off its next round of Genius collaborations in a series of tunnels at Magazzini Raccordati, next to the Central Station, that will be open to the public four days after the industry-only launch event. 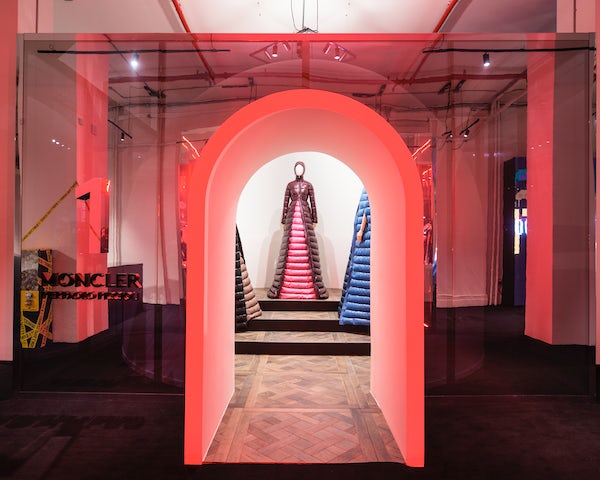 Fifteen months ago, Ruffini decided Moncler needed to increase the variety and frequency of its designer collaborations in order to attract millennial shoppers — who crave newness at the speed of Instagram and have shown eagerness for limited-edition streetwear releases — and fend off competitors like Canada Goose, Herno and Prada in the increasingly crowded market for puffer jackets, Moncler’s signature product category.

So, the brand replaced its seasonal partnerships with Thom Browne and Giambattista Valli with a much wider range of designer collaborations, released on a monthly cadence across Moncler’s retail and wholesale network, including dedicated temporary retail spaces in New York and Tokyo. But most importantly, the project resulted in a steady stream of social media content. “We want to talk with consumers basically every day,” said Ruffini.

Genius was a massive undertaking, he said. It required tighter coordination among departments, changes to company culture and heavy investment in logistics and delivery. In the first half of 2018, total corporate investment reached €14.1 million, up from €5.5 million the year before. The capital was spent on a logistics hub in Piacenza, Italy, (part of a three-year plan to spend €15 million on that centre) and the development of information technology and omnichannel platforms, among other initiatives. Moncler plans to spend about 6 percent of 2019 revenues on capital expenditure, including logistics, technology and retail expansion.

At a time when product innovation and newness are more critical than ever for reaching today’s luxury consumer, Moncler Genius has gone further than most in reimagining the way product is conceived, communicated and delivered, though Virgil Abloh’s Louis Vuitton, Burberry and Celine have also experimented with more frequent, limited-release product “drops.”

Today, brands that are failing to renew themselves continuously are falling behind competitors, said luxury analyst Luca Solca. “Genius is a powerful newness engine,” he said. “It would be all too easy for Moncler to become complacent and just focus on a narrow range of iconic styles, driving most of the volumes." Such a strategy would probably be more profitable in the short term, he said, but would lead to “brand trivialisation and irrelevance.”

The strategy appears to be working for Moncler. Online traffic has spiked, rising more than 50 percent each month since Moncler presented its first round of Genius collaborations to the media in February 2018, according to the company. Last year, about 50 percent of customers who entered Moncler boutiques to shop its Genius collaborations were new to the brand. Millennials now account for 40 percent of customers at its retail stores, an increase, according to the brand.

On social platforms, Moncler earned $15.2 million in equivalent unpaid marketing spend in the third and fourth quarters of 2018, according to marketing technology firm Tribe Dynamics. On average, that's a 63 percent increase year-over-year.

Ruffini described the programme’s first year as “a very good success.” But he plans to do some fine-tuning for 2019. “Maybe last year we rushed too much, it was too concentrated,” he said, reflecting on the cadence of the strategy. Going forward, the brand will take more time between releases and work harder to market product drops through clienteling, in-store events and digital marketing. “You need more time to explain...more time in the stores to have the possibility to talk to your customer, call them, let them understand the project," he said.

Genius may also have resonated more powerfully with men, added Ruffini, because they are more habituated to streetwear drops. “Ladies need more the seasonality,” he said. But Ruffini remains as bullish as ever on the core tenants of the project: newness and innovation. “A strong energy comes from when you mix different people, different generations, different cultures,” he said. “Our motto is one house, different voices.”