From stalwarts like T.J. Maxx and Nordstrom Rack to venture-backed newcomers and online luxury resellers, a multitude of discount retailers are all vying for a piece of the growing off-price market, which will thrive amid the lingering global recession.

From stalwarts like T.J. Maxx and Nordstrom Rack to venture-backed newcomers and online luxury resellers, a multitude of discount retailers are all vying for a piece of the growing off-price market, which will thrive amid the lingering global recession.

The distributor, which generates the majority of its revenue from passing luxury brands’ unsold products along to off-price retailers like Gilt Groupe and Saks Off Fifth, is having a banner summer. Virtually every brand is scrambling to unload inventory that failed to move during the lockdowns before the summer holiday season.

For us, it’s a very opportunistic time.

The luxury distributor, in fact, has purchased more inventory so far in 2020 than it did in all of 2019, according to Adam Freede, its chief executive.

“For us, it’s a very opportunistic time,” he said. “We are in major expansion mode.”

These are boom times in the off-price market. This industry picks and chooses from other retailers’ surplus inventory, offering consumers the promise of designer labels at bargain prices. These days, those surplus inventories are very, very high. Where a typical US clothing retailer might hold twice as much stock as they sell during normal times, today that ratio is about 15 to one, according to Bernstein. With economists predicting a long, slow recovery, inventories are unlikely to fall anytime soon.

Even before the pandemic, off-price sales were surging, rising 30 percent between 2014 and 2019, to $56 billion, according to Euromonitor. As businesses continue to reopen in the US, it’s the off-price stores like Ross and T.J. Maxx that make up the few players to see positive foot traffic since March. In a June report examining off-price saturation, Bernstein analyst Jamie Merriman found that there is enough market white space in the sector for 900 additional off-price stores in the US.

A host of new and old players are competing for those dollars, as well as the opportunities online. Mainstays like T.J. Maxx, Ross and Nordstrom Rack now compete with resale platforms such as The RealReal and Poshmark and newer ventures like Otrium and Madaluxe Vault — which Freede launched in recent years to sell excess designer items to consumers directly — that put their own spin on the off-price model.

“The landscape is extremely competitive,” Assaf Azani, vice president of 260 Sample Sale, a company that puts on sample sales for labels like Oscar de la Renta and Sandro. “Even the outlets need their own outlets.”

Off-price retailers may be bombarding consumers with promotions, but the real battle is happening behind the scenes. Discounters know they need to build lasting relationships with brands in order to secure access to the best castoffs once the current glut starts to recede. After the 2009 recession, start-ups like Gilt Groupe and Rue La La thrived, but ran into problems when the supply of unsold merchandise began to dry up, making it harder to offer the hot deals on well-known brands that initially drew customers. At one point Gilt Groupe was valued at $1 billion. But when it was sold to Saks-owner Hudson’s Bay Company, the ticket price had shrunk to $250 million — even less than the $280 million it had raised from investors. In 2018, Rue La La purchased Gilt to form a single flash sales entity called Rue Gilt Groupe.

The off-price survivors will be the ones with the best relationships with their suppliers.

While opportunities for market share in the off-price channel are bountiful today thanks to the glut of inventory created by the pandemic as well as the ongoing recession, competition is fierce. Traditional off-price players like TJX, which owns TJMaxx and Marshalls in the US and TK Maxx in the UK, have an outsized advantage in their scale and their established relationships with brands, analysts say. Resale, meanwhile, is emerging as an intriguing new draw for brands looking to offload their last-season products discreetly without appearing in a bargain bin.

“We’ve always seen people come and go in this space,” said BlueFin analyst Rebecca Duval. “The inventory [overload] will be right-sized by the first or second quarter of next year. Once that happens, the off-price survivors will be the ones with the best relationships with their suppliers.”

Brands have an interest in selling their unsold merchandise to the highest bidder. Some will spread their supply among a number of distributors rather than dump everything into one channel. But players like Madaluxe tout long-standing relationships with high-end brands, earning their trust to do the heavy-lifting itself: buying the bulk of their excess inventory and then divvying sales to a number of off-price avenues, from Rue La La to Nordstrom Rack. Off-price retailers can also buy inventory from third-party sellers, rather than from brands and their distributors directly, in what's known as the grey market. The supply chain can be very hazy, Freede said, and may involve goods passing through multiple hands.

Buyers like T.J. Maxx buy merchandise in bulk but brands will accept less money if it means getting a quick infusion of cash and immediately disposing of excess inventory, which can be costly to store.

On the other hand, brands may choose a higher-margin arrangement, in which they retain most of the profit on off-price goods while paying a third-party company to facilitate the sale. 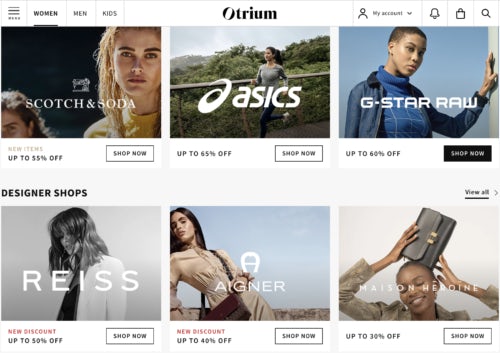 Otrium, a five-year-old company based in Amsterdam, operates a marketplace where brands can sell their surplus directly to consumers, which it says offers higher margins than the wholesale market. The start-up, which has raised nearly $33 million, takes a commission on each sale and also handles order fulfilment. So far, the company operates in Europe and has plans to expand beyond.

Otrium co-founder Milan Daniels told BoF his company offers prices to sellers that are three times as much as other stock buyers.

Azani’s 260 Sample Sale operates via a similar model in major US cities, though it limits sales to a short period of time to drive hype. This year, it began offering online sample sales as well, conducting sales on its own e-commerce platform.

The resale market has emerged as a competitor to traditional off-price retailers. Prices between the two channels are competitive, and consumers today make little distinction between purchasing a used item online and shopping at Nordstrom Rack or a sample sale.

“When someone sees something they like on sale, they will check the individual SKU to see if they can get it for cheaper, and they don’t care if it’s resale,” Azani said.

Resale sites have also quietly gotten into the business of buying stock directly from brands. A few brands, including Philip Lim, use their affiliation with resale sites as a selling point. But many brands opt to sell their unsold inventory to The RealReal because it’s more discreet; customers may assume a dress was purchased and loved by a real person, not knowing it, in fact, languished on a rack before being sold in bulk.

As with conventional off-price retailers, demand is soaring from both brands and consumers.

“We’ve had more conversations with brands in the last six months than we have in our entire 20 years of business,” said Sarah Davis, chief executive of online resale shop Fashionphile.

One challenge for resale remains: the matter of profitability.

“There’s still a lot of labour involved in processing and authenticating all of these goods, and right now, most of that process is manual,” said Merriman of Bernstein. “That’s why these [resale] models haven’t made any money.”

But once they adopt technology like machine learning to automate some of this processing, she added, resale will be an even bigger contender to off-price players.

Off-price chains like T.J. Maxx offer a different sort of discretion to brands. They rarely advertise that they have items from Nike or Gucci for sale, instead promising customers they will find coveted labels if they hunt through the racks. (Designer products are also virtually impossible to find in its online store, which currently make up about 2 percent of its sales.)

The biggest off-price retailers have another key advantage over their newer rivals: their vast store networks. TJX has more than 4,500 locations worldwide, and also owns Marshall’s, with about 1,000 locations in the US. Ross has about 1,500 stores in the US, while Burlington has a fleet of about 730 stores.

“If you’re a brand and you have, say 10,000 units to sell and [T.J. Maxx] has 5,000 stores, they can split up this supply so that there’s only two of that item in every store,” Merriman said. “It goes back to the treasure hunt proposition as opposed to looking like you just dumped 10,000 units onto the market.”

These large retailers also have relationships with fashion companies that go back years or even decades. And though they were forced to close their stores during the lockdowns, off-price retailers have bounced back faster. Data from retail analytics platform Placer.ai shows that year-over-year foot traffic is down about 20 percent for T.J. Maxx in June, while Macy’s has averaged at more than a 40 percent decline in the same period.

There are so many discounts being offered that brand loyalty just isn’t as strong as it once was.

Where smaller competitors have an advantage is product assortment. While it’s not unheard of that Fendi and Off-White would show up in T.J. Maxx, such high-end product offering for the mass retailer, whose average order value is in the low two-digits, is still rare.

Distributors like Madaluxe, meanwhile, can boast consistent new offerings from brands like Valentino, Balenciaga and Saint Laurent. Azani from 260 Sample Sale also underscored the importance of an exclusive assortment.

Especially in everyday casual wear, Azani added, “there are so many discounts being offered that brand loyalty just isn’t as strong as it once was.”

Ultimately, as with any industry, the bigger the better.

“The biggest players in off-price are best positioned,” Merriman said, pointing to TJX. “And given the unprecedented amount of inventory out there, I think they will do very well in this environment.”

What to Do With All That Excess Inventory

Luxury Brands Found a Solution for Their Inventory Glut. But Will It Backfire?

How to Prepare Your Business for a Post-Pandemic World