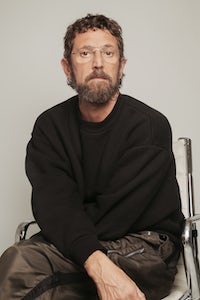 Discover the essential tools for successful entrepreneurship in BoF’s Start-Up School: a resource comprised of a practical guide on topics ranging from fundraising and finding product-market fit to planning an exit; along with supplemental tools, templates and frameworks. Become a member to access.

MILAN, Italy — Stefano Pilati has come to Milan to talk, but it’s Berlin, where the Italian designer has lived since 2016, that’s on his mind.

“One day I was going into the Berghain,” he says. “The selection at the entrance is notoriously hard and the bouncers, ominous with all their tattoos, can be frightening. As I got security-checked, the guy lingered on my trousers and uttered his approval. I was smitten.”

Berghain — a temple of techno-hedonism set in a former power station in Berlin — has one of the toughest doors of any nightclub in the world. And yet it is also paradoxically democratic. Its grim-faced gatekeepers are allergic to big-brand luxury, making the club an apt metaphor for Pilati’s trousers and Random Identities, his new fashion venture for which he designed them.

Called “Berlin Baggies” and sold online for $220, the nylon fatigues feature a drawstring at the hem and a concealed zippered vent in the back. The detail is designed, Pilati explains with a laugh, to be both practical and kinky: particularly useful for the gender-neutral toilets of Berghain where anything goes. They are certainly a long way from the pieces he designed for French luxury house Yves Saint Laurent, where he was creative director from 2004 to 2012. Ditto the Italian suiting powerhouse Ermenegildo Zegna, where he designed Agnona and then Zegna Couture until he split with the group in 2016, triggering a rethink of his life and work, and his move to Berlin.

“After Zegna Couture, nobody called me for any of the top jobs,” reveals Pilati. “I was surprised, but only up to a point. I have a reputation for being difficult, just because I know what I want and I am stubborn about getting it.” So, fed up with the fashion system and wanting to reach a new audience, Pilati decided to launch a new label from his new base in the German capital.

I can operate in my own bubble and do my own thing the way I want to do it, at my own pace.

Through club culture, the designer immersed himself in the city’s creative milieu, building a clique of like-minded peers. “I never took part in any kind of nightlife when I was younger,” says the designer, who is 53. “In Berlin I can, and it is enormously rewarding. Right now, being out of the fashion mainland is a conscious decision,” he adds. “Berlin is a city with a modern mentality. It is a free place for free thinking where creativity runs loose, and life is relatively easy. I can operate in my own bubble and do my own thing the way I want to do it, at my own pace.”

Random Identities employs just eight people in Berlin, far fewer than Pilati would have had in his former jobs. Andrea D‘Ippolito, who acts as Pilati’s chief executive, is based in Milan with a five-person team managing logistics and administration. But Pilati brings a wealth of experience to the fledgling label, with over 30 years spent working at the top of the luxury fashion game, at Yves Saint Laurent and Zegna, but also at Giorgio Armani, where he got his start as an assistant in the men’s ready-to-wear department, and at Prada and sister label Miu Miu.

Pilati says the embryo of Random Identities was conceived back in 2015, while he was still at Zegna. At the time, he called the concept Random. After Zegna, he says he approached a major European fast-fashion giant to bring the project to life, and received enthusiastic feedback, but the deal never materialised and Pilati decided to go solo.

“The only other option was to do it by myself,” he says.

Random Identities started in 2017 on Instagram, where Pilati has built a small but dedicated following. (The designer’s personal account currently has 28,400 followers, while Random Identities has 11,000 followers). The line, priced $90 to $850 for clothes and $80 to $335 for accessories and footwear, launched commercially in late 2018 on the millennial-friendly, Canadian fashion e-tailer Ssense, after an introduction from Joerg Koch, editor of 032, editor-in-chief at Ssense and part of Pilati’s Berlin family. According to recent filings made in Italy, Random Identities, though initially self-funded by Pilati, is now 50 percent controlled by the designer via German company SP Holding and 50 percent controlled by Atallah Investments Inc., whose shareholders are Ssense co-founders and brothers Rami Atallah, Firas Atallah and Bassel Atallah.

I basically want to convey this idea of daily restart through our look.

“Random Identities is the first time Stefano does not have to answer [to] the codes of a house and has the opportunity to write his own,” says Rami Atallah, who is also chief executive of Ssense. “When he shared his vision with me, we found a common view on how a brand could break the constraints of the fashion paradigm, such as the price-value equation or the ability to merge content and commerce, through a digital-first approach. We created a platform for the brand to reach its customers faster, respond to what they want more quickly and create content and product that truly speaks to a new generation.”

Indeed, the data-savvy Ssense supported the brand’s debut by buying into the label and staging a launch event in Montréal, but also by sharing direct customer feedback of a kind Pilati had never had in his previous roles.

And yet, conceptually, Random Identities is deeply personal: the collection stems from Pilati’s own obsession with fashion and the act of dressing. “Every morning, when we choose what to wear and how to wear it, we basically define a new public identity for ourselves,” he explains. “These identities are based on intuition, need, taste, but the shape they take is totally random. Hence the name: I basically want to convey this idea of daily restart through our look.”

The beating heart of Random Identities is inside Pilati’s Berlin apartment, and not just because the design studio is on the top floor of the same building. The collection is rooted in Pilati’s notoriously large personal wardrobe. In an open letter published on Ssense to coincide with the launch of the label, Pilati states: “My archive is vast. It isn’t, in fact, an archive, it is my daily wardrobe. This is where I test the personality of the clothes, my interaction with them from a new perspective, based more on the relevance of the garment’s functions than strictly consumption. That is my starting point and the core of my project. If I don’t feel it, I won’t do it.”

Fans of Pilati’s designs will immediately recognise his hand: the volumes, strictness and twisted functionality speak to his signature. There is a militaristic streak as well as fetishistic touches, exemplified by the Prince Albert piercings on belts and necklaces. Another pièce de résistance is the label’s worker boot, with its five-inch heel, which captures the line’s gender-fluid tone. The colour palette is strong on black, grey and military green. In sum, despite its digital communications and distribution strategy, it’s the furthest thing from an Instagram brand, based on strong design, rather than on high-visibility graphics or empty communication tricks. “I am not interested in bold slogans and declarations. I am interested in making clothes that engage people,” explains Pilati.

The designer has been using social media to dialogue with consumers and often responds to direct messages himself. “I am the one taking charge of customer care,” he quips. Once used to the lavish resources of conglomerate-backed luxury brands, the designer is certainly taking a more pragmatic approach to his start-up. Consider the label’s logo: a simple black bar. It was developed after an early design was rejected mid-production. To avoid ditching pieces that had already been made, the designer used a black line to cover up the old logo, and the brand’s current insignia was born.

Product drops periodically on Ssense, Pilati’s sole digital distributor — offline, it is available only at Dover Street Market. The drop-based approach was a big shift for the designer, who had never worked outside the traditional ready-to-wear system before. “This structure means a radical change for me, as I have to not only design pieces, but to pre-produce them, in order to be ready to deliver,” he explains.

With the label still in its infancy, Pilati declined to reveal sales figures, but customers seem to be responding to the designs as well as the favourable price-to-quality ratio, and Atallah is certainly bullish on its future prospects. “Stefano has already created a number of iconic items, including the worker boot and the duvet jacket, which are selling so fast that it is difficult to keep them in stock,” he testifies. “We believe Random Identities can become a top five brand on the Ssense platform within a few years. Stefano has been able to create a strong and very distinct aesthetic, which feels refreshing at a time when there’s a lot of sameness.”

“Random is my way of living,” says Pilati.