Proenza Schouler and the Investment Paradox

Young designers are encouraged to raise money to help fuel growth. But finding the right backer isn’t so easy.

Proenza Schouler and the Investment Paradox

Young designers are encouraged to raise money to help fuel growth. But finding the right backer isn’t so easy.

Looking on, Proenza Schouler designers Jack McCollough and Lazaro Hernandez took to a greenery-backed stage to celebrate this year's winner, not looking a day older than when they won the inaugural award back in 2003. But how their lives and business have changed. Their entrance onto the global fashion scene kickstarted a new era in fashion when young upstarts were made to believe they could compete against the major European fashion houses, just as long as they received the necessary funding to fuel growth.

It was a significant departure from the way the fashion business once worked. Marc Jacobs, John Galliano and Alexander McQueen were in business for many years before big-league investors paid attention to them. Jacobs and Galliano both faced the brink of bankruptcy more than once. Proenza Schouler, on the other hand, received its first investment in 2007, when Valentino Fashion Group took a minority stake in the fledgling brand.

But when Valentino was suddenly acquired by London-based private equity fund Permira, the duo found themselves with new owners who had neither the interest nor time to oversee the young fashion business. Valentino's stake was subsequently bought by a group of private investors including Theory chief executive Andrew Rosen and Irving Place Capital founder John Howard. In 2015, another private equity firm, Castanea Partners, invested alongside the existing investors, encouraged by the brand’s early success in handbags. (Its schoolboy satchel, the PS1, was a certifiable hit when it was introduced in 2008.)

But competing against European fashion houses is not easy. “We don’t have this huge conglomerate behind us funding expansion, so we just can’t plop down $5 million to open a store in Paris,” Hernandez told BoF in September 2018.

For months, it had been rumoured that Castanea was looking for an out. And this week, Proenza Schouler announced that it was once again starting over, buying back the firm’s stake through the backing of a private investor. The money came from Jason Mudrick, a hedge fund owner who specialises in the “distressed debt market.” Turnaround specialist Kay Hong has been brought in as chief executive.

You could almost hear McCollough and Hernandez’s sigh of relief through their written statement, which said they were looking forward to having "full authority over our company’s destiny.”

To be sure, Proenza Schouler is in a better position than it was a week ago. But its very public financial challenges have undoubtedly had an effect on the label’s development.

Those challenges are also indicative of the harsh reality many emerging brands face as they try to scale. For the past 15 years, young designers have been encouraged to take on investors in order to grow faster. But for every success story like Thom Browne — which was recently acquired by Ermenegildo Zegna for around $500 million — there are far more Proenza Schoulers.

Many of the industry’s most promising labels have closed down — including Thakoon, Jonathan Saunders, Peter Som and  Suno — after an initial investment either sputtered out or backfired. Others, including Derek Lam, have bought back their labels. And others like Band of Outsiders have parted ways with their founders. More recently, Kering pulled out of its investment in Christopher Kane, while Roksanda investor Eiesha Bharti Pasricha is said to be mulling an exit.

This, of course, is how investing works. People take bets, and a lucky few of those bets pay off. But fashion brands, which take time to build properly, pose unique challenges. Private equity firms in particular expect a brisk return — typically three-to-five years — and big conglomerates often prioritise their time and energy on their cash cows over smaller, still developing labels. Family offices and independent investors often treat these investments as vanity projects, and become frustrated when glamorous bits are overshadowed by the un-fun tasks of balancing budgets and maintaining margins.

Does it ever actually work? Some observers point to designer Jonathan Anderson's arrangement with LVMH as a dream scenario. Anderson is developing a successful accessories business at Loewe, the Spanish leather goods house that lacked a real identity before his arrival, and helping to fill in the ready-to-wear hole left by Phoebe Philo when she left Céline. At the same time, he continues to tinker with his own line, JW Anderson, recently installing ex-Louis Vuitton communications head Jenny Galimberti as his new chief executive.

Browne, who had two different investors before partnering with Zegna, happened to find what appears to be the ideal strategic fit. His designs appeal to the young luxury consumer Zegna is after; Zegna offers much-needed operational support.

Sies Marjan, which is backed by independently wealthy Nancy Marks, seems to be taking the slow-and-steady approach to growth, putting designer Sander Lak in an enviable position.

At first glance, the conclusion to draw from these success stories is obvious: a sustainable long-term venture requires a business-minded designer (who should also be a creative genius), and an investor with the patience and self-restraint to help the creatives scale without seizing the tiller.

The number of candidates who fit either description is vanishingly small, and the chances of the right designer and investor coming together are narrower still. Add to that the current business environment, where even experienced investors and talented designers not already under the wing of an LVMH or Kering have struggled, and the odds seem insurmountable.

But the next Proenza Schouler (or the current one) shouldn't give up hope. The long trail of failed brands can act as a guide to avoiding financial arrangements that turn out to be bandaids instead of stitches. The problems that cause talented designers struggle are clear, even if the solutions are not always easy to accept for entrepreneur-artists, who feel compelled creatively to start from scratch over and over, no matter how dismal the previous outcome.

For designers in that camp, Hernandez may have the right idea when he said earlier this fall: "Maybe we’ll never be a billion-dollar brand, but maybe that’s fine. We don’t have to be.”

Because while it hasn’t been an easy road for Proenza Schouler, they are still here.

Richemont slumps as China growth slows. The company reported an unexpected decline in first-half operating profit, shares dropped the most in three years and stock fell as much as 6.7 percent in Zurich, wiping 2.6 billion CHF ($2.6 billion) off market value. This is partly due to rising costs, fewer sales to retailers and a fall in growth in the domestic Chinese market. Richemont blamed the drop in earnings on the ambitious €2.7 billion ($3.1 billion) buyout of online luxury retailer Yoox Net-a-Porter and sale of Lancel.

Canada Goose raises profit guidance after direct sales double. The brand's earnings surpassed forecasts and prompted more optimistic growth expectations for this fiscal year. Selling directly to consumers rather than through third-party retailers is paying off. Revenue from new stores helped direct sales more than double to C$50.4 million ($38.1 million). The company has recently expanded in China with stores in Hong Kong and Beijing and starting e-commerce operations with Alibaba’s Tmall.

Hugo Boss forecasts sales, earnings accelerating. The company aims to stay more on top of trends and grow online services, forecasting its own e-commerce revenue to quadruple by 2022. It expects increased sales (5 to 7 percent annually) and operating margins of 15 percent. The new forecast comes after Hugo Boss walked away from its goal of a 25 percent earnings margin in 2015 when the company’s growth sputtered out. The stock has dropped 11 percent this year.

Macy's boosts annual earnings forecast ahead of holiday season. Despite increasing competition online, the retailer beat predictions last quarter and has upped its adjusted earning forecast. As shoppers increasingly prefer to buy online and hunt for bargains, the company has been investing heavily in its mobile app and website, and revamped its loyalty programme. As a result, shares have surged 42 percent this year and net sales rose 2.3 percent to $5.40 billion.

UK retail sales unexpectedly fall in poor start to quarter. The fall was partly offset by spending in department stores and food sales, which rose 0.4 percent after a weak September, but the decline was largest in seven months. E-commerce is taking its toll on brick-and-mortar stores; the amount of money spent online has risen sixfold over the past decade and accounted for 18 percent of total sales in October.

Ruyi to slow deal pace after $4 billion global buying spree. The aspiring "LVMH of China" will slow its dealmaking after announcing more than $4 billion of overseas acquisitions in the past three years. In the future, the company will only consider buying labels that are profitable and have high growth potential. Ruyi's acquisition of SMCP SA — the French fashion retailer whose labels include Sandro, Maje and Claudie Pierlot — has increased SMCP's online sales in China by 40 percent to 50 percent this year. 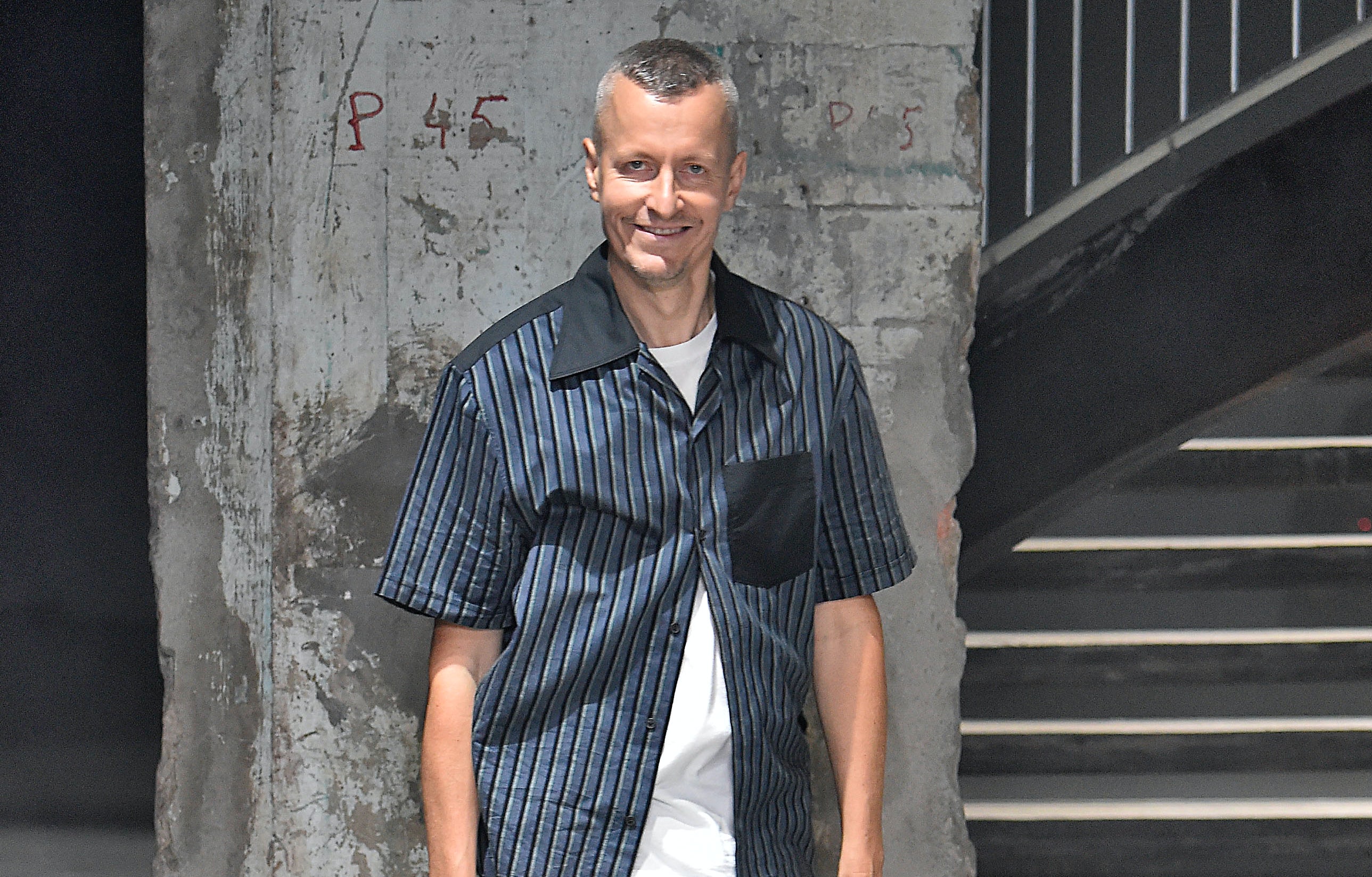 Lanvin readies for creative reboot. Lanvin’s owner Fosun International reshuffles the label again with Lucas Ossendrijver departing after 14 years designing menswear. While a replacement has not yet been announced, market reports suggest that Loewe’s Bruno Sialelli is in the frame to take over. The company has been staging a comeback since Fosun International's majority stake acquisition in February, however the leadership shake-up casts uncertainty over its future.

Victoria’s Secret lingerie chief executive resigns. Jan Singer has stepped down after two years of running the $4 billion lingerie business; the former head of Spanx joined Victoria’s Secret in September 2016. The company has been under scrutiny for failing to keep up with shifting consumer demands, especially involving themes of female empowerment and diversity. Stock price is down about 39 percent this year to date.

Stefano Pilati returns to fashion with label Random Identities. After nearly three years away from fashion, Pilati is back with his own label, channelling utilitarian, affordable clothing. This follows his 2016 departure from his role as head of design at Ermenegildo Zegna and, before that, as creative director of Yves Saint Laurent — a position he held for eight years.

Alibaba sets Singles' Day record with $31 billion in sales. The e-commerce giant logged 213.5 billion Yuan ($30.7 billion) in sales for its annual Singles’ Day extravaganza, reporting that Xiaomi, Apple and Dyson were the top three brands in early sales. Alibaba surpassed the 100 billion yuan mark less than two hours into the day, according to their website. With a cooling economy, saturated markets and competition from smaller platforms such as JD.com and Pinduoduo, the record was important for billionaire co-founder Jack Ma and chief executive Zhang.

Amazon and Asos quizzed by lawmakers over fast fashion's sustainability. The UK government’s Environmental Audit Committee has written to five online-only fashion retailers, including Amazon and Asos, about the impact of their production processes amid concern over the sustainability of cheap fashion garments. While Amazon has not commented, Asos has said they are looking forward to working with the committee.