With new collection Dyvna, Shirley Cook is looking to solve a problem for consumers who don’t want to spend thousands of dollars on a dress. Here’s her plan.

With new collection Dyvna, Shirley Cook is looking to solve a problem for consumers who don’t want to spend thousands of dollars on a dress. Here’s her plan.

NEW YORK, United States —  In the 13 years she spent at Proenza Schouler, Shirley Cook grew up. She started out in 2002 as a novice co-founder and exited in 2015 as a seasoned chief executive, ushering the New York-based label through some major milestones, including investments from two different private equity firms. By the time Cook left the business in 2015 after Boston-based PE firm Castanea Partners took a minority stake in the brand, she had witnessed firsthand the engine of fashion shifting from creative dressmaking to accessories sales. (After all, it was Proenza Schouler’s hit PS1 bag, not its clothes, that generated real revenue for the brand.)

During her hiatus from fashion, Cook consulted here and there and gave birth to her first child. But she also spent time observing the transformation of the market, from the rising price of designer goods and the dominance of LVMH and Kering to the rise of direct-to-consumer brands and the hollowing out of the middle market. Missing, she came to believe, are good quality clothes that aren’t inexpensive, but aren’t inaccessible either.

“Just being a pure consumer, I would go out and everything that I liked was two or three thousand dollars,” she told BoF. “You don't always want to spend that much on clothes.”

Cook set her eyes on the middle-market opportunity, developing Dyvna, a collection of moderately priced, moderately trendy dresses that is named after her maternal grandmother. It officially launched at Nordstrom and Net-a-Porter on February 17, with four collections planned for 2020 and an extension into knits and separates in the third drop.

Shea Jensen, Nordstrom's general merchandising manager for women's apparel, told BoF via email that the department store, in its effort to feed its customer's desire for newness, picked up Dyvna because of Cook's no-nonsense concept: standout prints, easy silhouettes and a variety of use cases.

Cook is taking a traditional approach to distribution. But there’s plenty about her strategy that is novel, from the marketing to Dyvna's corporate structure. The question, of course, is whether it will work.

It’s pretty clear that the fashion industry has an opportunity to focus more on solving problems for customers.

“It’s pretty clear that the fashion industry has an opportunity to focus more on solving problems for customers rather than just producing more brands and labels that simply claim to be a better fill-in-the-blank — price, quality, fit — dress,” said Ari Bloom, a retail executive who has invested in early-stage fashion brands. “While the single category focus is a very good strategy on which to build a credible and defensible position, the product should truly provide some objectively unique proposition that markedly differentiates it, and services a broad-based customer need.”

Cook broke down her plan for BoF: 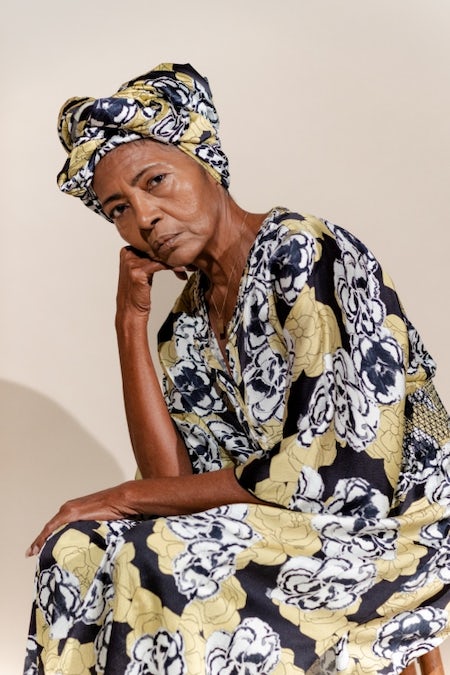 When Cook was working in the designer fashion space, the dresses she would sell often cost well over $1,000. (Some hit the five-figure marker.) After leaving Proenza and spending more time shopping other brands, she identified a missing element in the vast sea of product on the market: dresses that fit as well as designer styles but were easier to afford. When she did shop the middle market, “I was not impressed with the prints and thought that the fits were not that great,” she said. “I didn't understand, because it doesn't cost more to have nice prints and it doesn't cost more to make things fit nicely.”

Her solution: Dyvna’s first collection of 23 dresses, which feature original prints and ready-to-wear-worthy silhouettes, starts at $495 for a mini dress with double-ruffle sleeves and tops out at $785 for a chiffon-trimmed shirt dress in floral hammered silk.

In order to achieve the mix of exceptional fit and affordability that she wanted, she partnered with Newtimes Group, a manufacturer and supply chain manager recommended by Nordstrom. (Like every founding employee, Newtimes has an equity stake in the business.)

“I send them a fabric that's obviously too expensive and they come back with something that’s the best thing in my price range, and I would never have known there is a $40 difference in these fabrics,” she said. Her core team all comes from the high-end of the market, which helps to achieve the sharp fit and design she’s after.

From the start, Dyvna will be available up to a size 18, with plans to extend sizes further once Cook gauges demand. While most designer brands still only offer their main collection up to a size 12, extending sizes is becoming a priority for many, thanks in part to the success of plus-size luxury e-commerce player 11 Honoré. Cook isn’t yet selling to 11 Honoré, but she wanted to start off right and sell as many sizes as possible: “It’s really silly that the market is so small."

After she created a fundraising deck for Dyvna, Cook met with investors in her network, including friends and family and even private equity funds. In the end, she chose one independent investor: Portland, Oregon-based philanthropist Allie Furlotti, and raised a small seed round. (Cook would not disclose the dollar amount.)

“[Furlotti] is a serious investor who can read a business plan and a spreadsheet; she understands numbers and understands financial terms,” Cook said. “I feel very happy having someone by my side in that respect, too.”

Today, the emphasis in fashion is on direct-to-consumer sales, which not only allow the brand to build a one-on-one relationship with the customer but also promise a wider profit margin. But launching as a direct-to-consumer brand is expensive, requiring an upfront investment in inventory, as well as online acquisition and marketing. Instead, Cook chose two partners — Nordstrom and Net-a-Porter — both of which she had worked with before while at Proenza Schouler.

I don’t want to get lost in the noise.

“Until I have a really firm understanding of who my customer is and what’s appealing to them, I’m not okay to put in a multi-million investment in inventory,” she said. “Until then, the wholesale model is really beneficial to us.” Not only do wholesale partnerships provide instant distribution, but they serve as a marketing platform, too: “It’s really hard right now if you don’t have giant partners,” she added. “I don’t want to get lost in the noise.”

Distribution isn’t just about partners though, it’s about how much you sell to those partners. One of fashion’s biggest challenges is extra inventory: what to do with it, and how to reduce so there aren’t so many markdowns at the end of the season. Because Cook’s manufacturer has an interest in the business, there is an incentive to work with her on less-wasteful solutions. For now, all products are cut to order.

Instead of hiring a traditional public relations firm, Cook is partnering with Walkup Studio, a strategic agency that puts social media first. Interviews with Cook were offered to only two outlets — BoF and American Vogue. Instead, Walkup focused on creating digital content and seeding product with a network of like-minded individuals with online followings who can serve as mini microphones for the brand.

“We're staying away from the stereotypical influencer model,” said Walkup Co-Founder Alyssa Reeder, who emphasised that there will be no paid partnerships. “The press and social strategy will be much more streamlined, giving the audience a direct line to the brand, the process, the inspiration.” Walkup is also an equity shareholder in Dyvna.

Cook’s six co-workers — including her PR and marketing team — are all shareholders in Dyvna. (Like many startups, the equity stakes vary.) This sort of arrangement may be commonplace at tech startups, but it’s still rare at a fashion brand. “I didn’t want to have employees,” she said. “I wanted everybody really moving toward the same target. Everybody wants to be cost-conscious, everybody wants to promote the business in the right way. Everybody sees the effectiveness of every move that’s taken.”

Cook has also forgone a centralised office, saving money and allowing her small team to work remotely. “One thing the company really affords people is a work-life balance,” she said. “Because I'm not trying to do so many things and because we have the best people involved, decisions are made very precisely. It provides you with a lot of freedom.”

Proenza Schouler: ‘We Don’t Have to Be a Billion-Dollar Brand’