Reality Check: Fashion’s Crisis Is Far From Over

This week, brands and retailers made a series of grim announcements as lingering hopes for a V-shaped recovery from the Covid-19 crisis evaporated.

Reality Check: Fashion’s Crisis Is Far From Over

This week, brands and retailers made a series of grim announcements as lingering hopes for a V-shaped recovery from the Covid-19 crisis evaporated.

As flagships reopen and fashion shows are scheduled for September, it’s easy to believe the industry is re-emerging from the Covid-19 crisis.

“We all want this to be over. We all want to get on with our lives. But the hard reality is this is not even close to being over,” said the Director-General of the World Health Organization, Tedros Adhanom Ghebreyesus at a press conference earlier this week, as the number of coronavirus infections recorded worldwide surpassed 10 million. “Although many countries have made some progress, the pandemic is actually speeding up,” he warned.

In the US, still the world’s largest consumer nation, where the government has mismanaged the pandemic, the situation is particularly dire. Facing a record rise in new cases, the country’s top infectious disease expert Anthony Fauci said the effort to contain Covid-19 was “going in the wrong direction” and many American cities, states and businesses are reversing course on reopening, threatening what was already shaping up to be a fragile economic recovery.

This stark reality is sinking in with the country’s fashion industry, which is moving ahead with a second wave of cuts, having suffered severely from months-long store closures and a precipitous drop in consumer demand for non-essential goods.

On Tuesday, the Seattle Times reported thousands of job cuts at luxury department store Nordstrom, which was comfortably profitable before the crisis. The next day, Michael Kors owner Capri Holdings said it expected to see a 70 percent drop in first-quarter revenue. The company, which also owns Versace and Jimmy Choo, may permanently shutter up to 170 stores over the next two years and cut spending by $150 million in fiscal 2021.

Also on Wednesday, the nation’s largest department store Macy’s reported a 45 percent decline in first-quarter sales, while net quarterly losses soared to $3.6 billion. The move came about a week after the company said it would cut 3,900 corporate jobs in a bid to save cash.

In the UK, the economic picture is also grim. Next month, the government will start winding down the furlough programmes which pay millions of workers up to 80 percent of their wages, presenting employers with tough choices. This week, department store Harrods said it would cut 14 percent of its 4,800-person workforce, or 672 jobs, while Arcadia Group, which owns Topshop, said it would shed about one-fifth of its head office staff, or about 500 jobs.

At a virtual shareholder meeting on Tuesday, French luxury colossus LVMH, a bellwether for the sector, signalled lasting impact to its performance as a result of the pandemic after sounding a more hopeful note in April. “We can only hope at this point for a gradual recovery,” LVMH Chairman and Chief Executive Bernard Arnault told shareholders. While Arnault noted “quite vigorous” signs of momentum in June, as lockdowns lifted in major luxury shopping hubs like Paris and Milan, he predicted painful second quarter results in Europe and the US.

The US economy added 4.8 million jobs in June, gaining ground for a second month in a row after shedding some 20 million jobs in April, according to employment data released by the country’s Department of Labor on Thursday. But with Covid-19 cases spiking in several American states and some businesses in populous states like California and Texas being forced to close once again, the picture is darkening. Earlier this week, Dr Fauci warned the US Congress that new coronavirus cases in the country could hit 100,000 per day.

In China, the world’s second-largest consumer market and by far the primary driver of luxury sector growth, the government has handled the crisis better than Western governments and the rebound in luxury sales since the relaxing of social distancing measures has been impressive (at least at first glance). But earlier this month, a new outbreak of Covid-19 cases in Beijing, which until June 12th hadn’t registered a locally transmitted case for two months, has prompted new restrictions and dented consumer confidence, underscoring the fragility of the recovery.

Ultimately, the world has only one real “off ramp” from the Covid-19 pandemic: a vaccine. According to the World Health Organization, researchers are progressing at record pace and have developed more than 140 candidate vaccines. At the front of the pack is a team at the University of Oxford, whose vaccine is currently going through late phase clinical trials. Meanwhile, a vaccine developed by Chinese company CanSino Biologics and the Beijing Institute of Biotechnology, which showed promising results in early testing, has already been approved for military use.

It’s unclear how many of the world’s more than seven billion people would need to be vaccinated to achieve herd immunity, effectively stopping the spread of the disease, but epidemiologists estimate it’s 60 to 70 percent of the population, though recent data in the US suggests the figure may be more like 85 percent. Whatever the number, the reality is: even after an effective and safe vaccine is found, manufacturing and distributing the billions of doses necessary to stop the pandemic could take years, during which time we’re simply going to have to live with Covid-19.

This means a deeply uncertain economic trajectory, as the virus ebbs and flows, businesses open and close to meet the shifting threat and consumer confidence hangs in the balance. As lingering hopes for a V-shaped recovery evaporate, economists say the current picture looks more like a reverse square root symbol: a partial rebound, followed by a long plateau. 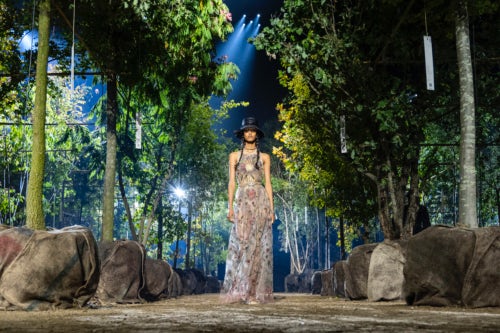 LVMH anticipates a hit to second-quarter earnings. "We can only hope at this point for a gradual recovery," LVMH Chairman Bernard Arnault told investors, adding that brands will be particularly impacted in Europe and the US due to extensive lockdowns. Arnault also said June showed signs of recovery and that the second half of the year looks more promising. Even so, finance chief Jean-Jacques Guiony said the fallout would still be felt in the months to come but that it was impossible to make definite projections.

Capri Holdings Limited forecasts 70 percent fall in current-quarter revenue. The Michael Kors owner said the Covid-19 pandemic has hammered demand for its handbags and dresses. Analysts had previously forecast a 46.7 percent fall in current quarter revenue. This is significantly worse than the previous quarter ended March 28, which saw a total revenue decline of 11.3 percent to $1.19 billion in the three months.

Diesel CEO seeks to revive 90s success with slimmed down brand. Diesel has over the last decade lost its cool, sending the US division into Chapter 11 bankruptcy last year. In a bid to reboot the business, Chief Executive Massimo Piombini has said the brand must close some of the retailer’s 436 stores worldwide, quadruple its sneaker sales which are currently at 700,000 a year, and double down on e-commerce which makes up only 12 percent sales but is recording double-digit growth.

Kanye West wants to bring Yeezy production to Wyoming. According to a report in its local newspaper, the town of Cody, with virtually no textile industry currently, is expected to produce footwear and apparel for Yeezy's partnerships with Adidas and Gap. The designer’s plans include producing one million pairs of shoes in the state by the start of next year. Apparel production is to begin “shortly after.” Yeezy has a footwear sample and prototype facility in Cody, with plans for it to be staffed in the next 30 to 60 days.

Gap to pay Telfar for cancelled collaboration. The New York designer initiated the early stages of a partnership with the American retailer before Covid-19 thwarted plans. But Gap's announcement of a new co-branded Yeezy label last week sparked uproar on social media and prompted the company to commit to a $100,000 payment.

Lululemon to buy in-home fitness company Mirror for $500 million. The deal furthers the brand’s ambitions to move beyond leggings to more experiential offerings. Mirror’s chief executive will remain at the helm of the company and will continue to operate it as a standalone business. The move comes as at-home fitness products gain popularity due to widespread social distancing measures and shuttered gyms.

Macy's posts $3.6 billion in losses. The department store chain said net sales fell to $3.02 billion in its first quarter following plans to lay off a further 3,900 employees. Macy's has been grappling with reduced footfall in areas where strict lockdowns were imposed. The retailer has turned its attention to its online business and personalised marketing, getting rid of unsold inventory and introducing new services like curbside pickup. 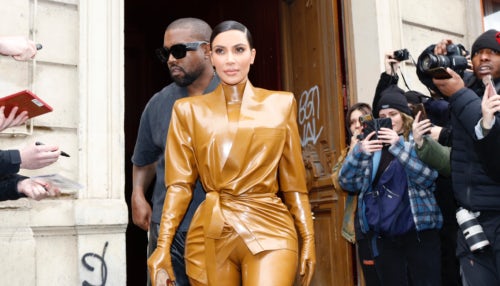 Men's makeup goes mainstream with CVS rollout. The drugstore chain is adding Stryx, a cosmetics brand for men, to 2,000 stores (about a quarter of its total). CVS is catering to the growing number of men  — about one third of US men under 45 — who said they are happy to try makeup, according to a recent survey. The move is also an attempt by CVS to double down on the $9.3 billion US men’s grooming and skincare market. 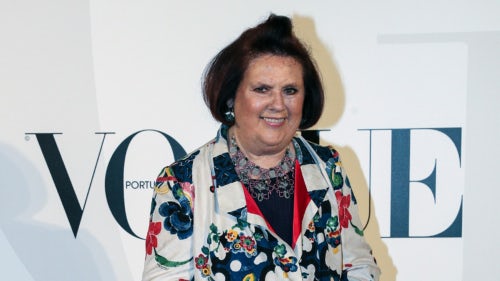 Suzy Menkes exits Vogue International. The veteran journalist, best known for her work at the now-defunct International Herald Tribune, joined Condé Nast International six years ago to lead runway show coverage and develop its live events business. Menkes, who has more than 500,000 followers on Instagram, will continue to “write, post, record and bring together the industry” via her own channels, Menkes said in an email to BoF. The annual Condé Nast Luxury Conference, which Menkes helmed, has been cancelled this year.

Tyler Haney returns to Outdoor Voices. The founder’s surprise return to the troubled activewear label after she was pushed out in February is the latest twist in the saga of the venture-backed company. Outdoor Voices received its latest round of investment from NaHCO3, an investment management platform helmed by Lunya's Ashley Merrill, which was rumoured to be under $10 million. Now, Haney and her new backers must prove they can address the label’s operational challenges. Many are betting on Merrill, who has joined the board as executive chairwoman.

L'Oréal to nominate CEO successor by autumn. The cosmetics company's Chief Executive Jean-Paul Agon said his successor should come from inside the company. Nicolas Hieronimus, L'Oréal’s current deputy CEO who was previously head of the company’s luxury division, is said to be a contender, according to people familiar with the matter. The succession comes as beauty retailers struggle to weather the pandemic, although L'Oréal has said it is already seeing signs of recovery as lockdown measures ease.

Vogue.com editor Stuart Emmrich resigns. The former editor of The New York Times Styles section joined the fashion title at the beginning of the year. Emmrich wrote to Wintour to say he wanted to return to writing “a few weeks ago,” according to a representative for American Vogue. The resignation comes at a difficult time for Vogue, which has been grappling with allegations of racial bias in the workplace.

Boohoo to investigate supply chain practices after health report. Labour Behind the Label, a garment workers' rights group, accused the fast fashion e-tailer of putting workers at factories in Northern England at risk of coronavirus infection. The allegations come after Britain imposed a lockdown on the East Midlands city following a surge of coronavirus cases. The Boohoo group said it would investigate the allegations and act accordingly.

Amazon to pay $500 million in one-time bonuses to frontline workers. Employees who have been with the e-commerce company through June will receive bonuses ranging from $150 to $3,000. The payment comes as Amazon faces growing scrutiny over its treatment of workers. Amazon workers across Europe and the US have gone on strike over poor health measures during the coronavirus pandemic.