The Richemont-owned British heritage label has been struggling to boost business performance for years. Can a former Burberry management and creative duo turn things around?

The Richemont-owned British heritage label has been struggling to boost business performance for years. Can a former Burberry management and creative duo turn things around?

While the custom of its famous owner is no doubt a boost to Dunhill’s credentials, turning around a troubled label, rooted in men’s formalwear amid a fast-growing but highly competitive and rapidly casualising menswear market, has proven to be a tough task. Dunhill was loss-making as far back as 2003 when it over-expanded and diluted its brand appeal with a plethora of licenses. It had a brief period of profitability from 2011 to 2013, when it was led by long-time Richemont executive Chris Colfer with creative direction from Kim Jones, but slipped back into the red in 2014 and has remained there ever since, according to analysts and sources close to the brand. Its missteps include over-expansion in China and a push into fashion that was incongruous with its heritage as a label for British gentlemen.

Alfred Dunhill Ltd, a UK unit, reported a widening loss of £81.5 million (about $110 million) in the year ended March 2017 according to filings at UK Companies House. Sales declined 31 percent to £50.4 million at the division responsible for the design, sourcing and global marketing of branded goods; Dunhill’s four UK stores; and wholesale in Europe, the Middle East, Africa, North America and South America. Sources close to the brand say the UK unit is a small part of the overall business not reflective of wider performance. Yet of the handful of luxury analysts who spoke with BoF, not one believes Dunhill broke even this year.

“I don’t expect that this is going to be a brilliant recovery story, at least not in the foreseeable future,” said Luca Solca at Exane BNP Paribas. As the market shifts to a more casual aesthetic and away from suits, “they are not alone among formal menswear brands who are suffering,” he added. “Clearly they have been losing a lot of money; they will probably continue to trim the business.”

The brand traces its roots back to 1893 when Alfred Dunhill took over his father’s horse carriage goods business and began selling accessories for the automobile, from dashboard clocks to Bobby Finders “binocular glasses.” He branched into tobacco, with windproof smoking pipes, lighters and then cigarettes, continuing his ambition to target refined gentlemen in their leisurely pursuits. That included clothing: the brand claims to have dressed Truman Capote in a bespoke suit for his black and white masquerade ball in 1966.

In the 1960s Dunhill was taken over by Rothmans, a tobacco firm, which was, in turn, bought out by Richemont. In 1993, Richemont divested the tobacco business to Rothmans International, later a part of British America Tobacco, while Alfred Dunhill’s accessories arm became part of Vendôme Luxury Group, alongside Montblanc and Cartier. Vendôme was later bought back by Richemont, a company better known for its core watches and jewellery businesses, where Dunhill now sits in a division labelled “other.”

The main issue is still their product and their price positioning. They are neither affordable nor exclusive and what they have to offer is bit confused.

One key issue for Dunhill has been its over-reliance on China. It was one of the earlier Western luxury entrants to mainland China in 1994, having opened in Hong Kong in the sixties. Today, Asia is still its largest market. But by 2013, luxury goods sales growth in China had flattened thanks to a government crackdown on gifting and a preference for spending overseas. That forced Dunhill to drastically scale back stores, including all 42 franchise Chinese outlets. By September 2017, the brand had gone from 192 stores globally in 2016 to just 93 stores. And yet, as China rebounds, with Bain estimating local purchases by Chinese boosted sales in the country by a 15 percent last year, Dunhill has failed to reap the benefits.

The brand has also had challenges with product and positioning, argue analysts including John Guy at Mainfirst Bank. Dunhill has long sponsored the Alfred Dunhill Links Championship golf event, where professionals like Rory McIlroy and celebrity amateurs like Ronan Keating compete side-by-side. In 2016, it launched a golf range. Mr Porter sells its £100 polo shirts. But that's in sharp contrast with its mainline range where a Kensington fit silk dinner jacket in dark navy sells for £1,395, leather Oxford brogues are £440 and a Cadogan rucksack is £850.

“The main issue is still their product and their price positioning. For me they are overpriced. They have cross-over with Hugo Boss with athleisure, with golf, but they aspire to be in a competitive leather goods category where they are not Berluti either,” explained Guy. “They are neither affordable nor exclusive and what they have to offer is bit confused. They need to move one way or the other. Significantly more upscale is difficult because they are not Saville Row.”

Dunhill also needs to embrace the digital know-how of successful menswear brands. "Richemont haven’t been very good at communicating digitally with younger consumers across jewellery and watch brands, so where will a brand like Dunhill learn it from?" said Zuzanna Pusz, an analyst at Berenberg Bank in London. "The menswear space is not easy. Look at brands like Hugo Boss and Armani, which have been struggling for some time now. It's just much more crowded than before. We're seeing this increased casualisation of clothing, newcomers like Suit Supply taking market share, so Dunhill is in a tough place.”

“It was one of great British brands that had maybe lost its way; it had fallen into the trap of fashion rather than respecting its own code and customer base,” said Jason Beckley, who was global marketing director at Dunhill until 2013, reporting to chief executive Chris Colfer. He is now chief brand officer at Clarks, the £2 billion British shoe company.

“Dunhill had a load of European small independent wholesale distributors selling lighters and pen refills, it didn’t have any core business left,” Beckley continued. So, they set about buying back inventory and expanding leather goods and core products like classic white shirts and woollen trousers. “But that executive team came and went and they went back to trying to do fashion again and that’s where the wheels came off the wagon.”

After Colfer left, ex-Furla executive Eraldo Poletto took over but quickly exited the label. In June 2013, Fabrizio Cardinali stepped in from Richemont brand Lancel as part of renewed push at the luxury conglomerate’s fashion and soft luxury brands. He was intent on turning Dunhill into a fashion brand, returning Dunhill to the London men’s fashion week roster and luring creative director John Ray, formerly of Gucci. But it didn’t revive the ailing brand and Cardinale left last year.

The latest resuscitation attempt comes with Andrew Maag, bought in at the beginning of 2017 from Burberry, where he spent 10 years, most recently as chief executive for Europe, Middle East, India, Africa and the Americas. He hired former colleague Mark Weston as creative director, who presented his latest collection at Paris Fashion week on Jan 21. The first look mixed a tweed tracksuit with a formal overcoat, while a blue ink leather shirt with tie was tucked into leather trousers and chunky Chelsea boots followed. The key challenge will be whether Weston can bring some flair to the ailing label while remaining true to its core DNA. 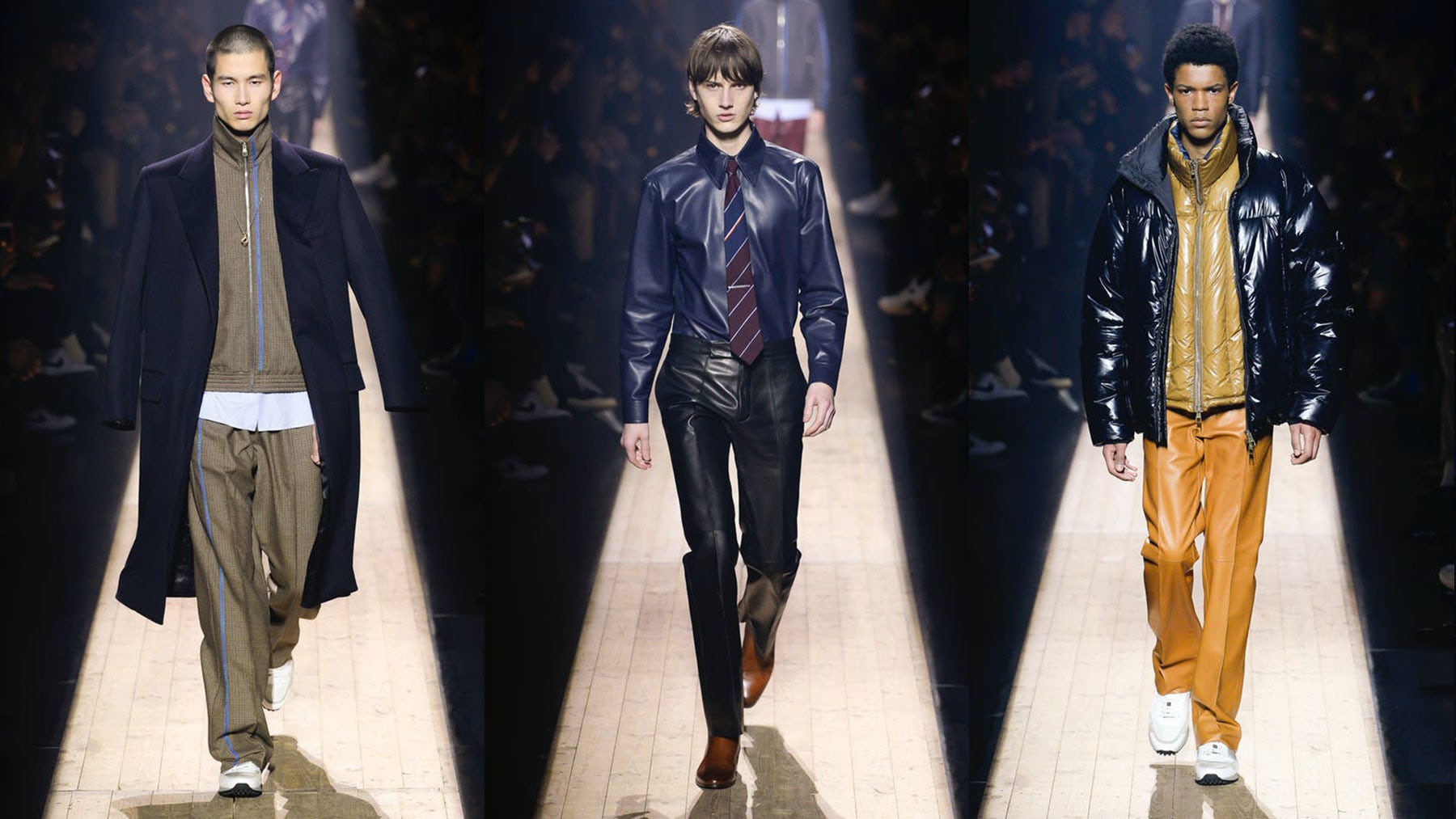 Maag meanwhile has been buying back inventory, closing stores and focusing on leather goods, an evergreen product less influenced by fashion trends. He is also refurbishing existing stores to make them bigger and more experiential and extending the online offering. He has added more frequent menswear capsule collections to stores and made some key hires including Gucci’s general brand manager Mathieu Kraut as Americas brand president to drive US retail and wholesale expansion.

Can they move the dial on a floundering brand?

"The strategic moves on paper are pretty good but we have to see what will be the result in the market," said Mario Ortelli, head of the luxury good sector at Sanford C. Bernstein. "The future? I don’t know if Richemont will give it another a try."

"Are there signs of Dunhill becoming a great turnaround story and coming back to the market?" asked Pusz. “I don’t see it yet.”