Three years after LVMH acquired the hardside luggage maker, Chief Executive Alexandre Arnault aims to move the brand beyond the baggage carousel and hit €1 billion in sales, all while building a ‘case study’ for a new way of working.

Three years after LVMH acquired the hardside luggage maker, Chief Executive Alexandre Arnault aims to move the brand beyond the baggage carousel and hit €1 billion in sales, all while building a ‘case study’ for a new way of working.

Paris, France — Did LVMH buy Rimowa for the wheels?

That’s the word on the street amongst some industry insiders, who suggest the brand’s high-tech wheels could end up on Louis Vuitton luggage in the near future. The German hardside-luggage maker’s 360-degree wheel technology is certainly nothing to sniff at: hundreds of online reviews praise the smooth ride they deliver when you’re manoeuvring your hardcase through the airport.

But it’s doubtful Rimowa’s wheels alone were worth the €640 million LVMH spent to acquire an 80 percent majority stake in the brand in 2016. While other brands in the group are using some elements of the manufacturer’s proprietary technology in their products, the wheels remain exclusive to Rimowa for now. Besides, LVMH's ambitions for the brand are far wider.

Indeed, it's a good time to be Rimowa. Founded in Cologne, Germany in 1898, the company is uniquely positioned to benefit from the shift in discretionary spending from things to experiences, especially travel. 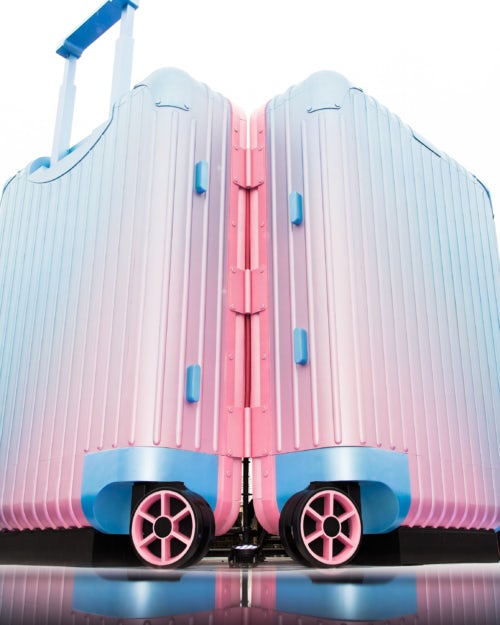 In 2018, tourists made 1.4 billion international arrivals, up 6 percent from 2017 and significantly outpacing the 3.7 percent growth in the global economy that same year, according to the World Tourism Organization, a United Nations agency. Chinese tourists are driving the uptick. While the World Tourism Organization says that just 9 percent of Chinese citizens owned a passport in 2018, about 149.7 million Chinese residents took international trips in 2018, up 1,326 percent from 10.5 million in 2000.

All those tourists need suitcases. So, it’s no surprise that global sales of luggage are forecasted to reach $27.5 billion by 2025, up from $22 billion this year, according to market research firm Euromonitor International. What’s more, for upwardly mobile Millennials, luggage is a new status symbol: something covered on Highsnobiety and Hypebeast alongside luxury streetwear and sneakers. For them, suitcases are fashion and Rimowa makes the coolest of them all, far more broadly desirable than niche players like Globe-Trotter and mass brands like Tumi and Samsonite.

Away, a New York-based direct-to-consumer travel start-up that was valued at $1.4 billion in May 2019, presents the biggest challenge to Rimowa. Away’s hardside bags — which now include aluminium — cost roughly a third of Rimowa’s products. (A large aluminium carry-on from Away is $495, while Rimowa’s comparable Original Cabin Plus bag is $1,250).

Rimowa Chief Executive Alexandre Arnault acknowledges that Away — which reportedly generated around $150 million in sales in 2018 — has captured a lot of attention in the US, especially among young professionals not quite ready to trade up to Rimowa. But he is not convinced that the customer overlap is high.

“They are the loudest ones in the US now, and we’re happy to have them shine a light on the category,” Arnault said. “But we’re very different brands in terms of quality and design. They’ve done a great job building this brand from scratch, and we’re completely coexisting.”

Over the past three years, Arnault has been working to transform Rimowa’s own position in the market. With the support of former Chief Brand Officer Hector Muelas (who departed for Apple in June 2019), Arnault has worked to boost Rimowa’s cool by animating what he describes as a “bit cold, geometric” product through storytelling. Rimowa has a lot of famous globe-trotting fans, many of whom wrote to Arnault after the acquisition, declaring their devotion. He enlisted several of them to appear in advertising campaigns, including Roger Federer, LeBron James, pianist Yuja Wang and Louis Vuitton men’s designer Virgil Abloh. He has also launched collaborations with Abloh, Supreme, artist Alex Israel and Dior men’s designer Kim Jones.

These partnerships have attracted the young streetwear crowd, earning plenty of media coverage. But while Millennials are set to account for half of luxury spending worldwide by 2025, Arnault insists he’s not chasing a demographic.

“One thing we have voluntarily never done is have a collaboration committee where we say, ‘Okay, we need to target 18-34-year-olds that have this net worth because we need to be cool with Millennials,’” he said. “A lot of brands are doing that today. As a Millennial myself I think it’s very dangerous and scary, because when a brand targets me like this, I feel it immediately and I kind of run away.”

In 2015, the year before LVMH bought Rimowa, it generated €440 million ($488 million) in sales. In its first two years as part of the group, Rimowa’s sales contracted as Arnault exited hundreds of unfavourable wholesale arrangements. At the time, it had more than 5,000 points of sale, many of which were independent travel stores, which could price the product any which way they like. (About 85 percent of the business was done through wholesale or franchise partnerships.) This meant that pricing was wildly inconsistent. A case could be €800 ($887) in one place, €400 ($443) in another. Arnault pulled the product out of the majority of those stores, buying back about half of the inventory, and recalibrating prices so that they were better harmonised. (Prices have increased an average 20 percent overall.) 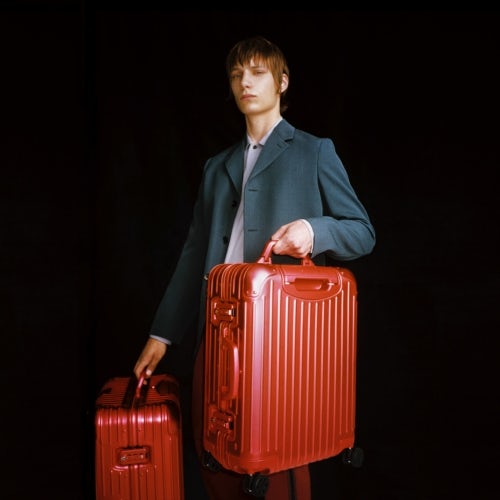 Today, the breakdown of the business has flipped: 80 percent of sales are made directly through the company’s stores, with 20 percent contributed by multi-brand retailers and a few remaining franchise agreements. There are just 500 points of sale, including 105 directly owned stores.

Despite the necessary sales drop, Arnault said the company was able to maintain profitability over the course of the reorganisation.

“The group can afford to have some unprofitable brands... but we’ve always felt that if we were profitable and cash-generating, we’d be free to make the decisions we want to make,” he said.

This year has marked a return to growth, with 2019 sales set to be “way higher” than the €440 million figure from 2015. (LVMH does not break out sales for individual brands, so Arnault could not share a specific number.) However, sales are set to double in the next “four-to-five years,” which would set up Rimowa to hit €1 billion in revenue in less than a decade of operating within the LVMH fold.

By no means would this make Rimowa the largest brand in the group, but it wouldn’t be the smallest either. Its rate of growth is outpacing that of most soft luxury labels, which can take more than a decade to achieve similar results, even with a hit handbag (or three).

Arnault was able to make the shift so quickly, in part, because of LVMH’s vast real estate portfolio, which allowed him to open up — and renovate — Rimowa stores at a steady clip. The label is also in the viable position of being underpenetrated in both the US and Asia, with zero presence in the Middle East prior to the acquisition. (Germany remains its largest market.) There’s digital opportunity, too. Online sales have grown from zilch to 10 percent of the business since 2015, and Arnault hopes to get that number to 20 percent.

But he also updated the product, changing the design of 100 percent of the offering and working with Rimowa’s vertically integrated factories in Germany, as well as suppliers of spare parts, to improve the quality of the goods. He also worked on improving lead times on popular styles, which were once up to a year-and-a-half in certain circumstances, by building a 50-person-plus team dedicated to supply-chain efficiency.

“We’re taking inspiration from the Apples and Teslas of the world, not the luxury brands,” he said. In part, that means reducing the number of products on offer, but increasing the number of colours and customisation possibilities in order to appeal to different audience segments.

We’re taking inspiration from the Apples and Teslas of the world, not the luxury brands.

To market Rimowa’s new look, Arnault did away with print advertising, making it the only LVMH-owned brand to devote all of its advertising spend to digital, noting that he prefers the transparent, data-driven analytics offered by online advertising.

According to LVMH Chief Digital Officer Ian Rogers, who works across the group, Arnault's success has come from his ability to balance the new with the old. "He’s not losing what’s great about the way LVMH does things," he said, citing Rimowa's ramped up retail network and refined distribution system. "He’s modernising very selectively. There’s a lot of subtlety to it."

But in order to maintain such momentum, Arnault plans to take Rimowa far beyond the baggage carousel.

“Ultimately, the dream is to sell the experience of not having a suitcase; that you go to Tokyo and your suitcase will be there, with everything you need inside. But this is a bit utopian,” he said. “Right now, the brand is only linked to the terrible parts of travelling: to the airport and from the airport. When it comes to the enjoyable parts, there is zero interaction. I want the customer to interact with the brand a bit more on a day-to-day basis.”

With Dior, Rimowa recently made its first foray into handbags, including clutch bags and backpacks for Kim Jones’ Spring/ Summer 2020 runway show. 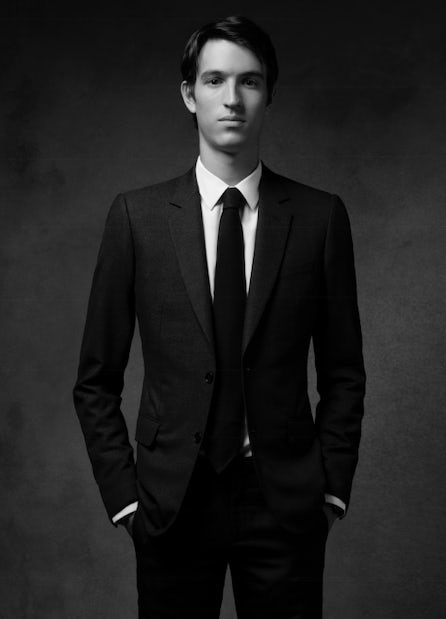 “In a way, it’s not farfetched. Louis Vuitton was also born in luggage to then move into handbags,” said Luca Solca, a luxury analyst at Sanford C. Bernstein Schweiz. “So why not Rimowa? I wonder how you can translate the hard-shell design DNA into handbags, though.”

Credibly moving Rimowa into handbags will be challenging. Prada and Louis Vuitton both successfully transitioned from luggage to fashionable accessories, but their material of choice was nylon and canvas, respectively. Hard metal and plastic, on the other hand, are less adaptable to the soft-goods model.

But Arnault is undeterred.

The third-born, 27-year-old son of LVMH Chairman and Chief Executive Bernard Arnault, Alexandre did not attend business school, instead earning a postgraduate degree in research innovation from the École Polytechnique, his father’s alma mater. Nonetheless, he talks in the vernacular of a Harvard MBA, trying to build a new kind of culture at Rimowa. The brand’s wood-panelled offices feel more start-up than luxury, complete with ping pong tables and stand-up desks, resulting in an upbeat, crackling energy that feels less reserved than elsewhere at LVMH.

“We’re trying to build a case study within the group,” Arnault said. “The main thing that is driving us is culture. We’re more American than European, and definitely not luxury [in that way].”

Rimowa is not the only experiment bubbling at LVMH. There’s Rihanna’s Fenty fashion play, as well as Guillaume Henry’s new Patou. But these projects are relatively small in comparison to Rimowa. And, critically, they don’t have an Arnault at the helm.