Should All Fashion Brands Be Selling Masks?

Brands and manufacturers have rushed to meet the demand for masks during the pandemic, creating a new, and uncertain, retail category in a matter of months.

Should All Fashion Brands Be Selling Masks?

Brands and manufacturers have rushed to meet the demand for masks during the pandemic, creating a new, and uncertain, retail category in a matter of months.

NEW YORK, United States — The pitch deck started circulating among investors in late April as the coronavirus pandemic spread across the US. The envisioned company, Halocline, positioned its target audience similar to many fashion brands: fashionable, upwardly mobile women aged 20-to-40 years old living in New York or Los Angeles.

The launch would include all of the usual touchstones, including influencer partnerships and events, along with limited-edition releases and capsule collections.

Halocline is not, however, an apparel label, but a medical-grade mask venture. The masks are Food and Drug Administration-compliant, a product its target consumer can “easily integrate into her wardrobe,” said founder Alexa Adams, best known as co-founder of lauded indie label Ohne Titel, which closed down in 2016.

When funded, Halocline will sell a pack of three disposable masks for $28, with a subscription option that offers drops of one-to-four packages per month. Like many other brands, it’s using a buy-one, donate-one model that benefits healthcare workers. Adams is still fundraising, but plans to begin producing masks in the fall.

She’s not the only one who sees an opportunity. An influx of labels and manufacturers are rushing to produce masks for healthcare workers and the general public alike. Comparing March to April, there has been a roughly 400 percent increase in new arrivals of face masks to mass-market retailers, according to retail analytics firm Edited. 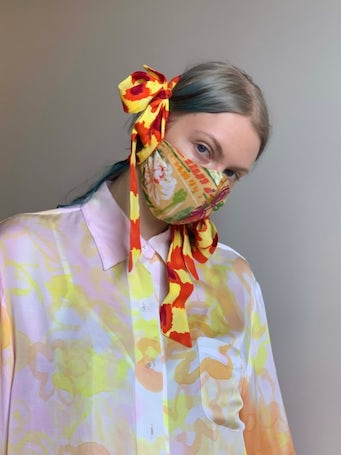 In April, total sales on the marketplace Etsy nearly doubled in part because of face mask sales, which reached roughly $133 million. On a call with investors, the platform noted that if they were a segment, face masks would be the second-largest category on the site in terms of sales.

“It was like waking up and discovering it was Cyber Monday, except everyone in the world just wanted one product, and that product was in extremely limited supply,” said Etsy Chief Executive Josh Silverman.

There’s interest at the high end of fashion, too. The hottest menswear product right now is Off-White’s $95 arrow face mask, which is currently sold out everywhere, according to global fashion search platform Lyst’s quarterly report.

Not Business as Usual

The use of face masks became widespread in certain parts of Asia following the SARS outbreak in 2003, worn every flu season and sometimes to protect against pollution. Consumers in western countries, however, have been reluctant to follow suit, stigmatising mask-wearing rather than seeing it as a collective sign of social responsibility or solidarity.

Even now, in the midst of the pandemic, both US President Donald Trump and Vice President Mike Pence have recently eschewed warnings from the healthcare officials to wear masks during public outings. But with new guidelines in place recommending mask-wearing in public and a Covid-19 vaccine still out of reach, masks may become an essential part of many western consumers' wardrobes, and subject to the same trends as other accessories like socks, underwear and handbags.

Some companies, like American Apparel-owner Gildan — which mostly makes blank T-shirts and other products that are made into event or brand merchandise— have announced that PPE production may become a long-term component of its business.

Many fashion brands that have made masks a part of their current offering have adopted the buy-one, give-one model and are priced reasonably. While there is risk of being called out for profiting from the pandemic, selling masks generally garners positive press, increases goodwill with customers and allows manufacturers to stay open. Some mask makers even receive aid from local and state governments for their efforts.

There’s a ton of opportunity out there if this becomes a real product.

To be sure, as consumers scale back on discretionary spending, masks have been a way for some brands to stay in business. Allyson Ferguson of Los Angeles-based brand Seeker has seen overall sales more than double in the month ended April 17 from a year earlier. Making masks has saved the company, and allowed her to continue paying rent, said Ferguson. “Had we not done this, I’m not sure to what degree the business would have continued,” she said.

For larger companies, masks are a new platform for branding anything from Disney characters to NBA sports teams, said Barbara Kahn, a marketing professor at Wharton. “There’s a ton of opportunity out there if this becomes a real product.”

Disney has already introduced reusable masks into its product offering, featuring Disney, Star Wars and Marvel characters in packs of four for $19.99. The conglomerate donated one million face masks to communities in need and promised to donate up to a $1 million in proceeds to MedShare, an organisation that collects and redistributes medical products to underserved communities.

Disney’s face mask website stated that “due to overwhelming demand,” the company has already reached its goal of $1 million in profits from mask sales, all of which were donated to MedShare.

Keeping up With Demand

Companies large and small have managed to quickly pivot their supply chains to produce masks, and see a long-term opportunity in continuing to do so.

But while the mask opportunity is clear, no one is sure exactly what the demand will be. (A prominent research firm has yet to publish global market size projections for 2021 and beyond.) What's more, ongoing execution won’t be so cut and dry.

For instance, the current demand may be keeping factories and fabric suppliers in business while clothing sales are down, but it could make it harder to get apparel produced once consumers start spending money again. Especially for smaller companies that don’t have as much control over their supply chain.

There can be too much of a good thing.

Brands must also be careful to avoid overreliance on a category where demand could swiftly change in the coming months and years, said Alexis DeSalva, a senior research analyst at Mintel. “As we get into 2021, it will really depend on how long it takes for things to kind of resume to normal and what that new normal looks like,” she said. “There can be too much of a good thing.”

What’s more, the competition is only going to increase. “Our competition is now anyone from 3M to Supreme and everyone in between,” said Alexander Hjertström, co-founder of mask brand Airinum, which recently collaborated with fashion label Marine Serre for its Fall 2020 collection. 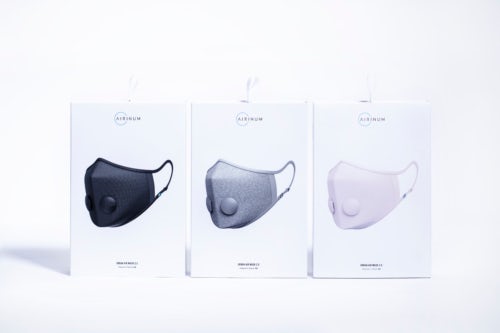 However, providing masks that consumers can feel comfortable wearing on a long subway commute, as opposed to a walk around the block, might be difficult.

“Anyone can design a mask, but how can you ensure credibility?” said Hjertström. Airinum’s in-house line of masks, priced at $75, come with a travel pouch, replaceable filters and customisable air valves and straps. The company currently has a waitlist and will start filling pre-orders soon.

There are signs consumers are willing to spend more money on fashionable masks, especially ones with extra accoutrements like filters. Serre’s masks, which retailed for over $200, sold out immediately. Off-White’s face masks, usually sold for anywhere between $50 and $100, were removed from luxury marketplace Farfetch after listings went over $1,000.

But they proved popular, and have helped drive purchases for other categories on the brand’s site. “Traffic has been insane, I mean I can’t really keep them in stock,” said designer Hillary Taymour.

Anyone can design a mask, but how can you ensure credibility?

The brand has planned more masks for upcoming seasons, and may offer exclusive colours to retailers in the future.

Designer Christian Siriano, who pivoted early to produce masks for healthcare workers in partnership with New York State, tweeted a photo of a pearl-encrusted face mask last month, asking followers if it “could be the future of protection and fashion.”

Segmentation has occurred out of necessity: athletic brands have used compression materials to make “performance” running masks; environmentally conscious designers have made their own from hemp fabric.

Similar to other products and categories, brands looking to position themselves long term within the market will need to differentiate themselves and provide a quality product.

“With any category, if it gets cluttered there will be a shakeout,” Kahn, the marketing professor, said. “Not everybody will win, that’s for sure.”

Fashion, E-Commerce and the Coronavirus

Where Should Fashion Brands Manufacture Now?