Unlike many of the brands it sits alongside at department stores including Bloomingdale’s and Bergdorf Goodman, Stuart Weitzman has enjoyed healthy — if not explosive — growth in a stagnating market. In its 2017 fiscal year, Stuart Weitzman generated $373.6 million in sales, up 8 percent from $344.7 million a year earlier, with a gross margin of 61 percent, up from 59 percent. Net sales in the first quarter of fiscal 2018, which included the holiday season, were $88 million, up 10 percent from the same quarter a year earlier.

Its success has been good for Tapestry, formerly known as Coach, Inc., which acquired the brand in 2015 for $574 million. And not only because it brought shoe-manufacturing expertise to a handbag-driven business, but also because the Coach and Kate Spade New York brands also under the Tapestry umbrella continue to see sales declines, partially due to a pull-back on promotions and discounts. Stuart Weitzman, on the other hand, continues to develop across channels, categories and regions.

And yet there’s opportunity for the brand to boost desirability and expand its retail footprint. With just 81 directly owned stores — 69 in the in the US, 12 abroad — it has room to grow. Especially in Asia, where accessible luxury is in high demand among the rapidly expanding middle classes. The challenge is effecting change without losing traction with loyalists.

“One of our commitments is to retain our existing customer,” says chief executive and brand president Wendy Kahn, who arrived in September 2016 from Valentino Fashion Group, where she led Valentino’s US business. In 2017, Kahn was joined by creative director Giovanni Morelli, an industry veteran who designed accessories at Prada, Chloé and most recently Loewe, where he played an integral role in the development of the Spanish house’s hit bags.

The move that has the most potential to truly transform Stuart Weitzman is the introduction of full-fledged handbag range.

Stuart Weitzman’s brand reputation is rooted in the perception that it is offering comfortable, designer-quality shoes for about half of what a designer brand would typically charge, which it is able to do, at least in part, because of its direct relationships with suppliers. (A pair of Stuart Weitzman heels, for instance, may cost $400 instead of the more typical $700 or $800.) Founder and former creative head Stuart Weitzman, who retired in the spring of 2017 after a 50-year run, had a knack for knowing what women want: his comfortable sky-high sandal, the Nudist, remains a best-seller and a celebrity favourite. However, the shoes can sometimes feel generic. Reliable, sure. Good looking? Absolutely. Distinctive? Perhaps not.

Kahn and Morelli — both veterans of the luxury industry, where perceived scarcity and exclusivity rule — want to take the brand’s core philosophy and give it a clearer visual point of view that feels as special and “designer” as higher-priced competitors. “We have to stand for something,” explains Kahn.

While Morelli’s imprint is noticeable in the Spring/Summer 2018 collection, Pre-Fall is his real debut, offering a glimpse into his intentions for the brand. A walk with the duo through a sprawling showroom at Hudson Yards — which features shelves upon shelves of rainbow jewel-encrusted slides, loafers latched with modernist hardware and leather lace-up booties with cleverly colour-blocked stacked heels — is revealing.

Morelli has built in aesthetic cues that he hopes will become Stuart Weitzman signatures, including a flat, squared-off stud. “It’s the beginning of a language,” he says. He has also tweaked the logo — it’s less squat now — and transitioned from the fusty purple packaging and footbed accents to what they’re calling “blue violet,” a cobalt-ish, energetic shade.

Gingerly updating the brand’s reliable, desirable, staples was another priority. For instance, this season’s version of the Nudist sandal has been modernised with a flared heel, while the classic stretch boot is not only rendered in more traditional microfiber but also in a springy patent leather with a textured, three-dimensional feel. 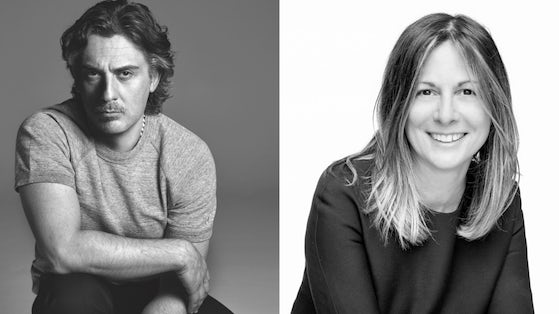 Of course, visuals go beyond the product: the Stuart Weitzman team will also need to find a new photographer for its campaign imagery. Last week, Kahn released a statement  confirming that the brand would stop working — at least “for the foreseeable future” — with Mario Testino, who was accused of sexual misconduct and abuse by several models and assistants in an explosive report published in The New York Times. (Kahn and Morelli declined to comment further on this matter.)

However, the move that has the most potential to truly transform Stuart Weitzman is the introduction of full-fledged handbag range, sold exclusively — at least at first — through its own retail stores. This is where the synergistic nature of a budding conglomerate like Tapestry comes into play. In 2015, Coach, Inc. purchased Stuart Weitzman for its expertise in design and manufacturing shoes, the fastest-growing segment of the personal luxury goods market. “I have a lot of confidence in footwear because of the role that it plays from above,” Tapestry chief executive Victor Luis recently told BoF. “That wonderful unique combination of fit and comfort combined with branding.” While the collection was spurred by client demand, “to be a shoe brand that starts to design handbags is not so easy,” Morelli says. He believes shoe brands trip up when making handbags because they tend to design coordinates (i.e. shoes and bags that match perfectly and are created almost simultaneously). Instead, he approached the project in the way a ready-to-wear brand would: while the shoes, bags and clothes on the runway might all work together, they don’t all necessarily go together.

Will the strategy work? “Handbags are a natural extension for Stuart Weitzman and should represent a great opportunity for add-on business,” says retail consultant Carol Spieckerman. “The key will be to follow the Weitzman playbook of celebrity exposure followed by a more democratised rollout of styles that go viral.”

The key will be to follow the Weitzman playbook of celebrity exposure followed by a more democratised rollout of styles that go viral.

The handbag market also simply looks quite different than it did a decade ago. “Consumers are just much more price-value oriented today,” says Robert Burke, chief executive of advisory firm Robert Burke Associates, citing the success of independently owned, well-priced accessories lines like Mansur Gavriel and Staud, which are well-priced but offer a similar cache as a more expensive style thanks to their unique design. “The market is changing. Traditionally, there were designer handbags and contemporary handbags. I don’t think it’s as separated of a world as it once was.”

From the start, they will aim to outfit the customer day to night, ranging from embellished clutches to chunky carryalls decorated with breezy, dangling strips of leather and other neat little details. For instance, the insides of some the bags have been embossed with “Stuartweitzman.com,” an irreverent nod to the growing importance of e-commerce.

But while Kahn calls the brand “channel agnostic” — Tapestry does not break down Stuart Weitzman’s performance by category or geographical region — brick-and-mortar retail still marks a major opportunity for the label, especially in areas of the world (like China) where it currently operates through licensing deals and wholesale partners.

Right now, Morelli is tweaking store formats and furnishings, creating individualised spaces defined by a stable of materials — from plush champagne-coloured carpet to blue violet stone — that he will refer back to with each refresh. His first remake, the redesign of the Rodeo Drive flagship in Beverly Hills, debuted on Friday evening, just in time for awards season. After all, one thing that won’t be changing about Stuart Weitzman is its consistent presence on the red carpet, where the Nudist sandal continues to dominate thanks to its clean line and pain-free fit.

What Morelli and Kahn seem to want more than anything is for Stuart Weitzman to be seen as valuable not only for price and ease of wear, but also for its aesthetic. “It’s about the quality and the detail,” Kahn says. “And oh, the price isn’t offensive? That’s great.”