How are luxury megabrands Louis Vuitton, Gucci and Prada evolving their strategies in the all-important women’s handbag war?

How are luxury megabrands Louis Vuitton, Gucci and Prada evolving their strategies in the all-important women’s handbag war?

LONDON, United Kingdom — It is a truism that handbags are the foundation of many of the world’s top luxury businesses. Leather goods (70 to 90 percent of which are handbags) is by far the single largest product category — and thus the ultimate battlefield — in the personal luxury sector, accounting for up to 90 percent of total revenues at some brands.

The reasons are manifold. For consumers, handbags are powerful status symbols that can be easily mixed and matched with other items to suit a wide range of occasions over a product lifespan that’s often measured in months, if not years, resulting in much lower “cost per wear” than shoes or ready-to-wear. For chief executives, handbags are also uniquely profitable, offering higher sales densities and stronger full-price sell-through than other items. 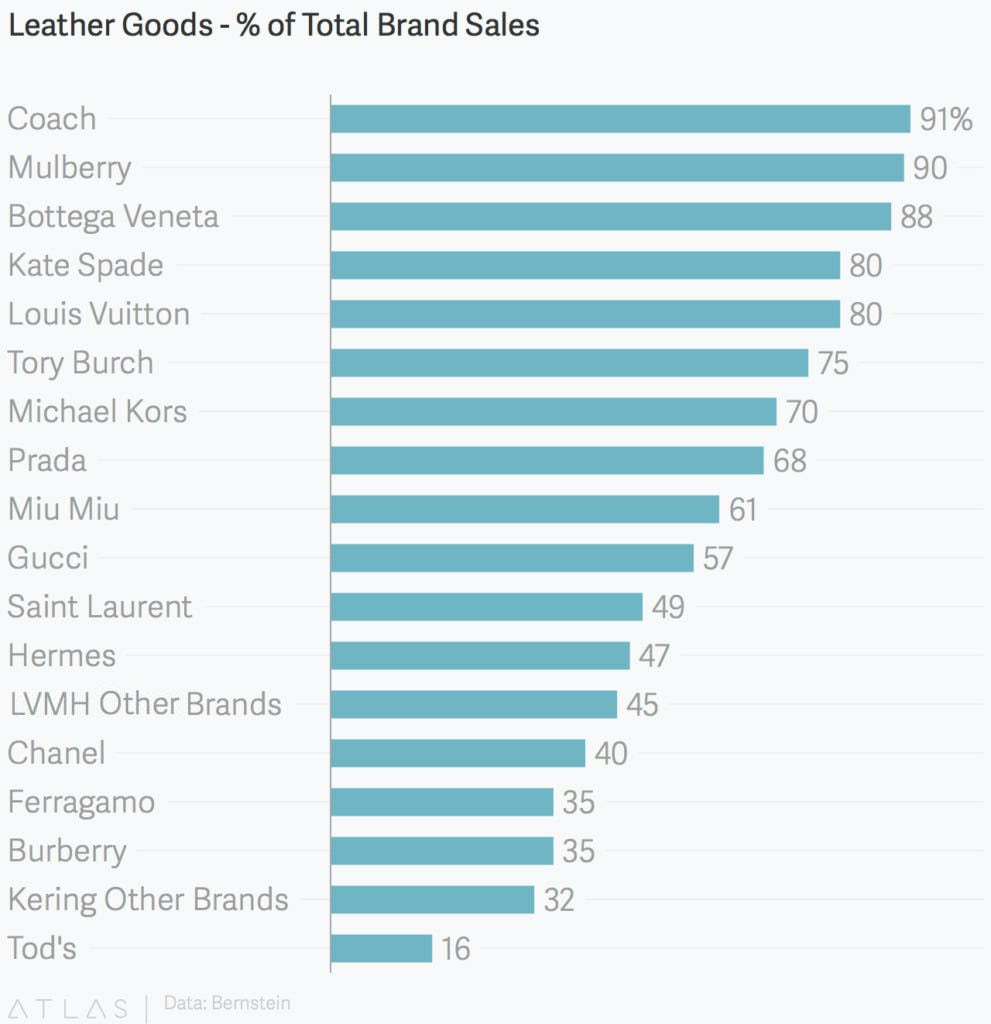 But this makes the category extremely competitive, dominated by global players who have quite literally mastered the art and science of selling handbags. For Louis Vuitton, where bags drive for 75 percent of revenues, Prada (45 percent) and Gucci (40 percent), the right handbag strategy is critical. A new report by Mario Ortelli, a senior analyst at Stanford C. Bernstein, does the analysis. 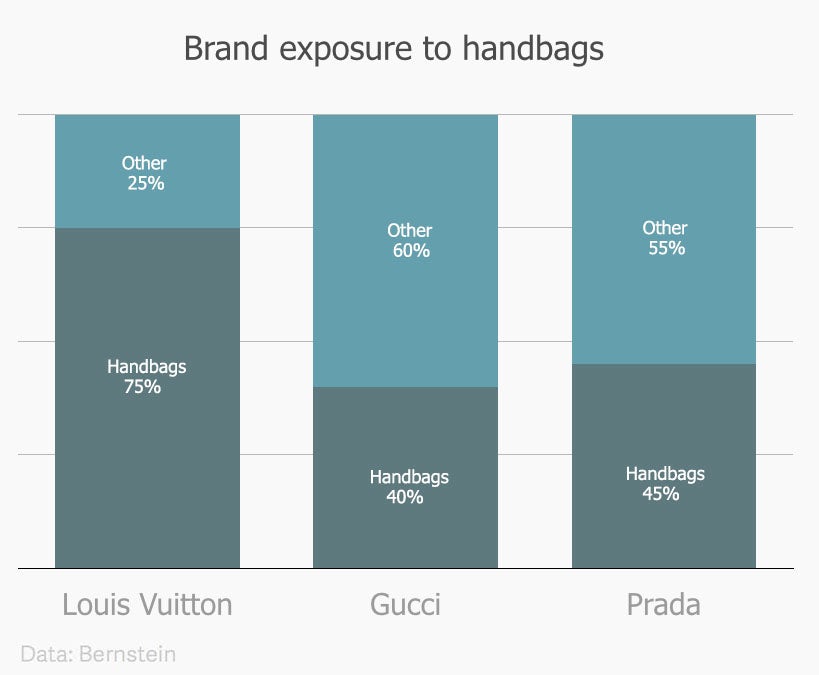 The importance of handbags to Louis Vuitton, Gucci and Prada

At Louis Vuitton, Nicolas Ghesquière’s predecessor, Marc Jacobs, was skilled at creating buzz around his collections. But during Jacobs' tenure, the label relied on sales of iconic monogram bags at the lower end of the price spectrum to drive sales, while sustaining brand positioning with a few highly priced items, explains Ortelli. Since his debut in 2014, Ghesquière breathed new life into the house's handbag offering, introducing several higher-priced seasonal styles that have since become new classics.

The Petite Malle (French for “little trunks”), which was unveiled for Autumn/Winter 2014 at Paris Fashion Week, was the most coveted it-bag of the season and later became a core shape for Louis Vuitton, taking its place alongside lower-priced models like the Speedy. A new version of the Petite Malle for men debuted at Kim Jones' last runway show for the French mega-brand in January. 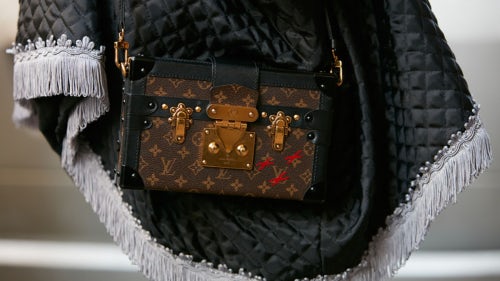 “One [remarkable] thing about Vuitton is its ability to take seasonal bags after a few years and re-launch them, as they have recently done with the Manhattan,” reports Ortelli. Another example is the “Capucine,” which was re-launched in 2013 and sold out instantly in stores across London, Milan and Paris. “We can now say that it has become one of the core handbag shapes of Vuitton.”

In the past eight months, Louis Vuitton has also launched new styles within the price range of 1,500 to 2,000 euros. Over the same period, the brand has also expanded the breadth its of existing models, by offering styles in different colours and materials or adorned with appliqués and embroideries. Looking ahead, “we’ll still see the launch of new shapes at Vuitton, but this will be at a more normal pace [around two to three product launches per season] compared to the accelerated pace during the second half of 2016 to the first half of 2017, when about four new shapes were introduced every season,” says Ortelli.

The analyst believes Vuitton would do well to offer more seasonal or limited-edition handbag styles, while simultaneously revisiting the brand's archive and relaunching seasonal bags, which could ultimately become evergreen like the Petite Malle.

Since the appointment of Alessandro Michele in 2015 as creative director, Gucci has been trying to capitalise on its new momentum and revive handbag sales by relaunching heritage products as well as introducing new models. “Gucci has traditionally had a strong footprint in leather goods, ready-to-wear and shoes, whereas in comparison, Vuitton began as a leather-goods brand and only recently launched ready-to-wear and shoes,” explains Ortelli. 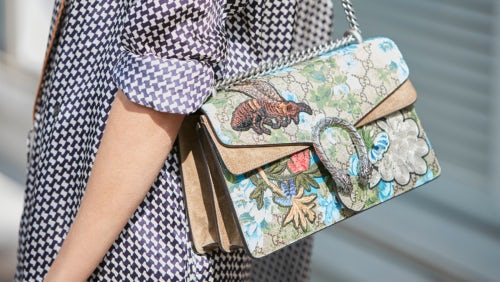 “With the creative direction of Michele, Gucci has become something classic,” he continues. “Think of the Dionysus or the Sylvie — [Michele] has expanded the brand’s offer of 1,500 to 3,000 euro handbags, and has also launched a few selected models, like the Gucci Totem, at a higher price point for more sophisticated clients.”

Indeed, with its brand and sales momentum still at full speed, Gucci has introduced new lines over the past eight months in two price brackets: one starting at a price range of 1,500 to 2,000 euros and a second between 2,500 to 3,500 euros. While continuing to build on the success of the Dionysus, the brand launched new designs in 2017 such as the Ophidia and Ottilia. “Gucci is looking to satisfy the buoyant market demand by launching products at a mid- and high-price bracket. This could significantly drive growth for Gucci in 2018,” explains Ortelli.

Of the three brands, Prada has the most limited price range in the handbags category. In the past, the house's handbags have been higher priced relative to its peers. The mini Prada Galleria, for example, is priced at 1,100 euros, while a small Louis Vuitton Speedy costs 650 euros and a small Gucci shoulder bag is available at about 690 euros.

Over the past eight months, Prada further reduced the price range of its new models, dipping to a range of 750 to 2,000 euros. “The expansion of lower price points can support Prada sales in the short term, with an increase in volume sold,” says Ortelli. However, he notes that Prada's current bags architecture is not as strong as that of Vuitton or Gucci, and there has been no new handbag style at its core price point of 1,500 to 2,000 which can replicate the success of the Galleria bag. “If you look at the other two brands, their price range is quite wide,” he says. 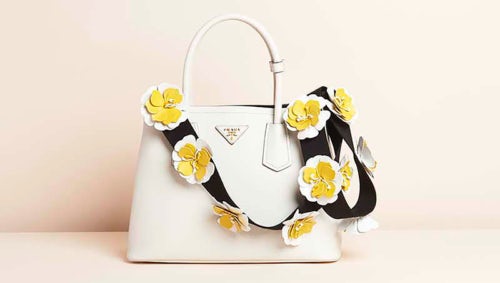 In September, Prada reported first-half profit that missed analysts’ estimates. The Milan-based house also embarked on a wave of store closures in 2016, as profit fell to its lowest level since its 2011 initial public offering. To get back on track, it has been counting on handbags. “We believe that Prada will continue to launch new and distinctive designs in the upcoming years, trying to find some new evergreen products in this important product category,” says Ortelli.

He advises that focusing on lower price points while simultaneously introducing new highly priced products, such as its velvet bags priced between 1,400 to 3,500 euros, will help improve Prada's sales in 2018. “Prada is in the challenging position of needing to defend and possibly gain market share from Louis Vuitton and Gucci, the two biggest brands in the handbags market, which have great momentum.”

Beyond the ‘It’ Bag