Ahead of its TommyNow show in Shanghai, the brand shares its big plans for Asia. Standing in its way are a crowded marketplace, fickle consumers and the potential fallout from a trade war.

Ahead of its TommyNow show in Shanghai, the brand shares its big plans for Asia. Standing in its way are a crowded marketplace, fickle consumers and the potential fallout from a trade war.

SHANGHAI, China — Asia is now at the centre of Tommy Hilfiger’s global growth strategy, signalling a new era for the all-American brand. It has been a long time coming but executives hope to close the distance between the brand’s more aggressive competitors by focusing on Asia’s largest economy in a three-pronged attack.

“If you see the Asian market in general, how it is growing and the potential we see in that market, we clearly want to focus on China. Generally, in Asia, but especially China,” says Tommy Hilfiger chief executive Daniel Grieder.

Shanghai is up next on September 4 as the TommyNow see-now-buy-now juggernaut rolls east after pit stops in New York, Los Angeles, London and Milan. In conjunction with the show, Tommy Hilfiger executives revealed to BoF the brand’s first Chinese celebrity womenswear ambassador, actress Maggie Jiang, known in China as Jiang Shuying.

“I think Chinese and global consumers will be excited to see what we’ve put together for the runway event this year,” Jiang tells BoF. “Creatively… it’s been a really wonderful partnership to work with Tommy this season — particularly with his show coming to Shanghai for the first time.”

Also on the agenda is a new partnership with Alibaba’s Tmall platform, first hatched by Tommy Hilfiger, Daniel Grieder and Alibaba founder and executive chairman Jack Ma in Ma’s office a year ago.

Tmall will feature a livestream and see-now-buy-now sale of every look featured in Shanghai’s TommyNow show, including the first capsule collection collaboration with global celebrity menswear ambassador Lewis Hamilton as part of Tmall’s “Super Brand Day” promotion, also being held on September 4.

“Celebrating Super Brand Day on the day of the show is going to be historical, a milestone for the brand, but also for the Chinese consumer, Tmall and everyone involved,” Tommy Hilfiger says, adding that the brand’s commitment to the see-now-buy-now concept, even as other early proponents have fallen to the wayside, reflects a commitment to consumer desires.

The consumer told us very clearly that he and she wanted immediate gratification.

“The consumer told us very clearly that he and she wanted immediate gratification, and as a democratic, inclusive brand, we thought it was the perfect opportunity to do see-now-buy-now well,” he says.

Though Tommy Hilfiger doesn't release sales data directly correlated to TommyNow events, according to engagement metrics the brand has released, social media impressions across Instagram, Facebook, and Twitter hit 2.6 billion in 2017, up 100 percent from the previous year and on the day of the last TommyNow show in Milan, more than 65 percent of visitors to the Tommy.com website were first-time visitors.

“In particular, we continue to be very pleased with the growth trajectory of our Tommy China business... we are becoming more visible in the market together with our local activations we are seeing brand awareness and the desire to purchase continue to improve,” Manny Chirico, chairman and chief executive of PVH Corp., said on a call with analysts following the earnings announcement.

According to the brand, Asia contributed 9 percent of Tommy Hilfiger’s total revenues of $3.9 billion in 2017, with the China business worth about $200 million. From a little over 100 stores in 2011, Tommy Hilfiger expects to have 429 stores across China by the end of this year.

“So the growth is very momentous and powerful. We really believe that ultimately, becoming a dominant premium brand in the Chinese market is our goal,” Hilfiger says.

Mario Ortelli, managing partner at Ortelli & Co., sees potential for Tommy Hilfiger to achieve its lofty goals in China, but only if it can overcome some pretty significant hurdles along the way.

“The first one is that the Asian consumer has been shown in the past to be the fastest in adopting and also [fastest in] changing brand preferences. So, you have to become relevant and stay relevant for them,” Ortelli says.

“The other risk I potentially see is the competition. You should strive to be one of the most relevant brands in your segment, providing newness and [executing] perfectly on the marketing aspects of your offer: digital, communication, pricing, retail experience. If your competitors make a better execution, it’s harder to win market share.” 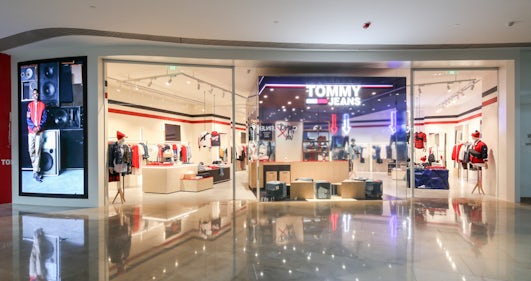 As of July 2018, Tommy Hilfiger boasted 1,386 points of sale in the Asia region across 13 countries, and as Hilfiger mentions, the brand has been on a retail store opening spree of late, opening 382 stores in China, 134 in India and Japan (combined), and 10 stores in Korea in 2017 alone.

Far from feeling they are moving towards brick and mortar capacity, Grieder believes they need to continue this run of openings. “We see clearly that we need to open more stores. We hope to, and I think need to, double [our stores] and the potential is there really to double the business over the next five years in China,” he says.

According to Michael Zakkour, vice president for China, APAC and global e-commerce practices at Tompkins International, the explosion of China’s middle class and increasing spending power of brand-hungry young consumers means there is more room for growth in the premium lifestyle category, occupied by brands such as Tommy Hilfiger, Calvin Klein, Michael Kors and Tory Burch, than there ever has been.

“Luxury and affordable luxury demand is booming in China as the Post-’80s and ’90s generations and Generation-Z consumers are now richer, more numerous and more confident about their sense of fashion and the desire to discover and experiment with a multitude of brands. PVH is in great position to serve these consumers with Tommy Hilfiger and Calvin Klein,” Zakkour says.

Though Tommy Hilfiger has been present in the China market since 2002 and other major up-and-coming regional markets for almost as long (they have been in India since 2004), the brand initially came to China through a licencing arrangement, then entered into a joint venture, TH Asia, in 2010. Parent company PVH Corp’s decision to buy back the whole of the Tommy Hilfiger’s China business in 2016 has been the real driver for accelerating growth in the country.

“When we operate a business directly we can grow faster, but we can also offer a larger assortment, we can invest more in marketing in events. We just have the business more tightly under control,” Grieder points out.

“That’s why we’ve done it, because we know China is going to be one of the biggest markets in the future.”

As well as opening doors, the brand is driving growth in China through an omnichannel strategy that started with Tommy.com and has since expanded to include partnerships with China’s major e-commerce platforms, Tmall, as well as competitor JD.com.

According to Hilfiger, though they are confident with their marketing, communications, digital and retail strategies, for their brand, and for consumers, product remains the most important piece of the puzzle.

“We are very well aware of the fact that you can have all the omnichannel pieces in place but if you don’t have the right product and experience, then you really have nothing. You really need all cylinders firing at all times,” Hilfiger says.

Another potential hurdle is the ongoing trade conflict between China and the US. Though Tommy Hilfiger manufactures a large, but undisclosed percentage of its products in Asia, Grieder says a much smaller percentage currently comes from China and that which does isn’t necessarily destined for the American marketplace, insulating the brand from potential tariff troubles.

The Asian consumer has been shown in the past to be the fastest in adopting and also [fastest in] changing brand preferences.

However, consumer sentiment is another matter. If a trade war between China and the US drags on and becomes increasingly ugly, some believe there is a chance that American brands, and particularly inescapably iconic American brands such as Tommy Hilfiger, could suffer some blowback.

“So far anti-American sentiment as it relates to purchasing consumer products has been limited for the most part. If the trade war continues to worsen it is possible that the Chinese government will subtly discourage consumer purchases of American branded products like they have done in the past with South Korea and Japan, but so far that has not happened,” China Market Research Group principal Benjamin Cavender says.

In the meantime, it’s not something Tommy Hilfiger is losing sleep over.

“[Chinese consumers] are smart enough to know that we are not politically involved or enhanced by what is going on from a political standpoint. Ultimately, they’re going to judge the brand from the experience and the product,” Hilfiger says.

The signing of Tommy Hilfiger’s first Chinese celebrity ambassador in Shawn Yue 12 months ago proved another important step in engaging the local menswear market. Tommy Hilfiger claims brand awareness increased from 46 percent to 59 percent since Hong Kong-born actor Yue came on board, with an overall sell-through of key campaign looks up 50 percent in the first four weeks of the spring 2018 season.

Having proven the value of localising their celebrity ambassador offerings through the partnership with Yue, the brand is not only expanding the practice to include actress Maggie Jiang, but also looking at exporting the idea to other markets, particularly throughout Asia, where local stars have incredible influence.

“In India, when you take a local ambassador there the interest goes much higher and faster. I think this will be the way going forward, to use local ambassadors. That doesn’t mean we can’t use [global ambassador] Lewis Hamilton, but combining that with a local ambassador is the best way and now we are going to do the same with Maggie in womenswear,” Grieder says.

“As a brand, we are going to look at what we have learned in China and, especially in Asia, I think [lessons from China] will play a very big role.”

Tommy Hilfiger’s Bet on Instant Gratification Is Paying Off