Gojek is ingrained in the consumer psyche across Southeast Asia. With recent investment from Facebook the ‘super-app’ is now valued at $10 billion and poised to boost e-commerce in the region.

Gojek is ingrained in the consumer psyche across Southeast Asia. With recent investment from Facebook the ‘super-app’ is now valued at $10 billion and poised to boost e-commerce in the region.

JAKARTA, Indonesia — “Gojek has become the service provider of anything and everything that you need in your life, except e-commerce,” said Svida Alisjahbana, a Jakarta-based media mogul who might now have to reconsider her caveat.

E-commerce may have been the mobile app’s Achilles heel for quite some time, but now that Facebook and PayPal have come on board as investors, experts believe Gojek could enhance the shopping experience. Fashion e-commerce giants like Zalora are already collaborating with the app’s fintech arm.

Gojek was ubiquitous across Southeast Asia long before this month’s investment announcement. In markets like Indonesia, the region’s colossal growth engine, the mobile app has become an essential part of daily life for a significant proportion of the region’s population.

Founded in 2010 by Nadiem Makarim, Gojek now has over 170 million users across five countries in Southeast Asia: Indonesia, Vietnam, Singapore, Thailand, and the Philippines.

Gojek's data is super valuable [because] it knows the daily ritual and rhythms of a person.

“Residents practically use it for everything — transport, food, and [all kinds of] services [even] house cleaning,” said Guan Tan, a Singapore-based fashion journalist who makes special note of the app’s payment platform. “GoPay is huge [for shopping] as well. In Jakarta, most residents don't even carry cash around anymore.”

With investment from Facebook estimated to be in the hundred millions of dollars according to a report in the Financial Times, Gojek’s total valuation now exceeds $10 billion, and the company’s role is only going to expand.

“I see it as the beginning of tremendous growth for their business,” said Shannon Hartono, vice president of Indonesian luxury retailer Time International, which operates boutiques for brands including Chanel, Cartier and Chopard among others.

“Imagine them having access to PayPal's network of merchants and Facebook’s users. It opens so many doors for them,” she added.

Market experts contend that, if fashion brands and e-tailers can somehow harness Gojek’s consumer data, it would be a potential gold mine.

“Gojek knows the daily ritual and rhythms of a person — where they live and work, when they go out and come home, how often they visit the mall, gym, restaurants, and so on,” said Singapore-based Lee Fordham, founder of data science consultancy Synthesis. “From the places they visit you can also infer their propensity to pay.”

“Gojek's data is super valuable because its penetration in Southeast Asian markets and rural communities is good,” he continued. “It's very hard to get reliable behavioural data for these audiences, and brands are interested in understanding and tracking changing preferences and priorities among what will become their next cohort of affluent consumers.”

Gojek is best known for its army of over 2 million scooter drivers, but the company’s potential far exceeds its success in the ride hailing market. Gojek is shaping Southeast Asia’s booming digital economy.

The region’s importance to the fashion industry cannot be overstated. In 2019, the Southeast Asian fashion market grew nearly twice as fast as the global average, according to The State of Fashion, a joint report by BoF and McKinsey. Industry leaders are often surprised to learn that Indonesia’s fashion market alone is already significantly larger than that of Saudi Arabia or the United Arab Emirates. 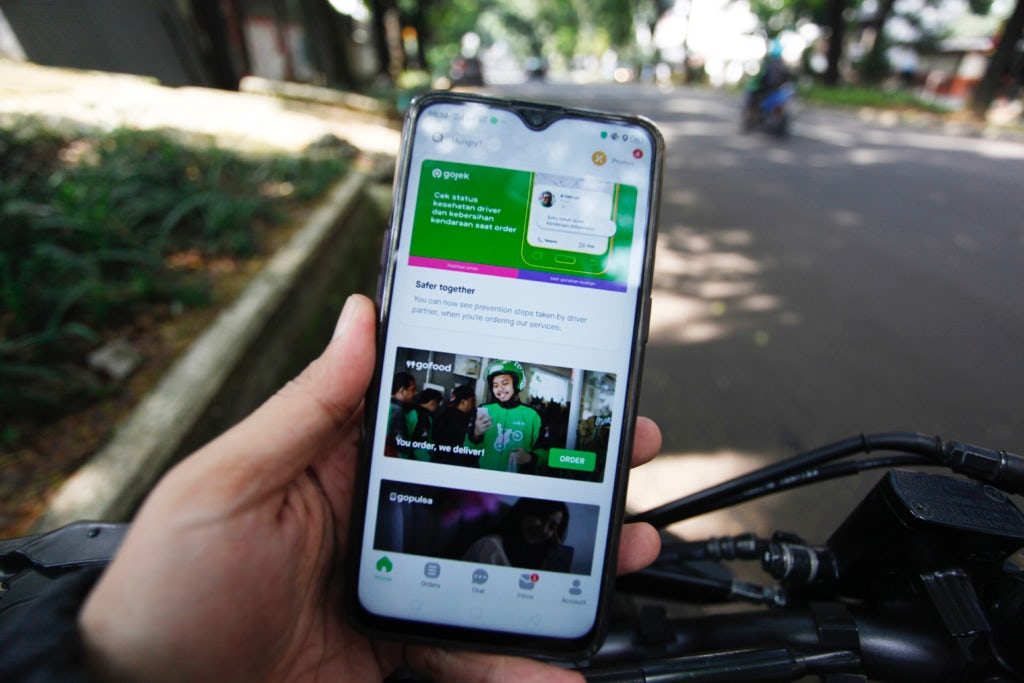 According to data provided by Fitch Solutions before the pandemic, spending on clothing and footwear in Southeast Asia was set to grow at an impressive rate. By next year, it was predicted that consumers in 8 of the 11 biggest national markets in the region would spend more than $68 billion on fashion. Due to the economic impact of the pandemic, it is unlikely that this forecast will be achieved but the long-term prospects for the region remain good.

In Indonesia, Gojek is a super-app, analogous to WeChat in China or Line in Japan. Altogether, it offers over 20 different services, ranging from deliveries to remote medical consultations.

Gojek’s GoPay, the leading digital wallet in Indonesia according to a 2020 report by market research company Ipsos, facilitates easy payment for these services, but it is also an important asset in its own right.

For Global Fashion Group, an online retailer focused on high-growth emerging markets, accepting payments from digital wallets including GoPay is a key strategy.

“Credit card penetration is low in many of our markets, so our payment tools reflect the local customer’s payment preferences to ensure this is never a friction point for shopping online with us,” said Patrick Schmidt, co-chief executive of Global Fashion Group, whose e-commerce platform Zalora receives over 50 million visits a month and has over 2 million active customers.

“In Indonesia, we work with Gojek via GoPay as one of the many payment options our shoppers can use to buy their favourite brands on Zalora,” he said. “We have also worked with Gojek on a few marketing campaigns to promote the use of GoPay on Zalora.”

Zalora sells scores of fashion and luxury brands across a spectrum of price points, with handbags ranging from Mango to Prada and stilettos from Missguided to Balenciaga.

While Gojek may be indispensable to some consumers buying brands indirectly via platforms like Zalora, it is not yet a provider that many luxury brands have invested in for direct payments.

“Of the 60 brands we currently represent for Indonesia, only one brand accepts Gojek's GoPay [directly] as a form of payment,” claimed Hartono of Time International.

Charges retailers pay to use GoPay are relatively high compared to other banks and services such as Ovo, backed by regional ride-sharing rival Grab, she explained, and while Gojek’s delivery service GoSend is popular with fashion brands, luxury brands are sometimes reticent to use it because parcel insurance tops out at just 10 million Indonesian rupiah (about $700).

Indonesia’s fashion market alone is already significantly larger than that of Saudi Arabia or the United Arab Emirates.

Zalora also works with Gojek’s rival Grab as a payment option in Singapore, Malaysia and the Philippines and has collaborated with Grab on several marketing campaigns.

Both Gojek and Grab have recently laid off hundreds of employees as they begin cutting some of their non-core services and businesses due to the financial impact of the pandemic.

Eli Manasseh “Nash” Benjamin, chief executive of FJ Benjamin Group, a company that distributes fashion brands such as Celine, Gap, Givenchy, and Marc Jacobs in Southeast Asia, says he would be willing to consider Gojek’s services contingent on their reliability and the rates they charge.

Crucially, Hartono added, “there are limitations on the value one can have in their GoPay account, so that restricts usage.”

Despite these limitations, Gojek does have a shopping service, GoMall, which was created in collaboration with JD.id, the Indonesian outpost of Chinese e-commerce behemoth JD.com, but it is a minor player compared to market leaders in the region like Zalora, Tokopedia, Shopee, Lazada, and Bukalapak.

“In the beginning of e-commerce, trust in sellers was low,” explained Alisjahbana, chief executive of Indonesia’s Global Creative Media Group and chair of Jakarta Fashion Week. “Gojek had a key advantage to get the courier to bring the clothes, to return them if they don’t like it, and to process the payment. In the meantime e-commerce in Indonesia has become similar to e-commerce around the [rest of the] world.”

While fashion industry leaders like Alisjahbana remain somewhat sceptical about its future role in Indonesian e-commerce, others believe that Gojek could yet become a major player when regulations limiting digital wallet caps are revised.

Integration with PayPal, which invested in Gojek alongside Facebook, will help mitigate some of GoPay’s limitations.

“PayPal’s payment capabilities will be integrated into Gojek’s services,” confirmed a spokesperson for PayPal. “Customers of GoPay… will be able to shop and pay seamlessly at PayPal’s more than 25 million merchants around the world,” they said.

Partnership with PayPal should help Gojek with its ambition to be a bigger player in payments across Southeast Asia. While GoPay is extremely popular in Indonesia, it isn’t as dominant in other markets in the region — though to some extent, it doesn’t have to be. Grab, Gojek’s biggest rival, was founded in Malaysia and is now headquartered in Singapore, but 224 of the 339 cities it operates in across eight countries, are in Indonesia, the key battleground.

Collaborations [with Gojek] could potentially extend to fashion and beauty brands selling on Facebook’s social platforms.

“There’s a race among digital platforms to become the real bank for people in Indonesia,” said Alisjahbana. Digital payments in Southeast Asia are expected to account for almost half of all spending in the region by 2025 according to a report by Google and Bain & Company

Currently around 70 percent of adults in Southeast Asia are either unbanked or underbanked, according to the Google report, and 60 percent of payments are still made in cash, compared to just 16 percent in the US and the UK.

With hundreds of thousands of merchants already signed up, GoPay is currently the favourite to win that race, and some now believe that handling payments for Facebook would only put it further ahead as the US company begins to push commerce more aggressively on its social platforms.

“We have launched a partnership with Instagram that enables Instagram food merchants to deliver food to consumers using Gojek,” said a spokesperson for Gojek, adding that the company will continue to explore ways to work with Facebook to further enable small and medium-sized merchants on Facebook and Instagram to make greater use of its services.

Such new collaborations could potentially extend to fashion and beauty brands selling on Facebook’s social platforms.

Facebook’s properties are already highly valued among marketers in Southeast Asia, suggesting real potential for such services to take off in the region.

In a blog post, Matt Idema, chief operating officer of WhatsApp, said Facebook will work with “indispensable” Gojek to “bring millions of small businesses and the customers they serve into the largest digital economy in Southeast Asia.”

“When global companies want to come into Indonesia and access the potential of the market, it’s not like you can do some big enterprise deal,” he recently told CNBC. “Our market is comprised fundamentally of small and medium-sized businesses.”

While Facebook’s goals for the Gojek investment are to help drive financial inclusion among unbanked small businesses, big brands also stand to benefit — if they take advantage of seamless in-app payments.

But focusing on just medium and small enterprises downplays Facebook’s evident ambition to become a major e-commerce player in the region, and for GoPay to usurp cash as the dominant payment mechanism, first in Indonesia, and then, with the help of PayPal, across the wider region.

Ultimately it is this ambition that makes the Asian super-app a powerful tool for global fashion brands looking to expand in the region.

The ‘Made in Indonesia’ Opportunity

As Competition Heats Up, Indonesians Are Spoiled for Choice

JD and Lazada Square Off in Indonesia, Asia's Next E-Commerce Prize