LONDON, United Kingdom — As retailers geared up for Black Friday and Christmas amid a slowdown in UK consumer spending, Selfridges reported record profits for the year ending January 2017.

The department store chain, a pillar of the Selfridges Group, which also includes Canada’s Holt Renfrew and de Bijenkorf in The Netherlands, said operating profits for the period were £180 million ($236 million), up 18 percent from £152 million ($200 million) the previous year, while sales reached £1.6 billion ($2.1 billion), a 16 percent increase from £1.4 billion ($1.8 billion).

“Selfridges has delivered excellent results… achieved by the success of our long-term planning and implementation of an ambitious programme of capital expenditures across all channels and stores,” Paul Kelly, managing director of the Selfridges Group, said in a statement.

He was referring to a £300 million ($393.8 million) investment announced in 2014, which has served as a catalyst for the transformation of its flagship London store. The retailer unveiled a new 20,000 square foot Designer Studio, devised to showcase established and emerging fashion designers, in July, three months after it launched a new 37,000 square foot Body Studio, housing lingerie, swimwear, pajamas and high-performance sports gear. 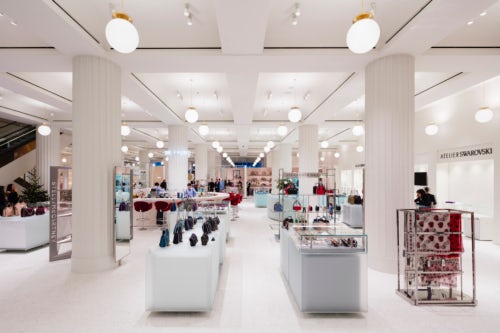 The accessories hall at Selfridges in London | Source: Courtesy

The focus now is on revamping the store's accessories department — the second phase is set to be unveiled next month, just in time for peak Christmas trading. When the changes are completed in 2018, the British retailer says it will be the largest destination for luxury accessories in the world.

Selfridges’ enviable productivity flies in the face of the financial headwinds facing the department store segment, particularly across the Atlantic, where American retailers have struggled to capture consumers as spending habits shift. Shoppers are increasingly ordering on phones, computers and tablets, with e-commerce giants like Amazon siphoning sales from physical stores. Many have also redirected their spending from physical products to experiences.

According to Springboard, a retail intelligence firm, the capture rate of footfall for UK department stores declined 5.8 percent between 2016 and 2017, over the period from January to August, more than any other type of store. “This indicates that the market share of department stores is declining,” says the company’s marketing and insights director, Diane Wehrle.

“[Selfridges'] level of investment, innovation, style authority and brand curation across its stores and online exemplifies how to stand out in a crowded market,” says Honor Strachan, principal retail analyst at GlobalData. “Retailers must identify which in-store services and experience-led departments will draw in customers and increase dwell time to benefit their future financial performance.”

So, what are the specific secrets to Selfridges’ strong performance — and what can other retailers learn from its strategy?

Unlike US department stores, many with multiple outposts — Macy’s has 855 locations, Neiman Marcus has 42 and Bloomingdale’s has 38 — Selfridges is able to focus its energy on four physical stores across three cities: London, Birmingham and Manchester. While the US is a much larger country — with more than 323 million people in 2016, compared to 66 million in the UK — spread over a much larger swath of land, retailers must continue to shrink their square footage, focusing on densely populated urban centres.

Consider the approach of retail-real estate developer Westfield, which has abandoned its underperforming suburban locations. “Ten years ago, Westfield had 69 shopping centres in the United States; today we have 33 and two in the UK. We probably will have quite a bit less over the coming years,” Westfield co-chief executive Steven Lowy told BoF in an October 2017 interview. “We’re not far away from that right now, and the way we do that is by selling non-core assets and reinvesting that capital in assets like London, Milan, New York, Silicon Valley, etcetera.”

Within its stores, Selfridges has embraced a concession model, which allows brands to run their own shop-in-shops, taking responsibility for customer experience and sales performance. “Often, concessions highly outperform the traditional wholesale model, because the brands help to manage and control stock and personnel, so they have a singular eye on the business,” says Robert Burke, chief executive of retail consultancy firm Robert Burke Associates. 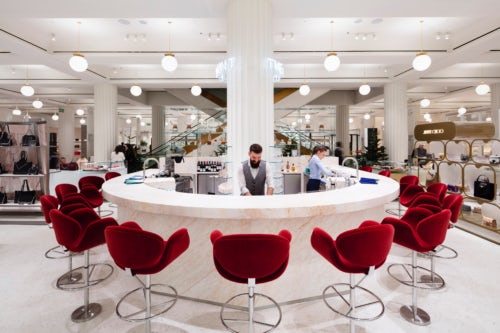 The accessories hall at Selfridges in London | Source: Courtesy

“In Selfridges, particularly the high-end brands, the people working within those concessions are very well trained and knowledgeable about the product they offer,” says Springboard’s Wehrle. “You’re going there for a true quality retail experience — you’re not just going there to buy products.”

While the shop-in-shop approach is commonplace in Europe and Asia — Paris’ Le Bon Marché is another widely admired example — it’s less popular in the US. However, retailers including Saks Fifth Avenue have begun to employ it more regularly.

The key to making it work is in the execution. "The experience should be seamless,” Burke advises. “When a customer walks into the store, it should have everything they want and there should be great customer service. How the business is structured should be unknown to them.”

“The customer is always right” and “give the lady what she wants” are terms originally coined in 1909 by Harry Gordon Selfridge, the founder of the department store. So it’s no surprise, then, that Selfridges has long prided itself on offering a diverse curation of products and experiences where there is something for everyone.

For instance, on the third floor of the London flagship, known as the Designer Studios, streetwear-inspired brands — including Yeezy, Vetements, Off-White and Heron Preston — sit alongside emerging labels Grace Wales Bonner, Art School and Marine Serre and high-street favourites Topshop and Whistles. Established luxury brands including Céline, Saint Laurent, Valentino and Oscar de la Renta can be found in the Designer Galleries, just one floor down.

But while many retailers offer a high-low mix, Selfridges prides itself on getting that mix just right. “Selfridges’ point of view is extremely clear,” Burke says. “The consumer can go to individual stores, but they’re coming to department stores to see a point of view and to find an edit of products in a specific way.”

In a market where consumers have more and more tools to purchase goods at the cheapest possible price and the greatest possible convenience, the pressure is on for physical retailers to create a space that’s about more than transaction. “You can do your functional shopping online. It’s not like you need to leave the house for that,” Wehrle says. “If you can buy it on the internet, you need a real reason to go to the store.”

Founder Harry Selfridge was one of the first to approach retail as theatre. When French aviator Louis Blériot became the first person to cross the English Channel in an airplane in 1909, Selfridge decided to put the plane on display in store, with appearances from the pilot himself, drawing crowds of over 150,000.

Selfridges has since been focused on hosting immersive retail experiences, from its Roof Garden — a space that has been transformed into everything from a sweeping ice skating rink to thematic pop-up restaurants — to two permanent exhibition areas that host frequently changing concepts, themes and performances, curated by names like Mario Testino, Marc Jacobs and Yayoi Kusama.

Earlier this year, the store hosted a potato peeling workshop as part of a new programme that aimed to help stressed-out consumers calm down and "reconnect" with themselves. “Department stores need to ask — why would a customer come to their store?” Wehrle says. “That’s where Selfridges scores, because even if you don’t buy anything, you can experience things like the Roof Garden or their extensive food hall.”

Another hurdle faced by US department stores is that “the amount of experienced merchants, buyers and back-of-house personnel are not as experienced as before,” Burke notes, referring to the approach several American stores have taken to maintain profit margins, including layoffs. In August, Macy's announced it would cut 100 jobs as part of a restructuring of its merchandising unit. In June, Hudson's Bay Company eliminated 2,000 positions, including letting go senior-level staff at Saks Fifth Avenue.

But cutbacks often feed a vicious cycle. “The US retail scene has been very challenged and as a result, they’ve had to pull back financially. With so many cuts, today’s merchants and buyers have become so numbers-driven that it’s very hard for them to take a lot of risk,” Burke says. “There’s less exciting merchandise because they’re so concerned about sell-through.”

By investing up front, Selfridges has managed to successfully execute an offensive strategy. “The sense I get from Selfridges is that they’re trying to do many new things,” Burke says. “They’re taking risks and really showing off their fashion products.”

To be sure, it’s not just sound business practises, sprinkled with a bit of magic dust, powering Selfridges’ success. The retailer has also benefited from an increase in tourism following the fall in value of the pound since the Brexit vote in June 2016.

“Luxury retailers in the UK have discreetly increased their price points to help offset weaker traffic in other European stores, taking advantage of spiked demand and helping to build in the impact of rising inflation in 2017,” Strachan says “However, overseas visitors were still able to take advantage of lower prices versus their home market — leading to higher volumes and margins.”

But while tourism has benefited Selfridges, there is little doubt that its initiatives are also driving domestic footfall and spend.

Why American Department Stores Are 'Broken'