PARIS, France — Kering showed rare signs of weakness last week, when the French luxury group released its latest set of earnings. The primary issue: Gucci, on which the company relies for the bulk of its sales, grew more slowly than expected.

Gucci’s comparable sales rose 13 percent in the second quarter: fast when compared to the wider luxury industry but a far cry from the brand’s performance in the same period last year, when sales shot up by 40 percent. In the US, Gucci sales actually fell by 2 percent from a year earlier, with analysts blaming US-China trade tensions and a strong dollar. The uproar in February over a “balaclava” jumper that reminded some of offensive blackface make-up didn’t help.

Kering executives have repeatedly warned over the last year that Gucci’s torrid growth would slow sooner or later. But the company has also stated its aim of getting its other brands to pick up the pace. That hasn’t happened. Brands like Saint Laurent, Balenciaga and Alexander McQueen have performed well, but they haven't come anywhere close to Gucci’s success. And some may be in for slow fades of their own as trends shift (many fashion experts cite Balenciaga’s Triple S sneaker, a key driver of sales, as particularly vulnerable).

That’s left Kering more reliant than ever on Gucci for sales and profits. In 2018, Gucci made up around 60 percent of revenue and 80 percent of Kering profits (compared with 52 percent and 63 percent in 2015). With Gucci falling back to earth, analysts and investors are stepping up calls for the company to take more radical steps to reduce its dependence on its cash cow.

Kering’s shares fell 8.6 percent after the results were released on Thursday. They ended Monday up 1.2 percent at €479.10 per share. 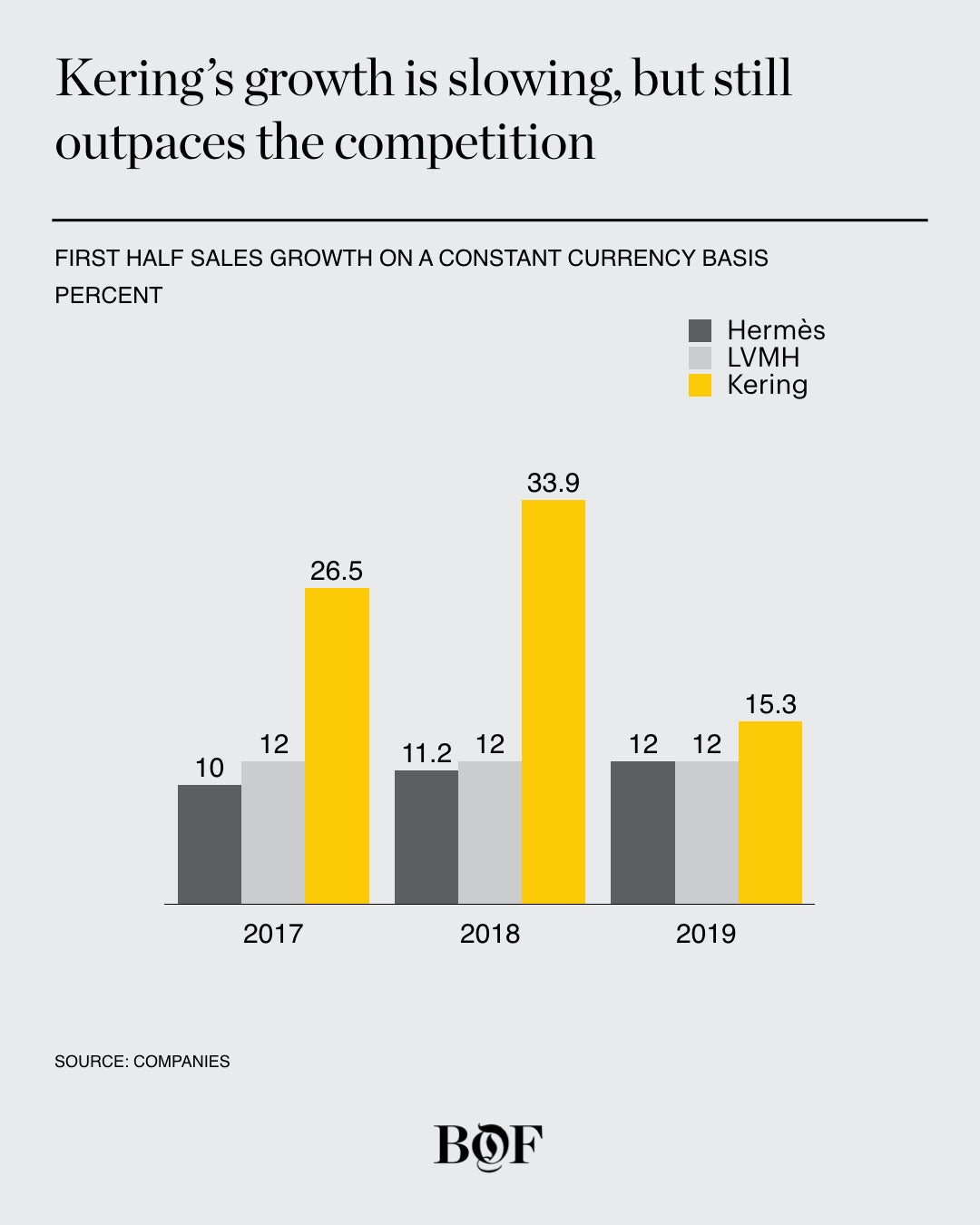 One reason Gucci’s growth came up short: the brand spent less on marketing in the second quarter (4.5 percent of sales compared with an average 6 to 7 percent for the sector), according to Aurélie Husson-Dumoutier, a luxury analyst for Kepler Cheuvreux.

Kering management acknowledged that Gucci has been a bit more discreet in terms of communication in the US this year. In February, Gucci faced the backlash for its “balaclava” knit polo neck jumper, which it was forced to remove from shops. Customers said the jumper, which featured large red lips, resembled blackface.

“I think that we wanted to assess… the reaction of the consumers after the issue we had in the US before deciding some more marketing initiatives because we were fearing that the return on this additional investments would be very poor considering the context,” Kering Chief Financial Officer Jean-Marc Duplaix told analysts last Thursday.

Analysts expect Gucci to step up marketing in the second half of the year, potentially stemming its sales slide.

But what of Kering’s plans for its other brands?

Saint Laurent, which is the second largest contributor to Kering’s profits saw comparable sales rise 15.8 percent in the second quarter, outpacing Gucci for the first time in years. However, even that pace was below 19.8 percent growth in the same period in 2018.

Balenciaga, though set to "substantially" pass the €1 billion mark this year, according to Kering, is unlikely to double in size again, as it did in 2018. The sales of its blockbuster "Triple S" sneakers seem likely to suffer from waning demand for the chunky sneakers that have become hugely popular in the last few years.

Bottega Veneta performed better than expected (0.8 percent sales growth on a like-for-like basis in the second quarter beating a consensus at -5 percent), but the brand has yet to take off under new creative director Daniel Lee.

“Just like for Burberry, we’ll have to wait several quarters until we see confirmed momentum,” said Husson-Dumoutier, referring to the time it took to see creative director Riccardo Tisci's efforts reflected in the British brand's results.

An acquisition is Kering’s best path forward, some analysts say. The company has repeatedly floated the idea of buying a rival, though the high valuation of many luxury brands has stayed the conglomerate’s hand. Valentino and Tiffany & Co. are often cited as potential targets.

Kering’s “Gucci problem” may nudge it toward pulling the trigger on a major deal, analysts say. The company has low debt levels and is sitting on €2.5 billion in cash.

“Acquisitions, if any, are likely to be significantly larger than in the past, we think, owing to the rapid deleveraging of the balance sheet, the need to reduce the 'Gucci-dependence' and the difficulties Kering had to integrate and/or develop mid-sized brands acquired in the past,” said Citi analyst Thomas Chauvet, adding that what the group needs is a sizable brand that's “plug and play."

In the meantime, all eyes are on still on Gucci, which is expected to surpass €9 billion ($10 billion) in sales by the end of the year.