A survey commissioned by BoF found that teenage girls in the US overwhelmingly prefer beauty chain Ulta to rival Sephora.

A survey commissioned by BoF found that teenage girls in the US overwhelmingly prefer beauty chain Ulta to rival Sephora.

Not so long ago, America’s beauty market could be divided into two distinct camps: on one side was Sephora, arbiter of everything cool, young and hip. On the other was Ulta Beauty, which made up for its lack of flair with lower prices and sheer ubiquity in strip malls from Portland to Paducah.

But Ulta has managed to flip the script with a highly desirable set of consumers: Generation Z prefers the chain to its main rival by a margin of 57 percent to 43 percent, according to a survey of 350 girls aged 15 to 21 conducted by Perksy on behalf of BoF. An April survey by Piper Jaffray revealed a similar shift, with more teenage girls choosing Ulta over Sephora for the first time.

How did Ulta pull this off? In short, by making its stores the exclusive destination for a long list of brands that teenagers find irresistible. Want to pick up a can of Lime Crime’s “Unicorn Hair” glitter spray? It’s only at Ulta. Looking to sample one of Colourpop’s eyeshadows? Better head to Ulta. The chain’s product mix - a jumble of downmarket and luxe brands - plays into Gen Z’s indifference to segmentation by price. 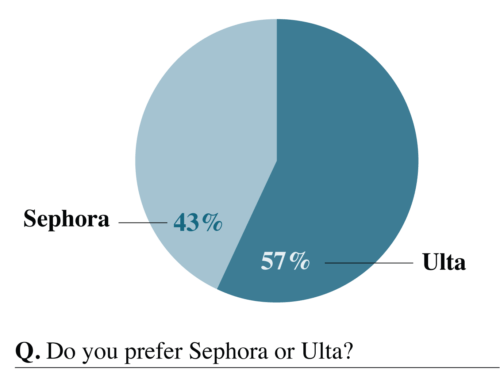 By contrast, Sephora’s predominantly high-end offerings hold less appeal for young consumers who don’t care if their eyeliner costs only $3 (or if they bought it in a strip mall). To be sure, LVMH-owned Sephora has plenty of draws of its own, from its “Clean at Sephora” additive-free beauty label to its exclusive arrangement with Fenty Beauty and Huda Beauty. The retailer is doubling down on its prestige exclusives next month, outfitting 200 stores with “Sephora Next Big Thing” displays, featuring items from colour brands that are difficult to find in brick-and-mortar stores.

“Ulta’s more diverse in its options – and with Gen Z being a lot more in a discovery phase of their life, the ability to have so much diversity is important,” said Nadia Masri, founder and chief executive of Perksy, which specialises in Gen Z and millennial market research.

If Ulta maintains its hold on teens, the ripple effects could extend throughout the beauty industry. For a brand, choosing Ulta or Sephora is a seminal decision that can set the tone of a business for years to come. The right retail partnership can turn a tiny start-up into a billion-dollar brand, or guarantee an established label’s latest launch is a hit. Some liken the relationship between brand and retailer to a marriage, with multi-year exclusivity deals the industry equivalent of a prenup.

After almost a decade of selling solely via its own website, Lime Crime was added to Ulta’s website in October 2017 and was in 450 stores by mid-2018. The reason: demand from customers who visited the label’s elaborate activations at Beautycon, said Lime Crime Chief Executive Stacy Panagakis. The festival, which is popular with mass brands but has struggled to bring in luxury lines, proved there was an offline appetite for Lime Crime, with Ulta being the best fit, Panagakis said. This year, Ulta will comprise 30 percent of Lime Crime’s sales.

Ulta’s success with Gen Z also marks a new chapter in the rivalry between the two chains, which has intensified in recent years as they have begun to play on each other’s turf.

Ulta was founded in 1990, specialising in affordable cosmetics and fragrances for the US market. Sephora started in Europe in the 1970s, opening its first American store in New York in 1998, with a luxury focus.

The two have begun to compete more directly as they opened more stores: today, Ulta has 1,200 locations in North America, while Sephora will have 430 stores by the end of 2019.

Ulta’s sales for 2018 were $6.7 billion. LVMH does not break out revenue for Sephora, but LVMH Chief Financial Officer Jean-Jacque Guiony said in April that the US makeup business was “a little bit under pressure,” offset by strong growth in skincare. 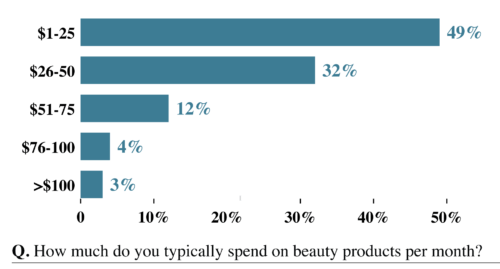 Even two years ago, Sephora was taking the US cosmetics market by storm with its aspirational products, while Ulta was seen as the less-sexy alternative precisely because of its large assortment of low-priced brands. But as Gen Z shoppers enter the market, their purchases show they care more about founders’ biographies and what a brand stands for, and less if a line is categorized as “mass” or “prestige.” Almost three-quarters of the Gen Z’s who participated in Perksy’s survey said they “don’t care if a brand is ‘prestige’ or ‘mass.’"

“It’s constantly going to be an evolution between these two powerhouse specialty retailers and there’s a place in the environment for both,” said Erinn Murphy, a senior research analyst at Piper Jaffray. “Still, the biggest distinction of Sephora versus Ulta… comes down to assortment and particularly how the Gen Z shops.”

“Assortment” in this case has two meanings: Ulta’s popular exclusives, which added $75 million to fourth-quarter revenue, but also the chain’s decision to carry products across the pricing and prestige spectrum. Ulta and Sephora both stock products from Chanel and Tarte, but only the former carries bargain brands like Nyx Professional Makeup and Morphe.

Enticing Gen Z with Kylie Cosmetics, Colourpop, Lime Crime and Morphe has been successful in the short term for Ulta, but this power over teenage minds and wallets could prove fleeting.

Ulta’s products, rather than its stores or customer service, are its main draw; if a rival signs the next hot cosmetics start-up, they could erase the chain’s current advantage. Sephora has deep pockets, as does Amazon, a relative newcomer to the beauty space that has made inroads with Gen Z. Sephora has begun to expand its offering of affordable products, though a move into true downmarket brands is unlikely. The Inkey List, an ingredient-focused skincare line positioned similarly to The Ordinary, sells hyaluronic acid serum for just $7.99.

Ulta also hasn’t shown it can maintain its edge when its teen customers grow up. Sephora is the exclusive US retailer for Drunk Elephant, a skincare line popular with millennials. It’s also ahead of the curve on major beauty trends, including CBD beauty, and promotes “clean” products with its own “Clean at Sephora” seal. The retailer has Fenty Beauty, its crown jewel, which was the biggest launch of 2017 and continues to be a favourite across generations.

"A lot of people have this misconception that Gen Z only wants the hot new brands like the Morphe’s, the Too Faced’s and Kylie Cosmetics, but they also have a preference around quality and legacy brands,” said Beautycon chief executive Moj Mahdara.

Both Ulta and Sephora face challenges from smaller retailers, which have focused on offering a better in-store experience or offering a narrow, but well-curated selection of products.

Teens crave the “playpen approach” to experiential brick and mortar retail, said Lucie Greene, chief futurist and Wunderman Thompson. She cited Glossier’s flagships and Winky Lux’s SoHo outposts as best in class, versus Ulta’s more traditional way of selling. Beautycon is the “best Gen Z retailer” due to the festival’s ability to combine buying and entertainment, she said.

Mainstream beauty retailers have been slow to embrace Gen Z trends, including a backlash against “Instagram perfection” and an embrace of “grotesque beauty,” as seen in Gucci’s new makeup campaign. The rise of gender fluidity in beauty and a preference for the “hypernatural” (think Justin Bieber declaring “pimples are in” on Instagram) also continue to dominate the conversation amongst today’s empowered youth. Computer-generated influencer Lil Miquela, and more recently, Dazed Beauty’s “born on the internet” makeup artist Dadeko, have followings that rival human influencers.

“It’s still so new for us, we’re still learning how that Ulta consumer is going to react to our ‘weird’ colours. We have a green blush,” Lime Crime’s Panagakis said with a laugh. “We want to make sure that we're bringing our brand to life in Ulta so we’re going to show weird colours for sure.”

Gucci releases its “manifesto of beauty.” Tied to the launch of a 58-piece lipstick collection, the brand’s new campaign is rooted in the idea that "makeup should not mask, but rather exalt, flaws and make them part of the language of beauty.

Beauty turns its focus to airports. Airports can serve as a good litmus test for beauty brands looking to test new innovations or concepts, as beauty accounts for approximately one-third of the duty-free market.

E.l.f. Beauty is on the up and up. The brand posted improvements in its most recent quarter, which Chief Executive Tarang Amin attributes to “Project Unicorn,” a packaging and shelf merchandising initiative.

Brand defends need for “male-specific” makeup. Cosmetics line War Paint, which has been accused of aggressive masculine marketing, stands by the philosophy that its products are “individually designed” for men’s skin.