This week, the e-commerce giant took another step towards realising its ambitions in fashion, launching a new ‘try before you buy’ service, Amazon Prime Wardrobe, and a reported distribution partnership with Nike.

This week, the e-commerce giant took another step towards realising its ambitions in fashion, launching a new ‘try before you buy’ service, Amazon Prime Wardrobe, and a reported distribution partnership with Nike.

“Software is eating the world,” wrote Marc Andreessen, one of Silicon Valley’s most highly respected entrepreneurs and venture capitalists, in a seminal 2011 essay. “We are in the middle of a dramatic and broad technological and economic shift in which software companies are poised to take over large swathes of the economy. More and more major businesses and industries are being run on software and delivered as online services — from movies to agriculture to national defence.”

There is perhaps no better example of Andreessen’s mantra than the rise of Amazon. On Tuesday, fresh off a bid to acquire organic grocery chain Whole Foods for $13.7 billion, the world’s second-largest retailer added a new ‘try before you buy’ fashion service for its Prime subscribers. Dubbed Amazon Prime Wardrobe, the service is part of a wider effort to add value to Amazon Prime and transform it into what some analysts have called a complete “life bundle” as well as drive increased sales of fashion via the Amazon platform. Wells Fargo analyst Ike Boruchow called the offering “another potential nail in the coffin for the department store sector” and, shortly after the announcement, shares in major American department stores like Macy’s and Nordstorm slumped.

Indeed, as the e-commerce juggernaut sets its sights on global retail Goliath Walmart and its long-term ambitions to surpass $200 billion in sales, it’s no secret that Amazon’s founder and chief executive Jeff Bezos sees fashion, one the the world’s largest markets, as critical to success. But this week’s Prime Wardrobe announcement is just one small piece of Amazon’s wider strategy to disrupt the fashion industry.

Amazon has been targeting fashion for years. And while high-profile sponsorships of global fashion weeks and events like the Met Gala, along with advertisements in glossy fashion magazines, have done little to dispel the widely held opinion that Amazon’s unemotional front-end experience and association with discounting mean the company will never be a destination for luxury goods, more and more mass market fashion and apparel brands are selling on the platform. In a sign of continued momentum, on Wednesday, Goldman Sachs issued a client note suggesting that Amazon is close to inking a deal with American sportswear giant Nike, which could drive an additional $300 million to $500 million of sales via the site.

Are these the latest signs that Amazon will eventually eat fashion?

The company has some critical advantages over other online fashion players looking to scale up. For one, Amazon’s relationship with customers is deeply established across a wide catalogue of categories and products, making it much less vulnerable to the shifting trends that make fashion retail such a risky business. Second, there’s the company’s incredible arsenal of data linked to Amazon’s approximately 285 million active customer accounts.

Recently, the company has been channelling this data into an array of private-label apparel brands. “Amazon has been able to compile an informational ‘nuclear’ database by finitely tracking all of the gazillions of transactions that have taken place online,” wrote retail veteran Robin Lewis back in 2016. “In real time they know what’s hot and what’s not. They can then quickly find the ‘white spaces’ — styles, price points not being served.”

For the moment, Amazon is mostly targeting the lower end of the market with more basic items. But like the wave of disruptive fast fashion players who took a major bite out of luxury spending, Amazon will surely aim to develop its offering over time and slowly eat its way upmarket, layering on a more emotionally and aesthetically engaging front-end when the time comes.

Then, there’s the company’s resonance with millennials, a cohort that’s set to become the highest spending generation in history — and one that has been notoriously hard for brands to reach. Amazon is already the most popular apparel e-tailer amongst 18-to-34-year-olds in the US, accounting for nearly 17 percent of their online clothing spend, more than double Nordstrom, which came second, according to Slice Intelligence.

Finally, Amazon is also in the process of building a major logistics platform — encompassing everything from cargo to warehouses to last mile delivery — that might even draw young creatively-led fashion start-ups into the company’s fold. Called Global Supply Chain by Amazon, the platform could drastically lower barriers to entry for fashion upstarts, allowing them to partner with Amazon on everything from supply chain to distribution and focus on what they do best: design and marketing.

Yet for all its heft, Amazon remains weak in China, the world’s second largest luxury market. Indeed, the company is so underpenetrated in the country that it operates a store on Alibaba’s Tmall, a marketplace run by China’s number one e-commerce player which has the same depth of customer relationships and customer data in China that Amazon has built up in the West.

What’s more, while Amazon’s fashion offering will surely creep upmarket, it could still take time for the company to build trust with established luxury brands. Last year, LVMH chief financial officer Jean-Jacques Guiony delivered a blunt message in a conference call with investors: “We believe the business of Amazon does not fit with LVMH full stop and it does not fit with our brands,” he said. “There is no way we can do business with them for the time being.”

Meanwhile, Farfetch — a platform which connects consumers with a curated network of boutiques and brands, and has deep cultural credibilty in fashion — has just inked a deal with JD.com, China’s second largest e-commerce player and Alibaba’s closest rival, to boost sales in the country. But as Farfetch continues to scale, perhaps its fiercest competition will come, not from fashion e-tailers like Yoox Net-a-Porter or MatchesFashion.com, but from the world’s largest e-tailer: Amazon.

YSL aims to double sales in the next three years. The French fashion house said on Tuesday it plans to open 20 stores a year and boost in-house production, part of a wider strategy to almost double its sales in the next three-to-five years. YSL’s goals, laid out by chief executive Francesca Bellettini, mark a new chapter for the brand which aims to expand its business by focusing on millennials.

Kering responds to “Made In” allegations. The luxury conglomerate denied allegations by eyewear retailer Selima Optique claiming that it labels China-made eyewear as "Made in Italy." The accusation follows a report in The Guardian last weekend stating that Louis Vuitton shoes were made in Romania, yet marked “Made in Italy.” The practice of manufacturing products in countries with low labour costs, then finishing them in Italy to attain "Made in Italy" labelling is known to be common within the luxury industry.

Louis Vuitton in talks to open a US factory. Chief executive Michael Burke said a US site is “being negotiated,” and that the brand may also add an additional production facility in France, and expand its workshop in Portugal. LVMH chairman Bernard Arnault first floated the possibility of a Louis Vuitton factory in the the Carolinas or Texas during a January visit to New York to meet with Donald Trump.

Condé Nast launches Vogue Poland. The publishing giant revealed on Tuesday that it will introduce a Polish edition of Vogue next year, partnering with new media venture Visteria. The move to expand its offering in Eastern Europe marks a significant shift for the company, given its caution in the past when rolling out international editions compared to its competitors. Condé Nast has only launched one Vogue edition in Eastern Europe since Vogue Russia in 1998: Vogue Ukraine in 2013.

Activist investor targets Hudson’s Bay. Land & Buildings, which says it owns 4.3 percent of Hudson’s Bay Company, urged the department store chain on Monday to consider strategic alternatives like unlocking the value of its real estate portfolio or taking the company private. In a letter to its board, the activist investor said Hudson’s Bay, the owner of Sak’s Fifth Avenue, would be better off monetising its real estate instead of focusing on failed mergers with rivals like Neiman Marcus and Macy’s.

Lululemon invests in cycling start-up. The Canadian sportswear brand revealed on Monday that it acquired a minority stake in a cycling apparel start-up called 7mesh Industries, part of a broader strategy to widen its product offering. The move will see both companies collaborate on new ventures within Lululemon’s research and development arm, Whitespace, with new products expected to land in stores by mid-2018.

J.Crew’s lenders file lawsuit over trademark assets. The lawsuit, filed in New York State Supreme Court by Eaton Vance Corp. and Highland Capital Management, seeks to claim J. Crew Group Inc. and the agent to its $1.57 billion term loan violated terms surrounding the transfer of trademark assets. The lawsuit follows a report last week that J.Crew had won the support of more than 50 percent of its loan holders to pursue a restructuring deal aimed at reducing its $2 billion debt.

M. Gemi secures $16 million in funding. The American direct-to-consumer brand, which sells Italian-made shoes at accessible prices, has raised $16 million in a Series C round to help it invest further in supply chain and predictive analytics tools. M. Gemi, which is expected to report $50 million in annual revenue this year, also plans to open up to four stores over the next 12 months with a longer term plan for international expansion. 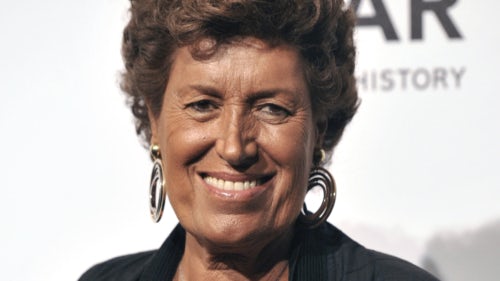 Carla Fendi has passed away. Fendi, one of the five Italian sisters credited with transforming their parents’ small leather workshop into a global fashion house, has died at the age of 79, her family said on Tuesday. She was known as the public face of the company, concentrating her efforts on promoting the Fendi brand, whose logo became an internationally recognised symbol of luxury.

Burberry chairman John Peace to step down. Peace confirmed he would leave the British luxury brand at the end of 2018, when his successor is appointed. Burberry is in the midst of a cost-cutting programme and has seen a number of senior leadership changes in the past year, as it attempts to overhaul its business. On Friday, it announced the appointment of Gianluca Flore, the former CEO of Brioni, as President Americas.

The creative duo behind Chaos launch a magazine. Charlotte Stockdale and Katie Lyall will debut the first issue of Chaos 69 in September. Distribution will be global via a yet-to-be-revealed unique source. Each issue will cover “every aspect of the Chaos life we lead,” says Stockdale. She insists that they are motivated by passion not profit. “Really we are just trying to cover our costs,” she says. “This way, the rules are ours and we can be completely free,” adds Lyall.

Farfetch partners with JD.com. The deal, which includes a $397 million investment from the Chinese e-commerce giant, will give Farfetch a powerful gateway to the world’s second largest luxury market. JD.com founder Richard Liu will also join the Farfetch board. The news underscores Farfetch’s global ambitions and comes amidst reports that the company is preparing for a IPO in New York that could value it at up to $5 billion.

Amazon launches Prime Wardrobe. Amazon has announced a new fashion-related service that will allow members of its Prime loyalty programme to try on clothing at home before they purchase it. The move is part of a wider effort to drive fashion sales on the Amazon platform as well as add value to Amazon Prime, helping to transform it into what some have called a complete “life bundle.”