In the face of social distancing measures, photographers have embraced new modes of image-making on platforms like Zoom and FaceTime. But the long-term impact of the crisis could go even deeper.

In the face of social distancing measures, photographers have embraced new modes of image-making on platforms like Zoom and FaceTime. But the long-term impact of the crisis could go even deeper.

LONDON, United Kingdom —  Last year, fashion photographer Alessio Albi travelled with teams of over 10 people to plenty of far-flung locations including the Seychelles, Japan and Polynesia, and worked on commercial jobs and editorial commissions for the likes of Elle Italia, Rolling Stone Italia and Trussardi. Then Covid-19 struck, along with government-ordered travel restrictions, social distancing measures and plunging advertising budgets.

Now, Albi is confined to his home in Perugia, a city in central Italy, with little hope of returning to his usual working schedule any time soon. “Perugia is a smaller city [than Milan]. There are no jobs for me here,” Albi said. As a result, he has shifted his photography practice online, shooting friends and models over video calls and then posting them to Instagram, in order to keep himself busy and inspired.

The approach is by no means a big money-maker and the logistics can be tricky. Albi is used to a healthy day rate and usually works with a physical camera set-up and crew. Even so, photoshoots conducted over digital platforms like Zoom and FaceTime are becoming a popular alternative for plenty of photographers living under lockdown.

i-D magazine recently commissioned Willy Vanderperre to shoot 19 models, including Gigi Hadid, Adut Akech, Adesuwa Aighewi, Vittoria Ceretti, Mona Tougaard and others, over FaceTime. They were each asked to wear a white T-shirt and do their own hair and makeup with Vanderperre working around his subjects’ apartments over the phone to find the right light. The resulting images were then released on i-D’s website and social media channels as a digital portfolio under the banner Safe + Sound. 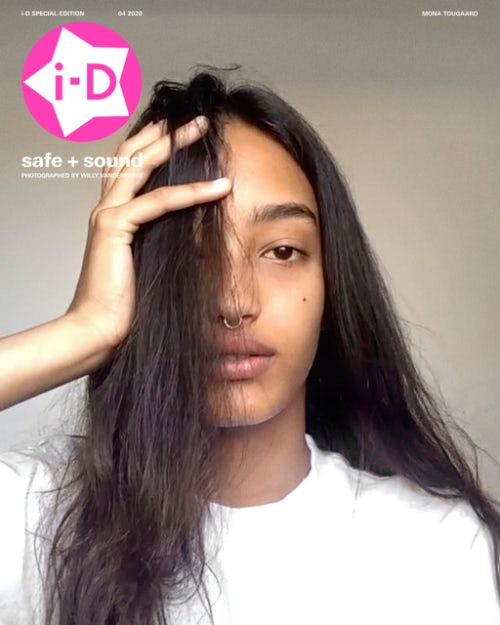 “We've always put together the print issue first… and then released highlights and teasers online,” i-D Editor-in-Chief Alastair McKimm told BoF. “But why not release things digitally first for it to become a chapter in the magazine?”

With consumer demand for fashion goods dramatically down, brands have cut back on marketing budgets with a knock-on effect for the creatives that create their campaigns and the publishers that depend on ad sales. But for now, at least, magazines (and their websites) still need to be filled, and commissioning imagery remains crucial for magazines and creatives alike who are all aiming to leverage the uptick in social media activity driven by the pandemic to engage users.

And so more and more photographers are turning to webcams and smartphone lenses, whereas they used to rely on studio equipment like large-format cameras, elaborate set designs and lighting rigs, as well as an extensive crew, in order to carry out their jobs.

For its April issue, Vogue Italia commissioned over 40 creatives, including David Sims, Harley Weir and Ibrahim Kamara, to conduct remote shoots under the title Far Away So Close. The magazine needed to work within social distancing rules and wanted to avoid pre-cooked images, which could be considered tone deaf during a public health crisis. And the resulting images included Bella Hadid, shot over FaceTime by Haley Wollen and Brianna Capozzi. “Like the issue’s white cover, these images end up challenging what is expected of our industry today,” said Ferdinando Verderi, Vogue Italia’s creative director. “They remind us that there is a way to create beauty and meaning without big productions and expensive processes.”

Similarly, M Le Magazine du Monde recently commissioned 16 photographers to shoot themselves in confinement and Karim Sadli chose to photograph a conversation with Lily Rose Depp over FaceTime. “We didn’t want to treat this as a regular fashion photoshoot with advertising constraints because of the crisis,” said Jean-Baptiste Talbourdet-Napoleone, the magazine’s creative director.

But are these new modes of image-making just stop-gap measures or fleeting novelties? Or will they have a long-term impact on the way we shoot fashion?

Nick Knight, who pioneered the intersection of fashion photography and digital media with his groundbreaking platform Showstudio, believes the adoption of new approaches is only set to grow. “We are at the tip of the iceberg,” he said. “We have great equipment at our disposal, we just have to resee it… This is accelerating what is already upon us.” Many smartphone cameras and webcams are of a higher quality than the cameras used to shoot fashion imagery in the 1960s, said Knight, who added that social media and other digital tools have also made models better versed than ever in posing and taking their own pictures.

The crisis might accelerate the process by which fashion’s visual language will engage with more than just its own beauty.

The ongoing shift from print to digital that is transforming the magazine business is another reason these innovations might stick. “If your audience is primarily online, if your magazine sells 200,000 copies but you have 12 million people online, why would you base the creation of your images on a very small part of your audience?” asked Knight.

But beyond the current trend for digital tools, scaled-down productions and stripped back hair and makeup seen with recent shoots, the Covid-19 crisis may shift the aesthetics of fashion imagery in deeper ways.

Indeed, for some, the detachment of typical fashion images from wider social issues is out of sync with a world facing growing human tragedy and economic devastation.

“I understand that, for many, the purpose of a fashion magazine is about escapism, about providing beautiful images of beautiful people in beautiful clothes,” Emanuele Farneti, editor-in-chief of Vogue Italia, said. “But there are moments when this feels weird. And this is one of those moments.”

For the photographer Thurstan Redding, whose self-portraiture was featured in M Le Magazine du Monde’s latest issue, “the crisis might accelerate the process by which fashion’s visual language will engage with more than just its own beauty.”