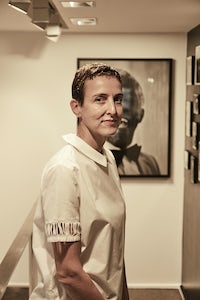 PARIS, France — In Paris, there is a ubiquitous white shopping bag that bears two cobalt blue dots, one on top of the other. More than a means of carrying goods, it’s a cultural signifier of a purchase that is current, perhaps a little kitsch and most certainly cool. “Some people think it’s the mother and the daughter,” says Sarah Andelman, the co-founder of Colette, of her store’s famous logo, debunking the myth that it depicts her and her mother Colette Rousseaux, with whom she launched the Rue Saint-Honoré institution that bears her name in 1997.

Since then, Andelman has made it her business to scour the globe for interesting things: products from a multitude of creative spheres and clashing tastes, the high and the low, from souvenir trinkets and ultra-luxurious prét-à-porter to contemporary artworks, art books and magazines, even new technology gadgets. But this doesn't come close to an exhaustive list of Colette’s wide range of product categories. The three-storey, 8,000-square-foot space is a veritable weather vane not only for fashion, but for pop culture at large — a platform for everything from the return of a niche film camera to the exclusive launch of a sneaker to the unveiling of a fine jewellery line. Next March, Andelman will have been at it for 20 years, but this Paris Fashion Week, Colette — something of a seasonal pilgrimage site for the fashion flock — is busy as ever.

“Paris was a bit off the radar, and we had the chance to travel and discover products we couldn’t find here,” says Andelman, reflecting on the early days of her family-owned and operated business — built on equal parts curiosity and frustration — that in 2015 generated more than €31 million (about $34.6 million) in revenue. “We wanted to bring [these products] all together under the motto ‘style, design, art, food’ with the idea to have a store, a gallery and a restaurant that was open all day. At the time, it was almost impossible to have lunch at 3pm in Paris! So we wanted to change that.”

And so they did. Together, the mother and daughter created one of the world’s most iconic concept stores, whose approach has been replicated and riffed upon by competitors across the globe, though none quite catching that same pop-driven sense of the zeitgeist that comes from these arbiters of taste, who live and work in the heart of the first arrondissement of Paris. “Since the beginning we have had this same mix of young designers and more well-known brands. We changed the windows every week, and voila! It’s been working like that for quite a while now,” continues Andelman, who admits a brief foray into design objects and décor was one of their few early hiccups.

They have invented a formula that you can’t copy easily, because there is only one Colette and her and Sarah are 200 percent involved.

Two decades later and their formula of perpetual innovation may be the only constant in Colette’s hectic calendar of product launches and exclusive collaborations that keep tourists and locals alike entertained throughout the year, with the promise of finding something new each time they enter the store or visit the retailer’s website. “I would say we could have up to 20,000 different products on the shop floor at one time,” estimates Andelman, counting the ground floor shelves lined with knick-knacks from snow globes and retro-style candies to tricked-out headphones, niche eyewear labels and perfumed candles.

“I must say I admire Madame Colette and Sarah a lot,” attests Karl Lagerfeld, moments after presenting his Spring/Summer 2017 ready-to-wear collection for Chanel this week. “It’s the only shop where I go because they have things no one else has. I buy watches, telephones, jewellery there — everything really! They have invented a formula that you can’t copy easily, because there is only one Colette and her and Sarah are 200 percent involved.” 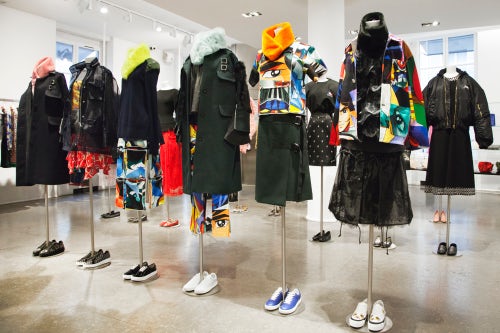 Whilst Colette’s ground floor space caters equally to the souvenir hunt of a passing traveller as it does a five-figure investment purchase of a watch or a Vertu phone, the fashion floor upstairs is an altogether different beast, with mannequins and rails hung with a meticulously chosen edit of ready-to-wear. A particular taste for both streetwear and Japanese designers has informed the store’s buy since the beginning (Comme des Garçons was one of Colette’s first labels, and the store is a loyal stockist to Undercover and Sacai, among other Tokyo-based labels), however Andelman insists that today her product selection spans far and wide. “We try and create an international mix in-store. There are no more Japanese designers than there are French, Italian and British,” she explains.

As for the store’s streetwear credentials, Colette was certainly early to embrace the fusion of luxury fashion with an edgy street aesthetic. Andelman says she stocked both categories separately and watched them slowly merge. “We started to work with people like Virgil [Abloh] before he started Off White, as well as OAMC’s Luke Meier when he came from Supreme, and with the whole wave of designers like Hood By Air. At a certain point it didn’t make sense to have them on the ground floor anymore, so they went up with the designers.”

“Sarah and Colette are supportive of creation, period, regardless of the provenance of the brand. That's why when something like a 'luxury street' trend comes along they don't have to change their formula. It's been there all along,” says Meier, whose fledgling menswear label sits in the designer section at Colette, alongside Raf Simons, Valentino and Dior Homme.

While Andelman’s personal penchant for an a-line skirt, trainers and an embellished tee or bomber is well-documented in street style photos, it only lightly influences the way she picks and chooses product for Colette, selecting what she feels are the strongest fashion messages of the season. “I see many, many collections and I make our selection by thinking of the different pieces of a puzzle, with each garment fitting in with the rest,” says Andelman, of the way she puts together a buy composed of brands as disparate as Azzedine Alaïa, Thom Browne, Vetements, Erdem, Olympia Le Tan and Christopher Kane.

It brings the light to the City of Light.

“We aren’t like a department store with brand corners and racks — although we do our best to respect the identity of each designer,” she continues. “At Colette we want to show strong pieces in equilibrium with a commercial selection, but it is very rare that I would ever choose something really basic. There should always be an attractive detail, something that sets each piece apart, makes it different and makes us want to buy it because of that.”

“I feel lucky to have the freedom to evolve permanently from season to season, because even if I know many designers, some of them friends, at a certain point they can become locked in a certain style and I think that fashion is about a perpetual change and I say ‘bravo’ to the designers who are able to reinvent themselves time after time,” she adds. Sometimes, that search for the new and unexpected leads to rather unconventional buying patterns. Colette is known to stock very small selections of a wide range of brands, rather than representing each brand in all categories, a more traditional approach. “There are no rules — if there is a season where I only like three coats from a collection, I find it a shame to skip the season and tell the brand we will come back. At the same time, I think there is a mutual respect with designers that we reflect their vision. And sometimes people go on the website and think that I only bought two pieces. But maybe we’ve already sold the rest!” 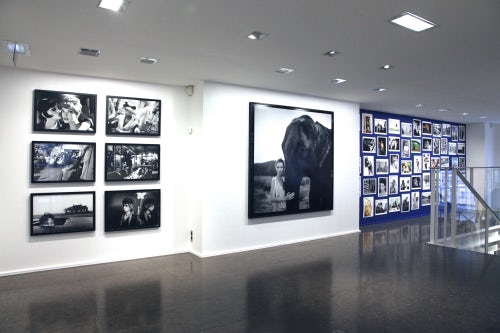 The rise of online shopping and social media have been kind to Colette. The store generates 20 percent of its steadily-rising revenue online, significantly more than the industry average. Colette has also amassed over 822,000 followers Instagram where the store messages its continuous product drops. And to eagle-eyed fans, its account is a direct window into the beating heart of Parisian taste: on last glance, the @colette Instagram featured a pair of daisy-studded cage boots from the first collection of Louis Vuitton shoe designer Fabrizio Viti, a pair of Henry Holland slogan iPhone cases and an iconic shot from the American photographer Arthur Elgort, whose first-ever Paris exhibition opened this week in the store’s upstairs gallery at Andelman’s invitation.

Indeed, Colette’s appeal remains anchored by its vibrant cultural calendar. “It brings the light to the City of Light,” says Michel Gaubert, the sound designer and fashion’s favourite DJ who has signed off many a mixtape CD for Colette. “Colette is about a constant research of new things and new ideas without forgetting elements of the past when it feels good to bring them back,” he reflects. And from around the clock dining in the Water Bar (an upcoming project will see author and "Manger" blogger Mimi Thorisson taking over the kitchen) to a plethora of book signings, concerts and even panel discussions on sneaker culture, Colette’s status as a hub for genuine cultural “happenings” helps to sustain and propagate the store’s buzzy atmosphere, accented by the heady Givaudan-designed fig scent that wafts throughout the space and onto the street.

After recreating a fun fair for their 15th anniversary in 2012 — and throwing a “Sweet Sixteen” party the year after — Andelman is tight-lipped about her plans for Colette’s 20th anniversary celebrations next March. But with her knack for savvy collaborations and an uncanny gauge for l’air du temps, we can be sure that it will be one of Spring 2017’s unmissable (and Instagram-able) moments.