The footwear brand is opening its first flagship store in the Greek capital, while also launching new products such as handbags, anklets and candles.

ATHENS, Greece — Seven years after the launch of Ancient Greek Sandals, co-founders Christina Martini and Nikolas Minoglou have finally secured a footprint in Athens with the shoe brand’s first brick-and-mortar store. “We have been looking for a store space for a couple years at least,” Minoglou told BoF. “We didn’t just want to open a store without having found the right spot.”

The right location, as it turns out, is a building that previously housed a popular Greek shoe store from 1890 and is close to the historical Syntagma Square, where neighbouring brands include Hermès, Prada and Rolex. For Martini, the decision was “strategic” because “it feels remote but it’s still in the centre,” she said. “We’re a bit hidden away on a back street but in front of a beautiful park.”

In addition to new and core styles — the latter currently accounts for about half of Ancient Greek Sandals’ revenue — the new flagship will carry handpicked items, such as premium soap, olive oil, ceramics and a selection of books on Greek artists and architects. It also will house their first collaboration with well-established Greek jewellery designers Lalaounis, Yannis Sergakis, Ileana Makri, Venyx World and Maggoosh. 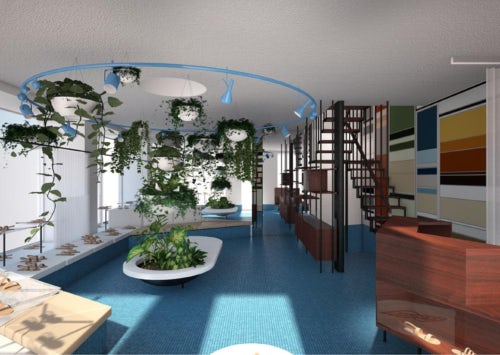 While Ancient Greek Sandals has always used a predominant wholesale model — their 350 global stockists account for 75 percent of the business, while e-commerce accounts for 25 percent — having a physical space is “a different way to interact with the customer and tell your story in your own way,” Minoglou said, projecting that the physical store will eventually account for 5 percent of the business.

The United States is currently the brand’s biggest market, accounting for 30 to 35 percent since launch, but the entrepreneurs picked Athens “because we felt that it had to be in the country where the brand was born and what it’s about,” explained Minoglou. “It’s also an exciting place to be,” added Martini, noting the many hotel, restaurant and gallery openings over the past few months. “It’s become a popular stopover for many tourists and is gaining importance as a city.”

On the whole, the Greek economy has come a long way since 2008, when the country entered a sovereign debt crisis that sent a chill throughout Europe and sent global markets into a panic. Despite starting up during this period, Ancient Greek Sandals saw an impressive growth rate of about 50 percent for the first three years. “Since then, there’s been a small slowdown [in sales],” acknowledged Minoglou. “But we’re still growing in double figures.”

As part of the launch, the duo will sell anklets priced between €60 to €80 (about $68 to $90) for the first time. The anklets will also be sold via existing wholesale partners like Net-a-Porter and Matches Fashion.

"We see it as a great extension to the brand and a key trend for the season," said Cassie Smart, head of womenswear buying at Matches, which first picked up Ancient Greek Sandals for Spring/Summer 2015, adding that "we have seen strong growth season-to-season ... They create a stylish product and a great journey of discovery, which back then felt very new, when not many luxury sandal brands outside of the established were doing it."

Despite starting up during Greece's economic crisis, Ancient Greek Sandals saw a growth rate of about 50 percent for the first three years.

The co-founders are also launching new product categories — scented candles and leather handbags, both priced at €70 ($78), which will only be sold in store — and will host a series of pop-ups with existing retail partners worldwide, starting mid-April with Le Bon Marché in Paris.

“We’ve collaborated for more than five years and have a real affection for their universe,” Morgane Toullec, Le Bon Marche’s women’s shoe buyer, told BoF, crediting the brand’s “real craftsmanship, feminine aesthetic and large selection of styles [both] iconic and new each season.”

According to Toullec, the pop-up will coincide with an exhibition at the luxury retailer inspired by “cruise” and the “seaside blue.” The pop-up will later appear at retailers like La Rinascente in Milan, Harvey Nichols in London and Bergdorf Goodman in New York.

For Martini, the priority continues to be product. “The main focus is on sandals and we’ll explore other constructions,” she said. “This year we’re launching a comfort elevated rubber sole, so it’s something between a sneaker and a sandal. It’s perfect for the city [and] comfortable to walk around or run errands. We want our sandals to be for every need and age.”

Minoglou estimates the brand will sell 140,000 pairs of sandals in 2019, a 15 percent increase from the previous year.