The Asian and European fast fashion giants that disrupted American retail are now themselves feeling pressure.

The Asian and European fast fashion giants that disrupted American retail are now themselves feeling pressure.

The business of fashion is full of examples of disruptors being disrupted. Just look at American retailers Gap and Abercrombie & Fitch, once trendsetters that came under enormous pressure from the rise of Zara, H&M and Uniqlo, European and Asian fast fashion players whose “cheap chic” formulas, offering stylish clothing at low prices, revolutionised the apparel market and drove the creation of huge multi-billion-dollar businesses.

Now, these fast fashion giants are facing mounting pressure themselves. To maintain growth, Zara has been relying on cutting prices, sending profitability at parent company Inditex, the world’s largest clothing firm, to an eight-year low. After years of expansion, profitability is also faltering at H&M, the world's second-biggest fashion company, which reported weaker than expected first-quarter sales growth on Thursday. Uniqlo, too, is facing pressure. After posting revenue growth of more than 20 percent for three straight years, parent company Fast Retailing, the world’s third-largest apparel player, reported growth of only 6 percent following its move to raise prices due to climbing materials costs.

Indeed, the world’s top three fashion retailers — Inditex, H&M and Fast Retailing — have all suffered setbacks and are looking for ways to optimise their operations and tap future growth. Uniqlo is investing in supply chain optimisation to make it more responsive to consumer demand and plans to shorten the time it takes to move product from design to delivery to about 13 days, roughly the same as Zara, which is widely admired for its agility. “We need to be fast. We need to deliver products customers want quickly,” Tadashi Yanai, chairman, president and chief executive of Fast Retailing, told Bloomberg in March.

H&M is also investing in speed and flexibility. “To meet the rapid change that is going on in fashion retail we need to be even faster and more flexible in our work processes. We are therefore investing significantly in our supply chain, such as in new logistics solutions with greater levels of automation, but also in optimising our lead times,” said H&M chief executive Karl-Johan Persson alongside the company’s first-quarter results. The group is also expanding its portfolio, launching Arket, a new brand focused on “quality” and “style beyond trend.”

Fast fashion is also looking for growth in emerging markets. Zara, for one, is expanding in Asia with a strategy that’s weighted towards e-commerce. This month, the brand launched online sales in Malaysia, Singapore and Thailand. Later this year, it plans to debut e-commerce in India, where it currently has 21 stores. Meanwhile, H&M is set to open 430 new stores this financial year, including outposts in new markets like Kazakhstan, Colombia, Iceland, Vietnam and Georgia.

But all of this does not make up for the significant challenges Inditex, H&M and Fast Retailing are facing in critical consumer markets in Europe and the US, where they are now facing some of the same challenges as their American predecessors: too many stores and changing consumer patterns, especially amongst millennials who are moving online and shifting their spend away from clothes to technology and experiences. And a rising wave of increasingly popular and potentially disruptive competitors are perhaps the main threat: digitally-focused, direct-to-consumer fashion brands, from e-tailers like Missguided and Boohoo to the universe of labels being birthed on Instagram.

Whether or not these direct-to-consumer brands have the staying power to survive, scale and pose a real threat to the behemoths of fast fashion remains to be seen. While some may have short lifespans, others may blow up. Consider the case of Nasty Gal, which — before falling prey to mismanagement — quickly grew into a business generating sales of more than $100 million a year, largely on the back of its close, social media-driven relationship with its community of “badass” girls who identified with the company’s sexpot-hipster attitude.

Fast-expanding, Los Angeles-based brand Anine Bing also grew out of the eponymous founder’s closeness to her large social media following and is now sold at over 250 stockists as well as eight of its own retail stores. What distinguishes the retail disruptors of the future might just be the strength of the communities that they are able to build, making likes, shares and comments as important as traditional retail metrics like footfall.

Theresa May triggers Article 50. Almost a year after the shock referendum result, Britain has formally initiated its exit from the European Union. While the long-term impact on the fashion industry remains unclear, the country has entered a prolonged period of uncertainty as its government negotiates an exit deal, which may include leaving the single market, brokering a new customs agreement, tightening control on immigration and striking new trade deals. 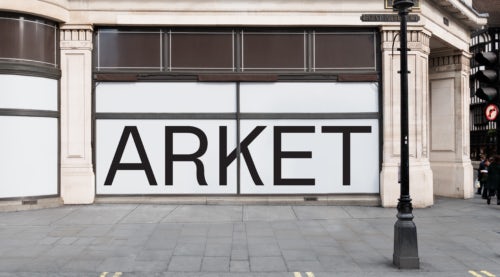 H&M unveils new brand. The Swedish fast fashion giant is launching a new retail brand called Arket. The label, which will sell own-brand products for men, women, children and the home along with some non-Arket brands, is the latest addition to H&M’s portfolio, which includes & Other Stories, COS and Weekday.

Lululemon shares slide after forecast misses estimates. Shares of the Canadian yogawear brand tumbled as much as 18 percent after its expected earnings forecast fell well below analysts’ estimates. Lululemon’s performance, which CEO Laurent Potdevin attributed to a “slow start” to 2017, underscores the challenges facing many brands in the athleisure market, which has become increasingly saturated and reliant on heavy discounting.

Coach said to be readying to buy Kate Spade. According to sources inside both companies, Coach’s acquisition of the accessible luxury brand will be announced shortly, with analysts suggesting the deal could could be north of $2 billion. Coach has been open about its long-term strategy to increase shareholder value through diversifying assets, and last year was reported to have made several offers for British luxury firm Burberry.

Uniqlo partners with Jonathan Anderson. The Irish designer and creative director of Loewe is the latest major designer to collaborate with the Japanese apparel giant. He joins the ranks of Jil Sander, Carine Roitfeld and Inès de la Fressange who have all previously worked with Uniqlo. The Japanese retailer is renewing its efforts in the US, by closing stores at second and third-tier shopping malls and opening locations in target-audience cities like Denver and Chicago.

Models speak out about poor conditions. A survey published on Models.com has unearthed new allegations of the degrading treatment, poor working conditions and racism experienced by fashion models. The survey shines a light on the issue of models’ rights, something often ignored in the industry, and follows fashion’s recent whistle-blower, casting director James Scully, who took to Instagram to accuse Balenciaga casting directors Maida Gregori Boina and Rami Fernandes of abusive behaviour.

Maxime Simoëns named artistic director of Azzaro. The French designer, whose appointment is effective immediately, succeeds Arnaud Maillard and Alvaro Castejón, who left the fashion house, founded by Loris Azzaro in 1967, in July 2016. Simoëns will oversee the label’s couture collections, ready-to-wear and accessories. He will continue to operate his own label, which relaunched as an accessible, menswear-only brand, M.X Paris, in 2016.

Matchesfashion.com releases financial results. For the first time, in a detailed report, the British multi-brand retailer revealed full-year revenues were £204 million, up an impressive 61 percent year-on-year. Sales from its e-commerce platform, which launched in 2007 and now accounts for 95 percent of total sales, also increased 73 percent. The results underscore the 30-year-old company’s transformation from a small boutique in London’s Wimbledon Village into a major e-commerce player.

Amazon wins bid to buy Souq.com. The US e-commerce behemoth topped an $800 million bid by Emaar Malls PJSC to buy Dubai-based online retailer Souq.com, in one of its largest acquisitions in recent years. Details of the deal were not disclosed, but Souq.com was valued at $1 billion in its last funding round, according to reports. While the Middle East has fallen behind many other markets in e-commerce, the announcement suggests Amazon is betting it will soon take off.