LONDON, United Kingdom — When smart Londoners of a certain age think of Joseph, the British retailer’s iconic founder Joseph Ettedgui and his inimitable eye come to mind. From humble beginnings — the Moroccan-born Anglophile started his fashion empire in the 1960s, selling sweaters by the then-little-known Japanese designer Kenzo Takada out of the hair salon he ran with his brother on London’s King’s Road — Ettedgui had, by the time of his death in 2010, built an influential network of Joseph stores spanning London, Paris and New York.

His shops, with their slick, monochromatic palettes and chrome and glass architecture (first designed by Norman Foster), are seen as predecessors to the modern concept store, laying the foundations for Colette in Paris and Milan’s 10 Corso Como. He introduced Chelsea to the likes of Azzedine Alaïa and Helmut Lang and was the first British retailer to stock Prada.

But Ettedgui was a designer in his own right, launching Joseph’s own-brand label in 1972 to provide women with beautifully-made basics alongside his imported designer wares. After all, “An entire wardrobe can’t be made up only of designer clothes,” he explained. Today, the accessibly-priced Joseph brand is the beating heart of the business, accounting for 87 percent of the company’s worldwide sales in 2015.

Indeed, many a London-based fashion editor or luxury industry professional swears by Joseph garments.  “I grew up in London and all the girls at school lusted after a Joseph jumper,” says Lara Mingay of luxury PR firm LM Communications. “It always makes you feel well-dressed. It’s easy to move in, easy to travel in. It’s never loud and always looks chic. It’s like an old friend because it’s always been consistently good.” 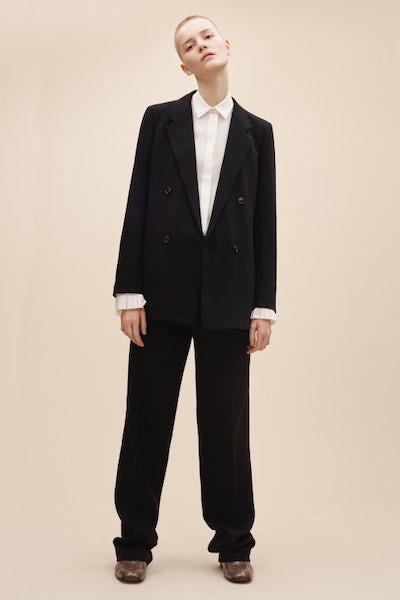 A private label is not a novel business strategy among multi-brand retailers. From 2010 to 2015, the global market for private label apparel and footwear grew at a steady compound annual growth rate of 1.9 percent, according to data from Euromonitor. Department stores such as Barneys, Saks Fifth Avenue and Harrods have long produced own-brand collections. Typically consisting of basic pieces at more affordable price points than the designer brands they sit alongside, these lines can be a way for stores to fill in the gaps in their designer offering. Because they are designed and manufactured in-house, private labels have a number of financial and logistical advantages. "You're able to get a very strong margin on these items — you can control markdowns, you can control sales periods," explains Robert Burke, chairman and chief executive of consulting firm Robert Burke Associates.

But while some retailers produce private labels as a way to cover the cost of selling designer brands at low margins, Joseph’s private label has been a vehicle for international expansion. “When I joined the company four years ago [in 2012], I felt that everybody believed that Joseph had the potential to grow itself — not only mixed in with the international brands,” says Takehiro Shiraishi, managing director of Joseph.

For Shiraishi, growing the business through its private label makes more sense than trying to grow the network of multi-brand shops that made the retailer famous. Its mono-brand stores make up the vast majority of Joseph’s retail network (today, of the company’s 100-plus stores, only seven are multi-brand) and in Japan — where Onward Kashiyama, the company that bought Joseph in 2005, is based — only Joseph own-brand stores exist.

Expanding into new markets through multi-brand stores is also problematic. Last year, the business opened its first two Chinese mono-brand outposts in Beijing through a franchise partner and plans to roll out a further 13 in the next four years. “The local knowledge our franchise partners have of their markets is essential to growth when we’re establishing Joseph in a new region,” Shiraishi says. However, “We don’t do mixed branded stores with partners because it is so difficult to control what they buy… We would have to check every brand name they proposed to market under Joseph’s name.”

Concentrating on Joseph’s private label also allows the company to expand its wholesale distribution — a channel Shiraishi sees as “crucial” for exploring new markets, such as Asia and the Middle East.

But pursuing global expansion through the Joseph private label posed two key challenges for the business: competing in the contemporary market, and winning wholesale stockists, which often have large shoe and accessories departments. “We needed to propose a product mix that would complete the Joseph lifestyle,” Shiraishi says. “Other contemporary market designers do 60 percent of their sales from the accessories business. They survive with the accessories line.”

To round out its product offering, this year, the Joseph brand is expanding into two new categories. Shoes, which were launched as part of its Pre-Fall 2016 collection, will arrive in stores in June, while handbags will be introduced for Spring/Summer 2017. Shiraishi hopes to build up accessories to account for 15 to 20 percent of the Joseph brand’s sales.

For businesses looking to make their private labels more relevant, having a greater focus on fashion trends is a way forward, advises Robert Burke. “[Own brands] used to do a big business with v-neck and crew-neck cashmere sweaters. Today, those basics have been filled by the Uniqlos and the J Crews,” explains Burke, who says today’s successful private labels are producing “more of a fashion basic.”

It’s a trajectory that the Joseph label has been following. Under Louise Trotter, its creative director since 2009, the line has become more fashion forward, offering its interpretation of recent trends alongside the classic silhouettes that made Ettedgui successful. Today, while customers might “buy a simple pant from us to wear with a designer piece, they’re also buying Joseph head-to-toe,” she continues. “That’s the advancement.” 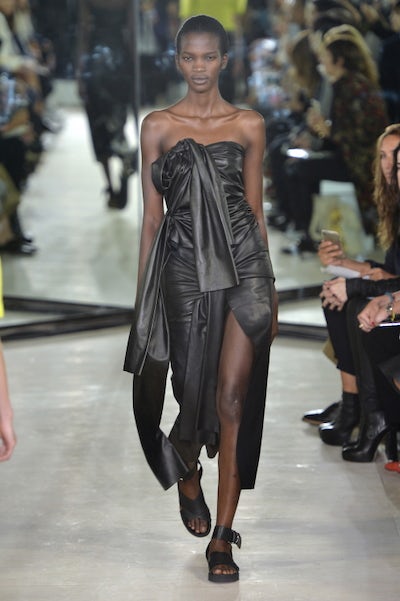 But despite its evolving collection, Shiraishi says the brand still lacked awareness amongst international consumers. For retailers trying to transition their private labels into bona fide brands, perception can be their biggest problem, concurs Bernadette Kissane, apparel and footwear analyst at Euromonitor. “Flipping their business models around — going from buying wholesale, to developing a brand, to then being a wholesaler,” poses challenges, she says, but “the biggest catch is to gain the credibility as a brand… It takes a lot to establish and create demand for it.”

“Joseph has always been well known in the UK and the French market,” Shiraishi explains. In February 2014, to put the brand on the map, Joseph made its London Fashion Week debut, holding a catwalk show to celebrate the 25th anniversary of Joseph’s 77 Fulham Road store. The business had already been under pressure from existing wholesale distributors to develop a show collection, says Trotter, who adds that the “incredible” response to the show prompted the company to create a fashion-focused show collection for Joseph every season. The impact of this decision on Joseph’s wholesale business has been tangible. Since 2014, wholesale has grown 10 percent year-on-year, and now accounts (along with franchising) for 37 percent of the Joseph brand’s annual sales.

Other specialist retailers have also benefited from making their in-house labels more fashion-focussed. The Outnet’s Iris & Ink, which launched in 2012 as a 35-piece capsule collection of basics, has since quadrupled in size and added more directional designs that have helped make it one of the site’s top five brands in terms of sales, says Shira Suveyke, executive vice president and chief merchant of The Outnet. Likewise, last year luxury e-tailer MatchesFashion.com launched Raey, a trend-driven private label that “now accounts for substantial numbers in revenue and is always on the bestseller list,” says Ruth Chapman, co-founder and co-chairman of Matches. “The brand is successful because of its strong fashion DNA, rather than being basics or essentials,” she says.

When it comes to creating a successful own-brand collection, according to Robert Burke, specialist retailers like Matches and Joseph have an advantage over larger department stores. “They’re smaller operations, usually dealing with fewer total stores… so the ability for them to be in touch with their customer is greater. [When] you know your customer, you’re able to address their needs,” Burke says.

Department stores, however, are following suit. Last year, Nordstrom — which already had a range of private labels across apparel, accessories, homeware and beauty that aim to “compliment and round out existing national and international brands,” says Mark Tritton, executive vice president of Nordstrom and president of Nordstrom Product Group — launched a private label designed by Caroline Issa, chief executive officer of Tank magazine. This February, the department store debuted another collection in collaboration with street-style star Olivia Palermo.

For Joseph, developing its own brand has contributed to a 20 percent growth in retail sales in the last two years. But while the fashion collections “send our message to the market,” says Shiraishi, it is still the brand’s pre-collection — more in keeping with Joseph’s luxury essentials origin — that makes up the bulk of the private label business. The breakdown between the pre- and show collections “is probably 80/20 or 85/15,” he says.

“Joseph has grown into something much bigger than a private label,” says Trotter. The fashion week stalwarts in London this weekend would agree.