The brand engineered a stellar revival after more than a decade of decline, hitting over $3 billion in sales in 2019. Now it’s looking to regain momentum with renewed focus on performance wear.

The brand engineered a stellar revival after more than a decade of decline, hitting over $3 billion in sales in 2019. Now it’s looking to regain momentum with renewed focus on performance wear.

Before Nike and Adidas, there was Fila.

Founded in 1911, the Italian heritage brand is celebrating its 110th anniversary with a special collection that debuted at Milan Fashion Week yesterday. Industry veterans Katie Grand and Ed Buchanan dove into the brand’s archives to reimagine looks for the modern audience: the result is a collection full of bold logos and vintage sporting silhouettes that sit naturally with the current trend for cool-yet-comfy athletic wear.

Fashion’s love affair with sportswear, logo-mania and ’90s nostalgia has served Fila well in recent years. After years in decline, a successful reboot led to a spot on the Milan Fashion Week schedule in 2018 and a surge in brand desirability driven by the successful re-release of the chunky Disruptor sneaker, which debuted in the mid-1990s.

The style catapulted the brand into the fashion zeitgeist, as desire for retro trends and ugly ‘dad’ sneakers skyrocketed. In 2018, the shoe was among the most-searched fashion items on global shopping platform Lyst, second only to the Gucci logo belt. Brand collaborations with hot luxury labels like Fendi and Gosha Rubchinskiy only fuelled the Fila buzz. In 2019, Fila Holdings, the Korean-based parent company that owns Fila’s Korean and US arms, generated revenues of 3.4 trillion won ($3.1 billion), up 17 percent year-on-year.

But the brand’s latest collection is debuting in a much less certain climate. The pandemic derailed Fila’s growth, with revenue for the nine months ending September 30 declining 12 percent compared to a year earlier. The company will report fourth quarter results mid-March.

It’s not as steep a loss as some competitors experienced: Adidas saw sales drop 18 percent year-on-year over the same period, while its sister brand Reebok suffered a 20 percent year-on-year decline. Fila’s performance is more or less in line with the global sportswear market, which saw sales drop 14 percent to $293 billion in 2020, according to Euromonitor International.

Chairman Gene Yoon is determined to forge ahead with the company’s longer-term growth plan. After Yoon acquired Fila’s global brand assets in 2007, the label found success by repositioning itself as a fashion-lifestyle brand. Now, Yoon wants to reestablish Fila within the performance space too.

Fila was born as a performance brand...Our soul is sports.

Though it was founded as an underwear brand, Fila started to grow its sportswear business in the 1970s, dressing tennis players like Bjorn Borg and Guillermo Vilas. In the ’90s, it gained traction with the basketball community in the US, and signed talent like Grant Hill. But over expansion and loss of focus led the brand to decline in the early aughts, while competitors Nike and Adidas consolidated their dominant hold on the sportswear market.

Today Fila continues to have a toehold in the performance sector, although it significantly lags its American rivals. It’s signed more than 30 athletes, including tennis players Ashleigh Barty, Karolina Pliskova and Sofia Kenin, and sponsors events including the Bejing Open and the Rio Open.

“Fila was born as a performance brand, Fila is a sports brand,” said Yoon. “It’s extremely important, we have to invest continuously more to really back up the performance business. If not, we’re going to lose our soul. Our soul is sports.”

Yoon’s next challenge is convincing consumers to think of Fila as a go-to for running shoes or basketball sneakers, instead of just a destination for fashion trainers.

“They’re primarily a fashion footwear brand,” said Matt Powell, sports industry analyst at The NPD Group. “They do have some shoes that we consider performance running, for instance, but it’s a small piece of the overall business. Right now, I would say, it’s viewed in the US as a fashion brand.” 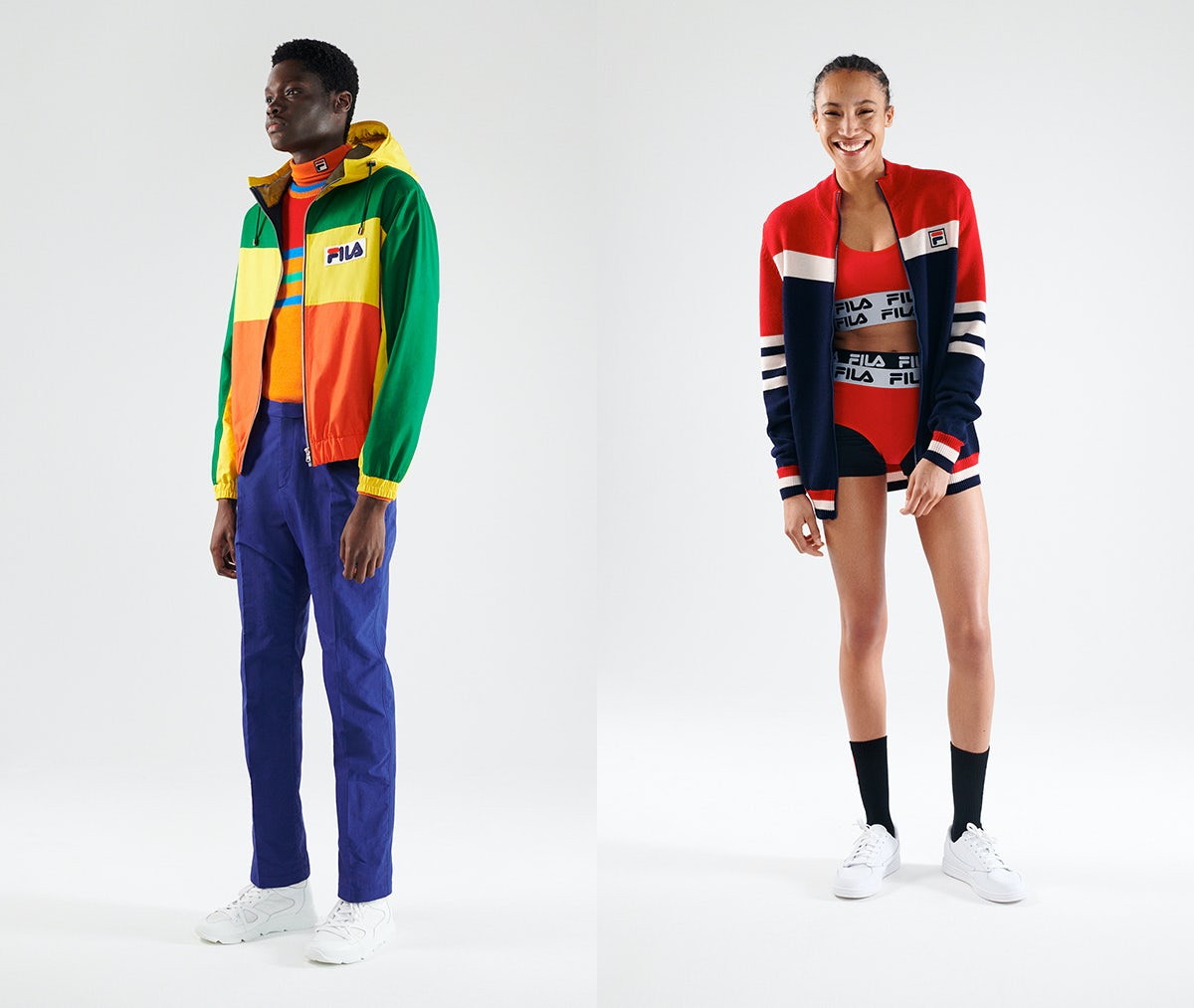 Recreating the Disruptor’s fashion market success with a technical shoe won’t be easy to pull off. Competition in the performance space is particularly fierce. Fila is still small compared with the likes of Adidas and Nike, which rack up tens of billions of dollars in sales annually. Meanwhile, shoe brands like Asics and New Balance join Nike and Adidas in dominating the performance footwear sector in the US. Younger players like Hoka and On Running are increasingly gaining traction.

Fila also needs to prove its technical chops, as market share gains really rely on the strength of a brand’s product to enhance the wearer’s sporting abilities. As of yet, Fila doesn’t have significant clout in the performance space, even though top athletes like Barty wear the brand while playing competitively.

“It’s a very crowded space, especially the running side,” said Powell. “You’ve got a whole lot of people you’re competing with, all of whom are making great product. It becomes much more difficult for a brand to break through that.”

The plan is to expand Fila’s technical footwear offering across tennis, basketball, running and golf and ramp up professional athlete endorsements. Yoon said the company also plans to dial up investment in its product development team, leveraging its large product development and merchandise testing centres in Korea and product sourcing centre in China.

The company must also grapple with some basic operational challenges that could put it at a disadvantage heading out of the pandemic. It has limited e-commerce penetration — prior to the pandemic, online only accounted for 1 to 2 percent of Fila Holding’s direct sales, said Yoon — and relies on wholesale relationships in the key US market, dampening Fila’s margins.

It also operates under a convoluted model that’s at odds with broader consolidation in the market. The Korean parent company directly controls businesses in the US and Korea, but operates via licensing deals with local partners in other global markets. In China, Fila is owned by local sporting giant Anta Sports, although Fila Holdings retains a 15 percent stake in the business.

Yoon argues licensing partnerships with local players are preferable when it comes to apparel, due to the seasonal discrepancies and fit issues that come with operating as a global brand. Asian shoppers, for example, tend to require smaller fit specifications than Western customers, Yoon says. Growing Fila’s e-commerce operations in the US market is a particular priority, as this will help will help bolster the brand’s direct-to-consumer revenues at a time when pressure on the traditional wholesale model continues to mount. Currently, online business makes up “low single digits” of Fila’s overall sales in the US market, the company said.

At the same time, the company must find a way to sustain momentum in the fashion market as tastes move on following the last year of crisis. Fashion week may be falling out of favour with some brands, but it will remain an important part of Fila’s strategy. More collaborations with luxury players and hot designers are also on the cards to retain “freshness” and “coolness,” said Yoon.

Editor’s Note: This article was revised on March 1, 2021. An earlier version of this article misspelled Ashleigh Barty’s name. It was updated again on March 2, 2021. A previous iteration stated Fila sponsors the Davis Cup. This is incorrect.