NEW YORK, United States — The son of a geologist, Kim Jones, Louis Vuitton’s style director of menswear, is never less than scientifically committed when researching his collections. Inspiration from trips to places like Chile or India regularly find their way into his work. What is less known about the designer is that he is an equally avid book-hound, with printed matter inciting his creativity as much as far-flung locales.

Among Jones' recent purchases are a catalogue by cult Japanese store LaForet Harajuku; multiple books on the illustrator Antonio Lopez; vintage issues of Wet, an avant-garde, bathing-themed publication from the 1970s; and a copy of Comme des Garçons 1975-1982, an exceedingly rare tome documenting the rise of Rei Kawakubo's iconic brand.

His source for all of these prized titles has been the same: Idea Books, the small book-selling enterprise founded by Angela Hill and David Owen, who have been dealing rare books and magazines for over fifteen years, stocked in Comme des Garçons’ Dover Street Market in London and quietly selling hard-to-find, new and out-of-print fashion, photography, design and architecture titles, by appointment, from their Brewer Street offices in London’s Soho. 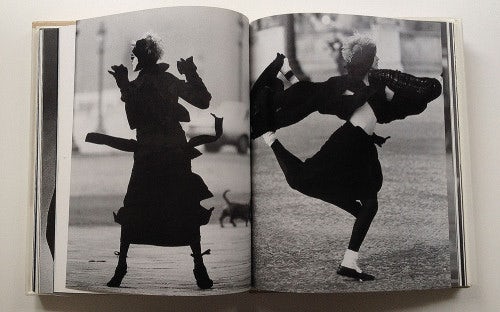 Knowledgeable to a fault and blessed with enviable sourcing connections, the duo have built a reputation as an indispensable resource among designers, stylists and other fashion creatives, including Bruce Weber, Joe McKenna, Nicolas Ghesquière and Clare Waight Keller, who described Idea Books as “an addiction.”

Now, the book seller is launching its first foray into the American market with a small shop-in-shop at Dover Street Market New York, set to open today with the most exhaustive collection of publications about Comme des Garçons ever assembled. “At DSM, we always choose to work with people that have strong vision and an independent spirit,” said James Gilchrist, general manager of Dover Street Market New York. “Everything about Idea Books is special. I can’t think of any other book store in the world with such an amazingly edited collection of very rare fashion, art and design books."

Idea Books' New York debut comes on the heels of a boom in the company’s growth, notable for having being driven largely by Instagram, where Idea Books has attracted close to 64,000 followers. While turnover has roughly doubled since Idea Books opened its first pop-up store (at London’s St. Martins Lane Hotel in 2010), sales have increased by 25 percent since the bookseller started using the photo-sharing service to market its wares. “We were very lucky that Instagram came along and that we exploited it the way we did,” said Owen.

Owen puts up six books on Instagram every day, posting three catchy images per title. The images are accompanied by witty captions — a few lighthearted lines creating a sense of urgency and capturing and enhancing the desirability of the books — followed by what has become a tagline of sorts: “Email if you want@idea-books.com.” No prices are given. 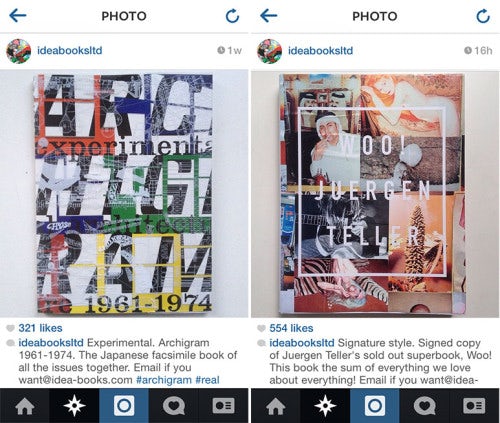 "Intrinsically, Instagram is the perfect medium for our business. It's a constant stream of pictures. It naturally suits the super-visually literate and the time-poor, who happen to be our best customers. It just helps people who would be our customers anyway, but who are much better customers thanks to this platform,” said Owen.

"I follow [Idea Books] via Instagram as it's fast and visual and I can judge quite quickly if it's interesting for what I might be looking for. There is something very personal and creative about their selection that can't be found at other booksellers. But what really separates them are the wonderful descriptions and anecdotes about each book; it makes it into an experience," said Waight Keller.

"I love Instagram and have purchased a few items I've seen on their Instagram, but you always have to be quick as they go fast!" added Jones, who has been an Idea Books client for about 8 years.

But, on closer inspection, Instagram has simply been a catalyst for what has been an unconventional and forward-thinking approach all along. While Idea Books is nominally based in London, the bookseller's real home is online. Indeed, Key to Hill and Owen's success was their early decision to eschew a traditional store in favour of a model rooted in e-commerce, shop-in-shops and personal service. Customers can shop at the company’s small office, staffed by four people. But the vast majority of sales are generated online and at the Idea Books space at Dover Street Market London.

“What I really like about them is you can ask them to search and they find everything pretty quickly,” said Jones. “They understand what I want and know my interests, and the magazine collections they get always impress me.”