LONDON, United Kingdom — BoF can exclusively reveal that, today, directional fashion retailer LN-CC will relaunch its store and website, having been bought out of bankruptcy and rebooted by Milan-based e-commerce specialist The Level Group, which powers the online businesses of brands like Galliano, Stuart Weitzman, Costume National and others.

Launched in 2010, LN-CC (which stands for Late Night Chameleon Café) made its name as a fashion-forward risk-taker, known for directional buys driven by the venture’s respected co-founder John Skelton, who trained as a buyer at Selfridges, Harrods and Oki-ni and favoured a unique retail mix that combined the likes of Rick Owens and Lanvin with young London labels and Tokyo streetwear brands.

The business is thought to have generated about 80 percent of its sales online, with its physical store (a 5,000-square-foot, appointment-only space set in a former boxing gym in London’s Dalston, also home to the studios of JW Anderson and Christopher Kane) functioning primarily as a kind of brand temple, complete with a spacecraft-like interior designed by Gary Card, a carefully curated ambient soundtrack and heavy incense.

LN-CC got off to an impressive start. But after three years of double-digit growth, with creativity in abundance and business management skills in short supply, the retailer ran into trouble. According to Skelton, the business was growing by 100 percent year-on-year, but cash flow became a major issue. By 2013, things became so bad that the retailer failed to pay many of its designers. The previous year, LN-CC had raised £2 million to fund expansion and on the back of 2012 sales revenue of £5.5 million (about $9.2 million), forecast £7 million in 2013 turnover — but fell far short, tipping into bankruptcy. “We just didn’t have the business back-up,” said Skelton.

Enter The Level Group. In early 2014, the firm pulled LN-CC out of administration, re-formed the business as a new legal entity and installed John Skelton as creative director. (Of LN-CC’s five founders, only Skelton remains. The new company is wholly owned by The Level Group).

So what did The Level Group see in LN-CC? And what’s different this time around?

According to Andrea Ciccoli, co-founder and CEO of The Level Group, LN-CC’s greatest asset was its “strong identity,” something other fashion retailers struggle to establish, particularly online. “We’ve seen the volume game being played out — which is what online is still all about these days — and, now, the niches are coming up,” Ciccoli told BoF. “Of course, the focus is on creating the department store, creating the distribution centre, but I think going forward there is going to be much more attention on identity.”

But a strong identity without a solid business strategy is not enough and, according to Ciccoli, LN-CC in its previous incarnation failed to “do the boring stuff” — payment systems, logistical infrastructure, customer service, online marketing. Since taking over the business, The Level Group has overhauled the LN-CC website, applying basic best practices in a bid to boost conversion rates, and shifted logistics to Italy, where the company already operates a large distribution centre and can take advantage of its scale. “In doing that, we gained 20 percent of operational costs on the commerce side. What’s most important is not being forced to sustain substantial costs because you are below minimum scale,” explained Cristian Musardo, co-founder of The Level Group and CEO of LN-CC. The retailer also plans to ramp up its online marketing activities, “being faster, more dynamic; creating content, putting it on all channels and marketing across the globe,” added Musardo, who is based in Milan but spends two to three days a week in London with the LN-CC team.

But what really differentiates LN-CC from other fashion retailers is the unique composition of its buys and, today, the LN-CC store and website are set to re-open with a product mix that still very much reflects John Skelton’s instinctive and risk-taking approach.

“He is the fastest buyer on the planet,” laughed Musardo. “What we put on the table was taking the risk out of the operational side and the technology side and leaving the risks where they should be, in the creativity,” he continued. Current season merchandise includes a wide range of labels, from blockbuster brand Saint Laurent to Capara, a young directional label designed by Sarajevo-born, German-bred and Belgium-trained Vera and Olivera Capara, about whom Skelton is visibly enthused.

Importantly, the retail mix also includes a group of labels which Skelton characterised as “conscious” because, in some way, they incorporate sustainable practices into their work. These include Lunge, a German maker of sustainable running shoes, and Fanmail, a line of sustainable basics produced in Brooklyn. “This movement is not really about fashion. It’s more a movement of the world,” said Skelton. “I believe that that is the future of this industry. I think it will infiltrate itself into the bigger brands.”

Noticeably absent, however, are many of the brands that LN-CC championed in its first incarnation, but who stopped working with the business after it failed to pay them on time. LN-CC “lost a lot of collections” and that “impacted the offer in the short-term,” admitted Skelton, who says he has faced the company’s reputational issues openly and honestly. According to Ciccoli, all outstanding accounts have now been settled and the combination of LN-CC’s progressive brand and The Level Group’s operational expertise have convinced new partners, including Valentino and Marni, to come onboard. 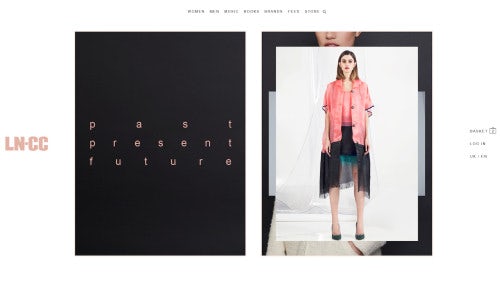 As for the new interiors of LN-CC’s Dalston store, set to host a launch party tonight, the look and feel remains very true to the original concept. The space-esque tunnel created by Gary Card has been faithfully preserved, though repainted in bright white and lit by LEDs. Grey carpeted walls form a tactile enclosure in a newly added room to the right of the entrance, while another more gallery-like space is inhabited by large, geometric wardrobes, housing collections from brands including Raf Simons. At the back of the store, the original event space has been fitted with a state of the art sound system that adjusts its volume based on the ambient sound level in the room, so the music is never too soft or too loud. Indeed, every last detail has been considered.

“It's about making a brand statement. It’s not like a commercial store. It’s not about sales,” explained Musardo, who said the company was considering opening a second store, probably in Asia, though the vast majority of LN-CC’s sales would continue to come from its website, the main focus of the business.

For some of LN-CC’s brand partners, however, being stocked by the retailer is less about sales and more about brand positioning and reaching the influential community the store attracts. “There is a revolution in the relationships we’re having with the brands,” said Musardo. “We’re not only a wholesale partner, but we are a marketing platform for brands.”

Currently, LN-CC is working on marketing-style initiatives with Paco Rabanne, Vionnet and Kolor, which, according to Musardo, could include events as well as online activations. Indeed, it is LN-CC’s potential to gather a valuable and authentic community that may, ultimately, hold the keys to its success.

“As soon as you put something out there that isn’t trying just to make money, something honest, that resonates with people,” said Skelton. “Fashion per se is so bland. It’s so controlled. We’ve always been good at just blowing that apart. I think that’s what resonated with people that first time around and I’m sure it’s what will resonate with them again.”