The gap between closures and openings on the British high street has widened to record levels, according to new analysis from PwC.

LONDON, United Kingdom — The future of UK retail is a cloudy one as more consumers shift to online shopping.

The British high street suffered 2,692 store closures in the first half of 2018, according to analysis of the UK's top 500 towns compiled by the Local Data Company for PricewaterhouseCoopers (PwC). In contrast, there were 1,569 store openings, a decline of a third year-on-year.

The findings equate to an overall net loss of 1,123 stores disappearing from the UK’s streets during this period. (In the same period a year prior, there were 2,564 store closures to 2,342 openings — an overall net loss of 222 stores.) “Openings simply aren’t replacing closures at a fast enough rate,” said Lisa Hooker, consumer markets leader at PwC.

10 percent of store closures were fashion retailers, making it the largest business category affected. According to PwC, 269 fashion stores closed in the first half of 2018, while 165 opened. 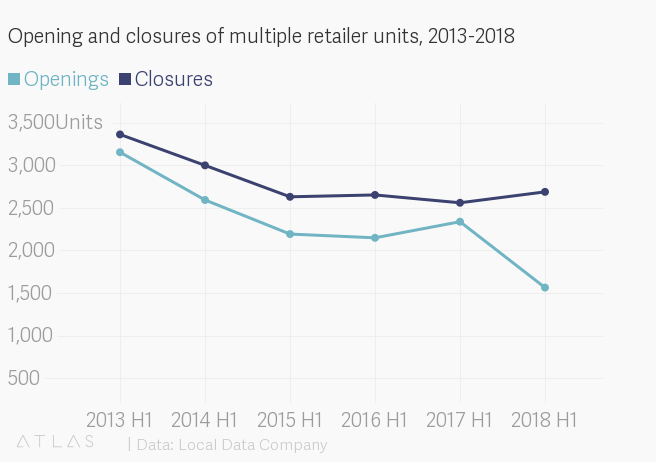 Hooker said that clothing retailers’ troubles reflected a shift in consumer preference for online shopping and at-home leisure, as well as a change in culture towards enjoying experiences rather than buying products. While the shift has resulted in an increase of “experiential” store openings such as beauty salons, it hasn’t been enough to offset the closures of more traditional businesses.

Looking ahead, the turmoil facing UK retail is unlikely to abate. “Store closures in the second half of 2018 due to administrations and company voluntary arrangements (CVAs) that have already been announced will further intensify the situation,” Hooker warned.

“While CVAs can be helpful restructuring tools, alone they are insufficient,” added Zelf Hussain, retail restructuring partner at PwC. Research of more than 101,710 companies listed on Companies House shows that of the 65 retailers entering into CVAs between 1987 and 2017, more than half (51 percent) failed, leading to another insolvency process.

The United States, meanwhile, is experiencing a “retail apocalypse” of its own. US mall vacancies hit a six-year high in the first quarter of 2018, according to data from real-estate firm CoStar Group, and more retail space could open up than any year before. (At least 94 million square feet of retail space closed in 2018, according to the latest data released in April, already moving in on 2017's record of 105 million square feet.)

However, there’s still opportunity for brick-and-mortar stores. Consulting firm McKinsey & Company estimates that some 80 percent of purchases are still expected to happen in stores in 2020, as shoppers still crave physical experiences. “The British high street is in urgent need of new ways of thinking and new forms of retail,” said Hooker. “Encouraging this should be a priority.”

If We Built the Retail Model From Scratch, What Would It Be?

Amid ‘Retail Apocalypse,’ The Future of Commerce Is Community