Can Black Designers Break Through with Key Retailers?

This season, Black designers are finding that buyers at sought-after stores are more eager to stock their brands, though many of the barriers that have kept Black-led labels from key retailers remain in place.

Can Black Designers Break Through with Key Retailers?

This season, Black designers are finding that buyers at sought-after stores are more eager to stock their brands, though many of the barriers that have kept Black-led labels from key retailers remain in place.

“All of a sudden, we saw an influx of new orders, new customers, people who had never seen our brand before, ordering and wanting to support Black designers,” said Shelly Powell, the designer’s sister and business partner.

Then, the retailers came calling. Goldson and Powell launched their brand in 2011 after the designer made it to the finals of Project Runway, the reality competition show. Shortly after, they inked a deal with Zappos to sell her ready-to-wear collection. But the Amazon-owned e-commerce site, which mainly sells footwear, was their only wholesale partnership to date, aside from a holiday capsule with Forty Five Ten last year.

This season, however, Kimberly Goldson is in talks with multiple retailers to carry its Spring 2021 collection. Powell credits Harlem’s Fashion Row, the organisation founded by Brandice Daniel that held a virtual market week in October for designers attended by Net-a-Porter, Nordstrom, Intermix and other retailers. Daniel’s group organised the week on NuOrder and paired designers with mentors who helped them price their products, plan deliveries and more through RAISE, a new network for professional development.

“It has reinvigorated our desire to establish retail partnerships,” Powell said. “If you don’t really have the connections you say, ‘Okay, that piece of the puzzle is not for us at this moment.’”

It is an opportunity for designers to leverage this momentum to forge these connections with retailers.

Kimberly Goldson is one of many primarily direct-to-consumer brands suddenly finding the doors cracked open at retailers where Black-led labels are few and far between. In many cases, the stores are responding to a growing consumer-led movement to support Black businesses and creatives as the industry grapples with the way racism thwarts the growth of Black professionals in fashion.

It won’t be clear to what extent retailers have embraced Black designers until February when stores start to roll out their spring offerings. Whether retailers can figure out how to sell these labels — and how their customers respond— is also unknown. But as the summer sales surge demonstrates, when Black designers are put in front of consumers, the demand often turns out to have been out there all along.

“Some things do still feel a bit performative, or checking off a box, because [retailers] are getting called out,” said James Flemons, designer and founder of the label Phlemuns, which he said has seen more growth in the last six months than in the previous seven years. He has a new pop-up shop open in Los Angeles’s Fred Segal and a growing relationship with Ssense as of February. “But, at the same time, I'm in a position where … why not take advantage of that,” he said.

Many Black designers are angling to land wholesale accounts at a time when multi-brand retail is in crisis. Designers of all backgrounds are rethinking their relationships with these stores, tired of unfavourable deal terms and last-minute cancellations. The pandemic and economic downturn haven’t helped. Department stores have closed stores and filed for bankruptcy.

Still, small businesses often rely on retailers for marketing and to expand their geographic reach. These relationships can help designers get access to funding, and big accounts generate enough volume to decrease manufacturing costs. For many Black designers, who as a group have historically had less access to funding and fewer industry connections, these benefits can be hard to resist.

“Most Black designers do have to sell their product direct-to-consumer because they aren't carried in department stores and they don't have their standalone stores,” said Antoine Gregory, a stylist who launched an online destination, Black Fashion Fair, to create opportunities for Black designers. “It all boils down to there not being enough representation in those rooms when decisions are being made.”

Even though consumers flooded Black-owned brands like Kimberly Goldson over the summer, the shift in the retail space has not been as swift. Designer Aurora James launched a non-profit campaign, The 15 Percent Pledge, in June to encourage retailers to commit to buying 15 percent of their products from Black-owned brands. In fashion, only Rent the Runway and Macy’s have signed on, as has American Vogue.

“It’s a lot of heavy work and emotional labour and tough, tough conversations,” James told BoF recently. “There’s a lot of shame in these numbers. There are people who can own where they are and commit to doing better and there are people who want to be defensive and explain how it won’t work.”

Other retailers are working on their own initiatives. Nordstrom has announced a goal to generate $500 million in retail sales from brands owned, operated or designed by Black and Latino people by 2025.

But many of the longstanding obstacles keeping Black designers from greater visibility in the wholesale market remain in place.

Access to funding is a core problem. Data from the US Federal Reserve showed Black-owned businesses are more than twice as likely to get turned down for loans, and even when approved they have a higher rate of not receiving full funding.

Salone Monet has directed her attention primarily on figuring out the complicated inventory issues of her footwear brand since she founded it in 2018. The label offers high-heels in six shades to match a darker range of skin tones than the traditional light beige nude that has dominated everything from ballerina tights to bandaids for decades. 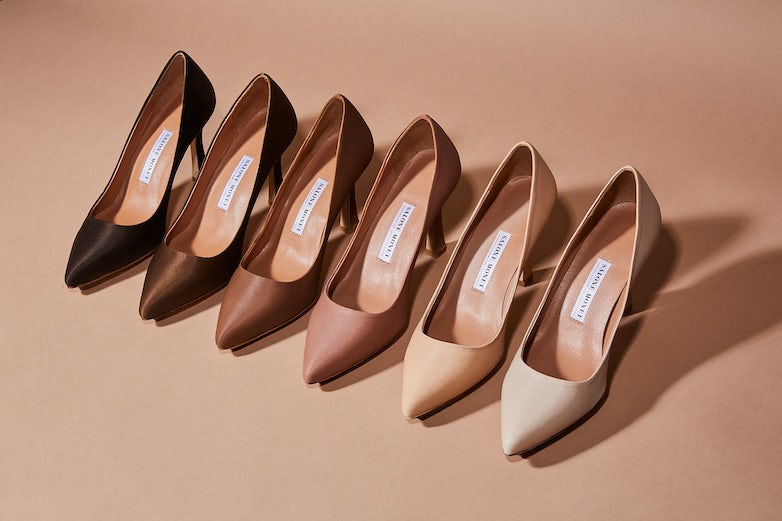 “My margins weren’t great and it wasn't something I could necessarily scale, but I got a lot of traction very early on,” Monet said, explaining how she filled an empty gap in the market for a mid-price, classic heel. Now that she simplified the production process (the shoes are dyed domestically after ordering to reduce inventory risk), Monet plans to expand her online inventory and hopes to partner with retailers on capsule collections of different silhouettes.

“If brands don’t funnel into one of those channels, it’s very difficult to get seen by a retailer,” Mathur said. Intermix participated in Harlem’s Fashion Row and RAISE-backed market week and is “in conversations” with some of the designers who participated. (Mathur is also an advisor for RAISE.)

And finally, another major barrier is the lack of representation of Black people in the industry as buyers and store owners. Throughout her career as a buyer, for example, Allyson Moore, a former sales executive for Versace and Roberto Cavalli who now operates the online boutique, The Curated Eye, has almost always been the only Black person in the room.

“I think that expansion of diversity across the board is really important in changing the retail presence, and the perception around brands and retail and wholesale and shopping,” said Flemons.

With any emerging designer, retailers worry about whether they’ll be able to deliver their collections on time, or will still be in business over the long term. Designers said this concern is amplified around Black designer labels, whether warranted or not.

“Because of the lack of funding and the lack of support for black designers, [retailers] are nervous to take the leap,” said Moore.

She said retailers need to give designers the time and support they need to succeed.

“Otherwise it will be a self-fulfilling prophecy of, ‘oh, of course, they didn't make it.’ But you didn't give them a chance,” she said.

Moore presented to buyers on behalf of the designers in the HFR and RAISE market week, and made sure to communicate these were mature businesses with established consumer followings.

“We are not asking you to take mediocre stuff just because it is Black-owned and it's now cool,” she said. “These are uber-talented people who are juggling 500 different things in order to make this a success.” 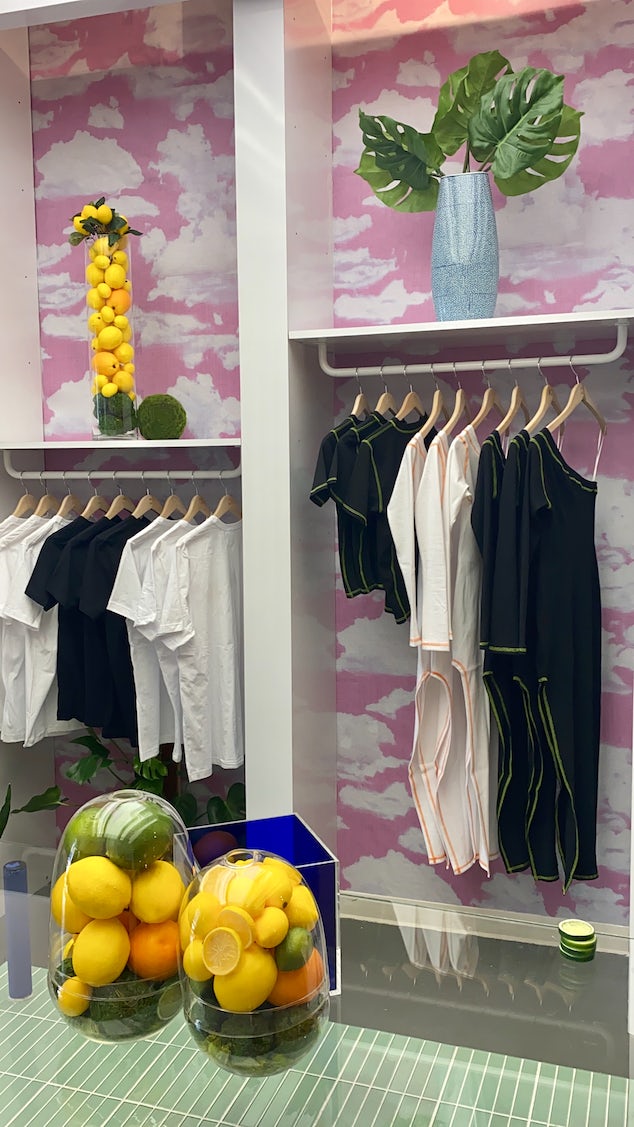 Intermix’s solution is to provide more mentorship and networking for the emerging designers it works with, even if it's just for a capsule collection or one-off project, said Mathur.

The project idea came out of Twitter thread Gregory started in 2016 after he saw the New York Fashion Week calendar lacked Black designer representation. He started listing designers, adding to it over the subsequent years.

“While the list was growing, there would be brands that were on there that no longer existed,” he said. “I was trying to figure out why that was … How do we go from just knowing them to supporting them?”

Gregory saw that Black designers needed more than just the kind of attention that comes from being listed in an article, which is why he added a retail component to his site that allows visitors to shop select pieces from each designer. After the pandemic, he also plans to host in-person trade and retail events.

Because of lack of connections and support, Flemons said, Black designers are also more likely to enter detrimental retail relationships, with unfavourable terms or conditions, that can hinder growth because they don’t have the industry connections for guidance.

Black designers must also fight the perception that only Black consumers will buy from their brands. Moore said she was sure to point out designers’ Instagram followings during her presentations to demonstrate potential demand.

That may be key to ensuring this summer’s momentum solidifies into real change. Struggling retailers are looking for culturally relevant and conversation-driving products to keep shoppers engaged.

Moore said many of the retailers she spoke to during Harlem’s Fashion Row and RAISE market week understood the push for more representation in retail brands and wanted to be a part of expanding it, telling her they wanted to meet more designers.

“We want to know, we want to learn,” they told her.

In her pitches, Moore emphasised each designer’s personal stories, which retailers can use as content on social media and their websites to market to consumers who want to support Black designers or founders with their purchases.

“We are in a moment in time where there's a lot of momentum behind this,” said Mathur. “It is an opportunity for designers to leverage this momentum to forge these connections with retailers … As soon as you have that relationship, you are empowered.”

Editor's Note: This article was updated on 13 October 2020. A previous version of this article misstated that Nordstrom set a goal of generating $50 million in retail sales from brands owned, operated or designed by Black and Latino people by 2025. The goal is $500 million in that time period.

How Fashion and Beauty Can Better Engage with Black Businesses