Can Nanushka Be More Than Just an Influencer Brand?

After finding fame on social media and building a thriving business via wholesale, the Budapest-based label sees opening its own stores as the next stage of its exponential growth.

Can Nanushka Be More Than Just an Influencer Brand?

After finding fame on social media and building a thriving business via wholesale, the Budapest-based label sees opening its own stores as the next stage of its exponential growth.

Just three years ago, the Budapest-based contemporary brand’s sales came mainly from boutiques in designer Sandra Sandor’s native Hungary. Today, the label has racks at top-tier retailers in the US, Europe and Asia. Sales are on track to hit $23.5 million this year, up from $1.6 million in 2016.

Sandor started Nanushka in 2006. But the version of the label favoured by jet-setting influencers and magazine editors was “born in the digital space” in more recent years, said Peter Baldaszti, Sandor’s longtime life partner, who she brought on as an investor and to serve as chief executive in 2016. Baldaszti also helped to secure further investment in the business.

Around the same time, Nanushka began to gain traction on Instagram as influencers discovered the brand’s simple feminine silhouettes. Baldaszti and Sandor also hired an in-house team to manage the sudden rush of orders from wholesale partners and via its own e-commerce operation.

Now, the brand is betting it’s a big enough name to build out stores of its own in key markets around the world, starting with a location in Manhattan’s Soho neighbourhood that opens Thursday. More outposts are planned for Los Angeles and London, with a goal of five locations by the end of 2020. Nanushka already operates a store in Budapest that opened in 2017.

“Most of our customers, especially the ones in New York and Los Angeles and London, they either know the brand from Instagram or they have crossed paths with us at major retailers,” Baldaszti said. “There’s no real relationship between the brand and the customer other than the garment itself, so [opening stores] is really important for us to solidify our presence in their lives.”

Inside, the new store is awash in beige, with leafy highlights from tall plants: a 3,300-square-foot millennial-approved open space with a cafe and lounge area. Baldaszti said the company plans to host monthly events, such as panel discussions. 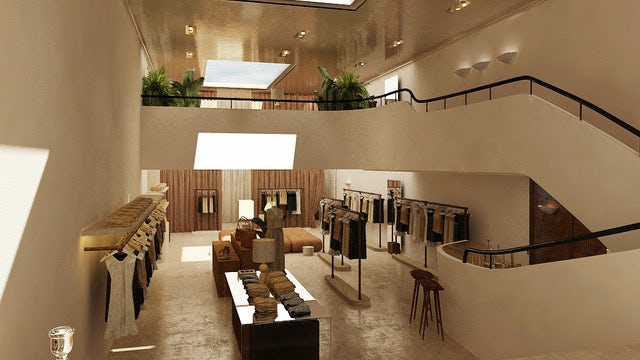 A rendering of inside the store on Wooster Street | Source: Courtesy

According to Sandor, the New York storefront presents a “clearer vision of functionality and practicality” compared to the Budapest flagship. “We’ve improved our art of editing.”

She added that each new store will share the same DNA but feature localised design.

Nanushka is one of a number of labels that are looking to parlay an immense following on social media into international retail success. Ganni, another brand adept at creating viral designs at entry-level luxury price points, also opened its first New York store earlier this year. Like Nanushka, Ganni was known mainly as a local Copenhagen label but has grown to an annual revenue of nearly $60 million today. But being an international fashion brand located outside of any fashion capitals comes with a unique set of challenges, including navigating the ebbs and flows of trends across vastly different markets.

Today, Nanushka already earns about 35 percent of its sales from the US, Baldaszti said, and is stocked by nearly 250 retailers worldwide, including Browns, Net-a-Porter, Nordstrom and Saks Fifth Avenue.

For Nanushka, its first store outside Hungary is meant to serve existing fans first, and bring in new customers second.

“Through a retail location you can obviously reach a different audience,” Baldaszti said. “But in New York first and foremost it’s about offering a new way to shop Nanushka for our base followers.”

The store will still build brand awareness, he added, in a way that will be mutually beneficial to its New York stockists as well, including the newly opened Nordstrom flagship just three miles north of Soho. Nanushka also unveiled a redesign of its logo on Wednesday, and will release an in-house travel-focused magazine as part of its new store opening.

The sustainability-focused brand, known for sleek vegan leather basics, was able to scale so quickly in the first place by investing in operations in-house. After Baldaszti took the reins in 2016, he built a 13-person team to manage wholesale accounts as well as an e-commerce team to grow online sales. Today, its direct-to-consumer offering makes up about a third of sales, but he hopes that share will grow to 50 percent in the next two years.

In conjunction with its new US stores, Nanushka plans to open a distribution centre in North America next year. “With our new system, we’ll be able to offer retail and online fulfilment and have a single view of customers as well as inventory,” Baldaszti said. And after that? Expansion into Asia, he added.

Case Study: How Ganni Turned a Local Label Into a Global Brand