Can SurfStitch Resuscitate the Surfwear Industry?

Shares of Billabong and Quiksilver, the surfwear industry's biggest labels, surged to records in 2007, then crashed. A young, ambitious player has hopes of reviving the salty dream.

HUNTINGTON BEACH, United States — If the surfwear business were a streaming soap opera, it would go like this.

Shares of Billabong and Quiksilver, the industry's biggest labels, surge to records in 2007, then crash. Gone are the days when high schools were flooded with bright graphic tees and baggy pants, and Matthew McConaughey could be seen catching a wave at Malibu Beach in knee-length board shorts. In 2011, Cali-cool surf seller PacSun begins closing down 200 stores. In 2015, Quiksilver slides into bankruptcy court.

Enter a young, ambitious player with hopes of reviving the salty dream. Australian retailer SurfStitch goes public in 2014 and quietly sets out on a rad acquisition spree, snapping up online retailers Swell and Surfdome, gear manufacturer Surf Hardware International, surf magazine Stab, forecasting service Magicseaweed, and sports video studio Garage Entertainment and Production. Suddenly, SurfStitch has global reach, revenue of A$145 million (US$109 million) in its latest fiscal half, and a grand vision — a $1 billion surf empire united next year as Swell.

Yet uncertainty hangs over SurfStitch like a massive wave. In a shock announcement, Chief Executive Officer Justin Cameron abruptly resigns from the company he founded with his surfing buddy Lex Pedersen in a terse e-mail. The Sydney Morning Heralddeclares that Cameron has "gone rogue." The company says he's talking to the money people about taking SurfStitch private. Pedersen is named co-CEO with another executive, Justin Stone. Through it all, the stock rebounds more than 20 percent.

"We feel like we're poised to somewhat help resuscitate the industry," Pedersen said in an interview before last Thursday's shakeup.

The audacious plan is to rebuild surfwear around surfers. Pedersen said mainstream brands had eroded the legitimacy of surf culture and that it's time to get back to the core community. Stab is geared to true fans interested in reading about an Australian who caught 152 waves in one seven-hour session. Magicseaweed is for surfers who need to check the webcams to see if their local beach is pumping. Frequent beachgoers will keep buying plenty of surfwear, the reasoning goes.

"It got mass-marketed and lost its cachet," said Hoda Mallone, a fashion consultant in Los Angeles, the epicenter of surfwear in the U.S. She agreed the labels had gotten too big and a laid-back counterculture had turned corporate. "Fatigue set in," she said.

Cameron and Pedersen hopped on the phone last month to discuss their plans for the company, and the old days when they still had time to surf. Both were in high spirits. "We haven't had two minutes of break yet," Cameron said. He meticulously went through his blueprint: combine SurfStitch's new-media properties with e-commerce, re-establishing surf's coolness. "We're seizing the moment here," Pedersen said.

Neither could be reached for additional comment after Cameron's departure. But there were already signs of turbulence. The company ditched its earnings forecast last month, opting for flexibility as it pushed into new content services like the video studio. Investors were spooked, and the stock dropped 40 percent to a one-year low. 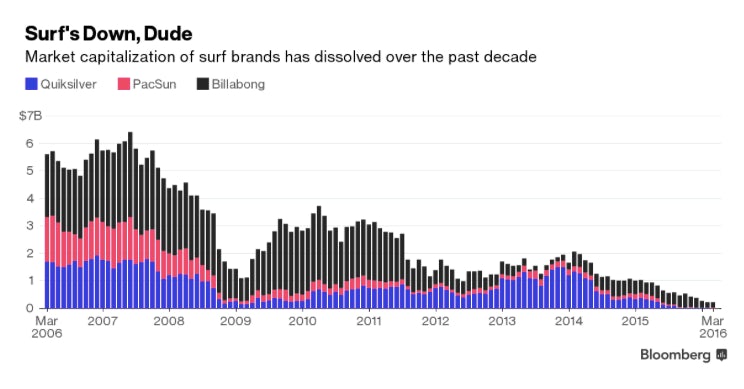 SurfStitch began as an eBay store run out of a garage near Sydney's northern beaches in 2008, just after what looks in hindsight like the peak of the surfwear trend. Cameron, a former analyst at Credit Suisse and Merrill Lynch, had the financial know-how. Pedersen brought the retail expertise from his days running Surfection, a chain of surf stores.

Within a year, SurfStitch had become a serious player in Australia. Billabong came calling, buying a 20 percent stake in 2009 and raising it to 51 percent three years later. The deal gave SurfStitch access to Billabong's many brands, and one less major competitor, helping the Australian company push into Europe.

As the craze over Cali and Aussie beach style faded, the mass-market surf companies imploded. Billabong decided to refocus its efforts on its core label in 2014, after an A$860 million loss the year before. SurfStitch's founders saw an opportunity to buy back their brand and expand. With a group of investors, they also bought Swell, Billabong's North American e-commerce site, then acquired Surfdome, Quiksilver's online operation in Europe. By the end of the year, SurfStitch had filed for an initial public offering of stock, raising A$86 million.

Cameron said in the interview he expects SurfStitch's businesses to hit A$300 million in revenue this year. Though that's much smaller than the billion-dollar kings of surf Billabong and Quiksilver, SurfStitch's market capitalization, at around A$380 million, has surpassed both of theirs. The company has about 600 employees and offices on five continents.

SurfStitch's retailers sell around 500 brands of men's and women's surfwear, from on-the-beach items like maxi dresses and rompers to actual surfer gear like wet suits and rash guards. Though they hawk all the big names (Billabong, Quiksilver, Hurley, O'Neill, Rip Curl), the stores carry hundreds of more obscure labels with little exposure outside surfer circles, such as Critical Slide and Freewaters. No brand makes up more than 5 percent of total sales.

SurfStitch still has to go up against a casual fashion trend that has abandoned surf. The rise of hip-hop in mainstream culture in the late 2000s led to the proliferation of street and urban wear, Mallone said. Stars like Kanye West and Beyonce became fashion influencers, and leggings, Nike kicks, and boyfriend shirts replaced the beach bum look. The ubiquity and sameness of surfwear undermined the free spirit it was supposed to stand for. Kids chucked their board shorts in favor of tighter, sleeker britches. College students traded their logo tees for simple V-necks and button-ups. Sandals made way for slip-on sneakers and boat shoes.

Surfing as a sport has also reverted to niche status. Attendance at the week-long annual U.S. Open of Surfing in Huntington Beach, California, is down 20 percent since 2012. World-famous surfers, such as competitive champ Kelly Slater and big-wave icon Laird Hamilton, are years removed from the spotlight. Change is afoot: The main professional surfing league and sanctioning body, the Association of Surfing Professionals, was sold in 2013 and rebranded as the World Surf League. Unsatisfied hosting events in far-flung surf spots with few viewers and attendees, the league now gets air time on a major network, ABC, and aims to win over the landlocked masses.

By buying up media enterprises like a magazine and a film studio, SurfStich hopes to embed the company in the sport, serving die-hard surfers and feeding them into Swell, the founders said. It aims to open a few large flagship locations over the next two years and is looking at "major surf destinations" around the world, rather than typical urban fashion centers like New York and Paris. It doesn't want a big fleet of stores, like Billabong's and Quiksilver's.

"We've got a busy year ahead as it is," said Cameron.