This week, Georgian designer Demna Gvasalia exited Vetements, the once-white-hot label he co-founded in Paris in 2014 with his brother Guram, who intends to continue the brand, despite its decline.

Vetements ignited a global craze for luxury streetwear, propelling Demna to the helm of Balenciaga, where he became creative director just six days after Gosha Rubchinskiy modelled Vetements’ infamous DHL t-shirt at the label’s third show, held in a kitschy Chinese restaurant and attended by the likes of Kanye West and Anna Wintour.

Vetements brought a grungy post-Soviet aesthetic and internet-baiting irony to high fashion with its oversized hoodies, wide-shouldered suiting, floral house dresses, recycled denim and novelty items like the DHL t-shirt. Its anti-establishment energy, post-modern sense of humour and obsession with logos and uniforms were intoxicating, a kind of fashion drug that hooked industry insiders, celebrities and consumers alike. It even sparked parody brand Vetememes.

But trends come and go, and Vetements has cooled significantly in recent years, weighed down in part by the growing feeling that Demna’s best designs were going to Balenciaga, whose products are less expensive on average and come with greater brand recognition.

In March 2018, Highsnobiety published a report entitled“2 Years After They Broke the Internet, It Looks Like Nobody is Buying Vetements,” citing an anonymous buyer at an independent North American retailer who said that “from a retail standpoint, Vetements is completely dead.” Guram Gvasalia, the label’s chief executive, declared the piece “fake news” but the hype that once surrounded the label had peaked.

Since then, some leading retailers have dropped Vetements, with others reporting mixed results. None would speak on the record, but social media buzz around the brand has fallen dramatically. According to Tribe Dynamics, a marketing technology company, Vetements’ earned media value (EMV), a measure of social media conversation, has dropped by more than sixty percent over the last year, from $17.9 million in the first half of 2018 to $7.1 million in the first half of 2019. 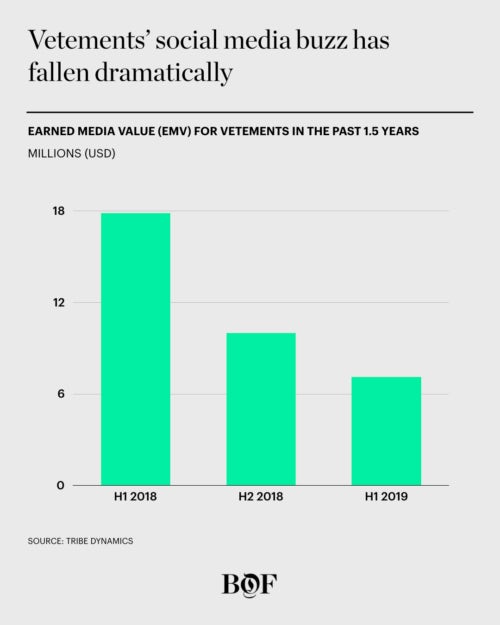 The decline of Vetements may not entirely explain Demna’s recent departure, however. Some insiders have suggested that Demna’s exit may have less to do with trouble at Vetements and more to do with the designer’s need to focus even more of his time and energy on Balenciaga, which is set to surpass €1 billion in revenue this year but carries a similar aesthetic signature to Vetements and may be susceptible to the same swing of fashion’s pendulum. Neither Demna nor Guram responded to multiple requests for comment.

But whatever the reason, can Vetements really continue without Demna?

Vetements was originally conceived as an anonymous, Margiela-style collective and Guram seems intent on continuing the label with or without his brother at the helm.

“Vetements has always been a collective of creative minds. We will continue to push the boundaries even further, respecting codes and the authentic values of the brand, and keep on supporting honest creativity and genuine talent,” Guram said to Women’s Wear Daily in a statement. “What Demna has accomplished over the past few years represents a key chapter in the story of Vetements. We are very grateful to Demna for having contributed to the great momentum of the house.”

But right from the beginning, Vetements was Demna’s creative brainchild: a project so personal that several dresses from his Spring/Summer 2016 collection referenced his grandmother’s rose-printed plastic tablecloths. And while Vetements’ subversive DNA certainly stands for something in the minds of consumers, it’s debatable whether it’s genuinely a “house” with codes established enough to sustain the brand over the long term without its original, creative mastermind.

According to one insider familiar with his thinking, Guram was once open to the idea of simply shutting Vetements down when the buzz inevitably faded, and launching something fresh, much as Gosha Rubchinskiy and his backer Comme des Garçons closed his skater-inflected fashion label while it was still cool and have begun experimenting with new projects.

The fact of the matter is: in a world where consumers crave constant newness and the hype cycle moves faster than ever, it is much harder to build a fashion house that lasts. Indeed, the natural lifespan of a label may be significantly shorter than in the past. As a result, designers and entrepreneurs may need to stop thinking of a single label as a reliable generator of long-term value and focus on birthing a stream of new projects instead.

So, Guram might be better off shutting Vetements down entirely and focus on leveraging his expertise and the power of his collective to birth something just as radically new and unexpected as Vetements was when it first rocked fashion, with the knowledge that it, too, may only last a few years before it is washed away by the next wave of the hype cycle. 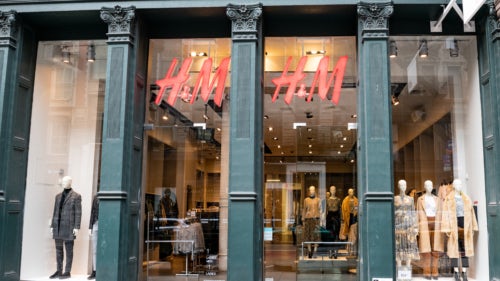 H&M sales growth slows. The Swedish retailer’s sales growth slowed to 6 percent in July and August, from 12 percent in June, hampering the company’s attempt to end a three-year slump in earnings. The shares then dropped as much as 3.2 percent. H&M has been trying to reduce its high inventory level, which stood at $4.2 billion at the end of June. The group will also test selling external brands and products at its H&M brand stores, marking a significant strategy shift and possible step toward competing directly with multi-brand online retailers such as Zalando and Asos.

Tiffany & Co plans more China stores as tourist spending falls. The jeweller is planning to open more stores in mainland China as the weak yuan deters Chinese consumers from spending overseas and they shift their luxury buying back home. Chief Executive Alessandro Bogliogo said currency fluctuations have had “an influence on the intention of Chinese to buy abroad,” but that mainland China sales had seen a big increase. Tiffany’s US sales to international travellers fell by more than 25 percent in the first quarter.

Walmart revives defunct fashion brand Scoop. In its quest to go upmarket, Walmart Inc has revived the defunct Scoop label and will position it as a private fashion brand. Walmart’s website and some stores will carry more than 100 items including tops, shoes and handbags priced from $15 to $65. The move is Walmart’s latest attempt to spiff up its dowdy fashion business, which delivers higher profit margins than food and everyday staples, but has never really caught fire. Meanwhile, Walmart likely discriminated against 178 female workers by paying less or denying promotions or both because of their gender, according to memos by the US Equal Employment Opportunity Commission.

Forever 21 in talks to give landlords a stake in bankruptcy. The ailing fast-fashion retailer is in discussions to give a stake in the company to its two largest landlords — Simon Property Group Inc and Brookfield Property Partners LP — as part of a restructuring that would allow co-founder Do Won Chang to retain a share. The proposal would be part of a bankruptcy filing, but the negotiations are ongoing and could end without a deal. Los Angeles-based Forever 21 is preparing to file for bankruptcy as soon as this month, ideally, with a restructuring plan in place.

JC Penney’s first female CEO makes strides with her turnaround plan. Jill Soltau is making a long-shot bid at JC Penney to do what her predecessors couldn’t: uncover what customers really want from the ailing department-store chain. Soltau joined the company last October with the stock in a free fall that has yet to reverse. Within the first six months of her tenure, she identified 18 of the department-store locations for closure, exited the major appliance business and moved most furniture sales to online only. With foot traffic falling and four straight quarterly declines in same-store sales, Soltau acknowledges she has a lot of work ahead. 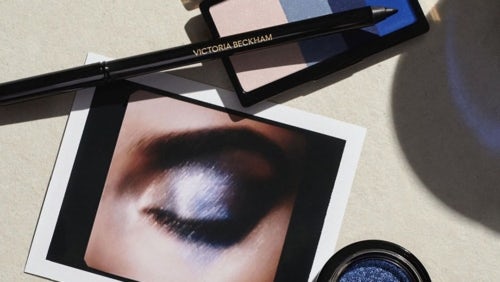 Victoria Beckham’s beauty line is here. Having announced plans for Victoria Beckham Beauty back in February, the designer's direct-to-consumer line has now launched with an 11-piece smoky eye collection. Beckham has worked with co-founder Sarah Creal to find experts in clean and cruelty-free formulations for the makeup line and insisted upon consciously designed packaging. The digitally native brand is being sold exclusively through VictoriaBeckham.com and backed by NEO Investment Partners.

Benefit Cosmetics names CEO. The beauty company has hired Christie Fleischer as its new chief executive. Fleischer joins the company from Netflix, where she was head of global consumer products. She will report to Chris de Lapuente, chairman and chief executive of LVMH’s perfumes and cosmetics division, and replaces Jean-André Rougeot, who was tapped to lead LVMH stablemate Sephora in early 2019. 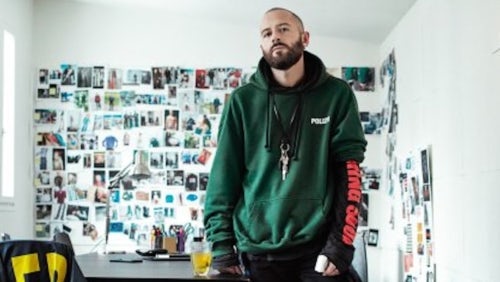 Demna Gvasalia exits Vetements, marking the end of a fashion cycle. The Georgian designer has stepped down from Vetements, the once-white-hot luxury streetwear label he co-founded in Paris in 2014. Gvasalia will remain the creative director of Balenciaga. Vetements is expected to continue without Gvasalia. Vetements first made waves in March 2015, when Gvasalia and his collective showed their collection at the Paris sex club Le Depot. The label was where Gvasalia made his name before becoming creative director of Balenciaga, and made him the poster child for the rise of luxury streetwear.

Toby Bateman exiting Mr Porter amid talent exodus at Yoox Net-a-Porter. Mr Porter’s long-time managing director is the most recent leader to leave the Richemont-owned group, which has experienced a string of senior departures, according to multiple sources. The well-regarded executive joined the group’s luxury menswear site as its buying director when it launched in 2010 and was promoted to managing director in 2015. Bateman’s next move is unknown.

Amazon vows to be carbon neutral by 2040. Chief Executive Jeff Bezos on Thursday committed the company to being carbon neutral by 2040 and said part of that pledge is an order for 100,000 electric delivery vans from a start-up the online retailer has invested in. Cutting emissions is a challenging goal for Amazon, which delivers 10 billion items a year and has a massive transportation footprint. Bezos announced a number of actions at a press conference in Washington ahead of Climate Week in New York next week, including that Amazon will meet the goals of the Paris climate accord 10 years ahead of schedule.

Alibaba leads investment in Taiwanese augmented reality start-up. The Chinese internet giant is leading a new round of funding in augmented-reality start-up Perfect Corp, in its biggest bet so far in Taiwan. Alibaba will use Perfect Corp’s YouCam virtual try-on technology, which allows users to see what makeup would look like on their faces before buying, when selling products like lipstick and eyeliner on its Taobao and Tmall online shopping platforms. The partnership will help Perfect Corp form relationships with global brands and access the beauty market in China.

Shopify starts US CBD platform. The Ottawa-based company is introducing new features for US retailers of hemp and CBD, expanding its cannabis e-commerce platform south of the border. Shopify plans to offer tools including online store design, payment, shipping and marketing in more than 40 states to merchants of hemp-derived cannabidiol, which was legalised in December and is found in everything from skin creams to snacks. Shopify’s platform is already widely used for online sales of recreational cannabis in Canada, where the drug was legalized 11 months ago.