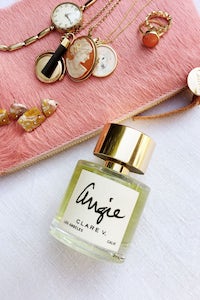 LOS ANGELES, United States — Designer Clare Vivier is about to add another “Made in LA” category to her accessories-cum-lifestyle label: fragrance.

Retailing for $144, “Angie” marks the brand’s first foray into beauty. Like the majority of other Clare V. products — from the signature zip foldover clutch to its “Vive La Resistance” tee — the fragrance will be manufactured in the region. Vivier worked with a local nose — Capsule Parfumerie's Linda Sivrican, who is based in Los Angeles — to formulate the scent, which has notes of Hinoki cypress, geranium and French green citrus and is inspired by cities where she has lived, from Paris to San Francisco to LA.

Angie (Vivier’s childhood nickname) will be available through the label’s e-commerce site and its seven directly owned stores across the US. “Fragrance is something I’ve wanted to make for a long time,” Vivier tells BoF. “Perfume is a natural extension for us because it’s something a woman likes to buy to treat herself and make herself feel a certain way, just like a bag.”

Niche fragrance is also a rapidly-growing category — one that has added nearly a quarter of a billion dollars to the fragrance market in the past three years, according to NPD. “The beauty realm is a behemoth industry right now,” she says. “I think it will bring us some new [customers] who are maybe beauty aficionados but may not be aware of our accessories collection.”

It’s no surprise then, that the launch has been strategically timed to coincide with the forthcoming holiday season, prime gifting time for fragrance. “We have a very eager audience at this time of year,” says Vivier. “Category expansion is important and necessary as long as it’s authentic to our brand.”

To be sure, Clare V. has come a long way since its founding in 2008, when Vivier launched her first bag, conceived as a chic yet practical alternative to the unstylish laptop sleeves available at the time. (The idea came after Vivier — a former journalist — had been unable to find one.) Today, handbags in brightly hued leathers — often embroidered or rendered in candy-coloured stripes — remain crucial to the business. Vivier has also done a good job of capturing the romantic interplay between Paris and Los Angeles to communicate her brand’s ethos, using her directly owned retail to experiment with different categories, from wallpaper to jewellery and sneakers. By 2015, annual revenues surpassed $10 million.

Dallas-based private equity firm Bedrock acquired a minority stake in the company in 2012 for an undisclosed amount, which has allowed for further expansion into the physical realm, although Vivier says that the brand has been cash-flow positive since launch. “No further funds were needed for this expansion into perfume,” Vivier says.

Vivier will look to develop the Angie category further and will introduce more product lines to the range. “We’re working on an Angie candle right now, which we’re excited to launch and build out our offering,” says Vivier. “We do really well with third party candles in store and on our site, so we are eager to develop our own. We're open to the idea [of further developing the beauty line], but we will test the waters first and see how we fare," she says.