With a new team in place, the Dallas-based retailer plans to woo young, local consumers to its Hudson Yards store by mixing luxury standbys with unexpected labels, home goods and vintage. But can it make it in Manhattan, where the competition is both fierce and familiar?

NEW YORK, United States — Over the past few years, independent luxury retailers across the US have staged something of a comeback, buoyed by Farfetch-fueled e-commerce sales and benefiting from the decline of top department stores.

Indie retailers are not immune to discounting or changing consumer behaviour, but they often employ top salespeople who serve as personal shoppers to major clients, building decades-long relationships that continue to flourish in the era of “me me me,” when attention is the most valuable service of all. Unlike the country’s major department stores, which have dozens of locations to contend with, these micro-chains can be more flexible and nuanced in their approaches, maintaining a certain personality and flair that goes a long way when choices are endless.

But while plenty are taking advantage of the windfall by expanding their footprint — from the Webster in Miami, which also operates stores in New York, Houston and Costa Mesa, to New York’s Kirna Zabête, which has branched out to East Hampton, Palm Beach and Bryn Mawr, Pennsylvania — none has explicitly targeted the Millennial generation, the oldest of which are now in their late thirties and have more expendable income. (By 2025, Millennials and Generation Z will represent about 55 percent of the market for personal luxury goods — 45 percent of which will be Millennials — according to Bain.)

Enter Forty Five Ten, the Dallas-based multi-brand retailer that has served the city’s ladies who lunch and boardroom since 2000, when it was founded by Brian Bolke and Shelly Musselman, who passed away in 2011.

Over the past 20 years, the retailer has earned outsize status globally as an important player in the luxury retail landscape. “Bolke and [Musselman] built their reputation through their editing, the best of the best, price be damned,” wrote BoF's Tim Blanks in 2016.

Now, the retailer is testing out that reputation in the most competitive shopping city in the world, New York, at its latest shrine to commerce: the Shops at Hudson Yards, the $2 billion retail venture that’s part of a $25 billion, 28-acre mixed-use property on a once-barren patch on the west side of Manhattan that’s being developed by Related Cos. and Oxford Properties Group.

But Forty Five Ten looks very different than it did even a year ago, following the exit of Bolke and the introduction of president and chief creative officer Kristen Cole, who will face competitors both old and new within the development, including Bolke, who is opening his very own concept, called the Conservatory, nearby.

In 2014, Bolke sold the store to Headington Companies, a private oil and gas firm led by billionaire Tim Headington. Over the past two decades, Headington has spread his fortunes into other areas, producing films and spending over $500 million working to redevelop downtown Dallas, where he opened the Joule Hotel in 2008. Headington’s real estate projects are led by Michael Tregoning, who has been with the company since 1997. 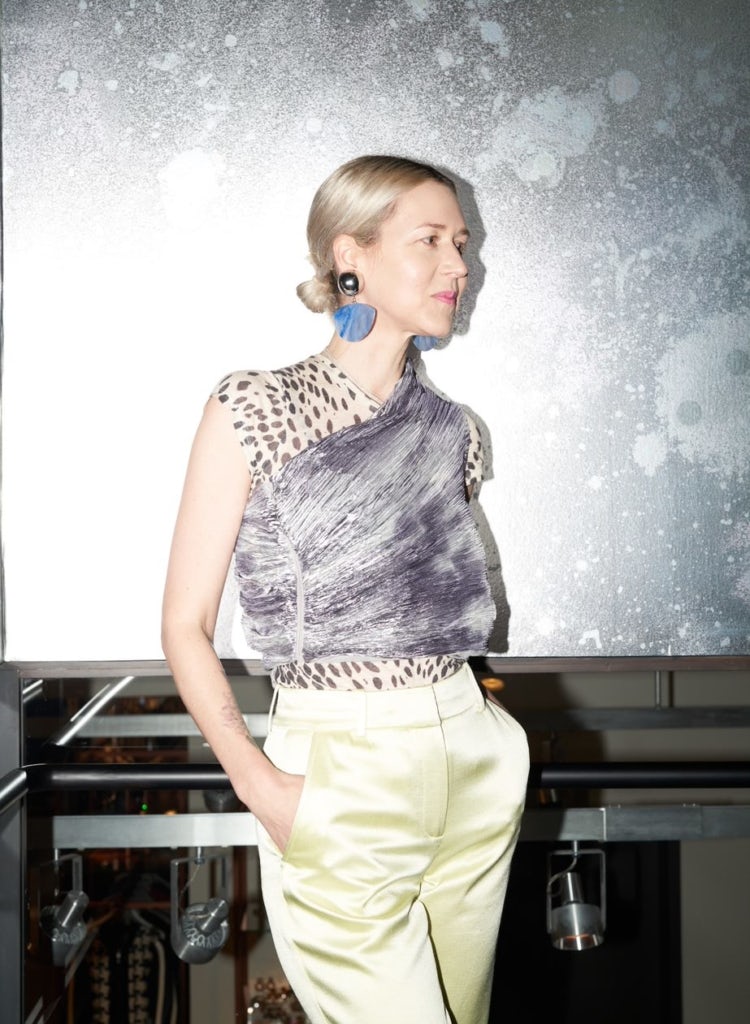 At first, Bolke stayed on at Forty Five Ten, hiring fashion industry insiders Taylor Tomasi Hill and Nick Wooster and opening a new location downtown as well as spots in Houston and Napa Valley. But he exited in August 2017, leaving room for Cole — whose own concept store, the Los Angeles-based Tenoversix — had been acquired by Headington Companies. (Both Tomasi Hill and Wooster have exited those roles.)

Cole’s connections to Headington go further than that. Her husband, Joe Cole, is senior vice president of retail and hospitality for the group. But here’s what’s important now: Cole oversees all of Forty Five Ten.

While Tenoversix’s Los Angeles store closed in 2017, its Miami and Dallas outposts have been rebranded as 4510/SIX, unifying Cole’s original penchant for emerging fashion, home goods and accessories labels with Forty Five Ten’s pure designer offering. Her goal has been to keep Forty Five Ten’s loyal customers loyal by offering fabulous fashion supplied by their personal shoppers, and attracting an additional audience by proposing something new.

“I’m really trying to create an overarching lifestyle, full-service retail experience that feels layered and can serve different clients,” Cole said. “There’s art, design and fashion in one place, but at the same time, I wanted to bring a smaller, lo-fi approach to the vibe.”

Forty Five Ten’s Houston store closed in 2018, with Tregoning citing several complications, but essentially boiling it down to the fact that the storefront was restrictive and the lease was up. But its expansion plans have not slowed. Along with the three stores open in Dallas, there’s one in Miami, Napa Valley and now an Aspen location, which popped up in November 2018. (These are places that many of the retailer’s Dallas clients frequently visit .)

“We’re not really interested in doing anything that isn’t distinguishable; our goal is not to open a whole bunch of stores with a consistency that yields ultimately to a beige approach,” Tregoning said. “Having more than one store isn’t necessarily a must-have, but it expands the reach of the brand.”

This March, Cole faces her greatest challenge yet: four individual, albeit connected Forty Five Ten stores at Hudson Yards, where she will not only face Neiman Marcus — its most direct competitor, given that both hail from Dallas and operate across the street from one another in that city — but also Bolke, whose Conservatory concept shakes the traditional wholesale model up by acting as a showroom. Instead of holding inventory, clients can go try on samples from Narciso Rodriguez or Victoria Beckham and order directly from the designer via the store.

Tregoning said that he had the chance to weigh in on whether the Conservatory should be able to open in the development. (Bolke was still at Forty Five Ten when the company began discussion with Hudson Yards.) Cole urged Tregoning to play nice. “We’re friends with Brian, and we’re happy to share the space,” he said. “[Hudson Yards] is a very audacious project and unlike a lot of other potential locations that we’ve seen, we’ve been given a lot of latitude to express ourselves in a very cool way and in a way that would distinguish us from the other tenants.”

To be sure, Cole’s vision of Forty Five Ten is removed enough from Bolke’s that she may indeed not be deterred. The adjacency to Neiman Marcus can only help with foot traffic. And Cole believes that her particular mix of product, which is meant to appeal not only to tourists but also locals who work in fashion and the arts, will help to distinguish the store.

The four spaces, designed in collaboration with her husband, are unified by a glass-brick storefront created in partnership with famous firm Snarkitecture and embellished with fine art, a key tenet of Forty Five Ten in both its new and old iteration. (Headington is a major art collector in a city of many.) In the women’s store, which will feature brands including Marc Jacobs, Marni and Rosie Assoulin, there’s a Jose Davila sculpture. Works by Al Freeman will sit in the men’s store, stocked with Jil Sander, Thom Browne and Visvim.

The third boutique, anchored by a Lars Fisk sculpture, is all vintage curated by a group of specialised collectors, with key pieces including a Halston leopard-print slip dress and an Yves Saint Laurent black taffeta ball skirt, not to mention Christian Dior costume jewellery from the John Galliano era and Chanel quilted leather pouches.

Finally, 4510/SIX, an homage to Cole’s original concept and a showcase for emerging designers, will include pieces from Sandy Liang, Batsheva, Jacquemus, Molly Goddard and Maryam Nassir Zadeh as well as home goods from ceramist B Zippy, furniture maker Bower Studio and others.

Besides the specificity of the brand mix, Cole hopes her flavour of hospitality will create goodwill in New York, where she says shopping over the years has left her feeling a little flat. “We have a cool staff,” she said. “It’s all about being respectful, cool and informative.”

Whether that’s enough to get people shopping remains to be seen. The fact that Hudson Yards is even opening is a strange and foreign feeling to New Yorkers who have been anticipating its arrival for years. And many of the luxury retailers who have opened in the city recently, from Nordstrom’s men’s store uptown to Barneys’ Chelsea location — have not seen the foot traffic that was perhaps once expected. (Barneys has denied this in the past and has said its Chelsea location has met expectations.) In December, Saks Fifth Avenue closed its women’s location in Brookfield Place, another major development that caters to executives working in the financial district. (However, its men’s store nearby remains open.)

But it’s undeniable that Hudson Yards, with its world-class restaurants, high-low retail mix, art installations and proximity to the Highline, an elevated park, is a unique proposition. If it succeeds here, Forty Five Ten could be the Millennial Generation’s answer to Barneys New York, which was once the go-to for the unexpected and is now more in line with its department-store competitors in terms of product mix and sensibility.

Given Forty Five Ten’s ambitions, perhaps it’s not surprising that Tregoning and Cole are already thinking about where they might open a store next. Los Angeles, a magnet for Millennials, could be answer.