Most women only wear maternity clothing for a few months, so are unwilling to invest in fashion when pregnant. Could rental businesses offer a solution?

Most women only wear maternity clothing for a few months, so are unwilling to invest in fashion when pregnant. Could rental businesses offer a solution?

LONDON, United Kingdom — “Completely fed up. Almost 21wks [sic] and have bugger all to wear,” wrote mummytobejuly2014. “I just want to find some clothes that make me feel nice.”

The forums of Mumsnet, a website where parents can chat and exchange advice, are awash with comments from angry pregnant women. "Maternity wear is generally hideous, three sizes too big or small, or impractically cut," complained HumptyDumptyBumpty. According to other Mums-to-be, pregnancy clothing collections are so bad they "made me want to cry," and “over priced tat — if I was being kind about them."

The US market for maternity fashion is small, valued at $2.4 billion, and grew an anaemic 0.7 percent from 2009 to 2014, according to research firm Ibis World. In the UK, maternitywear accounted for less than 1 percent of the women’s clothing sector and comprised £141 million (almost $212.4 million) in sales in 2013, a modest increase from £140 million (nearly $210.9 million) in 2009, according to Mintel. This, despite a rising birth rate and an increase in older mothers, who are more likely to have a larger disposable income and jobs that require a professional pregnancy wardrobe.

However, in the last few years, a flurry of start-ups have hit upon a more innovative solution: rentals. Online businesses such as Mine for Nine, Hire Expectations, Rent Maternity Wear and Borrow for Your Bump have launched, which enable women to rent maternity clothing for days to months at a time, for a fraction of the retail cost. They arrive on the back of an “access versus ownership” consumer trend, in which Uber, Spotify, Netflix and Rent The Runway have reinvented the way we consume cars, music, films and fashion.

“More and more people are realising that that’s how we will consume in the future. People are comfortable wearing things one, twice, and then moving on,” says Rakesh Tondon, founder of online clothing rental service Le Tote, which launched maternitywear earlier this year. 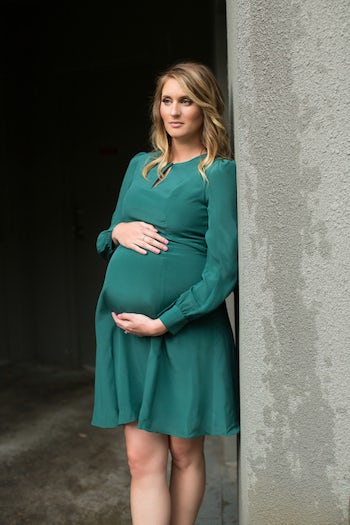 Maternitywear from Borrow For Your Bump | Source: Courtesy

Traditionally, maternity fashion has been a tough business proposition. The customer base is very small — about 3.9 million babies are born in the US each year (compare that with the more than 159 million women that make up the US womenswear customer base) — and, in the US and UK, the average woman has 1.9 babies in her lifetime, meaning maternitywear brands have a small time window in which to target customers. Furthermore, many women are unwilling to invest in clothing that they will only wear for a few months.

“I think the better designers of maternity have had to move from their first love of maternity to a wider, more sustainable business model, which includes the everyday non-pregnant customer,” says Marcelle Costello, founder of maternitywear rentals business Rent Maternity Wear. “It’s very, very hard to do true quality long-term without having the other portion of the female market as a potential customer. The dollars do not add up.”

Indeed, Mothercare, the leader in the UK maternitywear market, ran at a £6.1 million ($9.2 million) loss in the UK last year, and, when it comes to specialist maternitywear brands, consumers are left with little choice. In the US, designer and retailer Destination Maternity accounts for almost 40 percent of maternity clothing sales. In the UK, there are a few specialists, such as Isabella Oliver, which secured £1.4 million in funding through Santander’s Breakthrough programme for businesses with a turnover of less than £25 million in 2013, and Jojo Maman Bébé, which projects revenues of £50 million ($75.3 million) for the current financial year.

On the high street, retailers like Topshop and H&M offer trend-led maternity ranges based on their mainline collections, though these are not available in all stores. Meanwhile, department stores including Bloomingdales have scaled back their maternity offering, and Net-a-Porter’s maternity section is comprised mostly of stretchy or loose non-maternity garments.

Faced with a lack of quality, fashion-forward options, many women downgrade from high-end brands during pregnancy. According to a study by Mintel, in the UK, mainly married women over 35 shop predominantly at Topshop and H&M during pregnancy, despite not being in these retailers’ usual younger, value-led demographic.

So, could rentals turn this around?

The first advantage rentals have over existing brands and stores is price. Most maternitywear rentals businesses charge around $40 to $100 per loan, depending on the duration and the garment, with eveningwear rentals stretching up to around $150. “Anything above that, people feel a bit anxious about paying,” says Nisha Shah, who founded maternity dress rental site Hire Expectations in 2012.

In particular, this value proposition works well for styles that would be expensive to purchase: at rentals businesses Hire Expectations and Mine for Nine, evening dresses are the most popular items. And from the businesses’ perspective, “The more times you can return it, the more money you make,” says Costello of Rent Maternity Wear, which is occasionwear focussed and rents out garments for up to two weeks.

Tondon, whose company Le Tote sends subscribing consumers rental boxes of everyday garments by brands such as French Connection and Kate Spade, agrees that the rental model has business advantages. “When we compare our margins to the Gaps and the J Crews of the world, our margins are much healthier than theirs,” he says. Each garment on Le Tote is rented out, on average, 15 to 17 times. Customers can keep the boxes for as long as they want, and also have the option to buy the garments at a discount. “It’s a very high utilisation that we get out of our inventory,” he adds.

But renting out fashion creates business challenges of its own. “Everyone says e-commerce is a very complex business,” says Tondon. “People place an order, you send them a box. In our case, we do that, but we have 99 percent of our boxes sent back to us and then we have to process it, clean it, quality check it and then send it back out to someone else.” At Le Tote’s California warehouse facility, this process — which includes 27 points of quality checks on each garment —takes 12 to 18 hours. At any one time, Le Tote’s warehouse holds 10 to 15 percent of its overall inventory; the rest is on loan to customers.

“It takes a lot to maintain a garment. And shipping is such a margin killer for us,” says Krystal Stubbendeck, founder of Borrow For Your Bump, which rents and sells maternity fashion online. “The margins are better on retail for us, just because there is such a cost that goes into items on the rental side of it.”

These rentals businesses are also victims of the general lack of maternity fashion on offer. “We’re dealing with the issue that there’s not a lot of vendors out there for us,” says Stubbendeck. This is particularly true of luxury fashion, a fact Stubbendeck puts down to designers’ concern around brand equity: on the one hand, rentals make their designs accessible to the average consumer; on the other, maternitywear is not considered a “glamorous” market. To overcome this, Borrow For Your Bump, which launched in 2012, combines true “maternity” garments with bump-friendly styles from regular brands.

Brand awareness is another problem. Rakesh Tondon planned to launch Le Tote as a pure play rental business for the maternity market, but changed tack: “From a branding perspective, if you start out as a maternity brand, it’s really tough to become mainstream,” says Tondon. Le Tote began as a mainstream fashion rentals service in 2012 and raised $12.5 million from investors including Andreessen Horowitz and Google Ventures, before launching maternitywear in October.

“If I’m honest, it’s not grown as quickly or organically as I’d like it to,” adds Nisha Shah of Hire Expectations, where the majority of sales come via customer recommendations, either on social media or through word of mouth. “People love the concept, they just don’t know it’s out there,” she adds.

Indeed, these businesses are all under five years old, operating on a relatively small scale — though some are growing fast. After launching a subscription box service in June 2014, Borrow For Your Bump doubled its business in four months; Mine for Nine has grown at a rate of 20 to 25 percent since it launched in 2011. Le Tote expects to ship $100 million worth of products by the end of the year, and predicts maternity will make up 20 to 30 percent of sales in 2016. All except Le Tote declined to provide revenues.

Over the next few years, revenue growth in the US maternity market will pick up from the current 0.7 percent to about 2.7 percent per year until 2019, according to Ibis World, as the sector shrugs off the effects of the recession, which limited young families’ discretionary income and put some couples off starting a family.

The high-profile pregnancy wardrobes of style icons like Kate Middleton and the Kardashians have also raised the expectations of mums-to-be, says Borrow For Your Bump’s Stubbendeck. “Kim Kardashian was having couture designers custom-make maternity garments for her. I think the fashion savvy consumer’s seeing this and thinking, ‘Why can’t I get access to this?’” she says. “There’s a huge opportunity to be the front player and lead the way in changing the maternity designer business.”