The designer lays out his plans to revive Derek Lam 10 Crosby with the backing of new owners, as he prepares to present his first collection since selling the company. 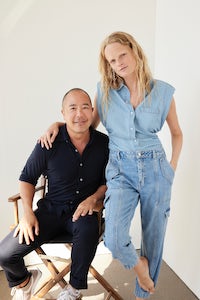 The designer lays out his plans to revive Derek Lam 10 Crosby with the backing of new owners, as he prepares to present his first collection since selling the company.

Derek Lam is about to reintroduce himself — and his brand.

While some familiarity is expected, a lot has changed — not just for Lam — but the entire American fashion industry.

Lam rose to prominence in the early 2000s as part of a wave of designers — among them Phillip Lim, Alexander Wang and Jason Wu — that emerged when e-commerce was first starting to catch fire, and traditional fashion media remained powerful. These designers were first met with excitement, which was quickly followed by an infusion of investor capital. That capital then guided them into a pressure cooker, as private equity and venture capital investments mandated growth on three-to-five-year profit timelines that proved difficult to meet.

“Fashion was very sexy and fun [to private equity], and way more fun than a cement company,” said Robert Burke, chief executive of fashion consulting firm Robert Burke Associates. The problems, he added, arose because investors “expected a return just like it was a cement company.”

This time, Lam said, will be different. With a new owner, he hopes they’ll not only be able to reinvigorate his line for today’s consumer, but do so in a way that will allow for sustainable growth. This new iteration of 10 Crosby — which initially launched in 2011, about a decade after his designer brand — will prioritise direct-to-consumer selling, along with select wholesale partners, and will also aim to develop a closer relationship to consumers by investing in its digital presence. To ease the financial burdens of scaling, the brand will use PCC’s resources, particularly in its supply chain, to launch new product lines — denim is first up — and come 2022, expand internationally.

“There’s always still work to be done, because we are talking about so many different levels,” said Lam. “[But] it’s nice to say we have ten years to look back on ... it’s a launching point into the future.”

“We found that the brand was much bigger than the business,” said Shamdasani.

Scaling will also be easier as 10 Crosby now has access to PCC’s platform, including its technical department, sourcing, and factories, consolidating its freight, shipping, and warehousing. With those logistical capabilities already in hand, the brand has been able to increase its number of retail partners by 50 percent for Spring 2022 versus 2019.

The denim line’s launch is an example of how PCC’s ownership will aid the brand. Because the infrastructure was in place, in just under four months, the brand was able to identify the market opportunity, dig through the archives to ideate, get the right fit, factories and fabric and start production swiftly. The hope is that agile approach can be applied to other new product lines in the future.

While wholesale will still play a role, in the wake of the pandemic, which forever altered buying habits, making consumers more comfortable buying directly from designers, DTC is the focus. However, unlike many other DTC apparel brands, 10 Crosby has built an identity and reputation over the past decade. Consumers know “it’s not just a flash in the pan,” said Lam.

Lam also wants this version of 10 Crosby to create a more personal connection with shoppers, and will focus on marketing the brand in a way the everyday consumer can engage with — think Instagram content and posters on the street. Gone are the days where Lam put on elaborate runway shows for small audiences.

Price wise, 10 Crosby sits in a sweet spot — it’s not fast fashion, but also not a designer brand selling $14,000 dresses, both of which Burke says consumers are more likely to spurn. The brand’s denim line will range from $295 to $395, and the Derek Lam 10 Crosby collection ranges from $195 for tops to $695 for outerwear.

“The customer had a chance to kind of rethink who they are, they have pent up demand, but they’re looking at the product differently, in the sense that they want pieces that feel of value to them,” said Burke. “The customer has become a lot more discerning.”

Changes across the industry mean Lam is refreshing the brand in a world that looks very different from the one he began it in — and even the one he sold it in a little over a year ago, before the pandemic took hold.

In recent years, the outlook for New York fashion has felt pessimistic. There’s an absence of incubators that exist elsewhere, thanks to Europe’s luxury conglomerates, and a slew of American retailers have shuttered or filed for bankruptcy. The American designers that have found success have oftentimes skipped town to show overseas or on their own schedule.

But Lam said the New York fashion scene might actually be healthier than ever, because nobody is trying to be a mega-brand or being touted as the next one, a shift from two decades ago, when investors were constantly in search of the next Ralph Lauren or Michael Kors.

“Do we need that?” asked Lam, adding, “There’s no support system in New York for that.”

Whereas American fashion used to be characterised by blind ambitions and growing in all directions at any cost in pursuit of high returns, success today is defined not only by the industry and investors, but by the beholder, according to both fashion journalist Susie Lau and Lam.

“The parameters of success have shifted, " said Lau, adding that may mean not going after every big retailer or into every new product category. “Everyone needs to concentrate on how they build their own channels and grow in a meaningful way.”

She pointed to Telfar, which built its brand through community without a lot of outside investment or pressure, as an example.

Though Lam is debuting the revamped 10 Crosby with ambitions for expansion in sight, his path to get there comes without a private equity exit timeline or the need for industry accolades and approval. And while PCC undoubtedly has growth expectations for 10 Crosby going forward, Lam is confident that given the company’s history, it understands the timeline necessary for fashion brands to see steady growth that they can maintain long-term.

Lam wants to create a brand that connects with its particular consumer in an effort to stand out among the ever-increasing number of upstarts and digitally-native contemporary brands bubbling up.

While Lam sees 10 Crosby as having broad enough appeal to keep it relevant in today’s marketplace, Lau wonders if the label’s aesthetic has shifted forward enough to keep up with where trend cycles and the plethora of emerging brands — like Ganni, with its precise, young, feminine approach — have landed the category. Whether Lam will be met with applause from consumers for his streamlined contemporary revamp will depend on whether 10 Crosby is able to differentiate its designs in a much-changed world.

“The contemporary category is very, very, very crowded. I think it takes either an image change, or an aesthetic change to pivot it to something that has that ability to make any noise,” said Lau.

Where Do Independent Fashion Brands Go From Here?