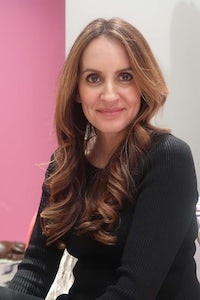 NEW YORK, United States — "Diane is the biggest asset to this business," Sandra Campos, the new chief executive of DVF, said shortly after the Wednesday announcement of her appointment. "She is iconic, and this is one of the most iconic brands."

The statement offers a sliver of insight into Campos' plans for DVF, which is in the midst of transformation after the December 2017 exit of chief creative officer Jonathan Saunders. He was replaced by DVF veteran Nathan Jenden, who rejoined the company in early 2018 as chief design officer and vice president.

Campos most recently served as co-president of women's apparel at Global Brands Group, overseeing brands including Juicy Couture, Bebe — where she worked with Jenden — as well as BCBG, Herve Leger and Tretorn. She arrives at DVF with extensive experience across e-commerce, retail, wholesale and international channels of distribution.

While Campos is technically filling the role left vacant by Paolo Riva, who departed in November 2016, Von Furstenberg insists she "wasn't really looking" for a new CEO. Instead, the founder has spent the last three months sketching a business plan for the future of DVF in hopes of selling an equity stake in the company. (In December 2017, it was reported that the brand hired investment banking firm Michel Dyens & Co. to explore a sale.)

Campos' working relationship with Jenden helped to inform the decision. "I told Sandra and Nathan that I want them to be the next Christopher Bailey and Angela Ahrendts," Von Furstenberg said. "I want them to stay together until they reach $1 billion [in sales]. I think it's an amazing team."

"Nathan is one most talented designers that I have ever come across," said Campos, who reports directly to Von Furstenberg and DVF’s board. "He's instinctive."

Von Fursternberg is betting that her new dynamic duo will be able to successfully use her own celebrity and following to the brand's advantage. After growing to an estimated $500 million in revenue in 2015, DVF has struggled against a waning wholesale model and the rise of social media-savvy direct-to-consumer labels, which are filching market share from the contemporary sector.

In order to be better positioned for future growth, DVF has worked over the past year to sell more goods direct-to-consumer. In 2017, 60 percent of revenue came from DVF stores — international franchise doors — and 40 percent from true wholesale doors.

"We shrunk a lot in order to be disruptive," Von Furstenberg said. "There are a lot of accounts that I don't sell to anymore. We cleaned up. Now, we're going to grow in a healthy way."

The appointments of Campos and Jenden, who was most recently installed at Bebe, a brand that caters to a much broader audience, suggest that DVF may be repositioning itself to go more mass as it seeks investment. Von Furstenberg said that's not the case, but that there will be an emphasis on expanding the digital footprint and building on the community already circling the DVF brand, underscored by events such as the DVF Awards.

"It's not a very huge company but it has global reach with iconic product, a vocabulary of print and an amazing emotional connection," Von Furstenberg said. "It's had that for years. Empowering women is something I've always done. It's not a marketing tool."

While the brand may not necessarily be going downmarket, Campos does believe that, in addition to global expansion, offering a wider range of prices across a broader range of categories — including casualwear and accessories — will help fuel growth.

"It's Day 1, but I do know that we have a very loyal and dedicated customer who is multigenerational," Campos said. "It's about maintaining our current customer base and expanding our current customer base." For instance, expanding the accessories range may help to attract younger entrants into the brand. "There are a lot of things that are untapped right now within this business," she said. "And a lot more opportunity from a product perspective."