Lessons from a Direct-to-Consumer Success Story

Dôen is in the rare position of having built a profitable business actually selling clothes. But the pandemic upended its production capabilities and ambitious goals for the year. BoF finds out what that means for the community-driven label.

Lessons from a Direct-to-Consumer Success Story

Dôen is in the rare position of having built a profitable business actually selling clothes. But the pandemic upended its production capabilities and ambitious goals for the year. BoF finds out what that means for the community-driven label.

LOS ANGELES, United States — Direct-to-consumer fashion brand Dôen has a problem most of its rivals would be happy to have in the middle of the worst retail slump in decades: demand for its soft floral blouses and billowy dresses is so strong, it can’t deliver them fast enough.

So this week, the label will take the unusual step of shutting down its website for a few days to respond to the growing number of customer inquiries about the status of their recent orders.

The timing is not ideal – August is when brands are usually racing to clear spring and summer inventory before their autumn collections arrive. But in a way, the shutdown is a necessary pitstop in Dôen’s rapid rise in a contemporary market many retail experts had written off long ago.

The space between fast fashion and luxury has been troublesome for years, undermined by challenged department stores and cannibalised by competitors on either end of the pricing spectrum. The pandemic may be the final blow for many of these brands, as sales plunge and department stores close.

Founders and sisters Margaret Kleveland (Chief Executive Officer) and Katherine Kleveland (Chief Creative Officer), started Dôen as an online brand in 2015, and now own the company with eight partners, many of who work in the business day-to-day. Their roomy, bohemian blouses and dresses quickly found a devoted audience of women who appreciated the vintage-inspired patterns and maternity-friendly designs. A 2019 sample sale in New York City attracted more than 5,000 people. 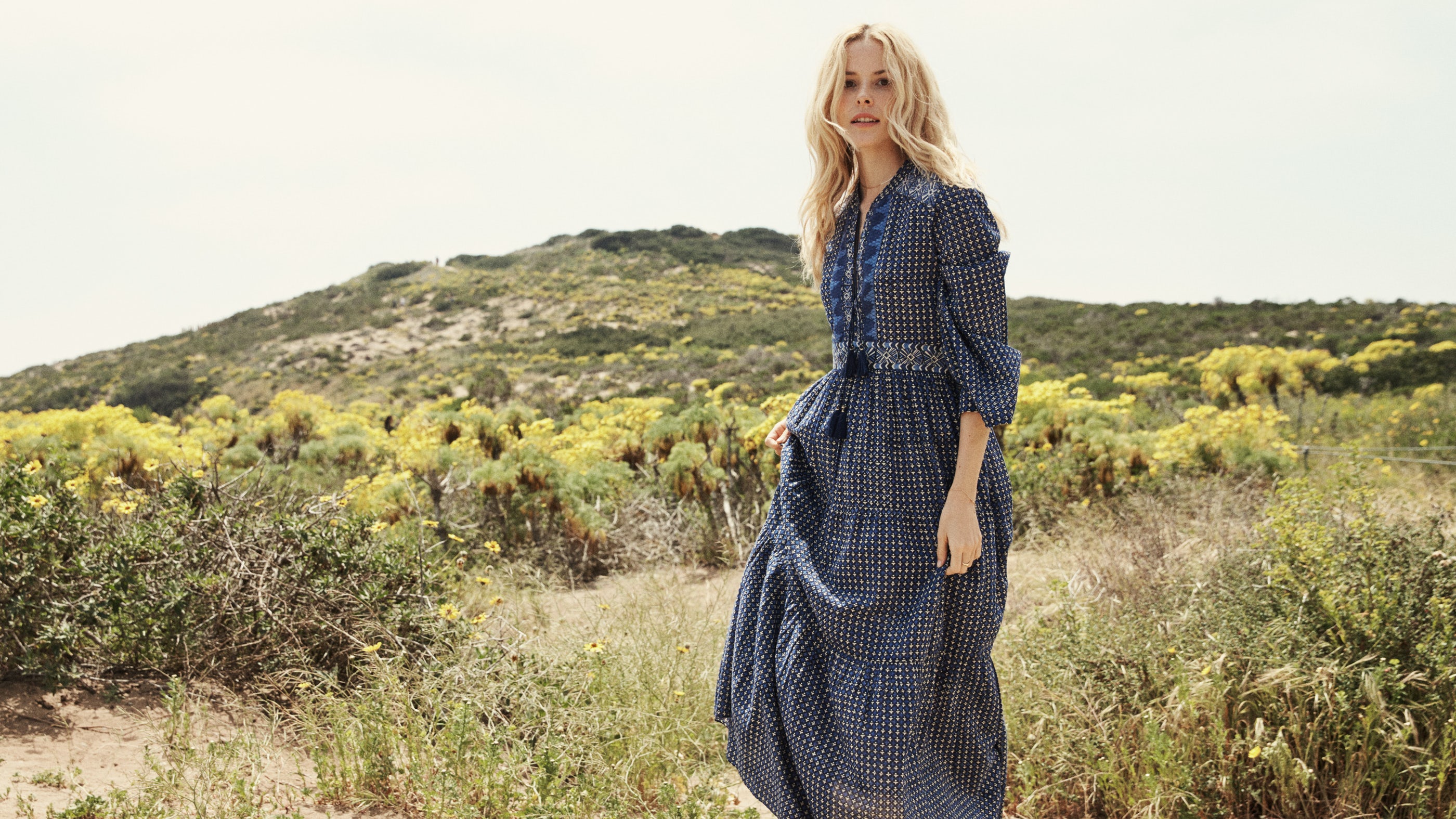 Last year marked a period of growth for Dôen, which opened its first store in Brentwood Country Mart, a popular shopping village and celebrity magnet — and expanded to 52 employees, up 62 percent in one year.

Coming into 2020, the company had more ambitious plans: move the growing team into a new, renovated office, install a new backend business software and hire more employees. These investments, complicated by the pandemic and a growing customer base, turned into challenges for Dôen in recent months as the brand faced manufacturing and shipping delays, and the switch to the new backend software proved more difficult than originally anticipated.

But these struggles are made more manageable by Dôen’s underlying business model. The brand is profitable since its launch and it is still projecting a sales growth of 23 percent this year (down from an original estimate of 61 percent, but still an aberration in a year during which the industry is expected to contract by as much as 35 percent). Dôen’s average order value has held steady at about $400 and about two-thirds of products sell at full price, also basically unchanged since before the pandemic.

“A lot of our strategy that has enabled us to be profitable relates back to not over-buying [inventory],” said Katherine. “We would rather take the risk of losing a few sales on something that sells out really fast than over-buy and just be playing the inventory game.”

How does a community-driven online fashion business keep to its longterm strategy while managing the extraordinary challenges of the pandemic? BoF spoke with the community-driven label about diversifying its supply chain, messaging through delays and avoiding widespread layoffs.

As the pandemic lockdowns took effect in March, Dôen closed its store and distribution centre (the store reopened in May and the distribution centre is operating at a reduced capacity). However, Margaret said the brand promised to pay employees at both locations through the end of May. Only two employees have been laid off, though salaries were cut company-wide in May.

Margaret said the brand was ultimately vindicated in its decision not to furlough or fire employees, as the team has been kept busy – to the point of feeling overworked – throughout the pandemic.

In mid-March, Dôen’s largest supplier in India shut down. Most of its summer collection, due to hit the site in April, was ready but did not manage to ship before the closures.

Many brands, including Gap and Levi’s, cancelled contracts with suppliers this year, anticipating they wouldn’t need new merchandise with so much sitting unsold in stores and warehouses. The Klevelands said they avoided cancellations and continued to pay their suppliers and manufacturers, which are also based in Brazil, Turkey, Portugal, Romania, Italy, Peru, and the US. (All had mandatory closures except the factories in Turkey and Portugal.)

“All of the initiatives on social media that were calling out brands that were not paying their suppliers were a big deal to our customer,” said Katherine.

Dôen’s suppliers eventually reopened their factories, but capacity remains at about 70 percent throughout its supply chain, and the brand expects to see production delays through mid-2021.

But with demand still strong, the reduced production capacity was a problem, so the Klevelands did something they said they’d never do because of concerns over working conditions: find a manufacturer in China, which at that point was ahead of other countries in containing the virus.

“We talked to a lot of our mentors and really took personal inventory and decided that it was worth it to keep everybody employed,” said Katherine. The Chinese factory they ended up working with is Worldwide Responsible Accredited Production (WRAP) certified, a vetting program established by the American Apparel and Footwear Association in 2000. 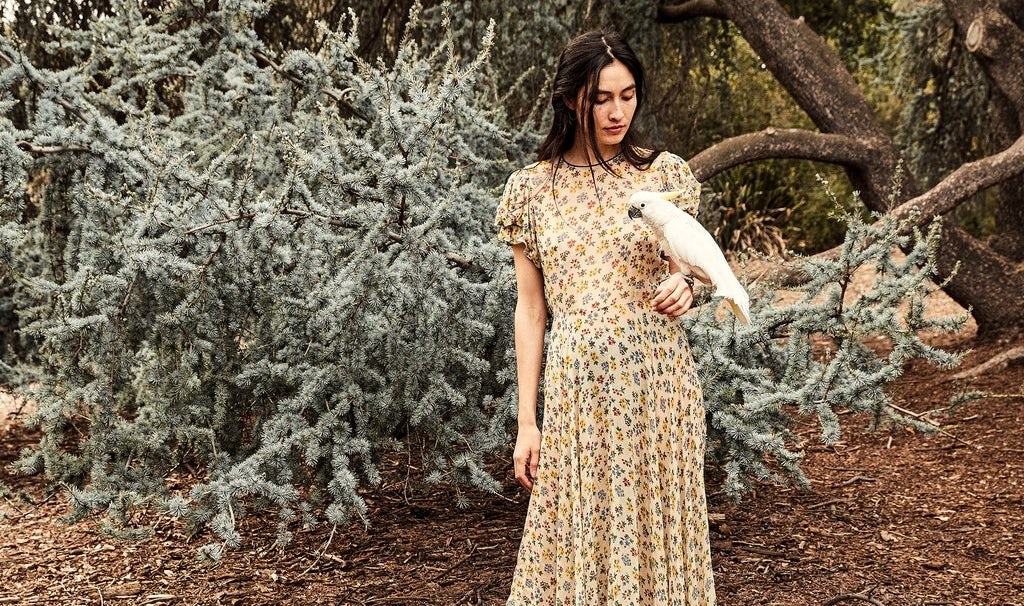 Find Multiple Ways to Talk to Customers Through Delays

The factory and distribution centre closures in March and April ended up causing delays of up to three weeks on pre-ordered items.

“Certain customers cancelled and that was totally fine and certain people were willing, just based on the amount of communication that we did, to wait,” said Margaret.

Throughout this period, Dôen pivoted its marketing approach, focusing less on products it couldn’t yet ship and more on conceptual messaging, such as images of artwork from artists like Cy Twombly and Georgia O’Keeffe and explanations of its relationship with factories.

“It really felt like ... the moment to open up and speak from personal experience and connect and be very clear what our business challenges were to the customer,” said Katherine. “The engagement was higher than ever.”

The brand said its page views increased 36 percent between March 15 through the end of June when compared to December through mid-March. The average newsletter open rate also increased 24 percent, and time spent on the website was up 7 percent.

Delays became a problem again in July, when the brand’s annual warehouse sale triggered an uptick in orders at the same time as it implemented the software upgrade, which was a bumpy transition for the Dôen team. Some orders that were already weeks late were delayed even further.

“There were definitely hiccups with it,” said Margaret. “Our strategy was really communicating again to customers fully, what's happening, and giving them the option [to cancel] and trying to make it right when we can, but it's definitely been a challenge.” The brand also offered discounts and free items to shoppers facing the longest delays.

The volume of customer queries about delays has reached a point that the brand decided to stop orders on its site for a few days this week to clear the messages ahead of new collection launches at the beginning of September.

“We needed to shut down our site for a week and just tell customers, ‘Our brand is going through this transition and we'll be back,’” Katherine said. “There are going to be people that are unhappy. And we have to be okay with that, too.”

Dôen got lucky in one respect heading into the pandemic: the summer collection already in production was heavy on nightgowns and sleepwear, just as many customers were getting used to spending more time at home. But taking into account continued delays and that its customers were likely not attending any formal events anytime soon (Dôen launched a bridal collection in 2019), the founders shifted the 2020 schedule in what Margaret described as “a big merchandising puzzle.”

With its factory in India, Dôen prioritised production of items where fabrics were already printed and in stock and easier to fulfil. Some pieces that were originally meant to be included in later summer deliveries moved to the autumn to reflect manufacturing delays, for example, while other more formal pieces were moved to spring 2021.

In May and June, after factories resumed operations, Dôen started releasing products in small groups, as opposed to its typical approach of showing an entire season at once. (Seasonal launch days drive the majority of Dôen’s sales, and more than 80 percent of shoppers who place an order on the first day are repeat customers.) By releasing products in smaller batches, the brand was able keep payments going to vendors and avoid cancelling the entire season.

“We said in order to be able to maintain payment to all of our vendors, we're going to launch a product as we receive it, I think that really did resonate [with shoppers],” said Margaret.

Set the Stage for Partners

Dôen is led by the Klevelands and ten female partners who have equity in the business, including several who work there full time. The founders have long felt uneasy about seeking funding from venture capital firms and private equity investors because their goals around explosive growth were “a diversion from what our company goals were,” said Margaret.

But that investing mindset is shifting, she said.

“Because I do think that there are now people identifying that that model is problematic, [and] the possibilities for us for the right partner are potentially more available now,” she said. But she and Katherine have more work to do before they bring in a new backer who could perhaps help the brand enter a new chapter in order to ensure the deal is worth it for them.

“I have very clear revenue and valuation parameters before it would make sense for us to share part of the business,” Margaret said. “We definitely want to build the company for a few more years.”