NEW YORK, United States — Forever 21 helped define teen retail at the start of the 2010s, introducing young consumers to a freedom of choice that only fast-fashion could provide. A decade later, the chain filed for Chapter 11 bankruptcy, after having failed to adapt to a new wave of brands that had once again changed the way teenagers shopped.

Forever 21 was never able to keep up with brands that applied its model of fast-fashion to social media-driven trends, where audiences are directed by algorithms and influencers on Instagram, VSCO or TikTok instead of the mall. Enormous stores in marquee locations like Times Square that at one point generated over $4 billion in annual sales are now bloated white elephants with unaffordable rent.

At the start of the decade, Forever 21 and other fast-fashion brands told teenagers what to buy. Now with social media and e-commerce, young consumers have the power to research and curate their own trends.

Back in 2010, the mall was still at the centre of retail. A Piper Jaffray survey of teens conducted that year — which included an entire section to Forever 21 — noted low interest in the “internet channel” among young women, who saw shopping as primarily a “mall-based, social event”.

America’s worst recession in decades had cleared space in malls for a new breed of fast-fashion brands, including Forever 21, Wet Seal and H&M. Collectively, these chains overpowered aspirational, logo-adorned incumbents like Abercrombie & Fitch, Hollister and American Eagle, which at that point had no answer for the sheer volume of cheap, trendy styles being pumped out by their new competitors.

But Gen Z was the first full generation to grow up on social media. The oldest members were 13 in 2010, and as they came of age over the past decade, they fundamentally reshaped consumer culture. This group of consumers will account for 40 percent of all global consumers by 2020, and drive $150 billion in spending power according to BoF and McKinsey and Company’s annual State of Fashion report.

Some of these brands are trying to slap a social mission on a brand that has never stood for anything.

Logos have returned. Streetwear brands have since brought back expensive branded hoodies and made exclusivity coveted among teens, producing an entire resale economy driven by young consumers that have become increasingly adept at researching trends and generating hype.

While brands like Brandy Melville and Dolls Kill are riding the new, social media-driven trends, Forever 21 and its cohort are in the same position as Abercrombie and Gap were a decade earlier.

“The retail landscape is littered with the carcasses of brands that couldn't reinvent themselves,” said Jason Stoffer, a partner at the investment firm Maveron, which has invested in brands like Dolls Kill, Everlane and Allbirds. “Some of these brands are trying to slap a social mission on a brand that has never stood for anything.”

Social media platforms have spawned their own consumer paradigms and brand associations: the homogeneity of users on the photo-sharing app VSCO, for instance, led to the infamous “VSCO girl,” a largely white, middle-class demographic of teen girls that became synonymous with Hydroflask water bottles, Brandy Melville clothes and Mario Bedasco facial mist.

Tiktok’s “E-girls” and “E-boys” have adopted a grunge aesthetic similar to teens that shopped at Hot Topic and used Tumblr or Myspace in the early 2000s. The new face of Celine, Noen Eubanks, is known for his e-boy style and rose to fame on TikTok.

Similarly, apps like Depop have created their own communities and influencers. The rise of these marketplaces, along with Grailed, StockX and Instagram, have shaped the way young consumers explore, curate and develop their style. 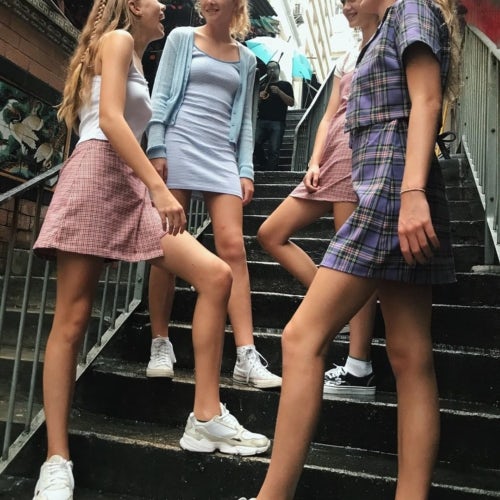 Gen Z is also more socially conscious than past generations, and, according to a recent report by Retail Zipline, 82 percent are more likely to buy from a brand that uses ethical business practises. Nine in 10 Gen Z consumers also believe brands have a responsibility to detail their beliefs on social and environmental issues, according to BoF and McKinsey’s 2019 State of Fashion report.

“Gen Z and Millenials can smell authenticity from a mile away,” Stoffer said. “If you stand for nothing they’re going to run and advertising isn’t going to be able to get them back.”

In a bid to appeal to any and all communities and subcultures, the mass-market brands and retailers of the 2000s and early 2010s ultimately failed to produce any overarching sense of brand aesthetic, value or connection that young consumers could identify with, something that’s become increasingly important in an ecosystem reliant on brands to create products with cultural value, however fleeting it may be.

Of course, many brands have also found success without negotiating with systemic racism or incorporating feminism into their marketing plans. Wet Seal and Forever 21 have been replaced with other popular teen fast-fashion retailers like Boohoo, Asos, Dolls Kill and Brandy Melville; the latter’s social media channels correspond aesthetically with earlier aspirational teen retailers like Hollister, with a shared affinity for thin blonde models frolicking in California. (Brandy Melville also infamously has only one-size for all products.)

For these brands, creating an authentic voice and persona online and offline can be equally as effective.

In the age of multi-hyphenates and brands-as-communities, teen retailers must not only sell and promote products across a wide variety of channels but also develop and adopt a brand persona complete with a distinct set of values, aesthetic and voice optimised for digital engagement.

It’s not only what users of platforms like VSCO are buying, but the set of values and social positioning they signal.

“They expect brands to have a distinct point of view and stand up for something,” said Hana Ben Shabat, founder of research and advisory firm Gen Z Planet. In Piper Jaffray’s most recent teen survey, environmental concerns topped the list of social issues respondents cared about.

Popular teen retailers at the beginning of the decade like Victoria’s Secret, American Apparel and Abercrombie & Fitch failed to respond to this shift in cultural values, clinging onto their respective brands commercial image of glamorous and hypersexualised homogeneity longer than they probably should have.

Former Abercrombie & Fitch CEO Mike Jeffries’ comments about the elitist nature of the company in 2006 — “Are we exclusionary? Absolutely.” — and the viral outrage that followed later signalled a shift in young consumers’ capacity to wield newly popularised social media channels as a means of holding brands accountable.

While the comments failed to generate a scandal when they were first reported, they resurfaced in 2013. Hashtags, petitions, Youtube videos, viral essays about body acceptance and a subsequently underwhelming apology on the brand’s social media account were produced; Abercrombie & Fitch soon announced it would offer larger sizes, and Jeffries stepped down a year later in 2014.

Following the controversy, Abercrombie & Fitch also edited its brand description in its quarterly statement; as reported by Buzzfeed, details of a brand “rooted in East Coast traditions and Ivy League heritage” that was the “essence of privilege and casual luxury” were removed from presentations.

In a statement to BoF after this story was published, Abercrombie & Fitch said the company had over the last five years worked “to evolve and ensure that inclusivity is integrated into all that we do across all our brands,” including updating hiring processes, size ranges, in-store experiences and marketing.

Victoria’s Secret has shuttered stores and cancelled its annual fashion show; American Apparel filed for bankruptcy in 2015; Abercrombie & Fitch is in the midst of a turnaround under CEO Fran Horowitz.

These brands failed to adopt voices that resonated with shifting cultural values. Even though Victoria’s Secret has since hired both trans and plus-sized models and Abercrombie & Fitch announced diversity initiatives, forging a new image that directly contradicts a decade of marketing and advertising is difficult when young consumers value transparency and authenticity.

Brands that espouse a sense of social and environmental consciousness to teens — Nike, and American Eagle’s Aerie — have capitalised on a set of cultural attitudes prone to generating outrage and praise across social media platforms.

Aerie’s #AerieReal campaign in 2014, for instance, didn’t retouch any of its models, instead opting to advertise body positivity and inclusivity while encouraging users to upload their own selfies with #AerieReal. The brand has become a key driver of sales for American Eagle and is in its 20th consecutive quarter of double-digit sales growth.

Nike has held the top spot for favourite apparel brand on Piper Jaffray’s teen survey for several years; the brand’s partnership with Colin Kapernick stoked controversy over social media, resulting in a sell-out of over 60 percent of the brand’s merchandise.

“[For young consumers], it’s not just about values,” said Gen Z Planet’s Shabat. “It’s about subscribing to a lifestyle.”

Five Lessons Teens Can Teach Us About the Future of Beauty