LONDON, United Kingdom — The rapid spread of coronavirus over the last month has hit the fashion industry like a gut punch, disrupting both supply and demand, and bringing retail sales to a grinding halt across large swathes of the global market.

Near-term, fashion’s top executives have a grim outlook. In a recent survey of over 400 business leaders within BoF’s community, nearly all said that the current crisis would hurt their business this year. Fifty percent of respondents said it would affect their operations “very negatively.”

And yet, two thirds had confidence in their company’s ability to withstand the shock and rebound when the current crisis eventually ends. Roughly a third were “very confident” in their longer-term outlook. 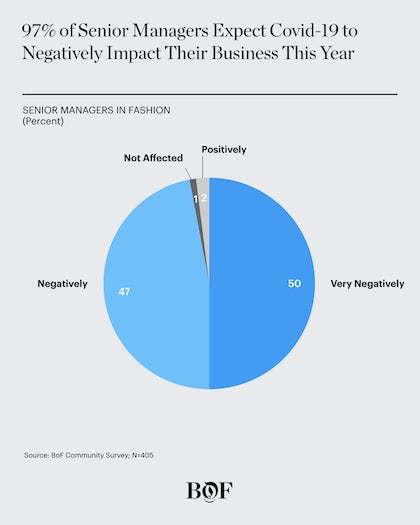 The virus, which had infected nearly 700,000 people and killed more than 30,000 as of March 30, according to the World Health Organisation, has caused a full-on global economic meltdown.

Over the last month, western markets have effectively closed for business. Retailers have boarded up stores and shuttered offices as governments put into place stringent isolation policies in an effort to contain the spread of the deadly virus. The impact on the fashion industry has been swift and savage.

Burberry has warned it expects comparable retail sales to be down 30 percent in the first quarter of the year, while LVMH has flagged a sales decline of between 10 and 20 percent. Neiman Marcus is reportedly in bankruptcy talks. Moody’s predicts department stores and apparel retailers will see operating income plunge up to 40 percent this year.

To weather the current downturn, companies are taking drastic measures. Nearly all of the respondents to BoF’s survey said that full-time hiring has come to a halt, while a third said they are also having to lay people off.

Last week, US retailer Nordstrom announced a slew of layoffs and salary cuts. Fast fashion giant H&M group said it is discussing temporary layoffs that will likely affect tens of thousands of employees globally, as well as considering more permanent measures. Macy’s plans to furlough most of its roughly 130,000 workers. 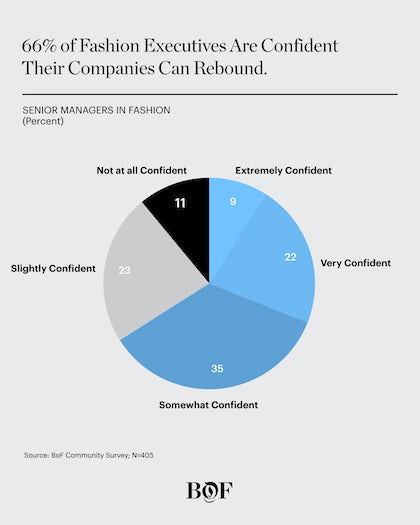 But as companies adjust to a new way of working and move from panic mode to problem-solving, the industry’s leaders are also looking to the future with hope. Many see an opportunity to reset, modernise the sector and address systemic issues that have plagued retail for years. Some are advocating an end to the slash-and-burn approach to discounts that have hurt many retailers over the last decades, while others are looking at opportunities to shift to more environmentally and socially responsible modes of working.