LONDON, United Kingdom —  As a manufacturer of highly technical and innovative interlinings (the thin layer of fabric that help garments keep their shape and structure), Chargeurs PCC relies heavily on trade shows like Première Vision Paris and Future Fabrics Expo in London. This year, it’s not planning on attending any, not even virtually.

“We don’t actually secure orders during trade shows,” said New York-based Angela Chan, president and managing director of Chargeurs PCC, in an email exchange with BoF. “[They’re] just a place for meetings and catching up.”

Trade shows were troubled even before the coronavirus crisis hit. They suffered from the decline of the high street as big-name retailers pulled back their budgets. The rise of a direct-to-consumer model and increasing digitisation also helped make biannual in-person events less and less compelling. According to a survey in BoF and McKinsey's State of Fashion 2020 report, 55 percent of brands and retailers saw trade shows as having little to no relevance to securing orders.

The pandemic has brought the industry to the brink. All US events in the business-to-business exhibition space were cancelled or postponed in the second quarter, according to the Center for Exhibition Industry Research (CEIR). September’s in-real-life iteration of Première Vision Paris, a biannual pilgrimage for textile sourcing, was cancelled at the last minute as the French government banned gatherings of more than 5,000 until the end of October because of a resurgence of Covid-19 cases in the country.

Like Chargeurs, many attendees see the shows’ value in the networking opportunities they present and the ability to physically showcase the tactile quality of products. Efforts to bolster their appeal with consumer-facing projects and conference-like panel discussions faltered even before the current crisis. To survive, the industry will have to modernise at pace and find new ways to entice customers in a financially uncertain and increasingly digital world.

"I believe trade shows will have to reinvent the way they are executed," Julie Gilhart, an industry veteran and brand consultant who formerly led the buying team at Barneys New York for 18 years. "In terms of their importance, trade shows that are well-curated, somewhat localised in the short term and can be a safe place for buyers to gather will be an attraction." 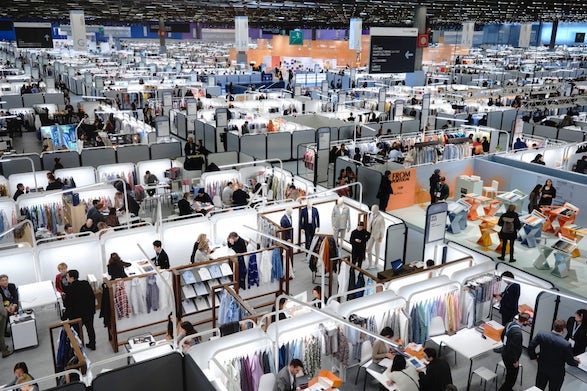 As large-scale events that rely on thousands of attendees and exhibitors to generate revenue, trade shows are particularly susceptible to new restrictions as governments grapple with fresh waves of coronavirus. While the pandemic continues to rage across the globe, their success relies on establishing flexible business models that can adapt in real-time to last-minute lockdowns and travel restrictions.

Première Vision has pivoted in a matter of weeks to a purely digital event. Like most trade shows, it invested heavily in digital over the last few months. Its online “marketplace” now allows buyers and vendors to make virtual appointments and attend some 20 online educational seminars. Almost 1,600 online shops will be available on the marketplace (roughly 80 percent of its usual September offering), which Première Vision is allowing its exhibitors to use for free — a loss-leader for the physical shows it hopes to return to in the future. (In 2019, Première Vision’s total revenue was €62 million.)

“Our business model is in having physical trade shows ... We feel our strategy is not to replace them,” said Gilles Lasbordes, Première Vision’s general manager. “Yes, it is a loss-making [season] … because we commit ourselves to our exhibitors.”

Some rivals are betting their digital offerings can generate cash until physical events are back on a more certain footing.

Pitti Immagine Uomo, the Florence-based trade show that has become a fixture on the menswear calendar, charges €2,500 per season for its customers to use its online platform Pitti Connect, compared to its usual average rate of €300 per square metre of venue space. Still cautious about returning to full-scale in-person events before the start of next year, Pitti brought forward the platform’s launch, originally slated for January 2021, to help navigate the crisis. Even so, virtual attendance is a fraction of the crowds Pitti usually drew with its in-person events: a total of 500 companies (from all of Pitti's trade shows), almost 6,000 buyers and 270 media professionals used the Pitti Connect service in its first four weeks, compared to the 1,200 exhibitors, more than 18,500 buyers and 1,900 press members that attended last summer's Pitti Uomo in July 2019.

Informa, one of the largest players in B2B exhibitions and events, is charging $1,995 to exhibitors across all its finished-product fashion trade shows to showcase their collections in its online marketplace. It’s not as lucrative as the group's physical events, which charge anything between $2,500 and upwards of $10,000 for a standard booth package, but it points to an opportunity for the future.

“In a post-Covid world, we want to be able to have our physical events again, with all the benefits that come with physical … complemented with the digital piece,” said Informa Markets Fashion President Nancy Walsh.

As the industry adjusts, there are already signs of a winner-takes-all economy emerging, with big players eyeing up acquisition targets.

In an increasingly competitive environment, companies with powerful stablemates that can draw from their networks and contacts, or double up on operating costs and digital investment may prove to be the winners.

If there’s a small event that has a strong loyal base, that is equity.

But equally, smaller trade shows with a strong sense of branding and point of view are assets to potential acquirers. “Organisations that are cash-rich … go shopping because there are properties or brands that are strong. They might be stressed because of the [economic] situation but they might be worth purchasing,” said Nancy Drapeau, vice president of research at CEIR. “If there’s a small event that has a strong loyal base, that is equity,”

For groups that own multiple trade shows in a similar space, the current pivot to virtual events is an opportunity to put all showrooms under one (virtual) roof and become a one-stop-shop for buyers, who are ultimately looking for breadth and convenience, said Drapeau. “If you can have events that share the same buyer base … you can put a stronger portfolio offering on the show floor, that can make for a stronger event.”

Informa, whose Informa Markets Fashion division includes a number of finished-product trade shows like Coterie, Magic and Micam Americas, has done just that. The group has launched an eight-week digital marketplace in partnership with NuOrder, where buyers can filter searches through product keywords or the names of the trade shows they typically frequent.

Brand Assembly, a business platform started in 2013 that now includes two trade shows, two co-working spaces and a back-of-office service for small and medium-sized businesses, is no stranger to a diversified business model, but trade shows were its biggest source of revenue. Pre-Covid, the company’s multi-city trade shows made up between 60 and 70 percent of total annual revenue. Now, “it’s going to dip below 50 percent,” said Co-Founder and Chief Executive Hillary France. 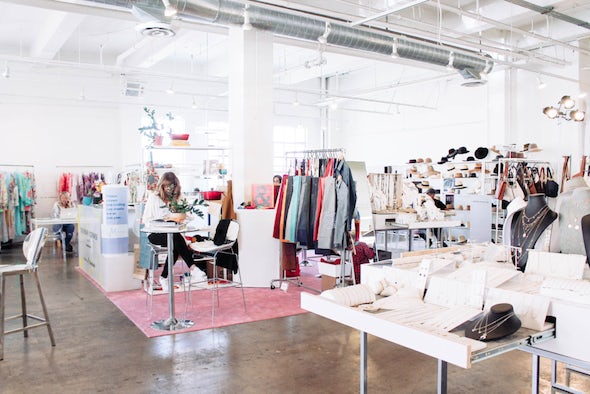 To mitigate for cancelled trade shows in June, Brand Assembly teamed up with e-commerce firm Alkeon to launch virtual marketplaces for established contemporary brands and emerging designers, which are free to use — for now.

“As we’re seeing how people use the platform, we’re formulating the pricing structure,” said France. As some brands — and even buyers — move away from the strict cadence of fashion seasons, France said she is leaning towards a software-as-a-service model where customers pay a monthly or annual subscription fee to showcase their products year-round.

Most within the industry are betting on a hybrid future, where the biggest physical shows retain their allure for networking and sampling purposes, but digital services amplify the offering with comprehensive analytics. Attendees, they believe, still want to try before they buy. “At least 70 percent of our buyers [said] they want to transact in person. They want to feel, they want to see, they don’t know what a weight of a fabric is going to be just from looking at a picture,” said France.

As trade shows face an uphill struggle to prove their value, they are looking to cash in on the currency of the 21st century: data. Big investments in in-house (or heavily customised white-label) online platforms are likely to continue, with companies hoping they can entice customers with smart insights on what buyers are looking for and more customised experiences.

“Doing digital events, compared to physical, is not as lucrative, but it does lead to Informa’s strategy of becoming very data-rich,” said Walsh. “With a physical event, 20,000 people come through the door. But it's very hard to ... follow where those 20,000 people go once the door is open.”