LONDON, United Kingdom — Balenciaga has stolen Gucci’s crown to become the hottest brand in fashion. According to the latest data analysed by BoF in partnership with search platform Lyst — which tracks 4.5 million data points per hour from over 65 million annual consumers, five million products and 12,000 brands — the Demna Gvasalia-designed brand climbed two places to top the hottest brand ranking in the third quarter of 2017.

Gucci dropped one place, coming in second this quarter, but continues to excel as the most consistent performer in the hottest brand ranking to date this year. Between July and September, the label launched Gucci Décor — an eclectic line of home furnishings and treatments — and announced its collaboration with Dapper Dan, driving brand searches across the e-commerce sites Lyst aggregates.

But the real success story this quarter is the impressive ascent of Virgil Abloh’s Off-White, which jumped 31 places to become the third-hottest fashion brand in the world in Q3, knocking Kanye West’s Yeezy — which ranked number two last quarter — out of the top 10. 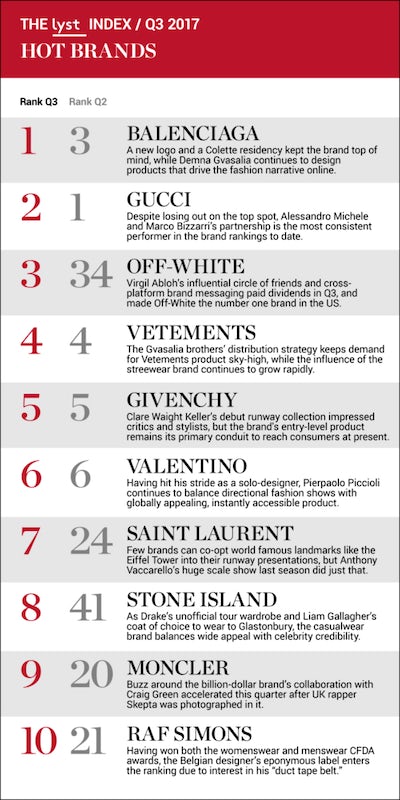 Abloh, part of a new guard of fashion designers who are elevating streetwear through high-end production and brand positioning, has a notable talent for cross-platform messaging, be it as DJ Flat-White, directing a music video for popular US rapper Lil Uzi Vert, or through his collaboration with Ikea.

Although Off-White is well suited to Millennial and Gen-Z consumers’ internet-driven dress codes, which happily mix high and low price points as well as disparate aesthetic and cultural influences, some industry critics find fault in the brand’s referential nature. Nevertheless, its commercial traction is undeniable; last year Abloh told BoF his business experienced triple-digit growth year on year between 2013 and 2016.

Consumer engagement with Abloh’s brand grew significantly in the third quarter. In July, Off-White partnered with optical disruptor Warby Parker on a line of sunglasses, and in September Abloh paid sartorial homage to Princess Diana during the brand’s Spring/Summer 2018 show, which was closed by Naomi Campbell wearing white cycling shorts and garnered significant press attention. However, the brand’s biggest driver of engagement by far was Abloh’s collaboration with Nike, which saw him reimagine 10 models from its archive including the Air Jordan 1, Air Max 90, Blazer, Hyperdunk and Air Force 1. Over the period from July to September, page views of Off-White products across Lyst’s partner sites increased by 184 percent, while searches increased by 63 percent quarter on quarter.

Off-White’s presence in the top three underscores the rise of streetwear brands within the realms of high-end fashion. According to consultancy Bain & Company, as Gen-Z consumers’ share of wallet grows, streetwear has helped boost global sales of personal luxury goods by 5 percent to an estimated total of €263 billion ($309 billion) in 2017.

Indeed, digital natives that have grown up in an era of hype-culture and product drops are the perfect conduits to build buzz online. This quarter, four of the five new entrants to the Lyst Index — Off-White, Stone Island, Moncler and Raf Simons — are right in the streetwear sweet spot, making an appearance in the top 10 for the first time.

Casual-wear brand Stone Island jumped 33 places this quarter, thanks to leaked details on its upcoming collaboration with Supreme, and the impact of Canadian rapper Drake’s decision to extensively wear Stone Island on stage during his ongoing world tour. Similarly, searches for Moncler spiked after British rapper Skepta was photographed wearing the brand's upcoming collaboration with Craig Green. 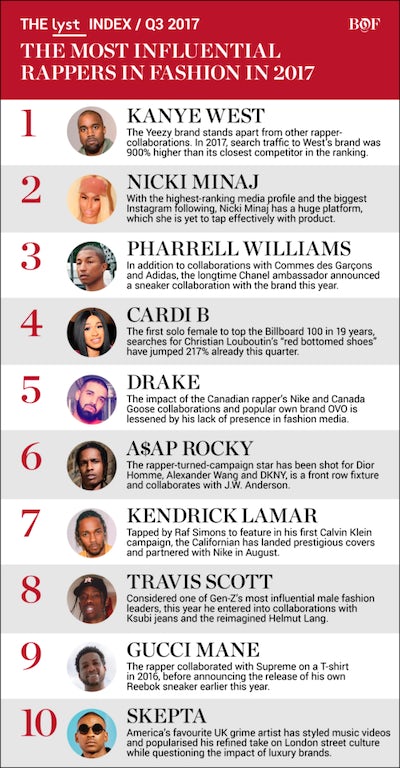 Finally, Raf Simons, who in June won both the best womenswear and menswear designer CFDA awards for his work at Calvin Klein, released his eponymous brand’s much discussed "duct tape belt" priced at £281 (about $372) in August. The Belgian designer is regarded as a streetwear inspiration by a number of influential rap artists, including Travis Scott, Frank Ocean and A$AP Rocky — in July, A$AP Rocky released a single entitled “RAF” in tribute, contributing to a 34 percent spike in Raf Simons search enquiries this quarter.

The Rising Influence of Rappers

While fashion’s relationship with hip-hop and rap first began in the 1980s, over the last decade the industry has developed closer relationships within the hip-hop community than ever before. As a result, rappers have become powerful brand ambassadors, and have a strong influence on consumer purchases.

Frank Ocean (who features on A$AP Rocky’s “RAF” track) and Kendrick Lamar have both fronted Calvin Klein campaigns. Travis Scott has worked with Alexander Wang and Helmut Lang, while A$AP Rocky has collaborated with J.W. Anderson on a capsule collection and appeared in Dior Homme campaigns. Pharrell has walked the runway for numerous Chanel’s Métiers d’Art shows and is now a co-owner of G-Star Raw, along with his own Billionaire Boys Club label, while Kanye West’s Yeezy collaboration is one of the most in-demand shoe brands in the world. Drake dropped his “Signs” single in collaboration with Louis Vuitton at the brand’s Spring/Summer 2017 menswear show and caused a 104 percent spike in searches for Moncler’s Maya Red puffa jacket with his 2015 hit “Hotline Bling,” which has now been viewed 1.2 billion times on YouTube.

To discover which rappers currently wield the greatest influence on fashion, BoF assessed editorial covers, campaigns and collaborations to shortlist 20 rappers, before using Lyst data to gauge their influence on consumers, measured through product searches driven by their music videos and consumer search traffic to their brands and collaborations. Unsurprisingly, Kanye West secures the number one spot, though not by a significant margin. Pharrell, one of a handful of male Chanel ambassadors, a major Adidas collaborator and now the part owner of G-Star Raw follows in third place, just behind Nicki Minaj. 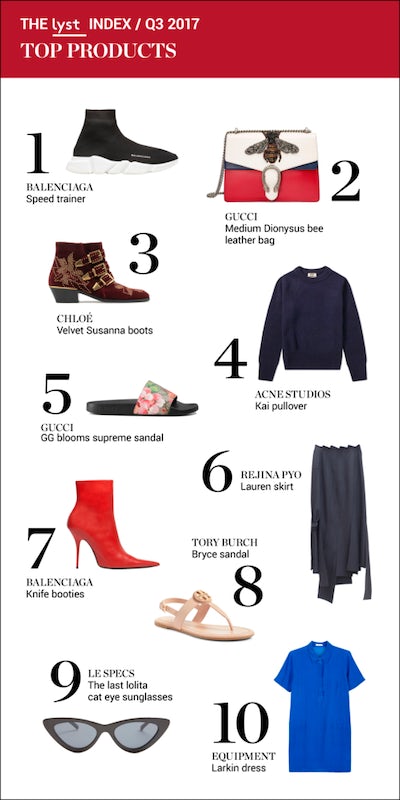 Indeed, female rappers are also creating significant media value through social media. Minaj’s social posts, and 83 million Instagram following (more than double Drake’s 37 million and eight times Pharrell’s 10 million), created more than $14 million in earned media value for brands including Chanel, Gucci and Versace, according to Tribe Dynamics. However, Minaj has yet to effectively impact the fashion industry with her own line. Her line with K Mart was shuttered this year, reportedly due to dwindling sales.

Likewise, newcomer Cardi B ranks in fourth place in our ranking of influential rappers. Despite having no collaborations or campaigns under belt, she has created an estimated $4.5 million media value in 2017 to date, and the massive 217 percent spike in searches for Christian Louboutin shoes since June is attributed to her “red bottoms, bloody shoes” hit "Bodak Yellow."

However hype doesn’t always convert into sales. Though the Balenciaga Speed Trainer, which topped the ranking in Q3, is a streetwear product, the influence of the streetwear vertical and by association rappers is far less evident in the Top Product ranking.

The ranking continues to be dominated by womenswear and is made up of the similar category mix as in Q2. Footwear continues to be the strongest category with five different pairs of shoes featured on the list, including, in fifth place, the Gucci Bloom sliders which topped last quarter’s product ranking (and were the only re-entrant).

BoF partnered with Lyst, the global fashion search platform, to analyse the behaviour of over 70 million annual consumers, shopping across the world’s largest inventory of luxury and contemporary fashion. The rankings were formulated using Google and Lyst search data, engagement statistics, conversion rates and sales. Due to exclusive vertical distribution models, the Lyst Index does not include: Chanel, Christian Dior, Hermès, Louis Vuitton, Céline and Prada. Look out for the next edition of the Lyst Index at the end of Q4.