Urban thoroughfares like Fifth Avenue and Bond Street have been hit hard by the pandemic. What happens to flagships now?

Urban thoroughfares like Fifth Avenue and Bond Street have been hit hard by the pandemic. What happens to flagships now?

Stores in prime urban shopping districts have been open for weeks, after local governments lifted lockdowns meant to curb the spread of Covid-19. But most are seeing far fewer shoppers walk through their doors. Unlike suburban malls or mostly retail neighbourhoods like SoHo, these urban shopping areas thrive on walk-ins from tourists and professionals who commute to nearby offices.

Both are in short supply these days. Air travel is unlikely to recover to pre-pandemic levels until 2024, according to an August report from the International Air Transport Association, and already companies large and small are pulling back on their office space: the US office market saw a negative change in leasing activity in the second quarter of 2020, marking the first net demand for commercial space in over 10 years, various brokerages reported last month.

Urban shopping districts “integrated with dense commercial office space,” such as Manhattan’s Fifth Avenue, “are the shopping areas that will suffer the most,” said Arun Sundararajan, a professor of Technology, Operations, and Statistics at New York University's Stern School of Business.

With street traffic unlikely to recover anytime soon, more retailers are starting to ask: Does it still make sense to operate flagships at the heart of the world’s top cities?

Even before the pandemic, retailers began to doubt the value of these marquee properties. In addition to now being mostly empty, these stores were among the biggest and most expensive locations for many brands. At its peak in 2017, the 11-block stretch of Fifth Avenue between 49th Street and 60th Street commanded north of $3,000 per square foot annually, according to Cushman & Wakefield. Rents had fallen about 16 percent by the time the lockdown went into effect in March, with roughly one in five properties sitting empty. Ralph Lauren shuttered its flagship between 55th and 56th street in 2017, and Tommy Hilfiger closed its 22,000-square-foot store at 681 Fifth Avenue last year.

If you’re a big retailer in New York being asked to pay big rents, you’d say, ‘Well, why would I even want to be here?’

In June, Valentino even filed a lawsuit against its landlord Savitt Partners in order to terminate its Fifth Avenue lease, citing a retail landscape that is “drastically, if not irreparably, hindered.” Other retailers are negotiating for lower rent or early termination of their leases, similarly arguing that the street’s appeal isn’t the same without the crowds.

“With Covid and social unrest, if you’re a big retailer in New York being asked to pay big rents, you’d say, ‘Well, why would I even want to be here?’” said Alexander Goldfarb, an analyst at Piper Sandler who covers shopping centres.

Some brands are looking beyond New York, London and other global cities entirely. They’re shifting resources to e-commerce operations and plotting out leaner store networks. That can mean reducing the number of shops in New York in favour of new locations in fast-growing cities such as Phoenix and Atlanta.

The Fifth Avenue flagships are also being reassessed to boost their appeal with New Yorkers, with an emphasis on personalised service and shopping by appointment. Less busy stores associates, for instance, can use text and email to reach their local customers about new collection launches and virtual trunk shows.

“Fifth Avenue will always be a type of aspirational shopping street and brands will want to invest and put their best foot forward,” said Chris DeCrosta, founder of GoodSpace NYC, a real estate firm that works with the likes of Glossier and Supreme. “But that doesn’t mean there should be five flagships in every city.”

The key, he said, is to “capture the customer where they are.”

In New York, trouble was brewing for the Fifth Avenue midtown district well before the global epidemic hit.

The problem, analysts say, is New York’s oversupply of retail spaces that were built in the recovery following the 2008 financial crisis. Fifth Avenue’s decades-old stores had to compete with the revitalised Meatpacking District and the Hudson Yards megamall that opened last year.

The street is still popular with luxury brands. Recent high-profile leases on Fifth Avenue include Dior’s massive new space at the General Motors building, as well as Chopard, whose flagship will relocate from Madison Avenue to Fifth Avenue’s Crown Building, WWD reported last month. Saks Fifth Avenue is among those that have doubled down on its namesake location in recent years, unveiling a $250 million makeover of the ground floor of its 650,000-square-foot flagship in spring of 2019. This flagship location then generated at least $600 million a year in sales, according to Forbes — making up about 15 percent of the department stores’ total revenue. 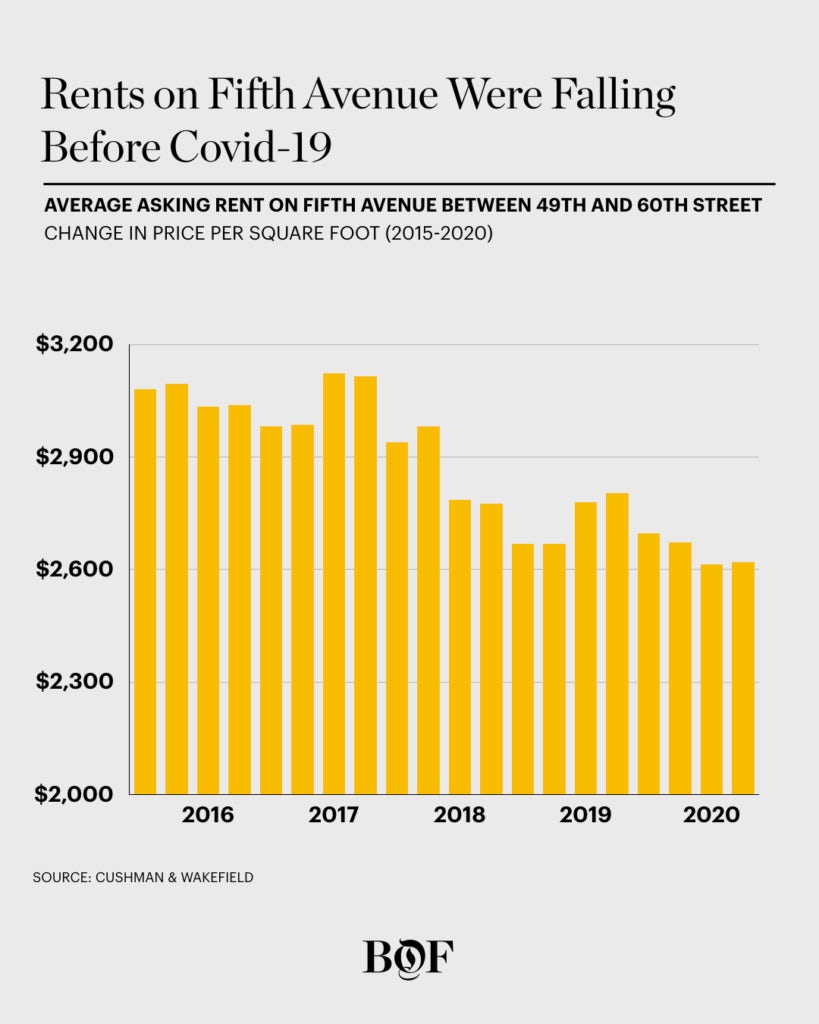 But these new tenants can't fill all the empty space on Fifth Avenue today, particularly as struggling mass-market brands look to downsize.

Bond Street and the Champs Élysées have had their own share of trouble. The latter had struggled for years as it became populated by fast-food chains and its saturation of tourists attracted pickpockets and heavy traffic. The Parisian destination has been successful in attracting new tenants in recent years, however, including department store Galeries Lafayette and Nike. Like in New York, high streets throughout London have been losing tenants for years as the city over-committed on retail, though rents on Bond Street remain far more affordable than Fifth Avenue, according to Brandon Famous, CBRE’s executive managing director and chairman of the brokerage's Global Retail Occupier Executive Committee.

Cheaper rent can justify lower sales per square foot while retailers wait for tourist and commuter traffic to rebound. But retailers are also using the pandemic to evaluate whether they can justify such a large brick-and-mortar footprint at any price.

“There’s an immediate strategy for the retailers on Fifth Avenue, which is really just survival mode — get out of their lease, or get rent abatement,” said retail consultant Robert Burke. “It used to be that business was guaranteed by the sheer number of people passing by. Obviously that’s not the case anymore.”

City retail faces another conundrum: Urbanites are migrating out of the city. In New York, about 15 percent of the population fled the metropolis between March and May, a New York Times analysis found. In June, the vacancy rate in New York’s rental market spiked to its highest point in 14 years, according to a report from brokerage Douglas Elliman.

It’s too soon to say whether these moves will become permanent. Some companies have already asked employees to come back to their Manhattan offices.

Still, second-tier cities appear poised to see an influx of new residents leaving more densely populated metropolises. A JLL report on the second quarter of 2020 shows that Atlanta, Phoenix, Seattle and Chicago top the ranking on net office space absorption, which measures supply and demand, while New York and San Francisco come in last among the top 54 markets in the US.

Brands were already expanding into these cities pre-pandemic. In January, Gucci opened its first store in Nashville. Valentino is expanding its boutique in Dallas. Retailers should consider opening stores in these smaller cities, retail experts say, but they should only do so when they have data that shows their customers live there.

“I know direct-to-consumer CEOs that can show me this kind of data in one swipe, but I’m not sure if I could say the same about” some luxury brands, DeCrosta said.

The end result, according to DeCrosta, may be fewer stores in major cities and using that capital to open smaller, more affordable locations in places like Austin and Pittsburgh. He calls it the “hub-and-spoke approach,” in which traveling shoppers interact with a brand at a flagship store on Fifth Avenue or Via Monte Napoleone in Milan, where they receive exceptional customer service, engage with the latest collection and maybe make a purchase or two.

It’s all about the evolution of reaching and touching the customer wherever they are.

The key, however, is these consumers have such a great experience at the flagship that when they go back home, they’ll either continue to patronise the brand’s regional store or shop online as a lifetime customer.

“It’s all about the evolution of reaching and touching the customer wherever they are,” said Byron Carlock, head of PwC's US real estate practice. And if a brand can save money doing so by closing stores or renegotiating leases, they must “divert that money toward e-commerce and logistics and more efficient ways of reaching shoppers," he added.

Many luxury brands were already pursuing a version of this strategy in China. Chinese consumers make up about one-third of the world’s total luxury sales, much of which happens while they travel abroad. In recent years, they have begun to spend more domestically, and brands such as Burberry have opened dozens of stores in Chinese cities. With travel from China to the US restricted during the pandemic, this trend is set to accelerate.

As for retailers stuck on empty thoroughfares around the world, there are tactics to get local shoppers in the door and to make in-person shopping comfortable and even inviting. The incentive of personalised service and shopping by appointment, for instance, can ensure that shoppers spend a substantial amount of time within the store without having to worry about contact with other people. Livestreamed shopping events with an influencer or celebrity inside a store is another option to consider, said Katrin Zimmermann, managing director of the Americas at TLGG Consulting.

The outcome of countless negotiations between landlords and retail tenants will also determine what Fifth Avenue and similar streets worldwide will look like post-pandemic. Brands that can afford a few lean years may benefit from waiting it out rather than abandoning urban shopping districts, Zimmermann added.

“Will the crisis change human behaviour for good? There’s little evidence to that prognosis,” she said. “History shows that humans enjoy density … In New York, museums and night clubs aren’t open yet, and people are hungry for experiences.”

Editor’s Note: An earlier version of this article stated that Ralph Lauren closed its flagship on Fifth Avenue in 2018. This is incorrect. It closed in 2017.

What To Do About Rent

What Luxury Can Do About the Tourism Crisis