NEW YORK, United States — Gucci’s new Soho store is built to solve a happy problem: creative director Alessandro Michele’s collections are wildly popular with the young shoppers every brand craves. But with the rise of marketplaces like Net-a-Porter, many of those consumers are increasingly content to buy without ever setting foot in a physical store.

In an interview, Gucci chief executive Marco Bizzarri called the conception of millennials as an online-only generation an “oversimplification.” He said shoppers are equally bored by traditional stores and bland websites. Thus, the store at 63 Wooster Street, which opens Sunday, represents the brand’s attempt at a departure from the fusty trappings of luxury shopping — if not the prices.

Gone are mainstays like the intimidating black-suited security guard on the street and the separate sections for accessories and pricier items like jewelry. Those details are “snobbish” and create distance between a brand and its customer, said Bizzarri.

In their place are “connectors,” store associates hired for their ability to tell Gucci’s story. The centre of the nearly 10,000-square-foot space is dotted with sofas for admiring the merchandise, sneakers and dresses democratically mingled together along the original exposed brick walls. Bright lighting and riotous colours reflect Michele’s aesthetic, while video installations and reprinted copies of a 1985 issue of Interview magazine featuring Madonna nod to New York’s pre-gentrified heyday. 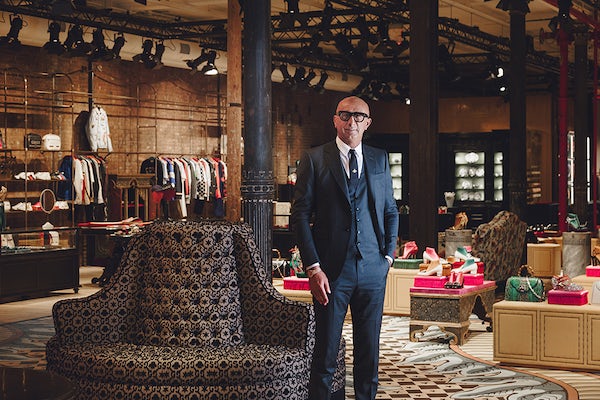 The eclectic vibe is meant to evoke the thrill of discovery. It’s Gucci’s spin on “experiential” retail, where brands try to give customers a reason to come out to the store instead of shopping online (or spending their money on restaurants and travel instead).

“It’s the idea of a candy shop,” Bizzarri said. “You come, you pick, you enjoy.”

The company had been eyeing Soho for a while and put the store into development about 18 months ago. Gucci signed a two-year lease, shorter than the usual five or 10 years in retail, with an option to extend if the format proves successful, The Real Deal reported in October. Bizzarri said he’ll determine the success of the store partly by instinct — namely whether he and his customers feel a stronger connection to Gucci inside. Certain elements, like the connectors, might quickly find their way into other locations if they prove a hit here.

The challenge now is to keep up that torrid pace. Gucci’s new Soho store is part of a larger bet on brick-and-mortar retail at the brand. The company is refurbishing its roughly 520 locations to reflect Michele’s aesthetic, a process that is about half done and will take another two to three years to complete, Bizzarri said. The company plans to hold its total number of stores steady.

Gucci is giving its stores a refresh at just the right time. Global e-commerce juggernauts like Farfetch and MatchesFashion are soaring, a trend that is particularly acute with young consumers who drove 85 percent of growth in luxury spending last year, according to Bain. A separate survey by Accenture found over 40 percent of Generation Z buy more than half their apparel online.

Bizzarri said he wanted the store to feel “inclusive,” with customers encouraged to handle merchandise themselves or just spend time inside, even if they don't buy anything. Customers can listen to a house music documentary on custom-made cat-eared headphones, check out a preview of an upcoming collaboration with Dapper Dan or use augmented reality to design their own bag or shoe.

But in-store experiences aren’t a panacea. Before Gucci took over the space, 63 Wooster Street housed an Anthropologie, the womenswear chain that was an early pioneer in turning its shops into inviting destinations. But the chain’s sales have slipped in recent years, which some analysts attributed to prioritising innovative store concepts over staying on top of fashion trends.

With so many brands trying out "experiential" retail, the key to standing out is to create “meaningful moments” that go beyond a single transaction or an Instagram post, said Bart Higgins, a partner at ?What If!, a retail consulting firm. “[Shoppers] are going to start realising these things going on in stores are just marketing efforts,” he said. “Consumers are quick to catch onto this stuff. One of the ways to avoid that fatigue is to allow the consumer to have control.”

So at Gucci, the goal is to create an impression that sticks with shoppers long after they leave 63 Wooster Street, Bizzarri said. “If you go out and you feel the energy and you feel the passion you want to have with Gucci, the customer is becoming loyal,” he said. “You want the buyer to be free to visit and to experience something they cannot at other shops.”