NEW YORK, United States — Halloween is a holiday on the rise. Over the last decade, combined consumer spending for Halloween has grown 12 percent year-on-year, according to the National Retail Federation. This year, it is predicted to reach an all-time high of $8.4 billion, up from $3.3 billion in 2005. Consumer participation is increasing too: more than 171 million Americans — almost 70 percent of the population — are predicted to celebrate Halloween this month, spending an average of $82.93 each.

This explosion in consumer spending can be attributed in part to the holiday’s growing popularity among adults. No longer just a chance for children to go trick or treating, in recent years increasing numbers of adults have adopted Halloween as an opportunity to dress up and host parties. “Halloween is no longer a holiday just for kids or for adults with kids … The millennial group is one of the biggest spending groups right now — they’re coming into their peak consumption years and they’ve really taken on Halloween,” says Elley Symmes, grocery analyst at Kantar Retail.

Social media has also played a role. For many millennials nowadays, “there’s a sense that if it’s not Instagrammed, it didn’t exist,” explains Robert Burke, chairman and chief executive of consultancy Robert Burke Associates. Halloween’s emphasis on dressing up, decorating and hosting costumed parties is well-suited to image-heavy social media platforms, where consumers can showcase how much Halloween-themed fun they’re having. “It’s an opportunity to do some kind of unusual and interesting post … This is a format and a platform for a good Instagram photo,” continues Burke.

Millennials are coming into their peak consumption years and they’ve really taken on Halloween.

“[Consumers] are spending in moments of time where they can be a little bit more experiential, where they can showcase how much they’re enjoying themselves and Halloween is definitely one of those,” says Ana Serafin-Smith, senior director of media relations at the NRF. “[It is an] opportunity for you to go shopping and then use whatever you bought to celebrate that moment and showcase it again, with all your friends and family.”

“It makes sense — the consumers are very savvy shoppers. The majority of those are millenials, they grew up in the recession era so they’re always looking for the best deals,” says Serafin-Smith. 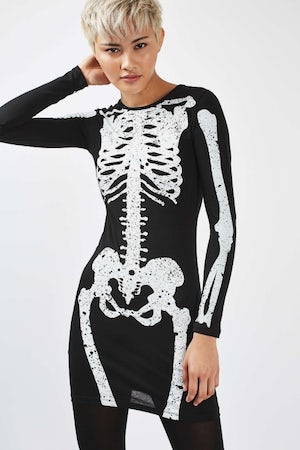 “This is a disposable product, so consumers are not necessarily looking to go out and buy an overly expensive product,” adds Marshal Cohen, chief industry analyst at NPD Group.

By comparison, traditional retailers like department stores have done less business around Halloween. Indeed, the NRF’s survey revealed that just 23.4 percent planned to shop at a department store and only 10.2 percent at a fashion store.

In part, this is because these retailers have paid less attention to the holiday. Although Halloween is now the eighth largest consumer holiday in the US, it still lags behind spending stalwarts such as the “Holidays” period, “Back to School,” Valentine’s Day and Mother’s Day.

“Retailers are spending the majority of their time on the seasonal moments where they can get the most money out of consumers … [Halloween] being a one day event and being more fun, there’s not really an emotional connection compared to some of the other holiday seasons. It means it can fall a bit lower,” says Serafin-Smith.

“Traditional department stores haven’t actively participated as much as you’d think they would … They’re probably not doing everything that they could to engage shoppers there,’ says Tiffany Hogan, senior analyst, US apparel, Kantar Retail.

However, at a time when many traditional retailers and department stores are suffering from depressed spending and declining footfall — despite a relatively robust American economy — the enthusiasm and spending power surrounding Halloween offers an opportunity to connect with customers, get them into stores and establish an ongoing relationship.

“This is the kind of thing that the stores have recognised … You can make money out of it, it’s short term and it creates spirit and drives traffic into the store, which is the number one key thing that brands and retailers are trying to do and that is generate consumer interest,” says NPD’s Cohen.

While some department stores, such as Barneys, still aren’t doing anything specifically for Halloween, this year many are getting more involved in the holiday. As well as stocking a small selection of adult and children’s costumes, Macy’s is hosting its first-ever Halloween pop-up, a 1,400-square-foot space at its Herald Square flagship, in partnership with home décor retailer Grandin Road. Bloomingdales is offering Halloween makeup consultations with MAC and pumpkin culinary sessions with Le Creuset at selected stores, while Neiman Marcus and Nordstrom are both stocking a selection of Halloween-themed décor and candy.

Traditional department stores haven’t actively participated as much as you’d think they would.

“[Halloween] used to be something that, ‘Ah, it’s not big enough, let’s not worry about it … Nowadays, every month is a Hallmark holiday in retail. They’re looking for every single growth opportunity in every single month,” says Cohen.

However, department stores should not try to compete with discount and specialty stores, many of which have successfully positioned themselves as “one-stop” Halloween shopping destinations by offering the consumer such a comprehensive product selection.

“We probably have 10,000 SKUs of various Halloween merchandise,” says Michael Long, president of Ricky’s NYC, a beauty and hair retailer that operates three Halloween pop-up stores in New York. “Consumers know that a place like Ricky’s is a destination for Halloween, so you can get everything you need, from a wig to eye makeup to a costume or accessory. You can’t necessarily get fake blood or a scar from Macy’s.”

They can also reinvigorate product categories they are already established in with the Halloween spirit, such as décor and home entertainment, Hogan advises. “Kind of leveraging what they already have in a curated way to be able to bring that Halloween idea out in their assortment, rather than trying to invest in all the extras that would be needed to make it that one-stop shop,” she explains.

For fast fashion retailers like H&M, Forever 21 and Topshop, which are able to move quickly in and out of product categories, creating specific Halloween merchandise is a more viable strategy. Indeed, many of these retailers are offering themed accessories and low-price point fashion items for the holiday. Topshop’s online Halloween shop includes glittery bat masks, lace bunny ears and temporary ghost tattoos, alongside a curation of the store’s normal merchandise, such as velvet body-con dresses and black lace slips.

“They’re just accessories, it’s not like they’re going [for] full-out costumes … They’re going after that younger crowd — even though they are spending more on Halloween, some of them may not want to spend as much on the actual outfit, but focus more on the entertainment factor,” says Hogan.

Robert Burke agrees: “It’s an opportunity to offer emotional, impulsive, fun product for customers to react to … It’s fun, it’s unique and right now the retailers will do whatever it takes to get the customer excited and in the store and spending.”