LONDON, United Kingdom — For years, brides-to-be have spent large sums of money on wedding gowns, for what some would call the most important day of their lives. Now, more and more brides-to-be are turning to lower-price alternatives from their favourite high street retailers.

“Much like fast fashion has permeated the casual-wear market, many non-luxury stores are expanding their lines to include fashion-forward wedding designs at a favourable price point,” says Britanny Carter, retail sector analyst at IbisWorld, a research firm.

J. Crew was one of the first high street retailers to spot an opportunity in bridal-wear. In 2004, the American retailer launched its first bridal range online, consisting of two wedding gowns and 12 bridesmaid dresses. Today, J. Crew’s offers dozens of $3,000 to $4,000 wedding gowns, as well as unconventional bridal styles like sequined shorts and floral rompers, and operates a stand-alone bridal boutique on New York’s Madison Avenue. Anthropologie launched online bridal retailer Bhldn in 2011, offering wedding dresses from $1,000 to $4,000, before opening a dedicated bricks-and-mortar boutique in New York in 2014. 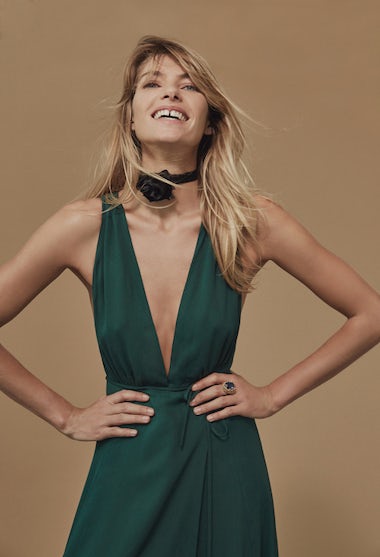 But it’s not just large players who have been tapping the opportunity. Needle & Thread, founded in 2013 by former All Saints and Karen Millen designer Hannah Coffin, has developed a collection of contemporary bridal gowns, ranging from £105 to £850 (about $160 to $1,300), to be sold exclusively at Net-a-Porter, starting in December. Meanwhile, start-up label Reformation, which launched its first bridal range back in 2014, with gowns starting at $518, now has four bridal collections and has seen average weekly sales for its bridal-wear double from 2014 to 2015. In addition, Han Chong, the founder behind contemporary label Self-Portrait, revealed he too would soon be launching a bridal line.

“There’s such a void in the mid-range bridal market right now and girls are skewed to shopping for things that are cheap and a total one-time wear, or super high-end and unnecessary for the occasion,” says Yael Aflalo, Reformation’s founder and chief executive officer. “We really wanted to create things that we would actually wear to a wedding — whether our own or someone else’s — that didn’t feel stuffy and that let us have fun.”

Asos, the newest accessibly-priced entrant to the market, is set to launch its first-ever bridal collection in March 2016, offering 18 contemporary designs — such as two-piece co-ordinates, cape-detailed jumpsuits and 3D ivory lace gowns — all of which will cost no higher than £250 ($380). “We launched a bridesmaid collection last year, aimed at the twenty-something customer. It was hugely successful, so bridal-wear was the natural next step,” says Vanessa Spence, design director at Asos, adding: “People want something that offers great value for money."

According to specialist research firm The Wedding Report, average spend per wedding in the US was $26,444 in 2014, including everything from attire to venue to flowers and food, up from a 2012 average of $25,656. Yet, almost 50 percent of newlywed wives say they spent under $500 on their gown. Indeed, a study released by bridal chain David’s Bridal found that 50 percent of brides-to-be consider it a priority to spend less than $800 on their dress, while 54 percent of women said a designer dress wasn’t important to them. 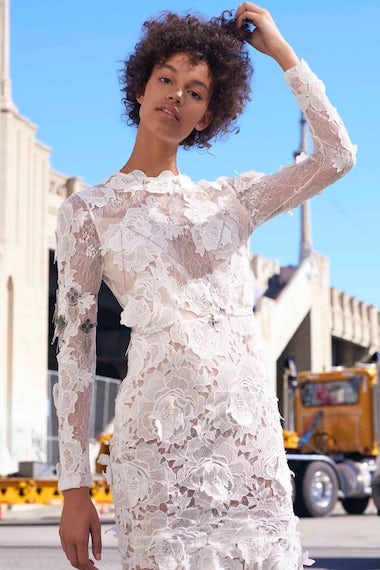 “How couples think about spending, and the value they place on the dress as well as certain services like music, photography, video, invitations and flowers has changed,” says Shane McMurray, founder and chief executive officer of The Wedding Report. And even before the event itself, couples are living together, waiting longer to get married and spending less money to do so, she says. “They are a bit wiser about how they spend.”

“Gone are the days when the father of the bride paid for everything,” adds Bryony Toogood, fashion director of Brides magazine. “Today, many couples are paying for the wedding themselves and have to seriously consider their spend on the dress, especially with all the associated wedding costs for receptions, parties and catering spiralling year-on-year.”

“This is a chance for [non-bridal] companies to tap into their brand recognition and generate additional revenue from their existing customer base,” she continued. “Most consumers aren’t familiar with wedding gown brands, plus the high street can move faster to follow trends than a bespoke wedding dress designer. This is an ideal opportunity for them to capture budget-conscious brides.”

“Bridal — and weddings more broadly — have gone through a major transformation lately,” adds Marshall Cohen, chief industry analyst of NPD Group. “The majority of those getting married are millennial-aged [who] prefer the experience [of a wedding] and the sharing of it with the world. This means shifting spend to more experience and less extravagance. Spend more on the place or the travel and the band, and less on the flowers and the dress. After all, the dress is just for her to keep — and for the groom and others to see for a short time — but the event itself lasts a lifetime of memories.”